Rachel Sykes’ much-needed monograph, The Quiet Contemporary American Novel (TQCAN) compellingly argues that there is a vein of quiet that runs through American literary canon and remains prevalent in contemporary US culture.

This book explores ‘quiet’ as a narrative concept in contemporary US fiction. In her thorough development of the term, Sykes gives us an idiom for a narrative aesthetic that is motivated by values of contemplation and characterised by its interest in the lives of introverted scholarly characters. The book’s main contention is that in ‘quiet’ fiction, there inheres a reflective dynamism and a potential for protest that often goes unnoticed. As Sykes rightly identifies, US literature is littered with such ‘quiet’ fictions; she notes that since Hester Prynne and Bartleby, American writing has portrayed introverted characters as a disruptive presence. Turning first to the European Modernist novels of consciousness by writers such as Marcel Proust and Virginia Woolf, Sykes’ book traces a genealogy of this neglected quiet aesthetic in the Western literary tradition before moving onto its primary object of study, contemporary American fiction. It draws together analysis of works by Marilynne Robinson, Paul Harding, Richard Powers, Lynne Tillman, Teju Cole and Ben Lerner in an attempt to refute the assumption that quiet necessarily means quietism.

One of the features that TQCAN identifies in the ‘quiet’ novel is a lack of narrative event. In a particularly convincing chapter on noise and fiction that ‘stands apart’ from the book’s main textual analysis, Sykes defines her quiet aesthetic against the loud, swaggering convolutions of the postmodern novel. The book draws its argument, in part, from a disavowal of the critical equation of a peculiarly American modernity with noise. In relation to this, Sykes offers some sharp observations on the effects of reading an existing body of 9/11 fiction as a trend, period or genre. She argues that the clamouring authorial responses to the attacks, evidenced by a proliferation of essays by well-known authors – for example Joan Didion, Martin Amis and Jeanette Winterson – in The New York Times before the end of September 2001, deny readers the opportunity of reflection, and instead further the current cultural view that modernity is concurrent with noise. In contrast to this, TQCAN argues that quiet texts should be freed from the expectation to narrate current events. The texts that Sykes considers are marked by a lack of narrative action; they unfold the minutiae of ordinary lives, their drama born from internal reflection rather than lively plots. In this way, Sykes’ book is contiguous with the ethics of ‘recessive action’ that Anne-Lise François, in her influential book Open Secrets: The Literature of Uncounted Experience (2009), identifies within a broadly conceived category of Romantic literature. Though TQCAN does not engage with François’ work directly, Sykes’ comments on the ethical productivity of a freedom from narrative action bears many similarities to her work. Sykes, in opposition to François, allows for reflexivity to be politically productive as well as ethically motivated. She locates a potential for protest in the narration of ‘nothing’ where the earlier book wants to free texts from political work.

Contemporary American literature has, in recent years seen a turn to the personal. Sykes argues that ‘quiet’ fictions offer ‘an interior mode of discussion, a discrete articulation of selfhood and […] a resonant way of processing and paying attention to the present’ (2). As such, her book contributes to the current critical interest in the intersection between the personal and the political. The ascendant genre of autotheory by writers such as Chris Kraus and Maggie Nelson is also comprised of extensive self-examination and the privileging of the unremarkable details of everyday life. However, Sykes’ textual focus on introversion offers an alternative to the aesthetic of oversharing and noisy self-proclamation that defines the politics of these works. In seeing the drama of internal reflection as a form of protest, TQCAN makes a welcome contribution to our understanding of the ways in which the personal can be political in more discreet and unassuming ways. Though she is keen not to exaggerate this potential, in her analysis of the figure of the flaneur in Cole and Lerner, Sykes interrogates the implications of race for the ability to attain ‘quiet’ and concludes that it is a privileged state. She also alludes to gendered responses to plotlessness and narrative uncertainty, comparing the reception of works by Cole and Lerner to those by Kraus and Sheila Heti, though this is not examined in any great detail and Sykes’ own choice of texts furthers this critical attitude to some extent.

TQCAN offers a fascinating intervention into the aesthetics of contemporary US fiction. At times it overstates the status of ‘quiet’ as a neglected aesthetic in American literature. Though the author traces a ‘quiet’ aesthetic in canonical American prose works, such as those by Hawthorne, Melville, Emerson and Thoreau, she neglects to mention the fervent presence of this in American poetry. Perhaps an engagement with François’ book would have drawn this out, given its focus on one of America’s foremost literary introverts, Emily Dickinson. Indeed, Robinson and Lerner’s indebtedness to this poetic tradition warrants its inclusion. Nevertheless this is an important and ingenious book that draws together disparate authors to reveal and enlighten a prominent strain of contemporary American fiction. The book’s most valuable contribution is in furnishing us with an idiom for discussing narratives that value the often unnoticed or derided attributes of reticence, gradualness and of course, quietness. 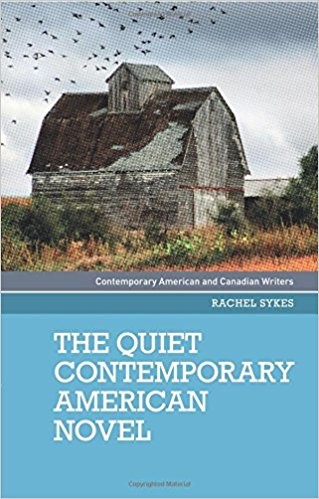 Georgia is a PhD candidate at the University of Leeds. Her research examines the formal and political legacy of nineteenth century Transcendentalism in contemporary American fiction, memoir and poetry. Her interests lie in the continuing political, ethical and literary relevance of transatlantic Romanticism and nineteenth century aesthetics in the twentieth and twenty first centuries.
View all posts by Georgia Walton →
Tagged  C21, Comparative Literature, Contemporary Fiction, Literary Merit.
Bookmark the permalink.