The word ‘disco’ refers to several things, both the genre of music which the OED describes as ‘strongly rhythmical pop music mainly intended for dancing’ that was ‘particularly popular in the mid to late 1970s’, to the nightclub or dance-hall venue where such dancing takes place. But it also describes a sensibility, an adjective conjuring up numerous erotic or musical or sartorial associations, or particular figures from its scene, perhaps least fortunately the image of John Travolta in flares that has become the lingering symbol of its populist zenith (and thus perhaps its nadir.) The expertly curated ‘DISCO! An Interdisciplinary Conference’, recently held at the University of Sussex and co-organised by Arabella Stanger, Michael Lawrence and Mimi Haddon, drew much of its strength from the way this central word moved between these states of description, offering a portrait of a musical form that is also a way of life, an aesthetic that characterised an epoch. It yielded fresh and nuanced definitions not by presuming a square one from which to determine what disco is or isn’t, but by allowing the sheer variety of approaches within and throughout the panels to speak for itself, lighting upon paradigms new and old. 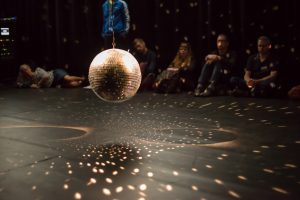 A recurring topic,  the relation between disco and corporeality, was introduced from the get-go in Melissa Blanco Borelli’s (Royal Holloway) opening keynote. Dancing her way on to the auditorium stage, Borelli coined the term ‘diva disavowal’ to describe the way in which a number of disco divas eschewed commidifying expectations of the black female body as overtly sensual and fleshly. Donna Summer’s robotic arm movements in a live television performance of her 1975 hit ‘Love to Love You Baby’, for example, were discussed as a way of dancing against the grain of that song’s burlesque eroticism. Summer’s ‘diva disavowal’ brings to mind the theoretical work of another Donna, Donna Haraway, whose Cyborg Manifesto conceives of the robotic as a challenge to patriarchal notions of embodiment and the deterministic identificatory categories which come with them. Another kind of bodily mechanisation was echoed in a paper by Michael Lawrence (University of Sussex), who considered the influence of disco upon the 1980s cult of aerobics, in which dance was less an exercise of resistance than of physical self-improvement, a reminder of the ways that disco can come to discipline bodies as much as liberate them. The matter of bodies in space, whether coded as the work of live performance,  physical exercise, or the leisure of dancing at the discotheque, is of course a resolutely political one. In her account of divas Borelli drew upon Lauren Berlant’s notion of ‘diva citizenship’, the ‘moment of emergence that marks unrealized potentials’, one in which a person ‘stages a dramatic coup in a public sphere in which she does not have privilege’, and her tearful conclusion made evident the pertinence of these considerations to the contemporary moment, in which geopolitical borders and the safety of bodies of colour are at their most vexed. 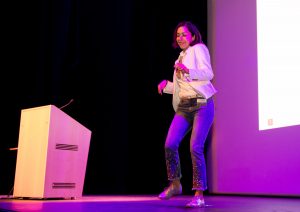 The corporeality at play in disco, then, is always also in relation to sociality. A number of papers considered the notion of dance as an expression of citizenship, like the National Tea Dance explored by Louis Niebur (University of Nevada, Reno), a disco organised by gay liberationists in 1976 that occurred simultaneously in venues across the country and sought to forge, however evanescently, a national gay identity. This dance was inspired by the weekly Tea Dances on Fire Island, a locale which loomed large in proceedings. Craig Jennex’s (University of Regina/McMaster University) paper suggested  that dancing today in historical gay disco spaces like the island’s Blue Whale is a mode of re-performance, a form of what Elizabeth Freeman describes as ‘temporal drag’, a temporal crossing in which dancers performatively inhabit the historical past and in so doing bring queer legacies into the present. Songs, too, were seen to narrate or speak for communities. John Richardson (Loughborough University) and Stephen Woodward (Independent Scholar) homed in on the way that disco’s aversion to, and anxiety about, the drudgery of everyday life and the grind of the city are enacted musically both in lyrics and melodic features of composition. More recent songs analysed by Jaap Kooijman (University of Amsterdam), including Janet Jackson’s 1997 hit ‘Together Again’, were seen to engage in an elegiac mode of citizenship, another kind of temporal drag, in which music is imagined as heaven, a coming together with ancestors and loved ones lost to the HIV/AIDS epidemic. 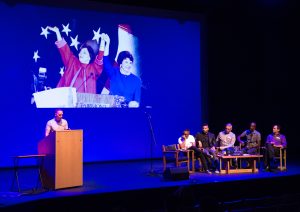 Alongside these close analyses of particular songs and performers, which included a rich and poignant panel on Sylvester, were papers that touched upon disco’s influences and afterlives. It was here that the genre was revealed at its most mutable, informing early hip-hop (Laura Nash, Fairfield University and Andrew Virdin, Independent Scholar), boogie (Chelsea Adewunmi, Princeton University), modern funk (Jared Gampel, University of California, Santa Cruz) and even post-punk (Mimi Haddon, University of Sussex). Haddon’s paper discussed the friction between disco’s association with a racialized body, dancing with finesse, and the failure or awkwardness of the white performing body in post-punk bands like Public Image Ltd, who nonetheless avowed disco’s influence upon their work. In widening the parameters of the form’s roots and legacy, these papers spoke to a wider sense running throughout the conference of the counter-narrative as a form of critical or historiographical practice. Tim Lawrence’s keynote offered a riposte to numerous assumptions about the history of disco, such as the date of its near-death (1984, not 1979), but also about our picture of the 1970s and 80s more generally. Lawrence followed the undulations of disco culture to nuance the picture we have of the 80s as the apogee of individualism, in which, the story goes, artists jumped readily into bed with neoliberalism, and in turn reframed the 70s as a period of rich ‘postindustrial creativity’ in which disco was nothing less than a form of counterculture, an intricately constructed scene offering a home for the dispossessed. Alexin Tenefrancia (New York University) brought these ideas right up to date in her account of QTPOC nightlife spaces in contemporary Brooklyn, stating in no uncertain terms that these spaces are forms of community-building, that nightlife itself is nothing less than a form of art practice.

The final roundtable on the subject of women and girls fantasising through disco, chaired by Arabella Stanger (University of Sussex), crystallised many of the conference’s running themes. Woven throughout with personal reflections from its participants, it opened out discussions to consider the status of women, girls and femmes in disco culture along with the numerous exclusions we risk when not approaching the subject intersectionally. It was a stroke of genius to include the perspective of seventeen-year-old Anika Vajagic, who spoke eloquently about the role disco does and does not play in her own experience and that of her friends and peers, a legacy that is implicit but perhaps unspoken in contemporary youth culture. Her closing thoughts, in which she discussed the importance of disco not just as a space of dance, or music, but crucially of ‘hanging out’, neatly echoed the overriding sense of disco as a meeting-point, traversing different disciplines and experiences. As a complex and enduring subject of scholarly concern, then, this conference made clear that disco – whose ‘death’ was being proclaimed so soon after its birth – is more than hanging in there.

Jack Parlett is a PhD student in English at Gonville and Caius College, Cambridge. His project focusses on gay cruising in the work of Walt Whitman, Frank O’Hara and David Wojnarowicz. He has a piece forthcoming in a pamphlet on Walter Benjamin’s Arcades Project (co-written with Anne Stillman), and has also written reviews for Dazed & Confused, The Inkling and the Cambridge Humanities Review. He has also published poems in Blackbox Manifold and the BFI Flare Zine. In October 2018 he will take up a Junior Research Fellowship at University College, Oxford to work on a literary history of Fire Island.
View all posts by Jack Parlett →
Tagged  C20, Dance, Disco, Gender and Sexuality, Music, Popular Culture.
Bookmark the permalink.