De Montfort University: Review: ‘It Is True, We Shall Be Monsters’: New Perspectives in Science-Fiction, Horror, and the Monstrous On-Screen

Review: ‘It Is True, We Shall Be Monsters’: New Perspectives in Science-Fiction, Horror, and the Monstrous On-Screen, De Montfort University, 13 June 2018 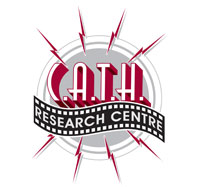 With 2018 marking the bicentenary of Mary Shelley’s Frankenstein – often cited as the first science-fiction novel – the Cinema and Television History (CATH) Research Centre’s seventh annual postgraduate conference at De Montfort University was particularly timely. Indeed, the genres of horror and science-fiction have enjoyed recent critical and commercial successes, such as Black Mirror (2011-), Stranger Things (2016-), and The Shape of Water (2017). Consequently, the main aim of the event was to ‘re-consider, interrogate and offer new approaches to the genres of Horror and Science-Fiction on screen’.

In the opening panel ‘Reinterpreting Women in Horror’, speakers highlighted numerous shifts regarding gender in horror. Gabriela Zogall’s (University of Birmingham) discussion of female agency in Drag Me to Hell (2009) blurred divisions between the roles of victim and victimiser, and Adam Herron (University of East Anglia) called for new methodological approaches to horror, using It Follows (2014) to challenge the relevance of Carol Clover’s ‘final girl’ theory in contemporary releases. In her debut conference paper, Amy Harris (University of Southampton) gave a comparative study of motherhood in The Exorcist (1973) and The Babadook (2014), positioning the single female parent as a threat to dominant gender norms. Panel chair Becky Jones (De Montfort University) connected all three papers through the concept of postfeminism, with the struggle of ‘having it all’ represented through precarity, tensions between public and private life, and new emphases on individualism and empowerment. Throughout, greater representation of women in the horror film industry was raised as an important issue, with female-fronted media not always assuring values of equality. 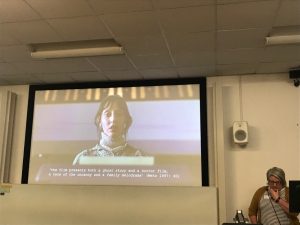 Dr Laura Mee presented findings on The Shining and its relevance in debates on ‘elevated genre’.

New perspectives on the vampire, the werewolf, and the zombie were offered during the ‘Classic Monsters Reinterpreted’ panel. Kieran Foster (De Montfort University) shared data on shadow cinema economies from the Hammer Script Archive, revealing new findings on the company’s unmade Dracula films, while Craig Ian Mann (Sheffield Hallam University) moved away from existing psychoanalytic readings of the werewolf, using The Howling series (1981-2011) to highlight connections between lycanthropy and the climate of Reagan-era America. Fusing drama studies and media studies, Kieran Sellars’ (De Montfort University) presentation on the performance art installations of Martin O’Brien evoked a reconfiguration of the zombie as queer, as well as a conduit for O’Brien’s life with cystic fibrosis. Reinvention and innovation characterised the panel, with new perspectives on horror’s iconic monsters facilitated by interdisciplinary approaches and the interrogation of extant scholarly thought.

Two De Montfort University alumni returned to Leicester to deliver the event’s keynote speeches. Dr Laura Mee’s (University of Hertfordshire) paper ‘Looking Up at the Overlook: The Shining as a Spectre of ‘Elevated Genre’’ positioned The Shining (1980) as a precursor to recent debates on ‘post-horror’ and rejection of the horror label. Mee proposed that the film’s resistance to categorisation and dual identity as high and low cultural product has been replicated in the distribution and reception of new films, such as Get Out (2017), A Quiet Place (2018), and Hereditary (2018). Dr Johnny Walker (Northumbria University) considered the industrial history of horror video cassettes in his paper ‘Splatter in the Living Room: Fangoria and the Origins of Made-for-Video Horror, 1982-90’. Walker mapped the ways in which distributors capitalised on direct-to-video (DTV) products through the phenomena of shot-on-video horror, self-reflexive marketing strategies via fanzines and video sleeves, and accentuation of the cult and trash status of DTV media. Both keynotes offered valuable insight into the importance of retrospective cognisance when tracing new generic and industrial developments, advocating historical contextualisation in the work of emerging scholars. 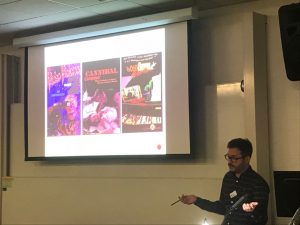 The final panel of the day ‘Sci-Fi, Horror, and the Body’ sought to explore notions of monstrosity through the subversive aesthetics of drag and corporeal preoccupations with otherness. Valeria Villegas Lindvall (University of Gothenburg, Sweden) gave an enlightening case study of the Boulet Brothers’ YouTube reality show Dragula (2016-), discussing how the series’ emphasis on transgression and shock has queered the drag queen’s associations with high camp and glamour. Eddie Falvey’s (University of Exeter) humorously titled paper ‘‘Monstrous’ Sex: From Fish Penis Fandom to Conspicuous Corporeality in Contemporary Body Horror’ highlighted the rise of sex toys inspired by film characters such as The Shape of Water’s Amphibian Man and The Avengers’ (2012-) Hulk, suggesting new fascination with non-normative bodies and a shift towards liberalised mainstream attitudes about masturbation. Both papers worked to shed light on taboo-breaking in relation to popular tastes, with changing sexual politics evidenced in the low-budget production values of Dragula and the Oscar-winning credentials of The Shape of Water. 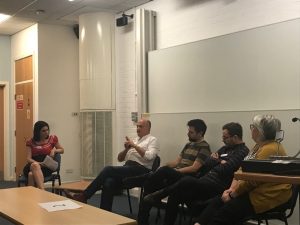 A major theme was the evaluation of methodological trends in new scholarship, with panellists identifying the necessity of increased archival and empirical research in future approaches. Whereas Jones and Hunter questioned the value of interpretative research methods such as textual analysis, Mee argued in support of the framework when combined with historical contexts of production, distribution and reception. Equally, Walker maintained that a recurring pitfall of archival research is the fetishisation of organising historical accounts in linear fashion, thus misrepresenting complex media histories as sequential events. New patterns of consumption, such as streaming and video on demand, were discussed as highly beneficial for producers of marginal content such as DTV media, yet it was also acknowledged that the standardisation of the ‘picture tile’ layout has resulted in further uniformity, marking a departure from the differentiation afforded by posters and video sleeves. Evaluating the collapse of barriers between film academia and film fandom, Walker contended that academia should always aim to retain a level of objectivity. Contrarily, Mee proposed that academics may enjoy the nature of their research and recognise problematic elements from a critical distance, while Hunter defended the need for fan-oriented critiques in light of increasing political correctness in the film industry and academia.

On the whole, ‘It Is True, We Shall Be Monsters’ delivered its primary goal of cultivating fresh debates on the genres of horror and science-fiction, with an impressive body of research accumulated throughout the day. As an event independently coordinated by the CATH Research Centre’s postgraduate students, the organisers are to be commended for their hard work and professionalism. In light of the growing popularity of De Montfort’s annual postgraduate conference, the organisers of next year’s proceedings may consider expanding the event to two days, in similar fashion to Sheffield Hallam University’s ‘Fear 2000’ conference. Following this year’s event, the CATH Research Centre has demonstrated the fertility of horror and science-fiction as avenues of inquiry, as well as the importance of revised perspectives in the curation of new scholarship.

Review: Investigating Identities in Young Adult (YA) Narratives
May Day and the future of workers’ internationalism
Review: The Half-Life of Philip K. Dick