Using primary sources from Popular Culture in Britain and America, 1950-1975 - an Adam Matthew Digital Collection: Fag Rag and Gay Radicalism in the 1970s

This is the tenth and final post in a special series exploring and discussing artefacts from a selection of Adam Matthew Digital collections. This article uses primary sources from the Popular Culture in Britain and America, 1950-1975 collection, which can be accessed here.

In the late 1960s and 1970s the radical gay press publications in the United States pushed the boundaries of acceptable journalism. Writing about controversial topics such as the age of consent, incest, bestiality and prostitution, the radical gay press not only horrified heterosexual society, but also alienated vast sections of the gay community. In contrast, the homophile press which had existed since the 1950s with newsletters such as One and The Ladder, often encouraged integration, accommodation and emulation of heterosexual society to elicit acceptance. The radical gay press, published in the wake of the Stonewall Uprising in June 1969, unapologetically asserted a gay and lesbian voice. Militant newsletters such as Fag Rag, GAY, and The Effeminist, all featured in the Popular Culture in Britain and America, 1950-1975 collection, appealed to radical gay liberationists throughout the United States.

By the early 1970s, radical gay newsletters were appearing in cities throughout the U.S. In Boston in 1971, a loose collective of men and women known as Gay Male Liberation and Gay Female Liberation founded Lavender Vision, a collaborative endeavour with half of the newspaper devoted to lesbians and the other half dedicated to gay men. This utopian effort quickly dissolved, and in its place emerged Fag Rag, a revolutionary newspaper focusing on the joys and perils of gay male life. Written and edited by gay writers such as Charley Shively and John Mitzel, the newsletter espoused radical leftist views. 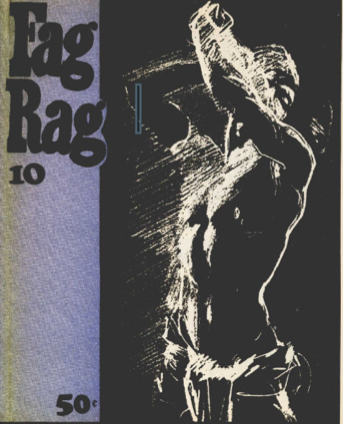 As collective volunteer efforts, many gay liberation newsletters were short- lived. Although ephemeral, the newsletters served an important purpose: highlighting gay experiences, promoting gay liberation campaigns, and fostering a gay community. Fag Rag was published so intermittently, and its survival was so dubious, that the editors refused to accept subscriptions stating that “when, if ever” it became organised, Fag Ragwould offer subscriptions [1]. The newsletterpublished sporadically until its end in the early 1980s. Shively claimed that during the early 1970s between 400 and 500 men subscribed to the newsletter, while editors distributed or donated 4,500 copies to newsstands, bookstores, organisations or prisoners [2]. Engaged with the international radical leftist politics of 1970s, the newsletter included articles on a variety of non-gay issues, highlighting the importance of leftist solidarity and the intersectionality of oppression. The first issue instantly informed readers of Fag Rag’s radical politics, emphasising commonalities with Women’s Liberation, Black Power and the New Left.

Throughout the newsletter, writers continuously emphasised their connections with radical Leftist politics. Fag Rag referred to the United States as “Amerika” or “Amerikkka”, criticising and rejecting perceived fascist sympathies and racist behaviour. Fag Rag defended its provocative title and consistent use of the words ‘fag’ and ‘faggot,’ highlighting that the “proud” editors “don’t want to fit Straight Amerika’s definition of manhood” [3]. Fag Rag flagrantly rejected heterosexual superiority, revelling in the insults such as ‘fag’ that straight society traditionally hurled at gay men.

Fag Rag frequently emphasised the need for illustrations and other creative output. The newspaper encouraged community participation by asking readers to “send us your drawings, photos, writings” [4]. The pictures and poetry sent in by readers highlight the variety of topics which inspired artistic outpourings in the gay community. Readers contributed to the representations of themselves, their lives and their relationships by submitting these drawings, cartoons and poems. By including artistic contributions, readers had a symbolic role and physical presence in the creation of community newsletters.

The fall 1974 issue of Fag Rag, which published a vast array of poems and images,highlights the importance of artistic creativity in gay liberation. One article described poets and poetry as “bedside friends” and “blatantly true to us,” providing support and recognition throughout centuries of rejection, discrimination and harassment [5]. The author emphasised that “poetry should serve and be part of the ‘movement’” [6]. The poetry addressed various themes including relationships, sex, politics and identity. Many of the images and poetry were sexually explicit, depicting and describing naked men and a variety of sex acts. Due to its overtly sexual content, Fag Ragoftenfaced censorship from prison authorities and disapproval from wider society [7]. The newsletter frequently challenged the myth that homosexuality was a modern phenomenon through a celebration of the presence of same-sex love throughout history. The fall 1974 issue memorialised W. H. Auden, the well-known gay English-American poet who had died the previous year, by interviewing Auden’s friend John Button. The interview sought to provide readers with a “balanced and tasteful impression of the poet,” discussing his homosexuality, upbringing, personality, and poetry [8].  The illustrations, letters and poetry in the fall 1974 issue embody the radical politics, sexual freedom, and provocative views of the newsletter throughout the 1970s and 1980s. 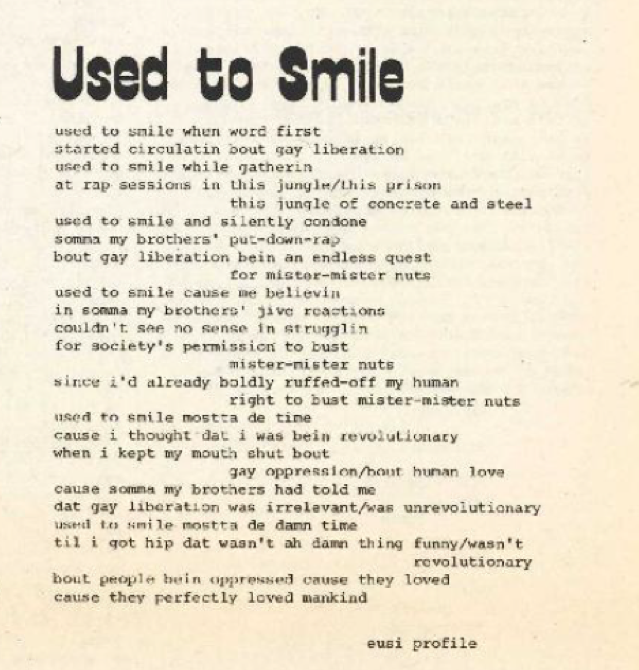 One of the many radical gay liberation newsletters published throughout the 1970s and 1980s, Fag Rag unapologetically celebrated gay life. Fag Rag rejected the fear of discovery or disapproval that influenced the homophile press and various mainstream gay newsletters. In fact, the newsletter revelled in the use of so-called vulgar language and pornographic imagery. Throughout the newsletter, authors emphasised their dedication to radical leftist politics, expressing the necessity of anti-racist, anti-imperialist, anti-sexist and anti-capitalist views in the gay liberation movement.By encouraging the submission of poetry and images, editors created a collective and democratic newsletter which promoted readers as community representatives who contributed to the portrayal of gay politics, identity, and community shown throughout Fag Rag.

Rachel Wallace is a Visiting Instructor in History at Loyola University New Orleans where she teaches on LGBTQ history, the 1960s, public history, women's studies and feminist theory. She is also a Research Fellow at the Southern Food and Beverage Museum and teaches courses in Women's Studies at Xavier University New Orleans. She completed her PhD at Queen's University Belfast in November 2018. Her writing can be found in The Journal of Popular Culture, Southern Cultures and The Public Historian.
View all posts by Rachel Wallace →
Tagged  C20, Cultural History, gay history, Leftist politics, LGBT history, Popular Culture, radicalism.
Bookmark the permalink.