Introducing the Series: I am Fatima: Negotiating Identities in Contemporary American-Muslim Women’s Writing

This is an introduction to the series ‘I am Fatima: Negotiating Identities in Contemporary American-Muslim Women’s Writing’ guest-written by Hasnul Djohar. This short series will explore American-Muslim women’s writing in the 21st Century, focusing on the negotiation of identities within the works of a specific author in each of the three posts. 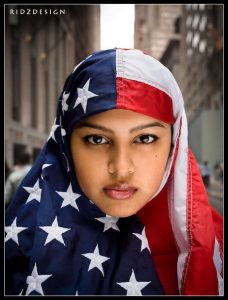 “I AM AMERICA”, Ridwan Adhami

A decade after 9/11: when I was pursuing my Master’s degree in English at Central Michigan University (CMU), I was walking to the university and suddenly a car driver shouted derogatory words at me because I was wearing the hijab (veil). Whilst still at CMU, I attended a conference about Muslims in the USA that had Omid Safi, an American professor of Middle Eastern studies at Duke University and the director of Duke Islamic studies centre, as the keynote speaker. Safi explained that Islam/Muslims have existed in the USA long before the USA declared its independence in 1776. However, Muslims are often perceived as a foreign culture/community in the US and Islam is usually understood with limited knowledge. These personal experiences have inspired me to further investigate how American-Muslim women tell their own stories and use some formal/aesthetical strategies in order to consider, in literary texts, some of the challenges faced by American-Muslim subjects after 9/11. Indeed, I have found and read approximately 176 literary works written by American-Muslims, and only selected American-Muslim women writers whose works are set in the USA and published after 9/11. In order to limit my research, I mainly focus on five American-Muslim women writers: Mohja Kahf (Syrian-American), Randa Jarrar (Palestinian-American), Shaila Abdullah (Pakistani-American), Diana Abu-Jaber and Laila Halaby (Jordanian-Americans).

By responding to postcolonial and feminist studies within the framework of multicultural studies, I have found four main strategies that these Muslim women use in their different genres, such as novel, short-story, memoir, and poetry: 1) the bildungsroman, does not only explore how they tell their own personal journeys both in homelands and the host-land, but also their spiritual journeys, such as travelling to Mecca and the Middle East; 2) using the symbol of food, which is used to show their own hybrid identities and to understand their parent’s different cultural and religious background; 3) using sites of memories, such as photographs and landmarks (pyramids and Shah Daullah’s shrine) in order to reveal their personal memories, which are connected to their cultural and political remembrance of the British colonialism; 4) using the sacred texts, the Quran and hadiths (the prophet’s words and deeds), folktales, and alluding to the iconic Muslim women who have become role model for women’s creativity, women’s empowerment, and women’s breaking the norm. Indeed, most characters in these literary works have struggled to challenge white mythologies and the norm prescribed by both dominant culture and religion in order to seek social justice. And equally, these struggles have to be passed on to the next generations in order to negotiate questions of belonging in, and exclusion from, US society since 9/11.

This series aims to explore the heroic stories of American-Muslim women through the different works of Kahf, Jarrar, and Abu-Jaber to better understand how these female writers are attempting to negotiate their identities as American-Muslim women of Muslim descent and consent. To do so, the articles will examine how these writers deploy some aesthetical strategies, such as the bildungsroman, allusions, folktales, and food. Additionally, this series aims to better understand how this group has not only suffered with other marginal groups from white mythologies from the periods of European colonialism and American imperialism, but have also struggled to seek social justice and equality. And with the aim to better understand these women’s struggles, this short series aims to contribute to discussions concerning American-Muslim literature, which explores both melancholic and convivial stories of marginal groups in order to reveal what it means to be American citizens of Muslim descent.

Hasnul Djohar is a PhD candidate in American Literature supervised by Dr. Sinead Moynihan and Dr. Florian Stadtler at the University of Exeter. She is an awardee of Indonesian Endowment (LPDP) Funded PhD in English and a Fulbright scholar. She is also a lecturer at Syarif Hidayatullah State Islamic University (UIN Jakarta), Jakarta, Indonesia. Her research focuses on culture (ethnicity), memory, and identity in contemporary American-Muslim women’s writing. Her twitter handle is @hasnuldjohar.
View all posts by Hasnul Djohar →
Tagged  American-Muslim, C21, culture, identity, Religion, Women Writers, Women's Writing.
Bookmark the permalink.