The Southern Student Organizing Committee and the White New Left

The New Left, traditionally defined, involved white students from middle-class backgrounds in northeastern and West Coast hotbeds protesting societal constructs in the 1960s.  Most accounts detail foundational connections between white New Leftists and earlier civil rights protest, such as Freedom Summer and the University of California – Berkeley’s Free Speech Movement in 1964, when project participants came back to campus in the fall after grassroots organising in Mississippi.  Considering the largely overlooked white southern radicals complicates this bi-coastal narrative.  The emergence of the southern New Left is especially apparent in the Southern Student Organizing Committee (SSOC), often viewed as the Students for a Democratic Society’s (SDS) southern counterpart.  Uncovering their history challenges easy characterisations of an unchallenged conservative white South, and reveals a distinctly southern student activism.

SSOC was formed in April 1964 when forty-five students from fifteen campuses across ten southern states attended a Nashville conference to discuss the role of the white southerner in the civil rights movement.[1]  Over the next two years, some 150 college chapters emerged on campuses across the South and a mailing list of approximately 3,500.[2]  Up to its 1969 dissolution, SSOC was involved in most southern New Left activity, bringing extensive campus unrest and subsequent reforms.[3]  With SSOC’s help, southern student protest peaked between 1968 and 1970, after SDS had collapsed as a nationally prominent group.  SSOC was more moderate than SDS, more respectful of southern political tradition, and more determined to situate racial demands within a class framework rather than an explicitly revolutionary agenda.

SSOC’s membership was predominantly white but sought to be a biracial coalition that debated issues of civil rights, student power, and the Vietnam War on southern university campuses.  Based out of Nashville, Tennessee, SSOC members redefined troubled aspects of their history in the 1960s—the ramifications of slavery, depictions of the Confederate flag—decades before the current debates over Confederate monuments and Civil War memory.  These southern white New Leftists reimagined regional heritage in order to entice other southern whites (largely unsuccessfully) into the movement.

SSOC consciously appropriated southern imagery for its avowedly interracial purpose.  Its emblem—strikingly similar to the Student Nonviolent Coordinating Committee’s (SNCC) black and white hands shaking logo—featured a white hand and a black hand embracing, with the Confederate flag in the background.[4] 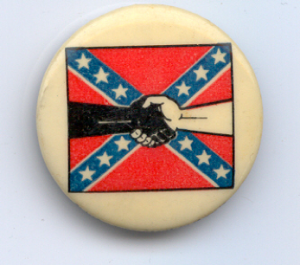 SSOC’s adoption of this symbol was most likely an intentional reference to SNCC, with a white southern inflection. 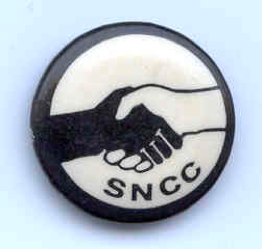 SSOC’s symbol bore an even closer similarity with the Mississippi Freedom Democratic Party (MFDP) badge, which showed black and white hands holding a lamp superimposed over the Confederate flag. 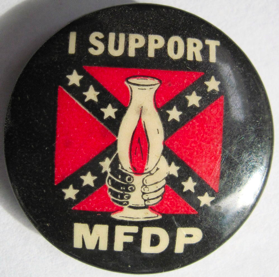 SSOC members believed that their symbol would inspire other white southerners to join their interracial southern reform coalition.  Indeed, SSOC member Lynn Wells stated the emblem meant to convey “You didn’t have to deny your identity and your heritage and your birthright to take a good stand on civil rights.”[5]  Members saw the civil rights movement and especially 1964 as a historical turning point when poor whites and blacks could then unite for socioeconomic and political improvement.

They also invoked previous southern radicals, even those with problematic racial baggage.  Robb Burlage, an SDS founding member and University of Texas graduate student, wrote SSOC’s founding statement, “We’ll Take Our Stand,” a direct reference to the Southern Agrarians’ 1930 “I’ll Take My Stand,” for the group’s inaugural spring 1964 meeting.[6]  SSOC’s acceptance of Burlage’s manifesto in Nashville, where the Southern Agrarians had been based, reworked the original document and its message.  Burlage saw the Agrarians as admiral opponents of southern industrialisation, but also as racist products of their time and place.  Part of the manifesto read, “We as young Southerners hereby pledge to take our stand now together here to work for a new order, a new South, a place which embodies our ideals for all the world to emulate, not ridicule.”[7]  (Original emphasis).

SSOC also shaped the focus of local white New Left organisations.  At the University of South Carolina, for example, members of the student organisation AWARE, a SSOC and SDS affiliate chapter, burned a Confederate flag in two protests on campus in February 1969.[8]  White student activists also supported black activist efforts in the late 1960s to end the playing of the Confederate anthem “Dixie” at athletic events, citing its offensiveness to African Americans; schools across the South witnessed these protests, including the University of Tennessee and Virginia Tech, among others.[9]

The role of the white southerner in the civil rights movement was both the organisation’s founding issue and its major ideological conundrum.  In the midst of civil rights upheaval, white southerners in the 1960s seemed unlikely supporters.  But that is exactly how SSOC defined itself.  SSOC set as one of its founding missions to encourage white southerners, college students and adult community members, to support the civil rights movement.  This support could involve joining pro-civil rights organisations, or to support the principle of equal rights; either way, this was a tall task.  As it became clear over the next few years, young southern whites who were inclined to join SSOC were ideologically different from their peers.  This made it difficult for them to formulate ways to encourage broader white participation in the civil rights movement, as did the movement’s changing politics.  As Black Power concepts became increasingly influential, national organisations like SNCC found themselves pressured by a radicalising base and the Vietnam War.[10]  SSOC’s challenging attempt to redefine racially problematic regional symbols also unintentionally alienated potential supporters, as well as some of its membership.[11]

SSOC’s difficulty in presenting itself as progressively southern while appropriating white southern cultural touchstones contributed significantly to its disbanding in 1969.  Given persistent southern racial antipathies and white southern militaristic traditions, their pro-civil rights, anti-Vietnam War message had little chance of large-scale success.  Yet interracial civil rights-based and class-conscious organising did not end with the SSOC and SDS’s dissolutions.  Other student organisations, like the October League, soon emerged.[12]  Moreover, even without major national organisational affiliation, leftist white southern student protest peaked after 1968, as the President’s Commission on Campus Unrest reported in September 1970.  While SSOC may have dissolved in 1969, its vision did not die with it.

[6] For more on Robb Burlage and his time at the University of Texas, see Doug Rossinow, The Politics of Authenticity: Liberalism, Christianity, and the New Left in America (New York: Columbia University Press, 1998), 165.  On the Agrarians, see Benjamin Houston, The Nashville Way: Racial Etiquette and the Struggle for Social Justice in a Southern City (Athens and London: University of Georgia Press, 2012), 52.

Review of the 1st Americas Postgraduate Conference at the UCL Institute of the Americas
More on War by Martin Van Creveld
Storify of our #bookhour twitter chat on MAÑANA MEANS HEAVEN by Tim Z. Hernandez

Kate Ballantyne is an associate tutor at the University of Leicester and a postgraduate secretary for Historians of the Twentieth Century United States (HOTCUS). Her research focuses on race and power in the twentieth century United States. Her doctoral research (Cambridge, 2017) examined student activism in Tennessee. She is on Twitter at @kate_ballantyne.
View all posts by Kate Ballantyne →
Tagged  C20, Civil Rights, New Left, Politics, Protest, The South, Whiteness.
Bookmark the permalink.