On Breaking Dissertations, or How I Read Sideways

My PhD program has brought me to Sydney, Australia. It is a cacophonous space for writing a dissertation if one counts the lorikeets I feed off my hand, and the historical-political soundscape. Both will inform the theoretical interlocution within Critical Whiteness studies and the critique of white avant-gardes in my project.

Crucial for my project was the realisation that my critique is always already contingent on my complicated and implicated positionality – that of a white Bulgarian scholar on the move, with a vested interest in mobility, and partaking in feminist movements.  I might have extricated myself from my reading context, but I could never escape the history I was bequeathed and the privileges that came with it. What Black critique has taught me until now is that the way I read is connected to privilege and positionality. Reading, then, is one of the practices I should keep in check. In my case, this entails questioning canonisation, articulatability, and representation. If I am to criticise racialisation of the American avant-garde, this investigation should begin with the way it appears before me. Put otherwise, to upend dominant discourse I attempt rea

ding against Kantian modes of understanding and policing of epistemologies. I want to read against myself – the subject which at least the feminist white avant-garde often imagined, and always, invariably preceded.

In her book In the Wake, Christina Sharpe politicizes subversive ways of seeing. I understand her work as a remarkable continuation of Saidiya Hartman’s Venus in Two Acts. One of the key arguments Sharpe makes is that of practicing anti-reading, or the exercise of cutting grammars of violence mid-sentence. While this practice might never be possible for White scholars, the struggle towards it is one of the ways in which I re-think the project. Sharpe’s work complicates my desire to submit a dissertation that poses a question, employs a theoretical approach, and delivers an outcome. In other words, a dissertation which enlists instances of racism, ties them up with a bow and a full stop, and catapults yet another white scholar into academia. If I take critical work seriously, which I do no matter how ‘minor’ the project is, then for me anti-reading implies that much of what I do should take the shape of self-sabotage.

The further I delve into the project, the more pressing becomes the question whether there exists a methodology that attends to practices of unreading and whether a White scholar could ever impede their own safety? How would self-sabotage appear in such an endeavour? I have begun to realise that form and formality are invariably linked to epistemological violence, to the way knowledge inhabits and inhibits understanding. Experimentation often entailed elitism, but dissidence experiments, too. This double grammar resuscitates avant-gardism and requires a careful attention. The white avant-garde claimed the former through the latter, and the fact that it did raises the question of form. When does form collapse? Is there a way to make this visible?

I re-double the ink of the words I tagged my Sydney desk with – “academic, intellectual, theoretical exercise not as a completed thought” (‘Black Feminist Futures’). Yet, who am I to attempt cognitive openness when the only hint of knowledge’s claustrophobia came to me through Ingeborg Bachmann (‘man and woman […] servants of a language’ (934-5) my translation), and perhaps through Jacques Derrida’s elusiveness of language? To pose this question is to submit to a good deal of narcissism.

Of course, Black radical thinkers collapse any white attempt of understanding – a brilliant example is NourBese Philip’s Zong!. There has also been a considerable amount of work done on the way white criticism fails to ‘see’ Black texts – and condemned them to white symbolic colonization (Broeck). So, how then 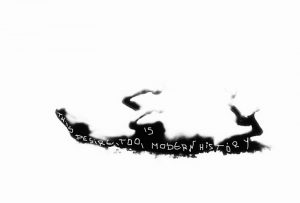 to approach the question of claustrophobia and openness? Given that I am not exempt from hegemonic knowledge production – how to turn writing into a self-reflexive withdrawal? The methodology I outline below is the current shape of things on my end. It will surely change, given learning processes and failures, but the reasoning behind it might offer a few questions for BAAS readers to engage with.

I understand the urgency of reading-otherwise as pertaining to the larger framework of unthinking Eurocentrism and countering White epistemological violence. Lisa Lowe asserts that “it is necessary to act within but to think beyond our received humanist tradition and, all the while, to imagine a much more complicated set of stories about the emergence of the now” (11). Borne out of the query of such imagination, my project presupposes a particular intention of, and being in tension with, its own content. The question of how one unreads Hegelian histories and progress (in constructions of meaning through character, predicate, grammar, novel, form) is integral to the project and I attend to it through annotated disruptions which go against academic formulations.

The shape my struggle takes is that of textual annotations scattered over the main analysis. They interrupt the flow of the investigation – by breaking it, adding a different meaning to it, continuing sentences otherwise, and overlaying the main examination with a commentary that interrupts close reading. The annotations offer political meditations which support and sabotage the interlocution and do so on several levels. The simplest is the textual caesura that addresses racialized canonization. I want this to be visible in my work although I argue that exclusion from the canon is not the only way the avant-garde performed its antiblackness. I follow Edouard Glissant’s right for opacity, and inform my analysis with the work of Christina Sharpe, Saidiya Hartman and Toni Morrison.

I attend to questions of canon and preclusion by exploding close readings. I am conscious of the time I dedicate to popular White writers. Although I disagree that a mere inclusion can be a corrective of canons’ claustrophobia, I attempt to go against white-on-white insularity. Part of the danger remains, of course, tokenism to which the avant-garde is already privy. To criticise the avant-garde cannot entail a complacent turn to only one direction, and scholarly work demands some sort of schizophrenia and openness at least from where I am standing.

The idea of opening up is not new. Toni Morrison, Saidiya Hartman, Tina Campt and Ta-Nehisi Coates propose to address hegemonic ways of organizing understanding through openness. Yet, Opening-Up exceeds inclusionary dreams of a ‘more encompassing, colour rich canon’ (Hong). Instead, it works against what Jacqueline Rose exposed as White ‘diagnostic certainty’ (100).

For Lowe, questioning entails a recognition of ‘our lack of knowledge’ (206) – and for me, positioned in Whiteness, it suggests conceding to structurally unavoidable blind spots. The textual demarcation ensues as a rethinking of refusal or what Campt describes as black fugitivity (‘Black Feminist Futures’). The refusal to fall in White symbolic colonization determines the impossibility of my project and turns its theoretical scope into a question of withdrawal. To open the project is to acknowledge being refused – as a White scholar whose writing remains at a distance from any danger (the latter structuring Black life gratuitously as Afro-pessimists reveal) but also from any understanding Black thought presents because White philosophy and history erase it the moment it is made.

By annotating the text, I work through Hartman’s reading ‘against the grain’ and Wynter’s ‘deciphering practices’. Vulnerability and incomprehension are modes I re-think through, not avoid. Of course, neither Theodor Adorno’s contention that “philosophical reflection makes sure of the nonconceptual in the concept” (12), nor Derrida’s elusiveness of language  theorize abstraction to the extent Black critique does. Nor do they grapple with the fact that the continuous erasure of certain b 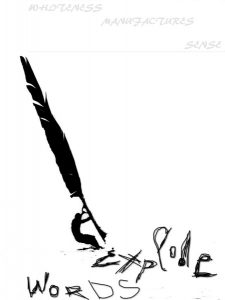 odies and histories has left such a vast empty space that every speculation, if inserted, further obliterates those lost (Hartman).

The stylistic marking I work through points to the myriad possibilities of unhearing black voices by a simple capacity for choice. As we are reminded by Ian Baucom and as I elaborated in my Masters thesis, a deliberation on Whiteness and engagement with Black critique continue to appear voluntarily and on White terms.

Incredibly important for me is Sharpe’s In the Wake. Sharpe upends narrativisation and history and in this – she is not alone. A number of artists and writers address the ways through which narrative extends Black suffering, and work against white wor(l)diness.

I attempt to make visible how implicated and complicated everything I produce will ever be. Visual demarcation will not render my contemplations antiblack, decolonial or philosophically sound. Disruption, however, impedes my writing and obfuscates well-learnt modes of producing knowledge. Dislodging practices of writing and reading is, I believe, an integral part of Decolonial Humanities. My project suggests that dissonance recruits other senses of perceiving the world and explores the value of self-sabotage. Critical work for me is the exercise in shedding Whiteness visibly, against and of oneself. All of it –as part of an unfinished project, on the same spot/page, there where the avant-garde has led us.

Broeck, Sabine. “Trauma, Agency, Kitsch and the Excesses of the Real: Beloved within the Field of Critical Response”. Esders, Haertel and Junker 239-257

—“Will White Feminism Surrender the Default Position? Gender Studies and

Coates, Ta-Nehisi. Between the World and Me. Melbourne: The Text Publishing Company, 2015.

Literature”. The Tanner Lectures on Human Values. The University of Michigan, 7.

—In The Break: The Aesthetics of the Black Radical Tradition. Minneapolis:       University of Minnesota Press, 2003. Print

Philip, NourbeSe, “In Conversation with M. NourbeSe Philip: We Can Never Tell  the Entire Story of Slavery”. The Toronto Review of Books. 2014, Web. 1st August  2015

—“Trying Her Tongue”, Dwelling in Possibility: Women Poets and Critics on Poetry.

Sharpe, Christina, “In The Wake”, The Futures of Black Studies-Historicity, Objectives and

—In the Wake. On Blackness and Being. Durham and London: Duke University Press,

Spillers, Hortense. Black, White and in Color: Essays on American Literature and Culture.

Wilderson, Frank, “Gramsci’s Black Marx: Whither the Slave in Civil Society?”. We Write.

American Studies in Europe: Interview with Francisco J. Rodríguez, University of Salamanca
The Exhibit That Bombed: The Enola Gay Controversy and Contested Memory
The Forgotten LGBT Pioneers of 1956