This is the seventh post in a special series exploring and discussing artefacts from a selection of Adam Matthew Digital collections. This article uses primary sources from the ‘American History 1493-1945’ collection, which can be accessed here.

The letters of Charles J.C. Hutson, a former student of South Carolina College and a soldier in the First South Carolina Volunteers, provide insight on various topics pertaining to the American Civil War era. Held at the Gilder Lehrman Institute of American History and accessible via Adam Matthew Digital’s ‘American History 1493-1945’ collection, the bulk of the materials pertain to the war period (1861-1865). Readers will find particularly interesting commentary on Hutson’s military experience and his views on the wider Confederate cause; the young soldier professed a firm attachment to the cause, criticising detractors of the Richmond government or so-called “croakers” (letter dated September 3, 1863) and continuing to hope that “we will yet be a free people with our own laws & institutions,” despite the Confederacy’s increasingly desperate plight by the war’s final stages (letter dated March 20, 1865). But it is Hutson’s remarks on a company flag from early in the war that this piece will focus upon. Though perhaps trivial at first glance, these remarks offer us a personal perspective on the complex ways in which southerners developed a relationship with their fledgling nation and their wider ideas about the Civil War. 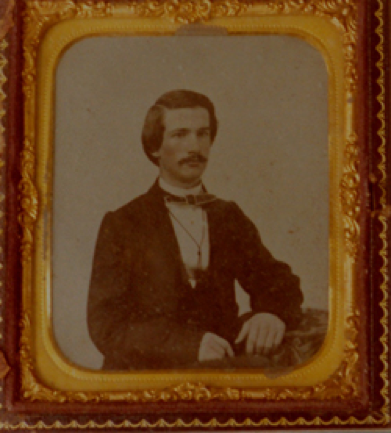 On September 1, 1861, Charles Hutson responded with both enthusiasm and exuberance to the news that his sweetheart Emmeline Colcock and other local ladies were producing a flag for his company.  “We are very much indebted to the patriotism and kindness of you ladies who are undertaking the preparation of this handsome flag of which you speak.” As Hutson continued, he emphasised the personal connection the flag would have,

“It will be doubly sustained & loved by me since my dear Emmeline has been instrumental in its preparation. Remember dear gentle Em. that your Charley will either die under its waving folds or return to you with it protected under its victorious & triumphant motto.”

Hutson never expanded on what the motto actually was but it was probably a statement glorifying the martial defence of the South – other flags included mottos such as “Any Fate but Submission,” “Liberty or Death,” and “Pro Patria” (“For the Homeland”).[1] More significant than the motto, however, was Hutson’s life or death interpretation of the flag’s significance. Hutson essentially viewed the flag as constituting a vow, a solemn promise, to give everything he had in defending it. But to whom did he owe this vow and what, exactly, was he defending? The power of the flag lay in the fact it melded the obligations Hutson owed to his family (as it was prepared, in part, due to his “dear gentle Em.”), his community (as other local women were involved in its production and the flag represented his company), and his nation (as the unknown motto and design of the flag most likely evoked southern nationalism). The flag was a potent symbol for Charles Hutson precisely because it blended the personal and the political, the intimate and the ideological.[2] 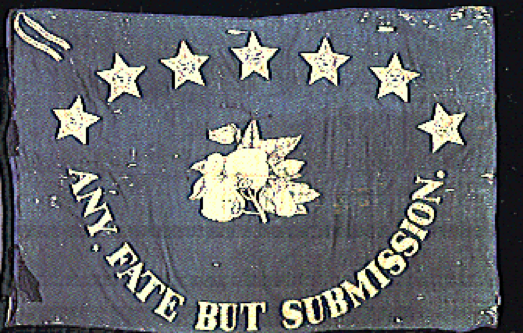 As Charles’s letter to Emmeline spells out, gender was central to Confederate flag culture.[3] We do not know whether this flag was ever actually presented to William Haskell’s Company H, but there was often a female presence at and involvement in these presentation rituals. That women sewed these flags or contributed in other ways – a probable list of contributors to the flag Colcock and Hutson were referring to, for instance, listed a Miss Floride Cunningham as donating “silk for the Flag” – made them material embodiments of female sacrifice and devotion to the cause, of female “patriotism” to use Hutson’s term.[4] The role of southern women in the process of producing and presenting flags had two important outcomes. First, it presented (or at least projected) that women were deeply devoted to the Confederacy and, by implication, that likewise devotion was expected from men. As the South mobilized for war, it was imperative that it was united; simultaneously, female pressure on men to volunteer was a potent tool for military mobilization. Second, the production of these flags by women inscribed upon them a symbolic sense of feminine purity.[5] Defending the flag in battle was not merely about defending the new southern nation, but also about preventing the defilement of southern womanhood. As a speech following the presentation of a company flag from “the fair and patriotic ladies of Hamburg,” South Carolina, put it, “the daughters of our soil [are] asking us to avert the shaft which the vandalizing hordes of Northern fanatics are aiming at their dignity and our honor.”[6] This gendered construction of company flags surely served to undergird the aforementioned life or death rhetoric that Confederate soldiers such as Charles Hutson applied to the defence of such symbols.

1861 represented the zenith of the production and presentation of the kind of flag discussed in Hutson’s letter. The introduction of Confederate conscription in 1862, in particular, saw the symbolism and community ritual described here replaced with the powerful instruments of the state as a means to mobilize the South’s male population. Nonetheless, the complex messages, motivations, and memories that people inscribed, both literally and rhetorically, on these flags offers us a keen insight on the dynamic ways in which pro-Confederates strove to interlace the local and the national as they constructed their vision of the South’s bid for independence.

“The show will go on”: the successes of Trump and Sanders push back the end of the primary elections
Review: 'Mothering Slaves: Motherhood, Childlessness, and the Care of Children from Slavery to Emanc...
“Atomic Ayatollahs”: The ‘Islamic Bomb’ in 1980s American News Media

Patrick Doyle is a historian of nineteenth-century America with a specific interest in the Civil War era. He joined Royal Holloway in September 2014 as Lecturer in Modern American History and is currently working on a monograph which explores the interconnected issues of family, community and loyalty in Confederate South Carolina.
View all posts by Patrick Doyle →
Tagged  C19, Civil War, History, Southern History, Southern Women, The South.
Bookmark the permalink.