Part II: Anti-war Activism within the Military: ‘We cast these medals away as symbols of shame, dishonor, and inhumanity’: Veteran Protest and the Rejection of Cold War Patriotism

This is the second post in a two-part series considering anti-war activism among soldiers and veterans during during the Vietnam War. Much of the primary source material for the posts came from the Wisconsin Historical Society, who awarded Lauren with a grant to work in their archives. With thanks to The Friends of the University of Wisconsin-Madison Libraries for their financial assistance and support of this research.

Soldiers returning from the battlefields of World War II were treated as heroes and their sacrifice was celebrated long after their homecoming.  By contrast, Vietnam veterans were not similarly welcomed home as champions of democracy.  Indeed, some veterans felt there was not any honour in their participation in Vietnam.  In 1967, a small group of likeminded veterans – simultaneously upset about the treatment of Vietnam veterans when they returned home and the particularly violent nature of the war – founded Vietnam Veterans Against the War (VVAW).

In articulating their dissent these activist veterans similarly invoked patriotic imagery in their activism.  Like GIs who considered their protest to be a patriotic service, many activist veterans viewed their activism as a second tour of duty.  As one call support said, ‘after our time in Vietnam we know that the most difficult and painful part of our service begins now – – in telling Americans what is being done there in their name.’[1] 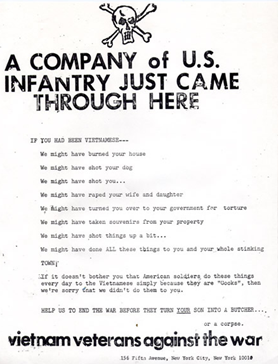 Relying heavily on ‘street theatre’ protests, veterans sought to ‘bring the war home’ and confront American communities with the realities of combat.  One of their first mass actions was Operation Rapid American Withdrawal in 1970. Veterans in military fatigues retraced General Washington’s famous march from New Jersey to Valley Forge, Pennsylvania – the site of the pivotal winter encampment of Washington’s troops during the Revolutionary War.  On the way, the vets conducted search and destroy missions as they might have in Vietnam; local actors played the role of Vietnamese citizens and left fliers behind, suggesting what might have happened.  In these performances, veterans did not shy away from depicting the violence as they experienced in the warzone – overt and indiscriminate.  Indeed, many veterans recounted experiencing episodes of PTSD during this march.[2]  Most significantly, this protest action was specifically constructed to challenge official Cold War mythology by forcing civilians to confront the violent realities of the way the US military was fighting in Vietnam.

Continuing this second tour of duty to defend American ideals, VVAW organised the Winter Soldier Investigation in January 1971 – an event developed in the aftermath of revelations surrounding the My Lai Massacre (March 1968).  Where politicians and the media blamed one man’s actions for an isolated occurrence, veterans sought to demonstrate the prevalence of war crimes committed by American soldiers.  They argued that this violence was an every day occurrence during Vietnam War and a result of war policy, rather than the depraved actions of a few individuals.  The patriotic course, then, was not to blindly support Cold War policy, but to stand up for American ideals.  Again invoking the Revolution, William Crandell’s opening statement for the Winter Soldier Investigation declared:

In the bleak winter of 1776 when the men who had enlisted in the summer were going home because the war was hard and their enlistments were over, Tom Paine wrote, “These are the times that try men’s souls.  The summer solider and the sunshine patriot will in this crisis shrink from the service of his country, but he that stands it now deserves the love of thanks of man and woman.” Like the winter soldiers of 1776 who stayed after they had served their time, we veterans of Vietnam know that America is in grave danger.  What threatens our country in not Redcoats or even Reds; it is our crimes that are destroying our national security unity…We are here to bear witness not against America, but against those policy makers who are perverting America.

In the coming days, soldiers testified to the indiscriminate violence they committed in Vietnam.  While the event was met with minimal public coverage, veterans recall it being a cathartic and healing experience, allowing them to interact with others who understood what they had been ordered to do. It also motivated veterans to continue to make the realities of the war public. 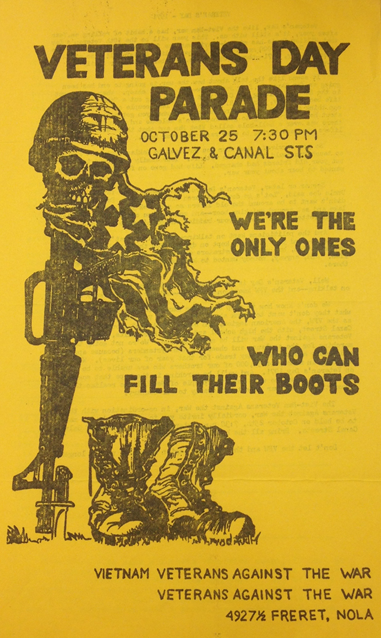 In 1971, VVAW brought their fight to the nation’s capital for Operation Dewey Canyon III (a name taken from the secret incursions into Cambodia and Laos).  By describing this event as a ‘limited incursion into the country of Congress’, VVAW explicitly positioned themselves as engaged in combat against American policymakers.[3]  Arranging their protest site to resemble a war zone, veterans set up army encampments on the National Mall as they might have in Vietnam, and performed guerrilla theatre as they had in Operation RAW.  Others marched to the Pentagon and attempted to surrender as war criminals based on their testimony during the Winter Soldier Investigation.  However, the most enduring memory of the event was one that was unplanned.  Barred from entering the US Capitol building by a newly constructed fence, VVAW members began speaking on the steps.  Hundreds of veterans threw their medals and other military commendations over the fence and in doing so rejected any characterisation of their service as valorous or patriotic. As one veteran declared before throwing his medals: ‘we don’t want to fight any more, but if we have to fight again it will be to take these [Capitol] steps.’[4]  Clearly, those involved with VVAW felt the real fight for democratic ideals was not in the context of the Cold War, but against policy makers that failed to uphold the nation’s democratic ideals.  As General David M. Shoup explained, activist veterans believed ‘they are serving their country in the same loyal manner that characterized the fullfillment [sic] of their duties as members of the Armed Forces.’[5]

In the run up to Veterans Day 1971, the Louisiana Chapter of VVAW declared:

Far from being the beacon of patriotism and democracy, veterans challenged popular Cold War rhetoric and argued that US foreign policy was undemocratic and undeserving of the sacrifice of American lives.

As the only war that the US lost, there were concerted efforts in the 1980s to revive a useable memory of the conflict.  Films like Rambo (1982) sought to use the narrative of the valorous fighting man to reinvigorate the image of the patriotic soldier.  Indeed, by the conflicts of the 1990s, it had become popular gospel that one could support the troops and not the war.  In this iteration, the protests of veterans and GIs and this revived ‘heroic’, indefatigable image of the American soldier could not coexist.

Thus, while the recent NFL protests were intended to highlight persistent racial inequities of American society, they also highlight the inflexible nature of American popular patriotism.  With these moments of soldier and veteran protests absent from recent popular memory, pundits, politicians and laypeople are able to argue that any protest against the flag is a protest against the troops and their sacrifice.  However, the 1960s and 70s demonstrate that some soldiers and veterans themselves took issue with the equation of their service with patriotism.  Instead, they argued that true patriotism meant defending American ideals irrespective of current foreign policy efforts.  Their activism encouraged many Americans to reconsider this inflexible, monolithic American patriotism, and indeed should encourage historians and the American public to reconceptualise the potential breadth and meaning of American patriotism today.

Silence = Death: Podcasting the history of the AIDS Crisis
Songs about Rebels: The American Civil War in modern country music
An Epidemic of Presidential Ignorance: The AIDS Crisis and the US Presidency

Lauren Mottle is in the third year of her PhD at the University of Leeds. She is originally from the United States and completed her Masters at the University of North Carolina at Greensboro. Her research explores the anti-war activism of soldiers and veterans during the Vietnam War. Specifically, her research interrogates how this activism reshaped the relationship between citizenship and soldiering in the United States. She is supervised by Prof. Simon Hall and Dr Jessica Meyer.
View all posts by Lauren Mottle →
Tagged  Activism, C20, Cold War, Protest, Veterans, Vietnam, War.
Bookmark the permalink.