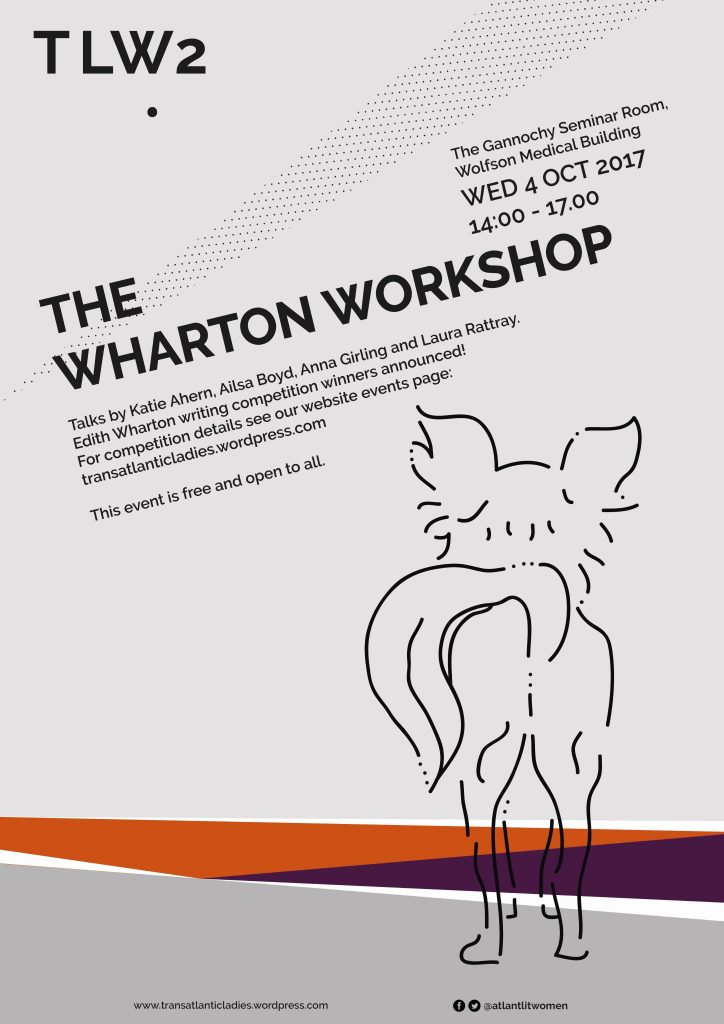 Among the first events of the new season of the Transatlantic Literary Women Series was an Edith Wharton workshop which was fittingly transatlantic and transnational in scope, welcoming participants from Scotland, England, Germany, China, Ireland and Canada. The Series founder, Dr Laura Rattray (Reader in American Literature, University of Glasgow) opened proceedings by reminding us of the impressive, and all too often overlooked, breadth of Wharton’s writings.  While best known as a novelist Wharton published across a full range of genres; taking in poetry, drama, travel writing, memoirs, interior design manuals and architectural commentary during her prolific career.

Dr Ailsa Boyd (University of Glasgow) discussed the importance Wharton placed upon matters of style and dress.  She demonstrated how Wharton used her stage dressing details to convey characterisation, citing the garish hotel suite of the Spraggs in The Custom of the Country.  We were all surprised to see the elegance of the old colonial style of the deserted building where Charity Royall and Lucius Harney played house in Summer.  This was not the forest hut so many of us had envisaged, but rather an elegant, wood built structure with decorative plaster work and classical lines.  Boyd highlighted the way Wharton used her material cultural references to create specific historical context for her fiction.  Her attention to stylish detail is far from mere frippery but rather an integral tool in her authorial arsenal.

Katie Ahern (University College Cork) neatly developed the discussion on the significance of dress, with a specific focus on Summer and the causes of anxiety between the female characters.  She explored the role of envy between Ally Hawes and Charity, the complex societal signalling of hierarchy communicated through costume and the subtle ways Ally expressed her disapproval.  One particular example cited by Ahern was Ally taking inspiration when sewing Annabel’s new blouse from a similar garment worn by her prostitute sister.  By dressing Annabel in such borrowed ribbons Ally is inviting a wider comparison of the two characters.  Again, this points to the way Wharton uses intricate stylistic details to convey meaning at a subtextual level, embroidering subversion into her texts. 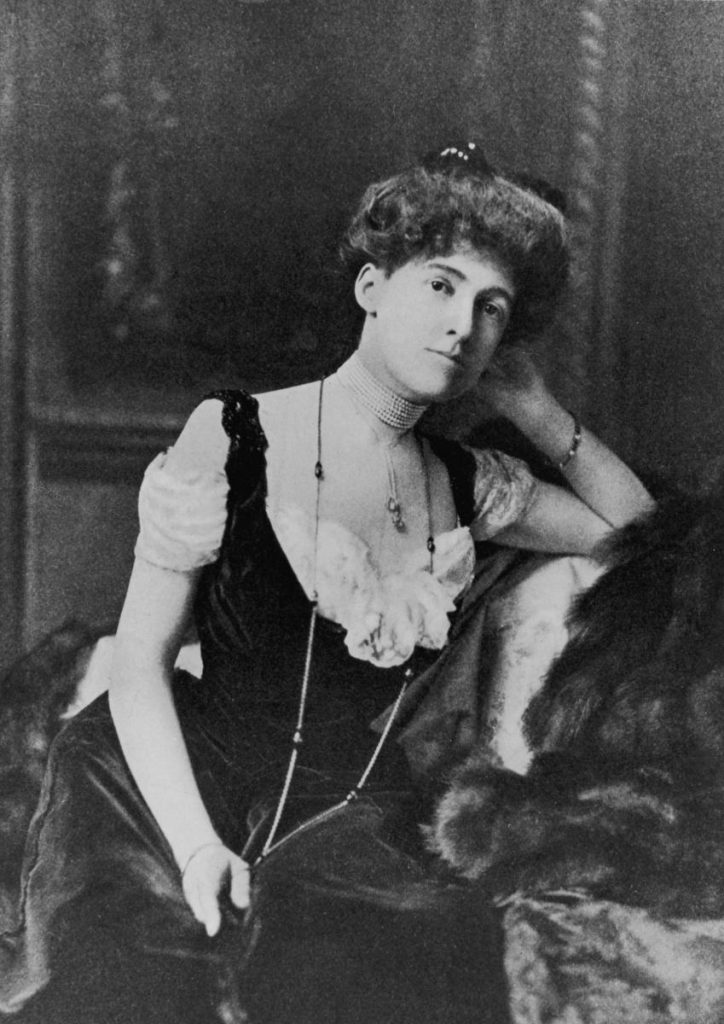 After a short break for tea and sandwiches, we reconvened to listen to Anna Girling (University of Edinburgh) and her search for Hibernian links to Wharton and her missing dog, Jules.  Much has been made of Wharton’s love of little dogs, but Girling has found a surprising lack of information about Jules, a Skye terrier, beyond two pictures and a reference in her correspondence to Wharton mourning his passing.  A similar obscurity in the archival record relates to John Murray, Wharton’s initial publisher in the UK.  Wharton dismissed him as hardly worth mention in her autobiography, and Hermione Lee describes him as a ‘false start’ and nothing else in her biography of Wharton.  Girling, however, has uncovered hitherto unknown correspondence between Wharton and Murray whilst doing research in the Murray archive in Edinburgh.  These letters show that Murray himself chose the name for the UK edition of The Touchstone, settling on the somewhat melodramatic A Gift From the Grave, much to the dissatisfaction of the author herself.  Girling reminded us that unless we consult the archives ourselves we will forever be restricted by someone else’s interpretation of what merits attention, and unfortunate publishers, and terriers, might remain hidden if we don’t actively engage with the records (The search for Jules continues…).

Rattray drew the afternoon’s talks to a close with a look at the influence of the theatre on Wharton and her writings, and her work as a playwright.  This often neglected aspect of her oeuvre was of great significance to Wharton, but commercial success as a dramatist proved elusive.  A range of fragments exist, of plays engaging with early feminist themes such as sex, abortion and illegitimacy, but we did not have an entire, original Wharton play.  Earlier this year, however, Rattray and Dr Mary Chinery (Georgian Court University) discovered—when consulting the Harry Ransom Theatre Archive in Texas—a full, three act script, of which Wharton scholars had no knowledge – The Shadow of a Doubt (now available in full in the Edith Wharton Review).  Laura and Mary’s research has dated the play to 1901 and have interrogated its complex production history. Despite Elsie de Wolfe being cast in the lead, and the famous Charles Frohman taking on its production, the play never made it to Broadway and slipped into obscurity, though Wharton recycled its dramatic plotline of euthanasia for her novel The Fruit of the Tree. Rattray and Chinery’s research is establishing that at the turn of the century, the writer who would become the first woman to win the Pulitzer Prize for fiction was more interested in seeking success as a playwright than a novelist. 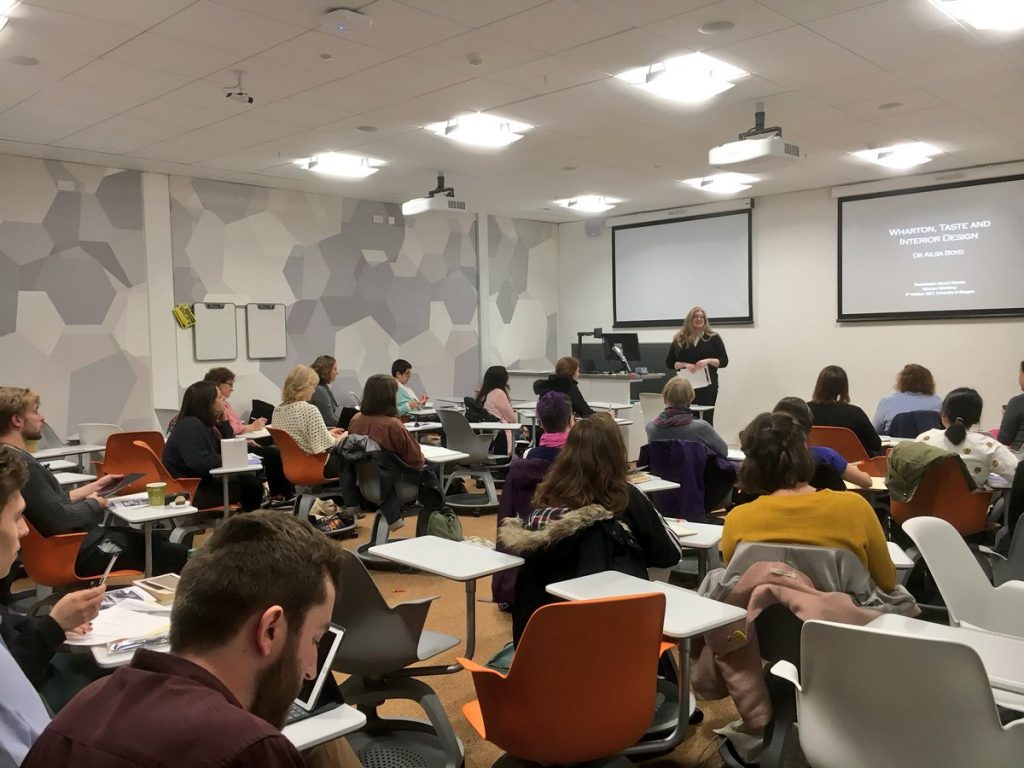 Throughout the afternoon Margarida Cadima tested our knowledge of Wharton with a range of questions in the form of a quiz.  Sally, an appropriately transatlantic Canadian, claimed the glory with an impressive score.  Margarida herself was one of three winners of the Transatlantic Literary Women’s latest writing competition, where participants were invited to re-imagine the ending of a Wharton novel of their choice. The winning entries in the Wharton competition are available here and more information on the series is available here, with regular updates on the twitter account: @atlantlitwomen

"Be broad, be bold and be aware": Review of the 2014 HOTCUS Postgraduate and Early Career Researcher...
A Relatable Past? Early America on the Small Screen
Book Review: American Unexceptionalism - The Everyman and the Suburban Novel after 9/11 by Kathy Kna...

Deborah Snow Molloy is an American Literature PhD student at the University of Glasgow. She is researching the relationship between the New York environment and the mental state of female characters in women's literature. Deborah's wider interests are in literary geography, medical humanities and early twentieth century American women's fiction. For more information on Deborah's research, you can visit her researcher profile(https://www.gla.ac.uk/schools/critical/postgrad/currentpgs/deborahmolloy/) or follow her on twitter @snowmolloy.
View all posts by Deborah Snow Molloy →
Tagged  C20, Edith Wharton, Transatlantic Literary Women, Transatlanticism, Women Writers.
Bookmark the permalink.