Review: Special Relationships: Poetry Across the Atlantic Since 2000

Special Relationships: Poetry Across the Atlantic Since 2000, Rothermere American Institute, University of Oxford, 19 May 2017

The one-day symposium held at the Rothermere American Institute (RAI) at the University of Oxford on ‘Poetry Across the Atlantic Since 2000’ featured an arresting array of speakers from both sides of the Atlantic. Singaporean poet-critic Jee Leong Koh (who recently guest edited Issue 288 of Ambit Magazine) and Jewel Pereyra, a Graduate Research Associate for the Lannan Center for Poetics and Social Practice at Georgetown University arrived from New York and Washington D.C. respectively, whilst renowned British poet and academic Sarah Howe (University College London) and poet-critic Sandeep Parmar (University of Liverpool) sat in conversation with poet and academic Oli Hazzard (University of St. Andrews) during the day’s concluding ‘Poetry Roundtable’, which sought to highlight specific themes in response to the papers and conversations throughout the event.

During the first panel, a key theme emerged with Dave Coates’ (University of Warwick) presentation on ‘Awards Culture and Whiteness in Contemporary Poetry’, which consisted of a provocative distillation of statistics on the racial biases which persist within British poetry. Coates did not mince words as he lambasted the poetry establishment for the following: ‘9 critics of colour published 12 articles in this data set, compared to 178 white critics publishing 269 articles. 47 books by poets of colour were reviewed, compared to 441 books by white poets. Only Poetry Review exceeded the 12.9% demographic benchmark for books reviewed (thanks to poet and guest editor Kayo Chingonyi). None met this benchmark for critics.’ Coates noted in particular the dearth of poets of colour being reviewed in The Guardian, for as of the week prior to the conference held on 19 May 2017, ‘…The Guardian had not reviewed a poet of colour in almost 15 months.’ 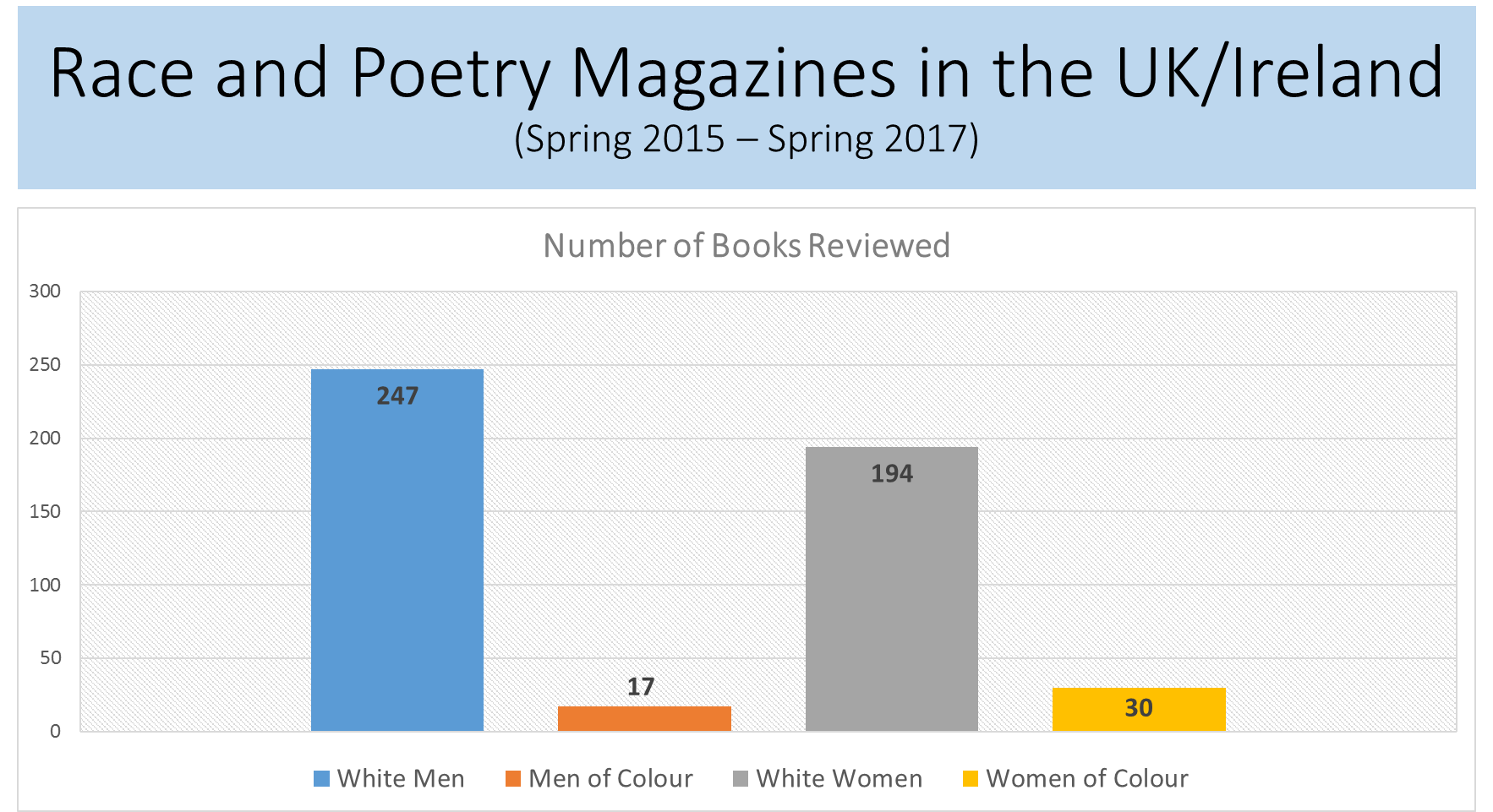 In terms of race, gender and poetry prizes in the UK, Coates observes that ‘Simon Armitage, David Harsent, Seamus Heaney, Sean O’Brien, Don Paterson and Robin Robertson account for a combined total of 21 wins and 53 short-listings, [whilst] alongside ten wins, all poets of colour have been shortlisted a total of 41 times.’ Coates’ main claim that racism in the UK has been overlooked by British poets and audiences seems to be borne out through his presentation, though he acknowledges that other pertinent factors such as class, disability, and sexuality have not been included or effectively analysed. 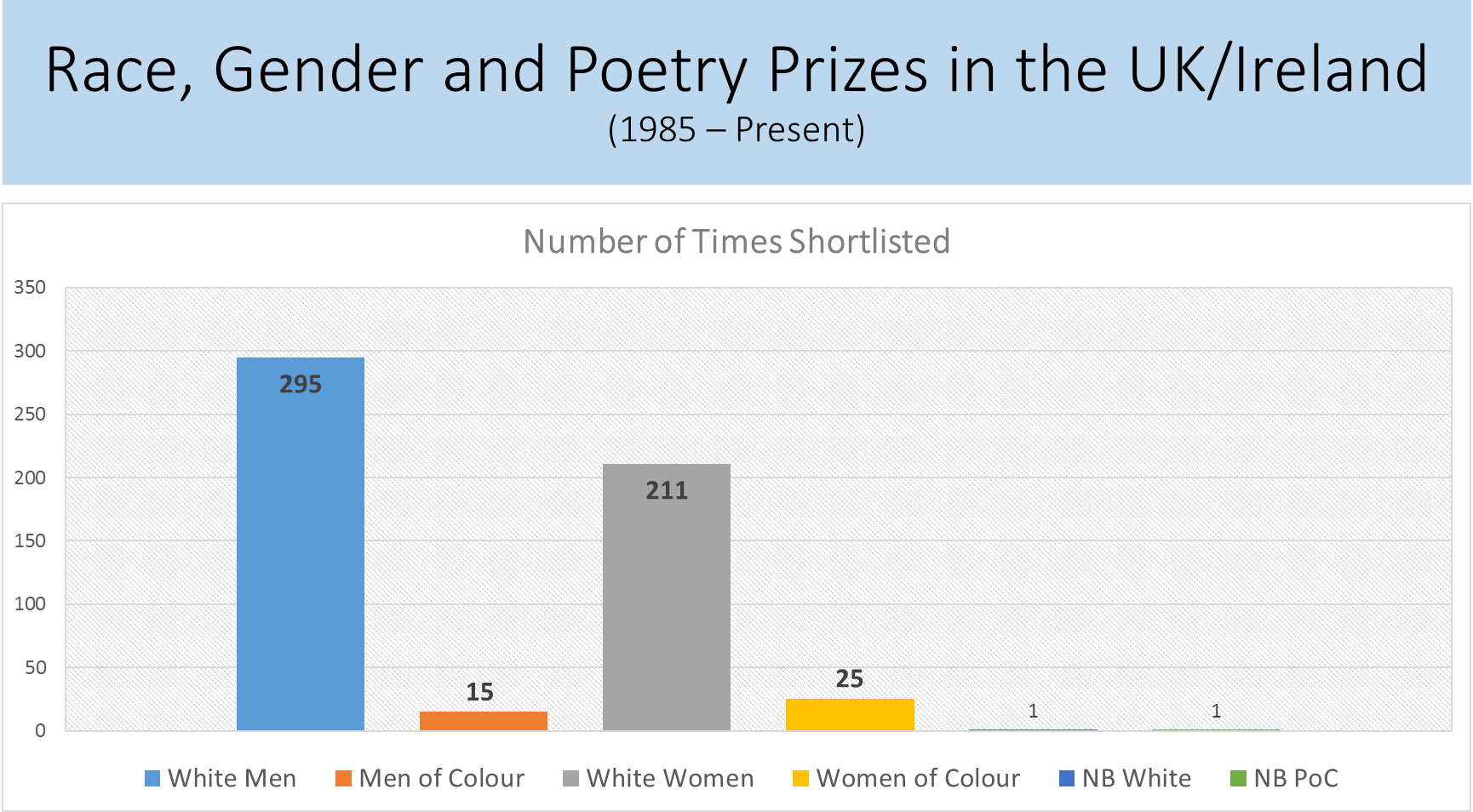 This proved to be a topic of recurrent interest throughout the rest of the symposium, with Dai George’s ‘Salt Aesthetic’ being probed by several audience members during the Q&A. Questions were raised as to whether George’s use of the term ‘experimental mainstream’ to characterize his three poets formerly published by SALT – John Clegg, Luke Kennard and Mark Waldron – might constitute an overtly ‘white’ aesthetic or not. Having completed my MPhil in Development Studies at Oxford in the past, I returned to Oxford as a researcher in a completely different field – Creative Writing – to present my paper entitled ‘Spatial and Spiritual Subalternity in Kei Miller’s The Cartographer Tries to Map a Way to Zion’, during which I discussed how Miller conceives of his own conflicting identities through the seemingly polarised personae of the Cartographer and the Rastaman, and how he negotiates his role as the Westernised intellectual par excellence whilst being a poet with overt sympathies for the Rastafarian movement in his hometown, Jamaica. 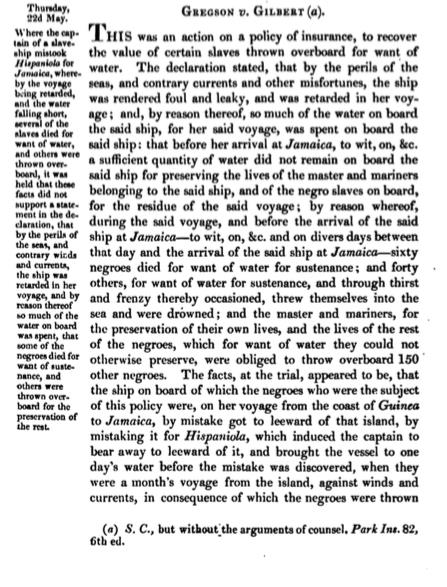 Gregson vs. Gilbert and the Zong Massacre, Image courtesy of Jewel Pereya

These complexities regarding race and racism in a postcolonial context were further discussed in the second panel featuring Jess Cotton (UCL) and her working paper on Bhanu Kapil. Cotton discussed ‘the power of passivity’ in a work made of ‘refusals’, thus constituting ‘a kind of failed performance’ that was potentially ‘less white, less male’, and how ‘the prone female body [acts] as a site of rethinking national borders’. Such an understanding of passive resistance jostles uneasily against Jewel Pereyra’s analysis of M. NourbeSe Philip’s Zong! (2008) and Claudia Rankine’s Citizen: An American Lyric (2014), since slavery presents the ultimate failure of such a passive resistance against the yoke of colonialism and the horrors of the Middle Passage. Pereyra argued that the law functions as ‘an unconscious scaffolding’ to black American poetry, and that Zong! resists the imposition of a functional and comprehensive legal grammar that legitimises horrific incidents such as the Zong Massacre. Instead, it opts for a complete disintegration of form by presenting a ‘decomposed, fragmentary syntax…to embody the materiality of slave bodies’. This in turn speaks to Rankine’s use of the lyric essay in Citizen, which also seeks to powerfully link racism and racial injustice in contemporary America to the country’s legacy of slavery. 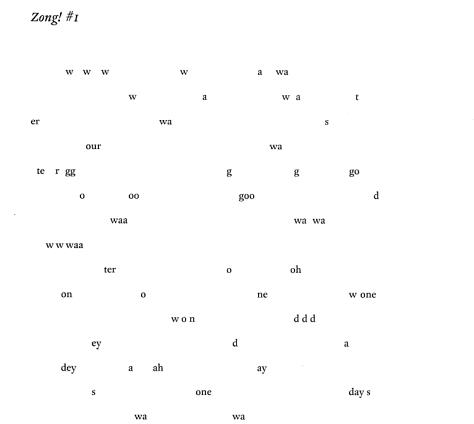 Other presenters touched upon exciting themes such as gender and space (Rosa Campbell, University of St. Andrews), democracy and poetics (Pierre Monot, Ludwig-Maximillian University), and the false binaries of prose/verse (Jack Belloli, University of Cambridge), as well as efforts to locate the self as Asian-American through a fictive piece about a poet who attempts the haiku (Jee Leong Koh, The Brearley School). The last panel of the symposium concerned poets with ties to both sides of the Atlantic, including Josh Robinson’s (Cardiff University) interrogation of the poetics of Andrea Brady, and Mohammad Shahidul Islam Chowdhury’s (East Delta University, Chittagong) comparative analysis of Alice Oswald and Brenda Shaughnessy, with Bridget Vincent (Nottingham University) discussing the role of ‘vicarious apology’ in Geoffrey Hill’s work.

In the concluding roundtable, the audience was treated to excellent readings by each participant: Sarah Howe read from her T.S. Eliot prize-winning collection Loop of Jade (Chatto & Windus 2015); Sandeep Parmar read from her powerful collection Eidolon, a re-visioning of the Helen of Troy myth (Shearsman 2015); and Oli Hazzard read new work which embodied his experiences of walking repeatedly up a hill as a form of psychogeography. The poets then gathered and sought to delve further into issues of race and diversity, whilst taking questions from the audience. When I asked a question about how Sarah and Sandeep, in particular, consider themselves in relation to the BAME label/category, Sarah discussed the potential problematics of irony when she experiments with self-orientalising or forms of chinoiserie in an American context that might be unwelcoming to such poetic endeavours, whilst Sandeep re-affirmed the importance of such a label/category to highlight the successes and challenges that continue to affect poets of colour in the UK. As Sandeep astutely notes in her seminal essay published by the Los Angeles Review of Books (2015): ‘Could a book like Rankine’s Citizen have been written by a British Black or Asian poet about a daily experience of racism and racial violence? And who would have had the courage to publish it here, recognizing in it a deeper and more potentially divisive critique of imperial oppression and post-colonial exclusion closer to home?’ Ultimately, the conference served to highlight not only the multifariousness of poetic production since the year 2000, but more importantly, how poets and literary critics from the U.S.A., Europe, the Caribbean, Asia, and Africa conceive of their evolving literary concerns and cultural relationships in a rapidly globalizing world.

Book Review: American Unexceptionalism - The Everyman and the Suburban Novel after 9/11 by Kathy Kna...
Book review: The Presidency of Donald J. Trump: A First Historical Assessment
Book Review: 'Who Rules the World?', by Noam Chomsky

A poet from Hong Kong, Mary Jean is currently a PhD candidate in Creative Writing and Research Associate at the Royal Holloway Poetics Research Center. Her work has appeared in The Poetry Review, The London Magazine (online), PN Review (forthcoming), Ambit Magazine, The Rialto, Callaloo Journal, The Scores: A Journal of Poetry and Prose and elsewhere. Mary Jean is currently shortlisted for the 2017 Forward Prize for Best Single Poem, and is a Co-Editor at Oxford Poetry.
View all posts by Mary Jean Chan →
Tagged  Gender, Poetry, Prizes, Publishing, Race, Transatlantic.
Bookmark the permalink.