‘Beyond the Graphic’ – Considering Violence, Sexuality and Obscenity in Comics: Beyond the Refrigerator: Superheroines and Sexual Trauma as Disability

By Saljooq Asif May 8, 2017 May 5, 2017 Research, Special Featured Blog Series, ‘Beyond the Graphic’ – Considering Violence

First published in 1988, Batman: The Killing Joke is regarded as one of the most controversial graphic novels of all time. Much of the criticism revolves around the violence inflicted upon superheroine Barbara Gordon/Batgirl, who is shot and sexually assaulted by the Joker. According to writer Alan Moore, the decision to paralyze Gordon received little pushback from editor Len Wein, who approved it, saying, “Yeah, okay, cripple the bitch”. (Figure 1) Although Moore has distanced himself from the story in recent years, the controversy surrounding his graphic novel remains. A 2016 animated film adaptation received mixed reviews, with many criticizing the role of Gordon as a sexual object, disabled at the hands of the Joker. 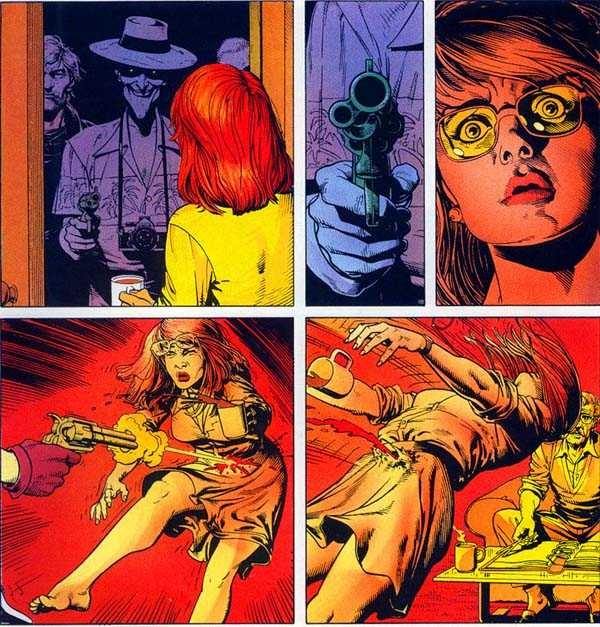 Figure 1 – Barbara Gordon escapes with her life but is left with significant trauma, in The Killing Joke (1988), by Alan Moore and Brian Bolland. Reproduced here under fair dealings provisions for academic purposes. © DC Comics

The Killing Joke is one among many superhero comic book stories that perpetuate the trope of “women in refrigerators.” Coined by writer Gail Simone in 1999, ‘women in refrigerators’ refers to the tradition of sexualized violence against female characters. According to Simone, women are “fridged” when they are “shown as only victims or hostages, when they are raped or murdered for cheap shock value, or for the effect their assault will have on the male character’s story.”[i] Indeed, women are not only objectified, but also serve as a tragic plot device to further the hero’s storyline. Such was the case in the infamous Green Lantern (1994), in which the titular protagonist discovers the corpse of his girlfriend Alexandra DeWitt stuffed inside a refrigerator. The namesake of “women in refrigerators,” DeWitt’s murder foments the Green Lantern’s desire for revenge. (Figure 2)  Another prominent example of female suffering that propels male development is the death of Gwen Stacy in The Amazing Spider-Man: unable to save her, Peter Parker/Spider-Man is devastated and must learn to live without her.

The issue of “women in refrigerators” becomes more complex when analyzed through the lens of superheroism: whereas superheroes emerge victorious after enduring violence and trauma, superheroines are irreversibly damaged and traumatized, often in a sexual manner. Batman is a particularly unique example: not only is his broken spine healed and mobility restored, but his Dark Knight persona is also deeply rooted in his horrific childhood. As psychologist Richard Warshak writes, Batman’s “trauma is the raison d’être and driving force behind his life’s drama.” Batman’s female companions, however, are unable to survive their respective traumas. Stephanie Brown/Robin is tortured by the Black Mask and suffers a sexualized death, while Barbara Gordon is shot through the spine, disabled, stripped, and photographed by the Joker. In comic books, sexual trauma represents not only the prototypical trauma of any superheroine, but is often the only way that female superpower can be understood. 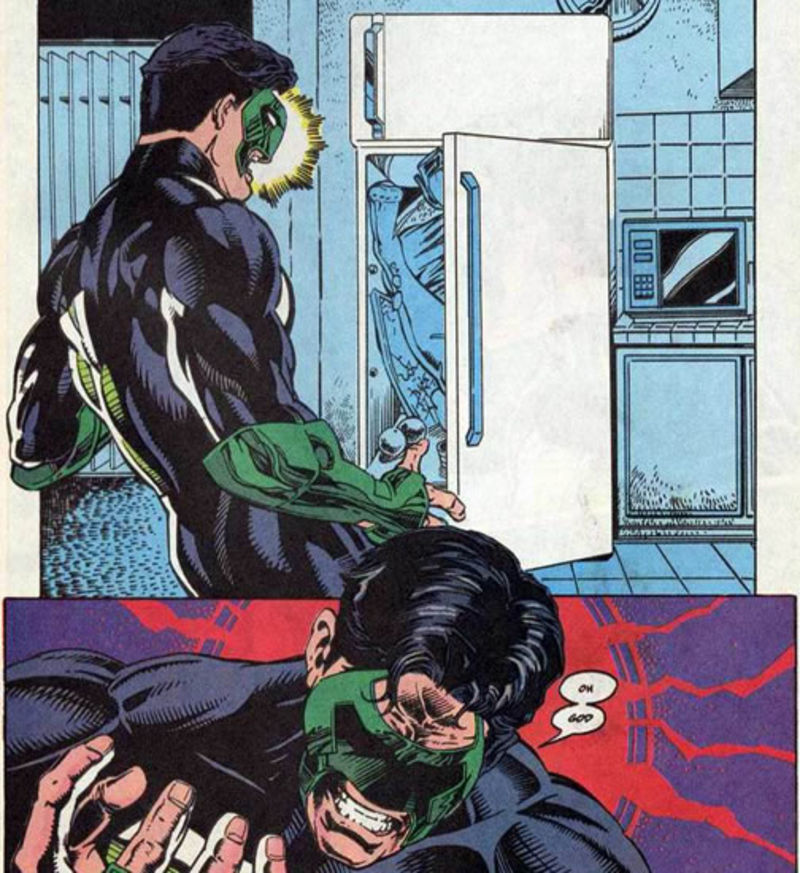 Figure 2 – Kyle Rayner finds his disarticulated girlfriend in the fridge and thus a trope is born, in Green Lantern #54 (1994), by Ron Marz and Aucoin. Reproduced here under fair dealingsprovisions for academic purposes. © DC Comics

Although The Killing Joke “fridges” Gordon, subsequent stories have defied convention by refusing to limit her to her sexual assault or paraplegia. In 1989, Gordon’s character broke barriers when she assumed the identity of Oracle, a wheelchair-bound computer expert and information broker. Gordon’s turn as Oracle is significant because the disabled body has traditionally been a feminizing force in comic books.[ii] Deformed and disabled women, in particular, have often been regarded as monsters.[iii] Gail Simone deserves the most credit for pulling Batgirl out of the proverbial refrigerator in ‘The New 52,’ launched by DC in 2011. Under Simone’s direction, the traumatic events of The Killing Joke are neither dismissed nor lessened; rather, they take on a deeper meaning as Gordon struggles with post-traumatic stress disorder. Although this incarnation of Gordon regains her mobility and reassumes her Batgirl identity, she is only able to do so after extensive psychotherapy and physical therapy. Even after contributing to the exhaustive list of “women in refrigerators,” Gordon triumphantly liberates herself from the sexist trope. Gordon’s violation at the hands of the Joker becomes integral to her character development, transforming her into a superheroine whose strength emerges from living with disability.

Gordon is among an increasing number of female characters whose empowerment—even “superempowerment”—emerges from sexual violence. In 2015, Marvel released the critically acclaimed television series Jessica Jones, based on the superheroine of the same name. The first season follows Jones, a woman with superhuman strength, as she struggles with PTSD and is relentlessly tormented by the villainous Kilgrave. With powers of mind control, Kilgrave is a rapist who psychologically and sexually abuses Jones. In an interview with Variety, executive producer Melissa Rosenberg claims that she refused to indulge the “women in refrigerators” trope or use sexual assault as a plot device, instead opting to showcase female character development: “It’s lazy and dull storytelling, if nothing else. We have this rich, complex female lead and we are looking at what happened to her from her perspective.” Jones is abrasive, sarcastic, and abuses alcohol, but she connects with people who have been violated by Kilgrave and inadvertently creates a therapy group for these survivors. Although Jones defeats Kilgrave, the effects of her abuse linger and will likely play a role in Jones’ future character development. Jessica Jones ultimately abandons the “women in refrigerators” trope in favour of a realistic portrayal of trauma.

The phenomenon of superheroines confronting trauma has expanded beyond traditional comic books as well. The final season of the Nickelodeon television series The Legend of Korra is dedicated to the main heroine’s recovery as she grapples with her severe trauma. After relearning to walk and facing her past, Korra reveals, “I am finally able to accept what happened, and I think that’s gonna make me stronger.”[iv] While the violence Korra endures is characterized by sexual undertones, the 2014 graphic novel Priya’s Shakti goes further by explicitly focusing on rape. As a rape survivor, Priya uses her experience to champion women’s rights and educate her Indian village. Priya’s Shakti may be fiction, but it functions as a sociocultural tool that combats gender-based violence in reality.

The trauma of these superheroines can be interpreted as the basis of a neo-disability narrative. It is driven by social and gender inequality; their powers emerge from living with trauma, avoiding the simplistic trope of “overcoming” disability. Rather than remaining “women in refrigerators,” these visionary heroines discover agency, ultimately making meaning of their own sexual trauma.

[ii] José Alaniz, Death, Disability, and the Superhero: The Silver Age and Beyond (Jackson: The University Press of Mississippi, 2014), 30.

[iv] The Legend of Korra, “Beyond the Wilds,” directed by Ian Graham, written by Joshua Hamilton, Nickelodeon, 2014.

Alaniz, José. Death, Disability, and the Superhero: The Silver Age and Beyond. Jackson: The University Press of Mississippi, 2014.

The Legend of Korra. “Beyond the Wilds.” Directed by Ian Graham. Written by Joshua Hamilton. Nickelodeon, 2014.

“An Eagle On His Button”: How Martial Portraiture Affirmed African American Citizenship in the Civil...
Book Review: Slavery in American Children’s Literature, 1790-2010 by Paula T. Connolly
US History as Myth-Busting

Saljooq Asif holds a Master of Science in Narrative Medicine from Columbia University and a Bachelor of Science in Biology and English from Boston College. He has a background in heath journalism and is interested in the media’s portrayals of race, gender, and socioeconomic class with regard to healthcare. His work has appeared in Intima: A Journal of Narrative Medicine and Journal of Literary & Cultural Disability Studies (forthcoming).
View all posts by Saljooq Asif →
Tagged  American comics, C20, Gender and Sexuality.
Bookmark the permalink.