‘Beyond the Graphic’ – Considering Violence, Sexuality and Obscenity in Comics: Disavowal of the Innocent: ‘Sally the Sleuth’ and the Survivor Narrative

By Christopher Maverick May 3, 2017 May 3, 2017 Research, Special Featured Blog Series, ‘Beyond the Graphic’ – Considering Violence

For comic scholars who recognize this quote, it might elicit a reluctant smile and almost certainly an exasperated sigh. For those unfamiliar, it is the dialogue from a single panel reproduced in Frederic Wertham’s exposé on the dangers of comics, Seduction of the Innocent (Figure 1).[i] An unsuspecting milkman discovers a woman’s corpse seductively prone on her front lawn. A trickle of blood from her temple and her torn and disheveled dress lead Wertham to the simple caption, ‘A girl raped and murdered’. To Wertham, this out-of-context image was indicative of the glamorization of sex and violence in 1950s comics. He believed comics both provided a ‘blueprint’ for juvenile delinquency and conditioned children to yearn for the thrill of a life of crime. While we may have progressed beyond his xenophobia towards the medium, we may be inadvertently repeating his mistakes. 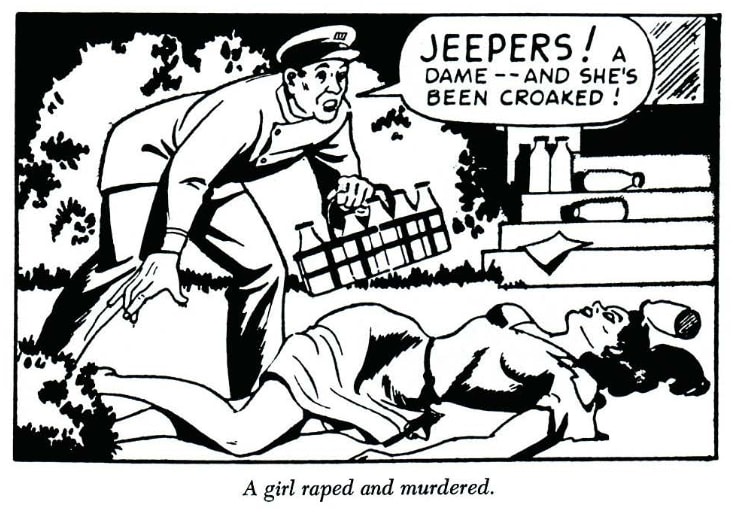 Wertham’s 1954 testimony before the United States Senate Subcommittee on Juvenile Delinquency led to the formation of the Comics Code Authority (CCA). Among the regulations the CCA adopted was the complete censoring of explicit sexual content and any ‘sadistic’ or ‘lustful’ crimes.[ii] Comics could no longer provide a blueprint for rape because they were prohibited from addressing sex altogether. While some CCA guidelines loosened over time – and were finally dissolved entirely in 2011 – the stigma associated with depictions of sex in mainstream comics, particularly in a violent context, has remained.

I do not mean to suggest that contemporary comics are exempt from displaying aspects of ‘rape culture.’ In fact, the opposite is true; CCA regulations were so mired in an idealized 1950s vision of patriarchal heteronormativity that strict gender roles — and the resulting objectification of female characters — were nearly unavoidable. The CCA prohibited displays of sexuality and mandated that romantic relationships strive towards marriage and domesticity. Since most CCA approved comics featured male protagonists (particularly in the superhero genre), female characters were generally relegated to secondary roles, often as girlfriends or wives, and in effect, damsels-in-distress to be rescued. While sexual violence was forbidden, nonsexual violence and even murder were allowable, so long as they were ultimately punished. By the 1980s, the decidedly innocent CCA-approved narratives of the 1950s seemed dated and overly childish. Therefore, in order to portray a male villain as truly heinous and unredeemable, writers often had him murder a female character. This became so commonplace that when Alexandra Dewitt was murdered and mutilated in Green Lantern vol. 3 #54 (1994), Gail Simone coined the trope ‘Women in Refrigerators’, in reference to where Dewitt’s body was found.[iii]

In the last decade, the ‘Big Two’ American comic publishers, Marvel and DC, have made concerted efforts to diversify their stories and correct the ‘Women in Refrigerators’ problem. However, because the mainstream industry avoids sexual narratives in general and sexual violence in specific, it has fallen into a practice of not only avoiding the conversation surrounding rape, but retconning its survivors’ tales. In perhaps the best-known case, Batman: The Killing Joke (1988) featured the Joker sexually assaulting and maiming Barbara Gordon, aka Batgirl.[iv] In 2011, DC rebooted their continuity, leaving it ambiguous how much of this story remains canon. Similarly, in Avengers #200 (1980) Carol Danvers, aka Captain Marvel, was kidnapped by an extra-dimensional being, brainwashed into being his paramour and impregnated.[v] The character’s history after that point included deeply troubling issues with alcoholism and recovery. In 2013, Marvel Comics wiped Danvers’ memory leaving her no emotional connection with her past[vi]; the rape has not been referenced since. In 1987, the villainous Phantom Rider drugged Bobbie Chase, aka Mockingbird, into becoming his lover in West Coast Avengers.[vii] Mockingbird’s 2016 self-titled series reveals that she was aware of what she was doing but used the drugs as an excuse to cheat on her husband.[viii] The implication is that adultery is more heroic than being a victim of assault. Each story inadvertently argues that rape victims are incapable of being heroes because to be raped is to be rendered powerless.[ix]

While attempting to portray women as more than prospective victims is commendable, the erasure of the survivor narrative is troubling. Susanna Davis argues that speculative fiction provides authors and readers an opportunity ‘to participate in a discussion of sexual assault, looking at the concept of rape from both an outsider’s point of view and that of the survivor in ways that differ from typical societal representations’ and warns of the dangers of silencing those voices.[x] If sexual violence is a problem, then comics’ only socially responsible choice is to address it. Women in Refrigerators cannot do this because of its finality; deceased female characters cannot progress beyond plot device because victims never recover from murder. They can recover from rape.

Unlike much of Wertham’s misleading — and sometimes wholly fabricated — evidence, his reading of the ‘Jeepers’ panel is fairly accurate. Although Wertham cites no source, the image is from the ‘Sally the Sleuth’ story in Crime Smashers #1 (1950).[xi] While the plot concerns a murder spree (the rapes, while implied, are never explicitly stated), Wertham neglects to mention that the narrative focuses on law enforcement attempting to solve the crime rather than the criminal himself. Not only does justice prevail, the comic takes an unusually progressive move for the time by featuring a female character as lead. Sally the Sleuth, at least in this story, is a fearless undercover detective investigating the murders of four young women. Determined to solve the crime before another woman is victimized, Sally tracks the suspect and offers herself as bait to lure him in. When the killer confronts her, Sally’s male colleagues are delayed in providing backup and she is forced to shoot her assailant in the chest (Figure 2). The story ends with Sally’s boss, ‘The Chief,’ congratulating her on another successful mission. In many ways, Sally’s story predicts the template used by 21st century police procedural television shows like Law & Order: SVU, where hardboiled female officers put themselves at risk to protect innocents. 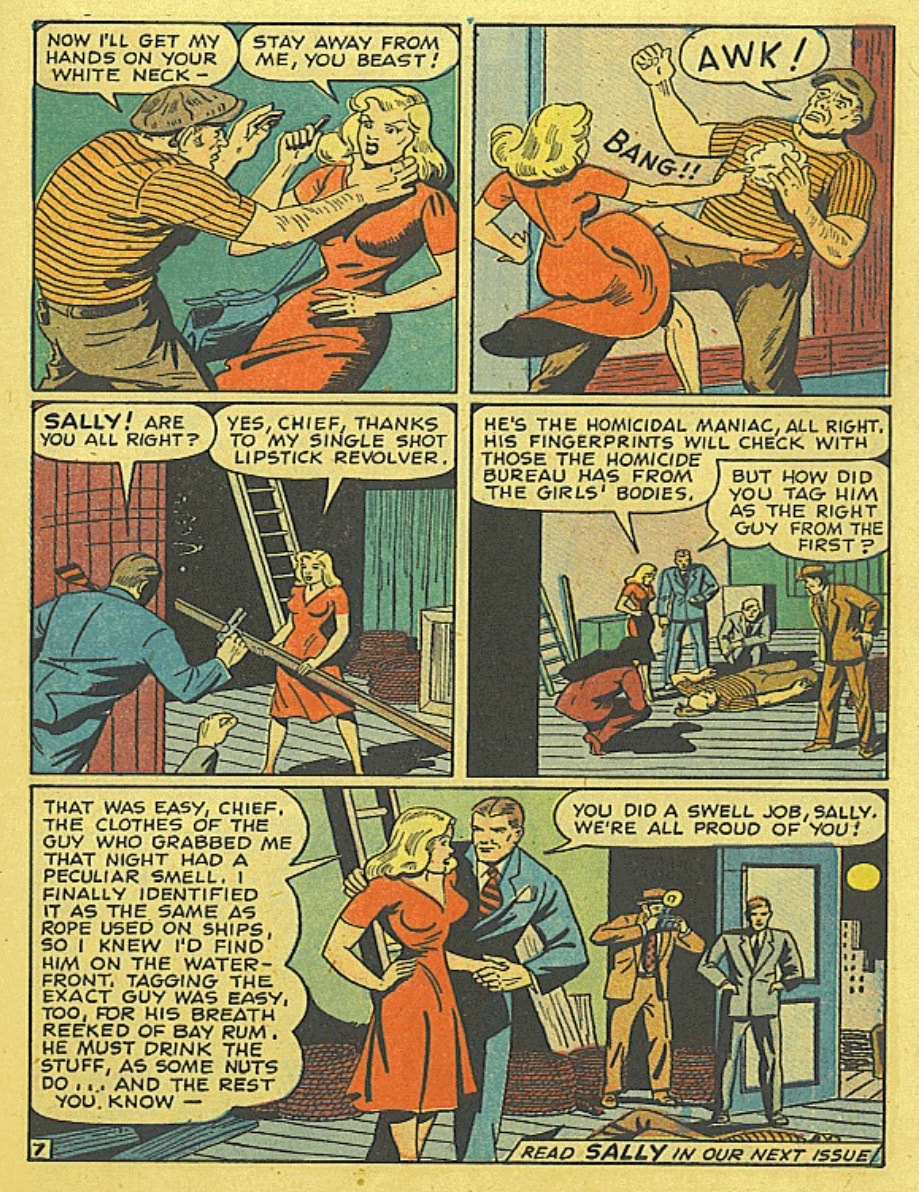 Though this was the first issue of Crime Smashers, it was not Sally’s first appearance. Adolphe Barreaux originally introduced her sixteen years earlier in a black and white strip in the pulp magazine Spicy Detective Stories. This Sally was not as accomplished a detective as her 1950 incarnation. From 1934 until 1942 her adventures followed a template where ‘the Chief’ assigned ditzy and naive Sally to investigate a case, she was immediately captured by her suspects, bound in ropes or chains, stripped and molested.[xii] Because this earlier Sally was not resourceful enough to defeat her male captors, she relied on ‘the Chief’ to rescue her in the final panels, only to be sent on a similar mission in the next issue (Figure 3). In effect, Sally is trapped in a cycle of sexual assault. 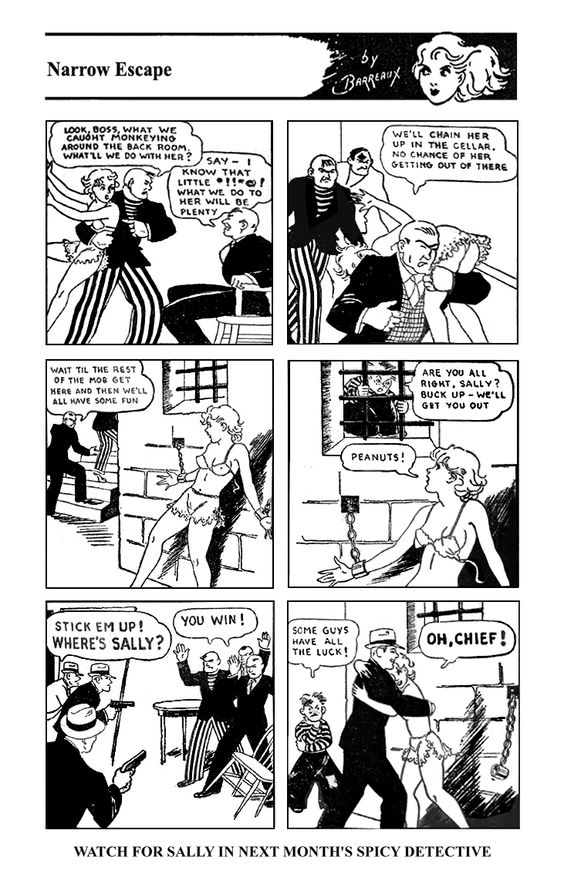 Figure 3 – An earlier iteration of the character saw her as a ditzy blonde who spent much time in only her underwear. Reproduced here under fair dealings provisions for academic purposes.

Sally only became a competent crimefighter once Barreaux moved the character to Crime Smashers eight years after its initial run ended. While no published story details her transition from victim to heroine, somehow the transformation takes place. Sally’s repeated sexual victimization seems to have inspired her to devote her life to protecting other women from similar fates.

Both versions of the character have their faults. The writing is dated, as one might expect, and even for that era, the storylines and dialogue are trite and stiff. However, in combination they show a progression in Barreuax’s exploration of sexual assault. While the earlier stories seek simply to depict sexual assault (and, admittedly, derive titillation from it), the later stories search for a solution. The solution is flawed; Sally can only compete in a male career because she is extraordinary beyond the average woman. Furthermore, reading the 1930s and 1950s versions in succession implies that Sally only develops her skills in the latter through her repeated abuse in the former; her victimization is her origin. Barreuax’s work may be mired in patriarchal sexism, but it is important that the medium be able to make this exploration.

Comics have come a long way since the ‘ten-cent plague’ that Wertham feared.[xiii] We do not worry that our children will commit suicide in a romantic quest to experience the glory of hanging or be driven to Satanism from reading the word ‘Zombie’ on a cover. Greater visibility for feminism, increased awareness of sexual assault and ongoing concern over Women in Refrigerators have drastically decreased the occurrence of violence against female characters as a plot device. And yet, sexual violence — one of the most prevalent issues facing our society today — remains underrepresented on the mainstream comics page. ‘Sally the Sleuth’ may have been a problematic narrative, but she symbolized the survivor as heroine — a concept that has now vanished. Have comics lost something by whitewashing rape from the medium? In ignoring the crime, do we disavow the victims? Is there no responsible way to address and explore the issue of sexual assault in mainstream comics? And, if not, then perhaps it is our responsibility to find one.

[i] Wertham, Fredric. Seduction of the Innocent. New York, Rinehart, 1954.

[ix] Of these three examples, only Batman: The Killing Joke was published without CCA approval. As such none of them explicitly mention the word ‘rape.’ In fact, the Carol Danvers story in particular, as originally written is supposed to seem romantic. However, each narrative involves physical or mental coercion into implied sexual activity and certainly fits the legal definition of rape or sexual assault. Fans and later writers have treated them as such.

Storify of our #bookhour twitter chat on GOD HELP THE CHILD by Toni Morrison
‘Unbelievable Originality’: Lining Tracks and Performativity in Zora Neale Hurston’s Folk Concerts
Meet the Curator: ‘Show Me the Money: The Image of Finance, 1700 to the Present’

Christopher “Mav” Maverick is a Ph.D. candidate in English at Duquesne University in Pittsburgh, United States. His primary research interests include issues of race, class, gender and sexuality in 20th and 21st century American popular culture, especially television, movies, professional wrestling and comic books. As an avid believer in active participant observation, he has written the web comic Cosmic Hellcats since 2008, and from 2003 until 2010 he competed as a professional wrestler… no really!
View all posts by Christopher Maverick →
Tagged  American comics, C20, Comics, Gender and Sexuality.
Bookmark the permalink.