The 2016 Irish Association of American Studies Postgraduate Symposium boasted a triumphant return to Cork following a number of successful conferences in the capital since 2011. The theme, ‘My Dream or Yours? Make America ______ Again’, was originally conceived in the hope of attracting a broader spectrum of scholarship, extending the parameters beyond the traditionally—if not intentionally—literature-oriented subject matter of recent IAAS conferences. The event sought to showcase emerging, early-career research in a number of disciplines and fields, alongside literature; among them, history, politics, screen media and computing. The title of the conference encouraged panellists, spectators and organisers to voice their hopes for the United States in an uncertain future; to read America’s projected ‘greatness’ in a multitude of different ways. Held in UCC’s celebrated Council Chambers, the conference’s diversity brought to mind the now-prescient message of last year’s postgraduate conference: ‘E Pluribus Unum: Out of Many, One.’

Following some preliminary remarks from IAAS Chair Dr Alan Gibbs and the customary registration formalities, the conference began with a foundational panel entitled ‘Make America Again.’ Revisiting the concept of the American Dream proved to be first on the agenda in Loretta Goff’s (University College Cork) illuminating analysis of In America (2003) and Irish Jam (2006). For Goff—as for directors Jim Sheridan and John Eyres—economic ambitions are replaced with social and family-oriented ideals in both films: the Sullivans’ need ‘to belong’ finds a vivid analogy in Sheridan’s film through E.T. the Extra-Terrestrial (1982). Goff also cited the results of a 2012 survey which indicate that material success is no longer directly proportional to emotional well-being for Americans, suggesting some parallels between these films and contemporary American society. UCC was also well represented in the opening session by Sean Travers, who urged us to reconsider the role of the reader in postmodern American fiction. Postmodernism—and its suspicion of totalising ideologies and metanarratives—leads to increasingly pluralised fiction: where the reader is permitted, and encouraged, to choose their own ending from many different alternatives. The reader, as a result, becomes an active co-creator of the text. In the case of trauma fiction or trauma-centred video games, the reader can be a potential culprit or accomplice insofar as they may be responsible for deciding the fate of certain characters.

Discussions of literature and film gave way in the second panel to pioneering papers that frequently combined history and technology, over which the figures of Edward Snowden and Julian Assange hovered somewhat spectrally (the ‘surveillance theme’ of the 2015 IAAS Conference, “Sight Unseen,” came to mind). William O’ Neill (University of Limerick) brought his background in archival work to bear on the outpouring of documents released by WikiLeaks since 2010 and by the Pentagon in 1971. Tracing the history of leaked material back to the Whiskey Rebellion in 1794 and the Mexican-American War in 1846, O’ Neill confidently revealed the challenges that this most recent leak—the largest in American history, consisting of ten million documents—poses to future researchers and historians. In particular, he commented on the policy of anonymity which WikiLeaks pursues, as well as its potential impact on the historiography of diplomacy. The deployment of multifarious genres for political purposes—including the prayer and the historical documentary—was another facet of the conference’s disciplinary diversity showcased in this panel. 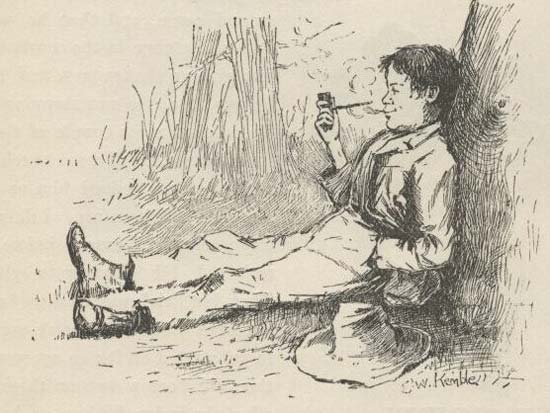 In order to accommodate a greater number of submissions and presenters, the conference, following the second panel, split into multiple sessions. The first of these, ‘Make America Play Again,’ focused on seminal literary figures, David Mamet and Mark Twain. Inspired by the questions of race and class raised in Was Huck Black? (1993) by Shelley Fisher Fishkin, Lucy Cheseldine (Trinity College Dublin) examined the liminal position of Huckleberry Finn in Twain’s ‘Great American Novel’ arguing that Huck moves within and beyond whiteness. Twain, through Huck, highlights the performative quality of both whiteness and blackness, even if in the case of blackness, it is a form of survival and not masquerade. In doing so, he creates a novel that is both entertaining and commentative: Twain’s observations about the construction of race and class in American society are counterpoised with moments of humour, Cheseldine suggested. Themes introduced in earlier sessions—such as race and surveillance—resurfaced in the penultimate panel, which asked ‘Whose Lives Matter?’ in a post-truth America. Sarah Cullen (Trinity College Dublin) skilfully explored the origins of gun ownership and gun control in America, along with their representation in Charles Brockden Brown’s novels of the 1790s. Cullen demonstrated that Brown’s fiction is remarkably prophetic: gun ownership in Edgar Huntly (1799), for example, is synonymous with patriotism, democracy and citizenship, as is often argued today. Furthermore, as Cullen reminded us, Brown experienced the divisiveness of gun ownership first-hand, with his own father arrested and interned for refusing to bear arms.

The event, overall, spoke to the high calibre of scholarship currently being undertaken in Irish universities and beyond, with each presenter delivering innovative, relevant and diverse contributions to their respective disciplines (and to the wide-ranging field of American Studies). While it was concerned with several problems facing contemporary America—sexual, environmental, governmental ‘threats,’ among others—it also provided potential solutions. Perhaps we, too, inspired by the titles and subject matter of various papers given throughout the conference, need to ‘reclaim subjectivity,’ ‘rethink our decisions,’ and, ultimately, ‘Make America Aware Again.’

​Eoin O'Callaghan​ is a PhD candidate in the School of English at University College Cork, Ireland, where he also completed his BA and MA degrees. His thesis focuses on William Faulkner's adaptation of short story material for the 'Snopes' Trilogy, and the consequences of this adaptation for Faulkner's representation of place and whiteness. He was the recipient of a Government of Ireland Postgraduate Scholarship in 2015, and teaches a number of undergraduate modules on the short story and Southern literature.
View all posts by Eoin O'Callaghan →
Bookmark the permalink.