Book Review: Presidents and Their Pens: The Story of White House Speechwriters by James C. Humes 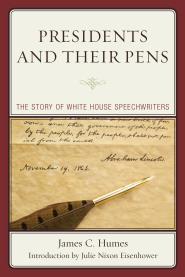 Presidents and Their Pens is a short book about presidents, presidential speeches and presidential speechwriters, in that order. In a vignette-like fashion, Humes discusses a president per chapter, twenty-three in total, analyses one of their speeches, and discusses the role of the speechwriter, if any. In the absence of an introduction or conclusion by the author, the central question or issue that Presidents and Their Pens addresses is left to be distilled from the individual chapters, which leaves this reader to conclude that it lacks a thesis or central argument entirely. If anything, the author’s agenda is to lower or raise certain presidents’ ranks amongst their equals, for instance by making the cases for Harding and George W. Bush, and passing less than positive judgments on the achievements of JFK and Obama (51-57, 95-103 & 145-19).

Most books by former presidential speechwriters, such as Ted Sorensen’s (JFK) Counselor and Peggy Noonan’s (Reagan) What I Saw at the Revolution take the form of memoirs and offer an insider’s perspective as their main advantage. Those works focusing on the institution of the presidential speechwriter at large, such as the multi-authorial The President’s Words and Robert Schlesinger’s White House Ghosts offer the historian’s advantages of distance and overview. James C. Humes’ contribution to this oeuvre seemingly endeavours to do both but the overall result is sadly meagre.

Where The President’s Words and White House Ghosts both focus on the twentieth century, in which the role of the speechwriter – after Warren G. Harding employed Judson Welliver as his “literary clerk” [1] – became a mainstay of the presidency, Humes daringly devotes the first six chapters of his book to nineteenth century presidents. Now one could argue what Humes merely implies and make the case that Alexander Hamilton was the first presidential speechwriter because he wrote for Washington (5), the general consensus seems to be that he was not. As Jimmy Carter’s speechwriter and New Yorker staff writer Hendrik Hertzberg quipped about the matter, “there was no White House back then, so by definition there could be no White House speechwriter”.

The book is at its best when it discusses the speeches and speechwriters of recent presidents, and the chapter on FDR is superb. On the whole however, Presidents and Their Pens falls short of its titular promise to being “the story of White House speechwriters” by virtue of barely covering speechwriters. Writing advice would have been “beneath” Thomas Jefferson (7); Grover Cleveland “would not let anyone else draft words to be delivered under his name” (31); it was “unimaginable” for Theodore Roosevelt to “ever employ any aide to write speeches for him” (35); and Woodrow Wilson “had too much intellectual pride to delegate any writing of speeches to aides” (41). Yet, curiously enough, all have their own individual chapter in a book purporting to deal with presidential speechwriters.

A second drawback of the book is that over forty percent of all footnotes refer to Humes’ previous works, among which his My Fellow Americans features most prominently. By the time the reader reaches the chapter on Wilson, only three of the sixty-nine footnotes encountered do not refer to this work. The murky ethics of such recycling aside, it brings into question the intellectual contribution offered in these chapters. Simultaneously, more precise references would both be appropriate and appreciated, especially where the author makes the outlandish claim that George W. Bush’s Second Inaugural Address “may have inspired” the Arab Spring (151). Such limitations aside, Presidents and Their Pens allows the reader to journey from John Quincy Adams’ work on the Monroe Doctrine (11-15), via Amos Kendall’s draft of Jackson’s Veto message on the National Bank (17-22), to the parts speechwriters played in crafting the more familiar tropes in the rhetorical history of the presidency, such as the ‘New Deal’ (68), FDR’s Fireside Chats (69), the idea of Eisenhower’s Farewell Address (87), the ‘Great Society’ (103), and the ‘Axis of Evil’ (149). Yet, the chapters stand relatively alone and due to the absence of an overarching narrative or argument, the singular “story” from the subtitle never quite materialises.

Those who seek a brief, generally well-written and easy read on some of America’s canonical presidents, and aren’t deterred by the well-trodden mythical narratives of Lincoln and the presidents of the early republic, will find an enjoyable read in Presidents and Their Pens. Those whose hopes are focused more on the pens than the presidents however, would be wise to seek the story of White House speechwriters elsewhere.

Review: 'American Communities: Between the Popular and the Political'
Review: War of the Worlds: Transnational Fears of Invasion and Conflict, 1870-1933
Patient Zero and the Making of the AIDS Epidemic by Richard A. McKay

Simon van Oort read US History, and Jurisprudence and Philosophy of Law at the universities of Oxford (MSt) and Leiden (LLM). He wrote his MSt dissertation on the origins and uses of the phrase 'Founding Fathers' (supervised by Dr. Gareth Davies) and his LLM dissertation on the history of the Dutch constitutional ban on judicial review (supervised by Prof. Andreas Kinneging). He currently works as a trainee legislative adviser and writes in a personal capacity.
View all posts by Simon van Oort →
Tagged  C20, Politics, Presidents.
Bookmark the permalink.