The Louisiana State Penitentiary and the Limits of Prison Rodeo Photojournalism 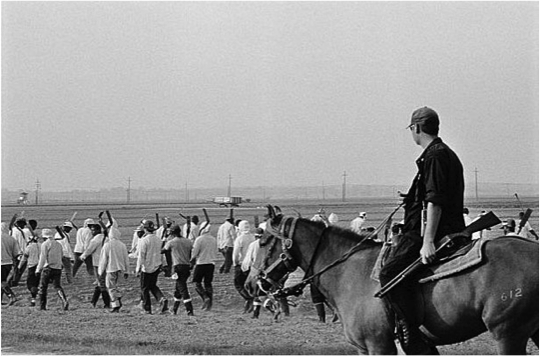 Chandra McCormick and Keith Calhoun, Angola State Prison, “Who’s that man on that horse, I don’t know his name, but they call him Boss,” 1980.

The Louisiana State Penitentiary, commonly known as Angola, is the largest and oldest maximum-security prison in the United States. Situated on eighteen-thousand acres of floodplain on the banks of the Mississippi River, Angola houses approximately five-thousand men, nearly eighty percent of whom are African American and all of whom have been sentenced to over forty years in prison for mostly violent crimes. Around eighty-eight percent of Angola’s captives will die within the prison’s walls. Built on the site of a former plantation, Angola is a prototypical penal farm: all able-bodied prisoners are still forced to till the penitentiary’s fields for as little as eight cents an hour. Angola is located not only in the state with the highest incarceration rates and some of the harshest sentencing laws in the United States, but also in the nation that imprisons a higher percentage of its citizens than any country on earth.

Some have claimed that Angola Penitentiary is the most frequently photographed prison in the United States. While there have been a wide variety of approaches to photographing Angola over the course of its history, the penitentiary’s contemporary visual discourse is dominated by photojournalistic depictions of its annual prison rodeo. These sublime spectacles of prisoners frozen mid-catapult after a violent confrontation with a bull neatly harmonise with the formalist sensibilities of photojournalists like Damon Winter, who routinely creates portrait photographs of celebrities for The New York Times. These images travel remarkable distances from their place of origin, dramatising the captivity and immobility of their subjects. 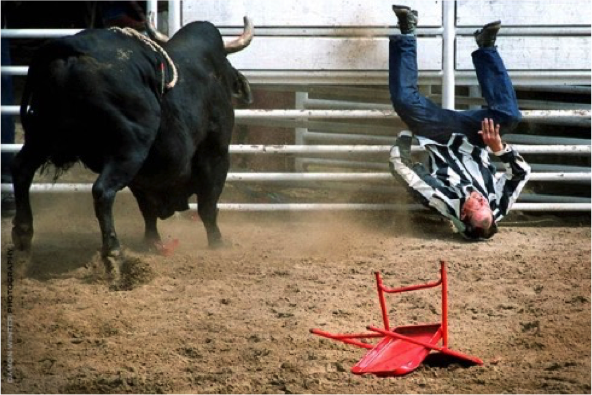 For decades, theorists have debated the ethical stakes of photographing subjects in an extreme state of powerlessness. Susan Sontag and John Tagg, for instance, argue that photographs only serve to reify existing systems of oppression and exploitation. However, in spite of these powerful critiques and their role in suppressing scholarship around documentary photography, images continue to be produced and circulated at unprecedented rates. Meanwhile, urgent political questions, and specifically those that surround America’s “prison industrial complex,” remain unanswered. What is at stake in photographing Angola is not simply a postmodern anxiety over the indexicality of the photographic document. Rather, these images are the channels through which political debates surrounding the role of the penitentiary in American political and cultural life are being articulated. In examining the ways in which photojournalists represent Angola, we can think through some of the critical impasses that currently afflict political discourse around the carceral state.

Every weekend in October, Angola hosts its famed prison rodeo. Formerly a quaint affair held to entertain prisoners and staff, the rodeo now takes place in an eight-thousand seat, covered arena that was build by the prisoners themselves, attracting thousands of spectators in an enormously profitable event that includes an Inmates Arts and Crafts Fair, bands, and carnival games. The “Wildest Show in the South” includes events like “convict poker,” in which four men sit at a table playing cards while a wild bull is released into the stadium. The last man sitting in his chair wins. While Warden Burl Cain argues that these events give prisoners an opportunity to interact with the public and to engage in healthy competition, scholars contend that the prison rodeo constitutes a type of “institutional tourism” that emphasises and then capitalises on the perceived “otherness” of the penitentiary and the exotic “inmate.” Competitors wear the black and white striped uniforms that have been banned since the 1950s, recalling the abject powerlessness of the “inmate” that some have argued amounts to a “symbolic flogging.” Moreover, the event draws an unparalleled quantity of photojournalists to Angola, generating a large number of images that are in turn embedded in articles by mainstream, liberal media outlets such as The Atlantic, The Guardian, and The New York Times, among many others. 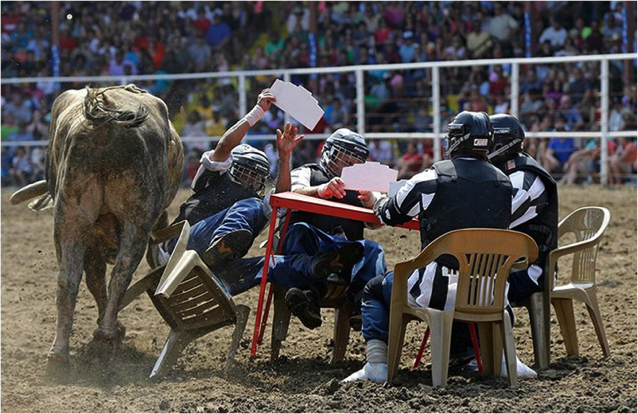 However, our current media landscape and political orthodoxy do not lend themselves well to the radical photojournalism of Jacob Riis and Dorothea Lange. As fewer media companies are owned by fewer corporate entities, and those that do exist increasingly rely on advertising and click-bait to compete in the Internet age, newspapers and magazines have maintained closer control over editing and presenting images. As a result, photojournalism is less likely to challenge the media’s increasingly rightward leaning sensibilities and, through it, the reigning neoliberal consensus. The prison rodeo photographs of Jana Asenbrennerova and Giles Clarke, among countless others, are not only circumscribed by the neoliberal, private media climate, but also tacitly reinforce the neoliberal doctrine in which these conservative, corporate behemoths have thrived. As resources for journalism across the board continue to decline, photojournalists privilege spectacle over substance and shock over extended contemplation—they are less likely than ever before to challenge the political and economic consensus that is the very source of their demise.

The limits of prison rodeo photojournalism stem not only from the current, highly consolidated media climate, but also from the rigorously controlled, intensely regulated nature of the event itself. Despite the wide variety of photojournalists who have been escorted around Angola’s rodeo by a team of prison officials, the images are remarkably consistent in both their form and content. The photographs slip easily into various subcategories: prisoners in striped uniforms holding hands with one another, praying before the first event; bodies splayed on the ground or flung into the air after a brutal confrontation with a bull; men happily mingling with one another on the side-lines. These images are often produced by freelancers who sell the images to myriad publications, relinquishing control of their work to corporate outlets. 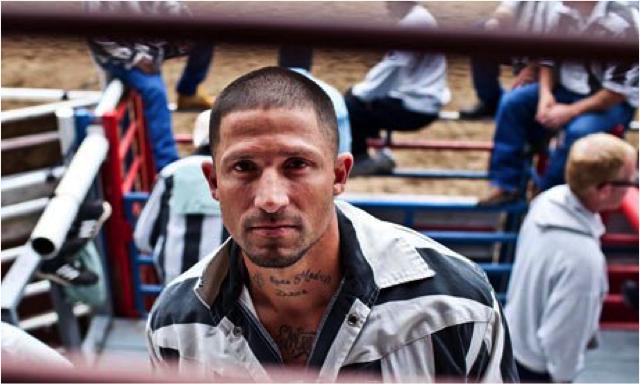 Thus, in order to appeal to corporate entities and compete for readers’ clicks, photographers must seek the lurid and the exotic in lieu of the quotidian banalities of captive existence. Most often, the images are utilised by liberal media outlets, such as The New York Times, who condemn the rodeo’s archaic violence “as close to the Roman coliseums as is available in the 20th century.” But although these articles and the accompanying photographs are right to emphatically oppose the event, they ultimately double down the spectacle of the rodeo, painting not only the penitentiary, but also the South itself as barbaric and uncivilised, isolating enduring national problems as regional aberrations. While these images may provide an initial shock at the anachronism of the event’s overt, corporeal brutality, they simultaneously serve to reify notions of the South’s “backwardness” in contrast to the North’s more “humane” methods of incarceration. 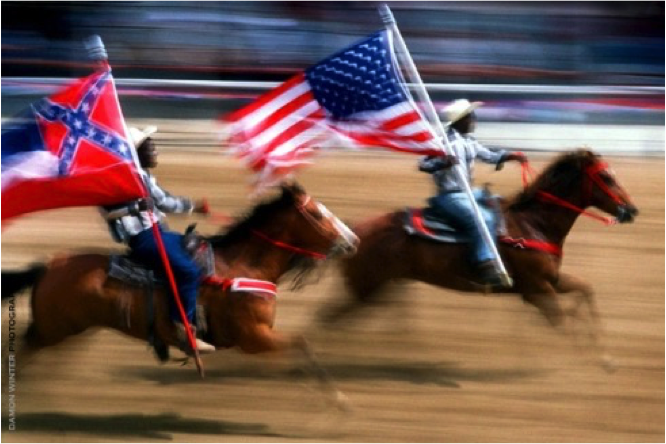 Rather than reframe the prison as intimately tied to the ways in which we define “free world,” thereby revealing its essential, neoliberal function as a house for deproletarianised African Americans, these photographs only deepen the yawning gulf that appears to separate Angola from the outside world. Such depictions do not offer a challenge to the state’s rendering of incarcerated individuals as exotic “inmates,” but indulge our fascination with the penitentiary’s wanton violence and heighten Angola’s perceived exceptionalism. The inadequacy of this current visual discourse to fully apprehend the historic systems of oppression and exploitation out of which modern day Angola has spawned embodies the larger failures of contemporary debates surrounding prison reform, which have become increasingly visible on the American political stage.

While intellectuals like Ta-Nehisi Coates and Michelle Alexander are correct in their assertions of the uniqueness of the white ruling class’s plundering of African Americans’ labour and capital, these thinkers fail to interweave antiracist arguments with critiques of larger systems of capital accumulation, miring their arguments in established neoliberal ideology. For instance, in Coates’ widely read article, “The Black Family in the Age of Incarceration,” he argues that the distorted legacy of the Moynihan Report and its subsequent pathologisation of the black family led African Americans to be incarcerated at such staggering rates. Although Coates is right to condemn the racist criminalisation of blackness and its role in deepening the socioeconomic chasm between black and white Americans, his desire for African Americans to secure “the right to labour” without challenging the way in which labour is bought and sold on the free market merely reifies liberal notions of equal opportunity and upward mobility.

The fact that prison reform has recently gained widespread support from politicians indicates that prison reform is not necessarily a radical idea. Most conversations around mass incarceration and in particular, those surrounding southern penal farms like Angola, only strengthen arguments for arbitrary and insufficient reforms that, like those enacted in the 1960s, aim to modernise the penal system and to make prison more “humane.” Rather than reiterate Lyndon B. Johnson’s aims for racial “fairness,” we must look to more radical alternatives to the prison system that fully come to terms with the prison’s continued relevancy to maintaining our social order.

In this way, we can turn to radical thinkers like Angela Davis who have refused to see the penitentiary as an inevitable evil, instead turning to prison abolition as a “vital means of expanding the terrain on which the quest for democracy will unfold.” It is only by calling into question and remaking the fundamental structures that undergird American political and cultural life that we will be able to make a document of civilisation that is not at the same time a document of barbarism.

Kentucky: Between Populism and Creationism
Playing Paranoid in The Lighthouse
Storify of our #bookhour twitter chat on GOD HELP THE CHILD by Toni Morrison