Throughout September we will be publishing articles detailing the experience and advice from winners of a number of grants and awards. The fifth post in our series is written by Alys Beverton, who gives a fascinating insight into her experience as a BAAS Postgraduate Travel Award winner.

When I found out that I had won the BAAS Postgraduate Travel Award my first feeling was, unsurprisingly, elation. As a student of nineteenth-century U.S. politics I viewed my proposed two week visit to the Library of Congress, Washington D.C., as a pilgrimage to my research Mecca. But beneath my excitement was a ripple of uncertainty. What if I did not find anything useful in the archives and returned home at the end of my trip with nothing to show for it? My supervisor seemed untroubled, even slightly amused by my concerns. “Just go and see what you find,” he told me, “besides, the most important part is just being out there.” As it turns out, he was absolutely right. For all the useful sources I gathered during my time in D.C., of infinitely greater value was the experience of living in a place that I had spent so much of my time only reading about. My visit gave me a deeper understanding of American society, both past and present, and enabled me to better imagine the world which my historical subjects inhabited – the sights, sounds, and smells of their everyday lives. This in turn has helped me to understand them as real people and to write what I feel to be richer, more faithful histories of their experiences.

Before I left for D.C. I drew up a rough timetable for my visit and set aside some time to explore the city. The hours I spent pounding the sidewalks turned out to be the most memorable part of my trip. Washington D.C. was established expressly to serve as the U.S. capital, and this is evident in every inch of its design. Downtown the buildings are built in the neo-classical style – large, white, columned, and imposing. Each vantage point gives another stunning panoramic view of the city, a vista of domed ceilings rising up from a canopy of cherry blossom trees.  Beyond soaking in the atmosphere, I had a hit-list of landmarks I was determined to see, including the White House, the Supreme Court, and the Lincoln Memorial. The real thrill I got from visiting these places was the feeling of being transported back in time. As a student of nineteenth-century America based in England, I occasionally feel not only temporally, but geographically removed from the society I study. When I looked up at the grand façade of the Capitol Building, it therefore struck me that this was the same view the politicians I study would have seen over 150 years ago when they convened for Congress. The thought made me feel somehow closer to them, as though I could now begin to build a more accurate picture of their lives in my mind. 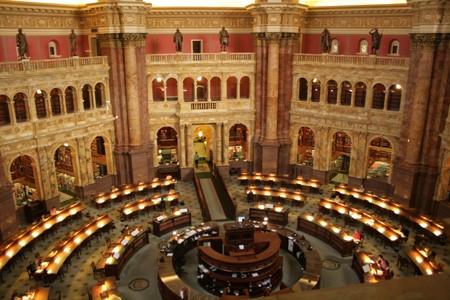 The Main Reading Room at the Library of Congress: A pretty inspiring place to do some work. Photo Credit: Alys Beverton

This feeling was strengthened by my time in the archives. Before my arrival I looked up the Library’s registration process and used its online catalogue to compile a list of sources I wanted to see. This minimised the chance of any nasty surprises (“what do you mean the special collections room is closed for refurbishment?”) and maximised my time in the reading rooms.  This was fortunate because, contrary to my fears, the Library held masses of fascinating material. For two weeks the contents of a treasure trove of historical materials passed over my desk in conveyor-belt fashion – political pamphlets and posters, memoirs, reports, diaries – so many that I gave up trying to read them all and took photographs instead. I should perhaps also admit that I had some help mining these archives.  If you spend two solid weeks in a single library, chances are you will get to know the people who work there. I befriended one librarian, Stephen, who after learning my research interests took it upon himself to do some digging on my behalf. He brought me what is unquestionably the most curious source I came across while in D.C.; the minutes of a meeting held in 1882 in New York by a gentleman’s political club dubbed the “The Old Fogey’s Association.” Only Stephen’s intimate knowledge of the Library’s archival system could have dug up such an historical oddity.

This was one of many incidents whereby I stumbled across something unexpected. Before D.C. my research practices largely consisted of reading digitised newspapers from a computer screen. After spending hours rifling through the Library’s manuscript collection, I realised what I had been missing out on. Using the keyword searches of online databases is an efficient way to find materials that I know I need. However, it also means I skim past an awful lot of articles and texts which are not necessarily relevant to my research topic, but which might be valuable nonetheless. Being in the archives gave me the freedom to explore such unusual avenues, and to pursue unlikely leads.  I began to enjoy the feeling of not knowing what I would find in the next box I called up from storage. Sometimes a folder labelled simply “Misc.” would contain a stack of unpublished essays by a prominent politician. Other times I might find only the letters of an irritable congressman to his mother back in Pennsylvania, complaining about the sticky Washington summer heat.  Unexpected triumphs encouraged me to push the boundaries of my research and investigate aspects of my subject which I might otherwise have ignored. Yet even the dead-ends, the mundane and apparently unimportant sources, had their uses. Holding the letters of nineteenth-century politicians humanised them for me. And while the trivia I learned from their private correspondence will never make it into my final thesis, those details added depth to their characters and renewed my sense of interest in their lives. 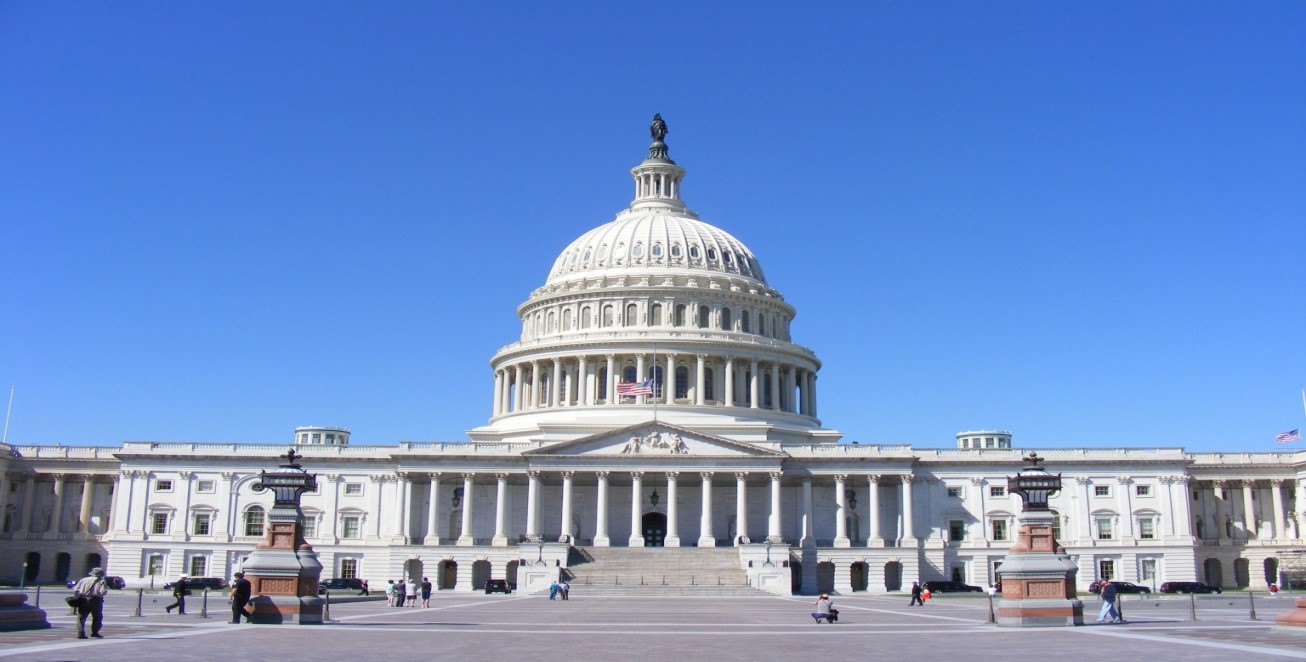 The Capitol Building (where Congress convenes): This was the view Alys had each day whist she ate her lunch on the benches outside the Library of Congress, which is directly opposite. Photo credit: Alys Beverton

Another memorable part of my trip had little to do with my PhD, at least not directly. As a visiting researcher I occupied a curious role in the city. To be sure, I gushed over iconic landmarks and stood in long queues to get into museums like any other tourist. But I also lived the life of a regular Washingtonian. I stayed in accommodation in a residential part of the city, commuted each day on the metro, and bought my food from the local supermarket. My research was like a job; it gave me a stake in the city and a feeling that I was a cog spinning in the workings of its larger machinery. I had gone from distant observer of, to active participant in, American society (at least temporarily). Just like reading centuries-old handwritten letters, or ambling down the National Mall, the experience strengthened my connection with the place and people that I study. This has had a subtle but lasting impact on how I view my PhD project. No longer a student analysing her subject from afar, I now feel closer to being a legitimate researcher of U.S. history, someone with a genuine knowledge of and affection for the country who can make a meaningful contribution to how we understand its past. So while after two weeks in D.C. I left with a memory stick full of sources, undoubtedly the most valuable things I took away with me was a new appreciation of the United States, a deeper understanding of its history, and a renewed passion to continue my efforts to learn more about both in the future.

For more information about the awards, prizes, and grants offered by the British Association for American Studies, please visit here.

Sea Birds, Castaways, and Phantom Islands off Newfoundland
Gatekeeping Country: An Ethnographic Study of Female Country Music Performers in the 21st Century
Meet Me at the Fair: the Native-American Model School, the Philippine Reservation and Maintenance of...

Alys Beverton is a PhD candidate at University College London. Her thesis focuses on perceptions of Mexico in U.S. political discourse from 1863 to 1896. She is particularly interested in how U.S. Americans constructed images of Mexico as a way of expressing different interpretations of their own national identity. She also examines how ideas about the United States' hemispheric role intersected with and influenced the process of disunion and reunion in the United States during the Civil War era.
View all posts by Alys Beverton →
Tagged  Advice, Applications, Awards, C21.
Bookmark the permalink.