‘Is It Because I’m Black?’: The Music Industry, Image, and Politics in the Careers of Syl and Syleena Johnson

Throughout June 2016, U.S. Studies Online will be publishing a series of posts to mark African American Music Appreciation Month. In the fifth and final post, Glen Whitcroft compares the similarities between Syl Johnson and Syleena Johnson’s music and careers.

Looking back over my false dreams that I once knew,

Somebody tell me, what can I do?

Something is holding me back,

In the aftermath of an intense decade of civil rights struggles, Syl Johnson, a blues singer and musician, released the anthemic and reflective “Is It Because I’m Black?” in 1969. Four decades later, his daughter, R&B singer-songwriter Syleena Johnson, recorded the song for her 2008 album Chapter 4: Labor Pains. The career trajectories of Syl and Syleena, although decades apart, followed a similar path of music industry politics, broken promises, and soured relationships. It remains to be understood then, how and why did a song written in the 1960s, laced with references to racism and prejudice, resonate with the career of an African American woman in the twenty-first century? 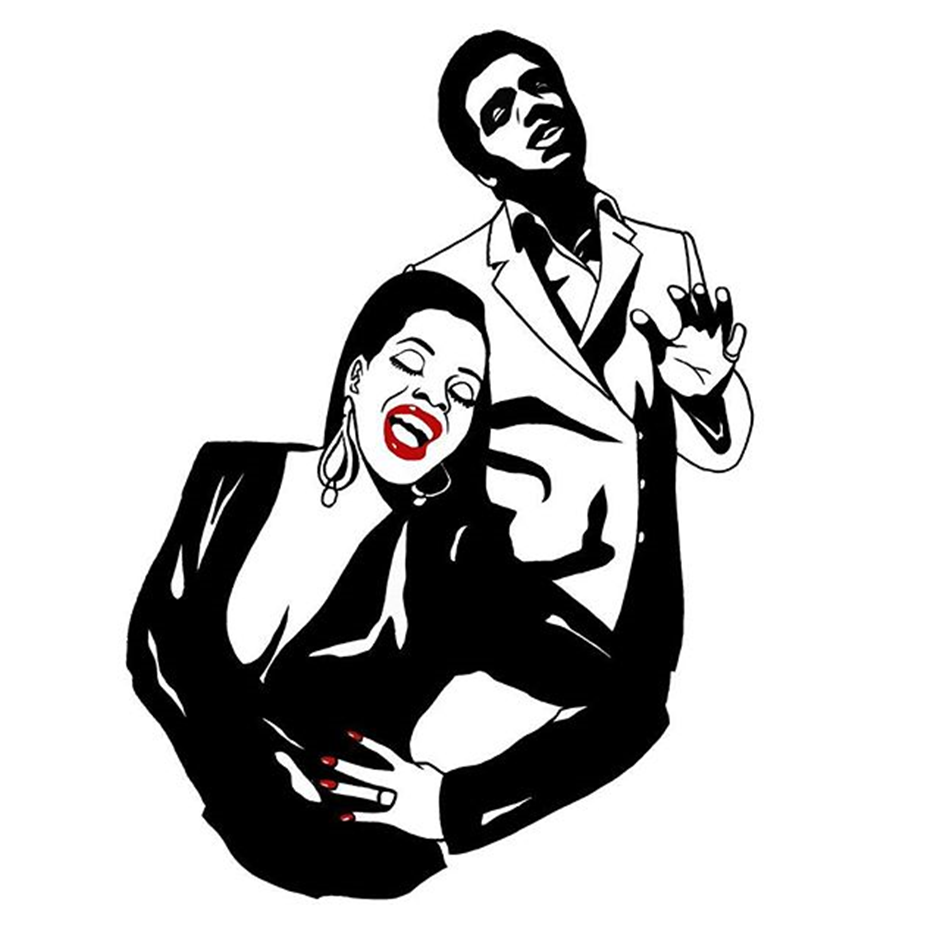 The careers of Syl and Syleena Johnson followed a similar trajectory despite being decades apart. (Credit: Son of Ellis)

Born in Holly Springs, Mississippi, in 1936, Syl honed his talents in Chicago, Illinois, associating with artists such as Magic Sam and Howlin’ Wolf throughout the 1950s. He pursued a recording career with Twinight Records in the mid-1960s, and eventually signed with the legendary Hi Records in the early 1970s. Syl’s career and influence is often overlooked in light of his contemporaries such as Sam Cooke and Al Green. However, a number of Syl’s records such as, “Come on Sock It to Me”, “Different Strokes”, “Is It Because I’m Black”, and “Take Me to The River”, were Top 20 hits on the R&B charts and made appearances on the Pop charts.

Syl’s career blossomed in an era where an emerging generation of white youths with strong political and economic views would be imperative to the success and development of R&B. Throughout the ‘60s and ‘70s Syl penned songs that reflected this racial climate in the US, and consequently, within the music industry. In, Music and Social Movements: Mobilizing Traditions in the Twentieth Century (1998) Ron Eyerman and Andrew Jamison noted that within this period, ‘[…] the proportion of the population under thirty was expanding in both numbers and importance. And the social movements of the 1960s were both a cause and an effect of this. The movements were fuelled by young people.’[2] Similarly, the black youth were becoming more active in finding their political voice, orchestrating sit-in movements and later the freedom rides. R&B strengthened this message, discussing the everyday lives of African Americans and detailing the pain they were enduring emotionally, physically, and economically. As an art form, R&B appealed to a wider, white audience, introducing them to race issues and pricking their conscience. Whilst Syl acknowledges this impact, he does so modestly, ‘I didn’t come with a militant protest. [Is It Because I’m Black?] touched directly to the heart and that put up a mirror to the bigots…It was not a violent protest on my part.’[3] 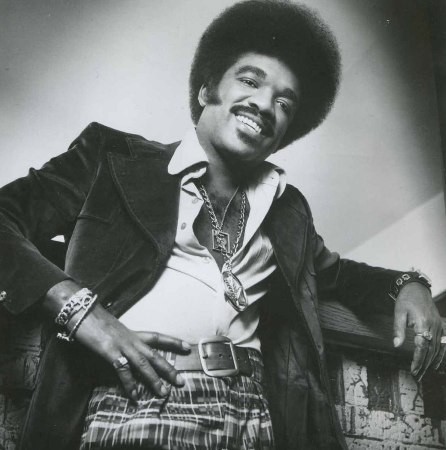 Despite a number of hits, Syl Johnson struggled to achieve a high level of success.

It was the discussion of economic deficiency within the genre that would resonate with certain parts of the white audience, who too fell victim to extreme poverty and hopelessness in the Southern US. Portia Maultsby, an ethnomusicologist, believes that, ‘through their texts, soul singers not only discussed depressing social and economic conditions for black communities but also offered solutions for improvement and change.’[4] Challenging white bigotry was fundamental to R&B’s contribution to the civil rights movement. Asking, ‘Is It Because I’m Black?’ was provocative, but necessary – and certain musicians were becoming increasingly vocal of the political and economic deprivation suffered by the black man.

Arguably, Cooke’s anthem was catapulted to the world stage through the controversy surrounding his murder eleven days prior to its release. Lyrics such as, ‘I don’t know what’s up there beyond the sky’ were perhaps more chilling in light of his murder, than as an expression of the civil rights struggle, as they are now known. Peter Guralnick suggests that Cooke’s, ‘matinee-idol good looks, liltingly graceful voice, sophisticated manner, and effortless delivery’ allowed him to reach the pinnacle of the Pop charts, whereas artists such as Syl struggled to find the same level of exposure, success, or connection with a wider audience.[6] In a documentary focused on Syl’s career, it was noted that, ‘he was grittier than Al Green and I think that could have been part of the hindrance.’[7] Cooke, along with the Motown roster, were arguably more polished and presentable to the mass white market; something that is often attributed to their success.

Syleena Johnson, born in September 1976, would eventually follow in her father’s footsteps and pursue a career in the music industry — to Syl’s disapprobation. Following a number of independent releases, including a collaborative album with her father, Syleena signed with Jive Records in 1998, and eventually released her first album, Chapter 1: Love, Pain & Forgiveness in 2001, working with the likes of Buddy Guy and R. Kelly. Syleena, much like her father, was unafraid to discuss serious issues in her music. This is particularly evidenced in, “Hit on Me”, an autobiographical account of domestic violence,

Just because you put a ring on my finger

Just because you put some clothes on my back.

Just because you gave me money for December

Doesn’t mean that I have to pay you back.[8]

Channeling the lamentations of “Peace in the Valley” with echoes of ‘I’m so weary, I’m so tired’, “Hit on Me” resonated with African American women across the US, who were disproportionately affected by domestic violence. In an interview with JET magazine in August 2001, Syleena explained her approach to vocalising personal experiences, ‘I didn’t take those fears and angers and turn them into bitterness…I turned them into something that I can share with the rest of the world’.[9] However, unlike other black women in the industry, her success did not harmonise with her level of talent. The intro to the second studio album with Jive Records, Chapter 2: The Voice, provides an insight into Syleena’s perspective,

One day I was feelin’ low down

(Was havin’) Bad thoughts like I won’t be around

(Was thinkin’) Maybe I should get out of this game

(I thought that) Nobody wanted to hear me sing

(I thought that) Nobody even knew my name

The pressures of image, particularly amongst female entertainers, was exacerbated by an increased importance of television and music videos in the promotion of music. Syleena recognises that an industry-wide emphasis on a specific ‘ideal’ body type rather than vocal ability has impacted on her own success,

I came into Jive Records in 1998, at that time, being very skinny and slim was the most praised body type… the entire industry was swayed by the model look – men didn’t have this stigma… the label didn’t believe I was marketable image wise as a woman… it put a dampener on how they promoted me as an artist… I wasn’t the stereotypical stick thin woman… I was a size ten… for the label that was too big.[10] 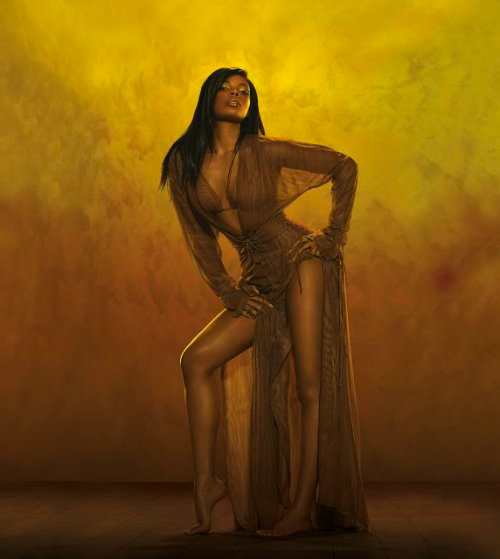 Following the release of Chapter 2: The Voice Syleena featured on the worldwide hit single “All Falls Down” from Kanye West’s debut album The College Dropout, which reached the Top 10 in both the UK and US. She also performed at the MTV Video Music Awards in 2004 which featured John Legend and Chaka Khan. “All Falls Down” sampled Lauryn Hill’s, “Mystery of Iniquity”, and is interpreted in Dawn Boeck’s chapter on, ‘Kanye Omari West: Visions of Modernity’, as a song that, ‘[…] explored themes of materialism and racism through the experiences of a young black female’.[11] Following its success, expectations were high for Syleena. It was thought that she could now break through the barriers that had, to that point, limited her crossover appeal. However, the release of Syleena’s final album with Jive Records, Chapter 3: The Flesh in September 2005 did little to infiltrate the elusive crossover market. Reflecting on this, Syleena claimed that,

I absolutely do not feel like they capitalised on the success of “All Falls Down”… Chapter 3 could have been huge! … It had great features and great records… I finally looked how they wanted me to look… and they didn’t even capitalise on that![12]

Image, for decades, has dictated success within the music industry, particularly for African American artists. As a black musician in the late ‘60s and ‘70s, Syl Johnson was deemed too ‘rough around the edges’ to be presented to white audiences. Similarly, throughout the 2000s, his daughter fell victim to music industry ideals of body image. Beyond this, both artists were fearless in their objectives to record and release music with content that, although arguably not marketable to wider mainstream audiences, was honest and reflective of the lives and struggles of African Americans within their respective eras.

Glen Whitcroft is a current PhD student at Northumbria University, working under the supervision of Professor Brian Ward. His research interests are rooted generally in African American music, with emphasis on its social and political impact. Following on from research conducted with Catherine Clinton at Queen's University Belfast, his PhD research topic is entitled 'We Shall Overcome: Music, Protest, and the Quest for Civil Rights in the United States and Northern Ireland, 1955-1975.'
View all posts by Glen Whitcroft →
Tagged  African American Culture, Black History, C20, C21, Media, Popular Culture.
Bookmark the permalink.