Configuring The Dream Factory: Prince Fans and Destabilisation of the Album in the Digital Age

Throughout June 2016, U.S. Studies Online will be publishing a series of posts to mark African American Music Appreciation Month. In the fourth post, Alex Jeffery continues the exploration of Prince’s cultural and musical impact by examining the influence the digital age has had on the album format.

The speed with which ‘Prince’s ‘Vault’ of unreleased recordings was drilled into after his untimely death felt shocking to many. The existence of ‘The Vault’, a locked room within Prince’s Paisley Park recording complex, has been well known for decades and is believed to contain thousands of unreleased Prince recordings, as well as a collection of unseen music videos.[1]  However, the promise of authorising material that fans have been making their own for a considerable amount of time has refuelled discussion. Notably, on the principal fan site Prince.org many have been debating what they wish to see released, despite the uncertainty around Prince’s real (and often contradictory) intentions.

Prince bootlegs have been sold in physical form for a number of years. The withdrawn, The Black Album quickly became one of the most bootlegged albums of all time when vinyl copies of leaked masters began circulating in 1987.[2]  In the digital era, new types of artefacts – which Prince could not have imagined back in his mid-1980s heyday – are the main objects of exchange. Large file torrents and fan ‘remasters’ have been circulating more widely as broadband becomes standard. In Prince’s case, torrents have enabled fans to rapidly acquire the huge repositories of rare and unreleased material that form only part of ‘The Vault’. While – at the time – unreleased albums had definite, unambiguous track listings, a particularly revered period in Prince’s recording history (c. 1985-1986) encompasses several other unreleased album projects. 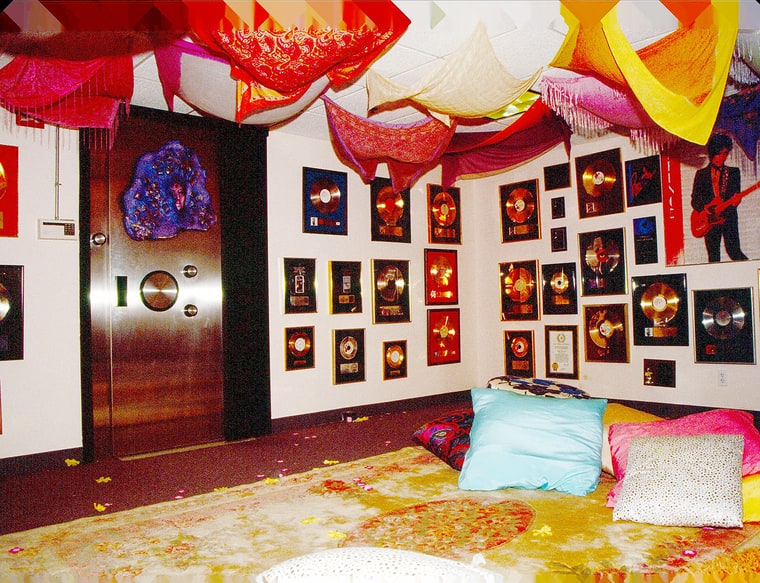 These albums no longer need to be assembled physically: sequencing and re-sequencing them on media players such as iTunes can for some fans be as pleasurable as owning a physical artefact.  In his paper, ‘Collecting Music in the Digital Realm’[3], Tom McCourt argues that possessing digital files can be ‘a more intense and intimate experience’ than owning the physical recordings as, ‘the lack of materiality in digital files heightens our sense of ‘ownership’, as well as our desire to sample, collect, and trade music in new ways’ (2005, p.250).

Emblematic of these practices is Dream Factory (1986), a scrapped follow-up to Parade (1986), which had substantial input from Wendy & Lisa.[4] Containing many widely-regarded songs, it has been the subject of much speculation and fetishisation from both fans and biographers. Prince archivist Per Nilsen[5], has provided evidence that the album went through three configurations. These were (in order) a single album, then a double and finally a longer, slightly altered double (see Figure 1), many of whose tracks were ultimately released on Sign ‘o’ The Times the following year.[6]

However, actualising the real Dream Factory remains something of a holy grail for Prince fans: the three known configurations of the album mean that, even if you put your faith in this knowledge being accurate, there is still no definitive configuration to aim for. All the songs are accessible online in some form, although as many were released officially on Sign ‘o The Times, or later ‘vaults’ albums, the sound quality varies greatly from track to track. To further confuse issues, other fan favourites such as “Power Fantastic”, recorded during the era but not intended for Dream Factory, are often also included in fan track-listings. Dream Factory has thus become the ultimate fan album: not the album that Prince intended, but a ‘greatest hits’ of unreleased recordings from 1985-6 that would rival any of Prince’s official album releases from this period.

For some fans, these personal configurations are anything but secondary to official album releases. On a thread titled ‘My Personal Dream Factory Configuration’[7], user Romeoblu states that his own 22-track version, which would struggle to fit onto two LPs, is his most listened to Prince album. Personal preferences and stamina for album length may also be reflected in these choices. User Nivivrus posts several permutations of track-listing on the same thread, before settling on one which includes her favourite tracks, while still managing to be, in her own words, ‘short and sweet’. Additionally, DJ Foefur, creator of a series of unofficial Prince ‘remasters’, created his 18-track version Dream Factory Remastered, which was widely circulated as a CD bootleg. In an attempt at recreating Prince’s original vision, this version contains tracks from Sign ‘o The Times known to be considered for Dream Factory, though ironically Prince may have substantially re-recorded parts of them to remove the contributions of Wendy & Lisa, with whom he had parted company on poor terms. 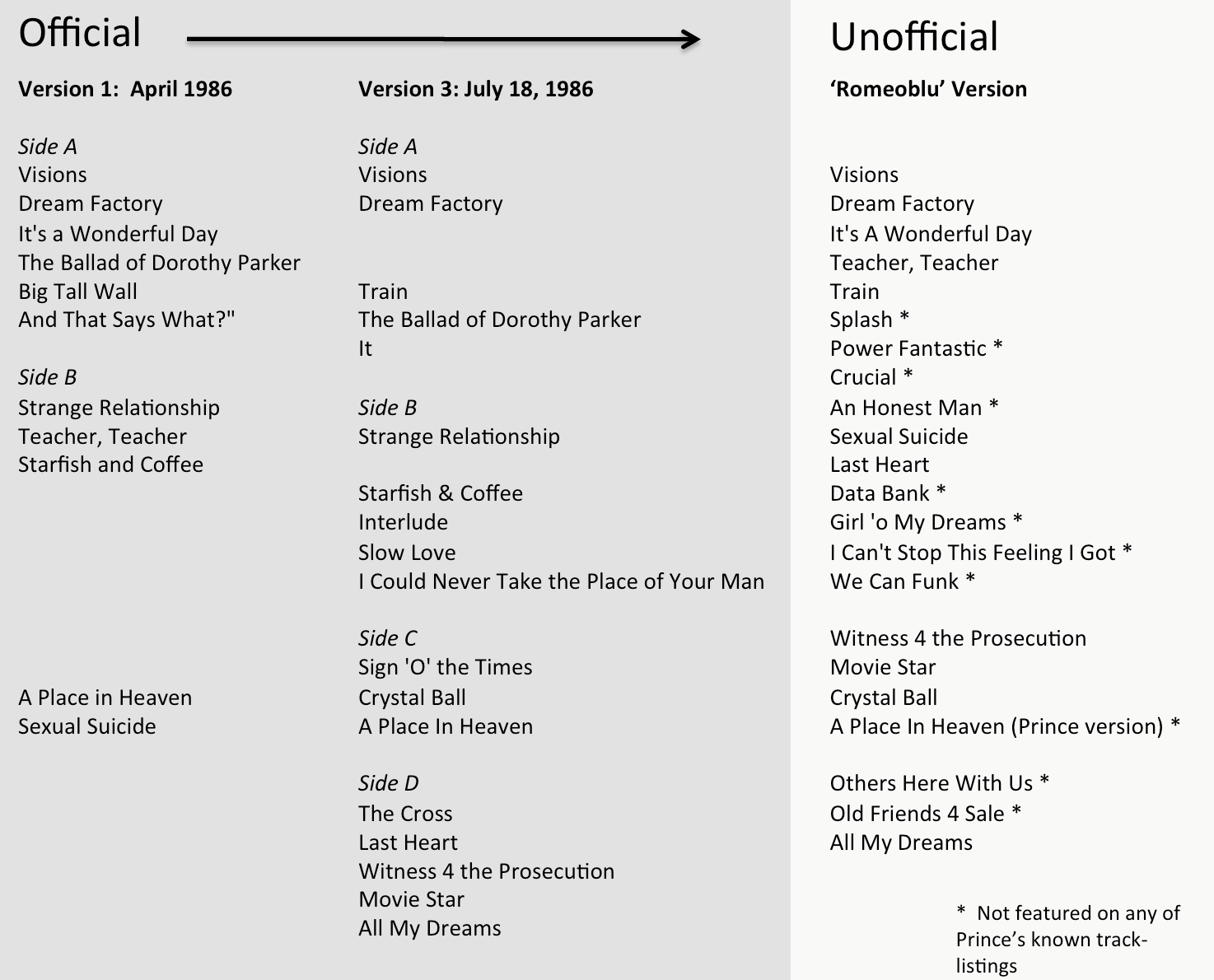 Figure 1: Comparison of two ‘official’ tracklistings of Dream Factory, taken from Per Nilsen (1999), with an unofficial ‘fan’ tracklisting by Prince.org user Romeoblu.

In short, Dream Factory, living up to its name, can be anything the listener wants it to be. It opens up a unique space for fans to craft an album reflecting their own personal passions; one that is both creative and discursive. After his death, this passion may intensify, as the unreleased album assumes an elegiac quality. Its cache of songs allows the compiler to be a purist, reproducing one or more of the original Prince track-listings; a completist, using as many tracks from the era as available; or a personalist, cherry picking favourite tracks to perfectly matches listening preferences.  Though fans may clamour for an official release, the wealth of possible material and flux created by the absence of it allows Dream Factory to operate within a liminal space between the official and the personal, where any version can have equal authority.[8]

[1] In 1999, Prince reinforced this notion by releasing an album of some of these recordings titled, The Vault: Old Friends 4 Sale.

[2] See Rebekah Farrugia and Nancy Gobatto’s analysis of Tori Amos’ Original Bootlegs series[2] on how artists can harness the presence of a large bootleg market, in this case of live recordings, to make money.  In doing so, they ‘blur the boundary between the value of the “authentic” and mass-produced music releases’, harnessing some of the subcultural capital of unofficial recordings circulated freely between fans (2010, p 357).  With Prince, there is an excess of this capital floating within his unreleased back-catalogue that, in life, he seemed quite uninterested in exploiting for his own financial gain.

[4] Wendy Melvoin and Lisa Coleman were key members of Prince’s band The Revolution from 1983-1986, before he sacked them.  They released several records as a duo during the 1980s and 1990s and had minor hits such as ‘Waterfall’ and ‘Satisfaction’ in the UK.  Their musical contributions to this era of Prince’s music are widely recognised, not least by Prince himself.

[6] Nilsen’s books are highly regarded by fans for their detailed and accurate chronicling of Prince’s work. For those who do not own the books can now easily access this information through the Internet.  There is even a Wikipedia entry for unreleased Prince projects based on his research (https://en.wikipedia.org/wiki/Unreleased_Prince_projects).

[8] This concept has been picked up on by the Kaiser Chiefs with The Future Is Medieval, marketed prominently as the first ‘bespoke’ album in 2011:  buyers purchased 12 tracks from a possible 20 and put them in their desired order to construct a unique creation.  This is, in effect, an attempt to exploit and legitimise the kind of practices already happening unofficially – and illegally – with album’s such as Prince’s, Dream Factory.

The Louisiana State Penitentiary and the Limits of Prison Rodeo Photojournalism
Live Human Exhibits: The World Columbian Exposition as a Space of Empire
Belle, Books, and Ballot: The Life and Writing of Nineteenth Century Reformer Lillie Devereux Blake ...

Alex Jeffery has recently completed a highly interdisciplinary PhD on Gorillaz' Plastic Beach, which interrogates both the narrativity of the project as well as the fecund range of creative responses to it from fans. His main research interests generally include music video, fan cultures and narrativity in popular music. He is also Associate Editor at the long running music review site Music OMH.
View all posts by Alex Jeffery →
Tagged  African American Culture, C20, C21, Cultural History, Gender and Sexuality, Popular Culture, Prince, Transatlantic.
Bookmark the permalink.