Book Review: Why the Right Went Wrong: Conservatism – From Goldwater to the Tea Party and Beyond by E.J. Dionne Jr. 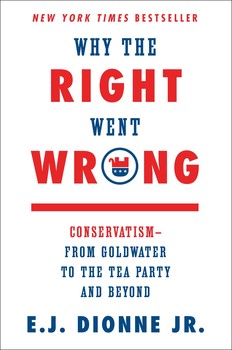 American conservatism is a powerful force in US politics. But has the path it has followed been the right one? E.J. Dionne makes the case that ‘today’s conservatism is the product of a long march that began with a wrong turn, when first American conservatives and then the Republican Party itself adopted Barry Goldwater’s worldview during and after the 1964 campaign’ (4). The path conservatism should have followed, according to Dionne, was the moderate conservatism of Dwight Eisenhower instead of the extreme conservatism espoused by Goldwater and now the Tea Party (4-5).

Dionne’s mostly chronological approach accentuates how Goldwaterism has been the anchor of conservative mantra, but also hinders what can be accomplished in terms of governing.

Within this framework, Dionne weaves a thoughtful narrative that probes conservatism’s constant struggle between forging a path of extreme ideological purity versus pursuing a pragmatic moderate conservative approach to governing. He highlights how all Republican presidents and key political actors post-1964 failed to live up to the expectations of the far right.

Even Ronald Reagan – the conservative president who led the GOP to the promised land – failed to live up to the unrealistic expectations of the extremists. But most important to Dionne was the perception of what Reagan achieved. ‘Our current political turmoil and the ongoing discontent on the right grows out of this essential fact: Reagan changed the terms of the American political debate without changing the underlying structure of American government’ (85). Dionne argues that this perception has plagued conservatism ever since.

Following Reagan, the political vision and leadership of Newt Gingrich helped to give Republicans control of Congress as a result of the 1994 midterm elections, their first congressional majority since January 1949. Gingrich rose to power on his uncompromising rhetoric and political tactics, but once there he forged a necessary practical approach to governing with Democratic President Bill Clinton. He abandoned the path of extremism, effectively setting up his own demise. As Dionne observes, ‘what is striking in retrospect – and important for understanding today’s right – is that many conservatives had soured on Gingrich precisely because he seemed so ready to work with Clinton after the failure of the shutdown strategy’ (153). The shutdown also highlighted the failure of far right’s ambitions, which were much more popular with the conservative right-wing than with the American public.

Despite being bestowed with four years of a republican controlled Congress, President George W. Bush also had to grapple with pursuing legislative accomplishments within the constraints of ideological purity. Bush sought to practice a conservative governing philosophy called compassionate conservatism that Dionne considers to have ‘never won traction among Republicans in Congress except when it could be used [as] a battering ram against liberals for their supposed hostility to faith-based groups. . . . Compassion was transformed into a rationalization for culture warfare – yet even this was not enough to excite the conservative base’ (229). Moreover, ‘George W. Bush did too little to change the party and the movement, but just enough to provoke a fierce reaction on the right’ (235). This reaction boiled over to become the Tea Party, an extreme right-wing outcry that intensified after Barack Obama won the presidency in 2008, giving Democrats both the presidency and control of Congress. With conservatives out of power the right-wing channelled all of its angst towards Democrats, uniting conservative congressional members and the grassroots against a common enemy.

As Dionne observes, Obama’s hope of transcending a liberal versus conservative America was not something conservative Republicans and the vocal Tea Party opposition were inspired to do, choosing instead to polarise themselves further. Their strategy was useful in Republicans winning control of the House of Representatives as a result of the 2010 midterm elections, after which it became more complicated (300). What began and is still taking place is the cannibalism of conservativism for the sake of ideological purity.

What Dionne’s analysis oversimplifies, however, is the link between Goldwater and the Tea Party. On social issues, Goldwater was at odds with religious conservatives. As moral values became more important to conservatism, his tenets no longer represented where the movement was heading.[1] For example, Goldwater and his wife supported Planned Parenthood – an award is even named after his wife Peggy.[2] If anything, the Tea Party is the “logical consequence” of past southern conservatives like Strom Thurmond and Jesse Helms.

Overall, Why the Right Went Wrong is a well-researched and provocative account of the history of American conservatism and the GOP since the 1964 Goldwater presidential campaign, a disaster for the Republican Party – but a rallying point for conservatism.

[1] For more on this point, consult: William A. Link, “Time is an Elusive Companion: Jesse Helms, Barry Goldwater, and the Dynamic of Modern Conservatism”, in Barry Goldwater and the Remaking of the American Political Landscape (Tucson: University of Arizona Press, 2013), ed. Elizabeth Tandy Shermer, 247-255.

Book Review: Pynchon’s California edited by Scott McClintock and John Miller
‘[S]omething to feel about’: Zora Neale Hurston’s Barracoon: The Story of The Last Slave
Book Review: Affect and American Literature in the Age of Neoliberalism by Rachel Greenwald Smith

Michael Espinoza is a PhD candidate at University College London, Institute of the Americas. His research focuses on Republican conservatism, rhetoric, and the socialist label with the framework of four-party politics. He holds a BSc in History (with a minor in Political Science) from Central Michigan University and an MSc in US Politics and Contemporary History from the University of London.
View all posts by Michael Espinoza →
Tagged  C20, conservatism, History, Politics, Presidents.
Bookmark the permalink.