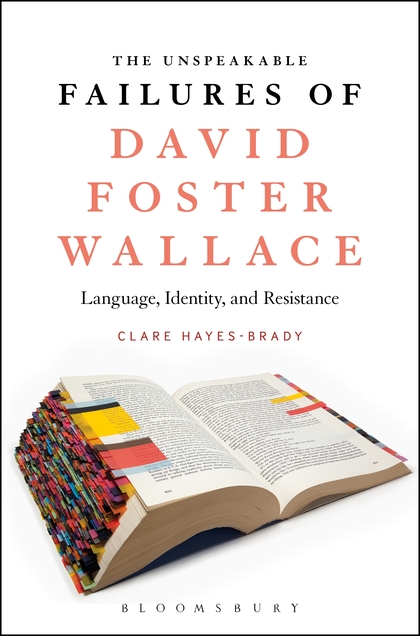 It has become difficult to think about David Foster Wallace without thinking about the intense dedication he inspires among his readers. His writing’s knotty brilliance is responsible both for his fanbase and for the field of Wallace Studies. More than perhaps any other late-twentieth-century writer, his work invites an academic response, not least because Wallace himself was fluent in the language and methodologies of academia. As the field of Wallace Studies matures, it has become a challenging task to outline a framework through which the entire subject of Wallace can be fruitfully viewed; yet, in this publication, Clare Hayes-Brady does just that.

In The Unspeakable Failures of David Foster Wallace, Hayes-Brady establishes a theoretical framework that can be used as a foundational approach for critical work on Wallace, proposing that failure and inexpressibility, in various forms, are the organizing principles of Wallace’s work. This framework elegantly accounts for previous trends in Wallace scholarship that have focused on Wallace’s preoccupations with connection, sincerity, solipsism, and his relation to postmodernism. The book unifies these themes under Wallace’s continual returning to the incomplete and his “resistance to singularity”.

The book encompasses Wallace’s entire body of work, drawing links between his fiction and nonfiction, and identifying themes that emerge in his earliest writing. Hayes-Brady describes how Wallace develops and repeats his thinking on themes such as solipsism, will, citizenship, and embodiment – as they relate to the unspeakable or inexpressible – describing how they emerge, recur and evolve right up until the final, unfinished novel, The Pale King (2011). Acknowledging and amending the lack of scholarship on Wallace’s first novel, plenty of time is spent with The Broom of the System (1987), emphasizing that here Wallace’s philosophies are clearest, if somewhat bluntly expounded.

Making everything Wallace published coherent is a challenge that inevitably leads to some texts being too briefly handled. For example, more attention is usually paid to what the nonfiction declares about the inexpressible than how it engages with the inexpressible. Here, however, it is given greater space than usual and is insightfully analyzed.

Two moves are fundamental to the book’s success, allowing Hayes-Brady to draw together a wide range of topics (many of which would not be intuitively associated with the unspeakable) under this unifying theoretical umbrella. The first is the division of failure in Wallace into three types: “abject,” (a complete failure to communicate); “structural,” (the failure of a communication process); and “generative” (the nature of communication as necessarily unfinished). This taxonomy ensures that the many examples and close readings provided throughout are always tied to a particular type of failure, preventing the thesis from becoming amorphous. The second move is a reframing of Wallace’s philosophical influences as “encounters” rather than “adherence,” allowing for Wallace’s tendency to take what he needed from philosophies and modify it to his own needs, rather than wholeheartedly committing to dogmas.

Hayes-Brady is most impressive in her explanation of the impact that philosophers such as Richard Rorty, Ludwig Wittgenstein, and Stanley Cavell have had on Wallace. The fourth chapter weaves together an extended close reading of Broom with an elucidation of the philosophy of Wittgenstein and Rorty, showing that Wallace’s perspective does not map neatly to one or the other, but carefully incorporates both philosophies to dwell on what cannot be said.

The book’s most vital chapter is its last, which takes the theoretical framework that has been constructed and applies it to Wallace’s treatment of gender. Pointing out that the feminine in Wallace is often found in absences at the center of texts, such as the elusive titular film in Infinite Jest (1996), or ‘Q.,’ the silent interviewer at the heart of Brief Interviews with Hideous Men (1999). In this sense, Wallace frequently describes women in terms of their effects on men. Here, Hayes-Brady adeptly criticizes Wallace for his moral failures on issues such as gender and race, his occasional dehumanizing of the “other,” and his apparent incapacity to write about successful love.

Despite this being a book about failure, it is also about hope. The book helpfully points to areas in which Wallace falls short – such as what Hayes-Brady reads as disingenuousness in the nonfiction, and his problematic representation of anything that is not a white American male – but it recognizes that, in Wallace’s writing, “It is in the failure of communication that the possibility of redemptive connection lives” (186). Hayes-Brady makes a bold claim in arguing for a central critical idea around which Wallace’s work can be organized, and the claim is well supported. The Unspeakable Failures of David Foster Wallace is a valuable addition to Wallace scholarship, most significantly in its creation of a foundational theoretical framework that traces Wallace’s fixation on communication as an ongoing process, eternally incomplete, always reaching for the unspeakable. For anyone interested in dwelling on what Wallace’s writing does, or negotiating the inexpressible in contemporary literature, this book offers an excellent way of thinking through what it means to fail.