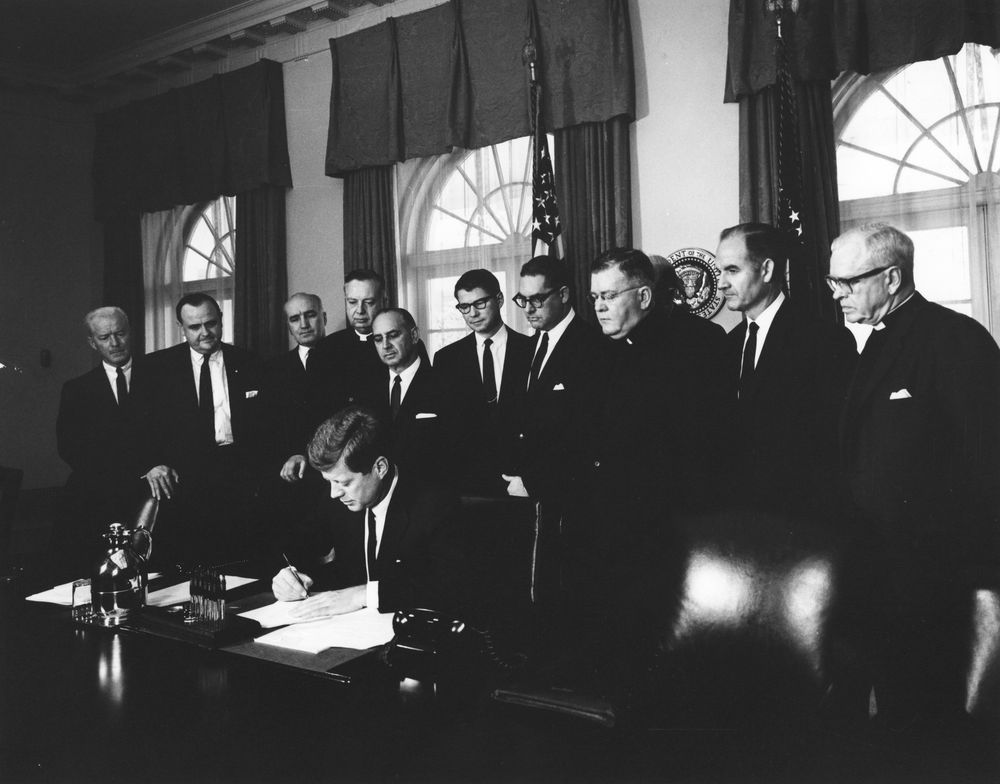 As I plotted my dissertation research strategy in the fall of 2012, a trip to Rutgers University quickly emerged as a top priority. New York City and Washington, D.C. had always been likely research destinations for my project on government and private sector cooperation in post-1939 U.S. foreign assistance, but I never foresaw traveling to Rutgers’ Special Collections and University Archives. By the time I filed my dissertation in May 2015, however, the materials I pored over in New Brunswick, New Jersey, formed an indispensable part of my research base.

My archival gold mine consisted of the records of the American Council of Voluntary Agencies for Foreign Service, Inc. (ACVAFS). Donated to Rutgers by a former ACVAFS executive, the unprocessed collection consists of 149 large boxes stuffed with minutes, reports, and memoranda detailing the Council’s inner workings. Federal officials and a cadre of private service organization leaders created ACVAFS in 1943, anticipating massive humanitarian needs in postwar Europe and recognizing the value of a central body to coordinate relief activities both among voluntary agencies and between private groups and the government. The Council filled this role until 1984, when it merged with another consortium and saw its duties assumed by the still-functioning American Council for Voluntary International Action (InterAction).

While ACVAFS emerged for the specific purpose of deepening state-private cooperation, actual overseas operations remained in the hands of individual members. Within a decade, as the postwar relief crisis eased and groups shifted their humanitarian focus to development-minded technical assistance, ACVAFS had become the primary venue for agencies to discuss partnership opportunities with the government and strike a consensus in dealings with U.S. policymakers. Furthermore, as the main locus of connectivity between major groups like Catholic Relief Services, Church World Service, the American Friends Service Committee, and CARE, Inc., the Council emerged as a space for member agencies to develop and exchange ideas. Consequently, ACVAFS’ records uniquely document the emergence of the agencies’ shared humanitarian philosophy and attendant justifications for meshing voluntarism and foreign aid. 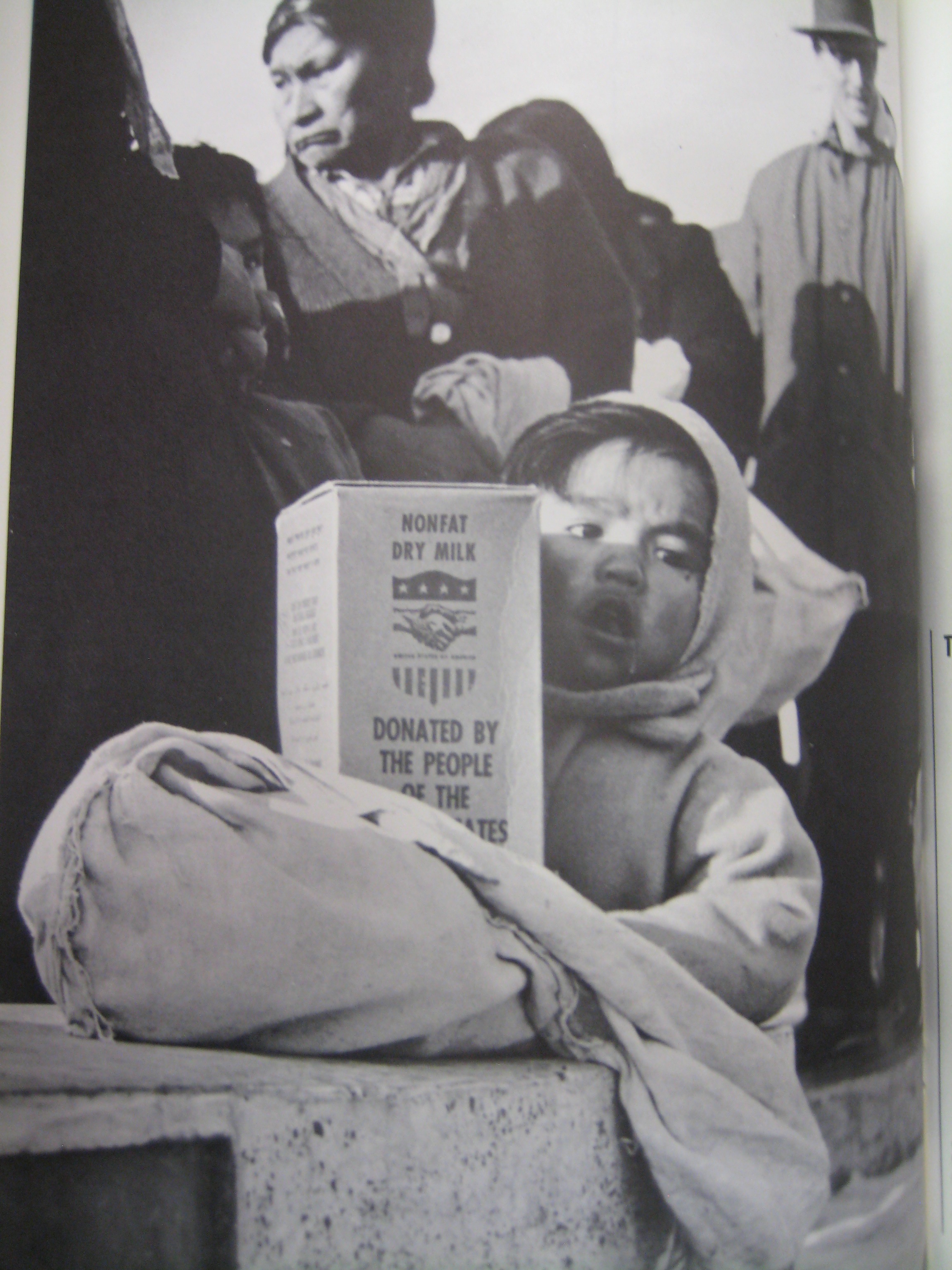 A child holds a box of food distributed under Food for Peace, bearing the label “Donated By the People of the United States of America”. Source: “Food for Peace: 1964 Annual Report on Public Law 480,” March 1965, Lyndon Baines Johnson Presidential Library, Office Files of the White House Aides, Files of Bill Moyers, Box 116.

Despite functioning as a hub for voluntary agency thought and action for nearly forty years, ACVAFS has drawn only passing interest from historians. Council records, however, reveal that ACVAFS played a substantial role in Cold War-era U.S. foreign relations. More specifically, Council documents detail why voluntary agencies advocated for greater state-private cooperation, as well as how the agencies articulated what they—and the federal officials with whom they worked—considered a distinctly American brand of humanitarianism. To put it another way, ACVAFS’ history demonstrates how a community of voluntary agencies helped drive the emergence of a policy framework and public discourse centered on heightening American citizens’ sense of obligation to foreigners in need and marshaling the benefits of “people-to-people” compassion for U.S. foreign policy.

ACVAFS also enjoyed success persuading the Truman, Eisenhower, Kennedy, and Johnson administrations to donate progressively larger amounts of government-owned agricultural commodities to Council members. Between 1949 and 1958, agencies distributed over 4.5 billion pounds of surplus foodstuffs in 67 countries, and by 1965 the iconic “Food for Peace” program had granted voluntary groups an additional 15 billion pounds for overseas feeding projects. Finally, from 1949 on, ACVAFS sought opportunities for Council members to participate in aid programs targeting Third World economic development and modernization. Most prominently, believing that private expertise could bolster the American crusade against mankind’s “ancient enemies” of hunger, disease, and poverty, Council leaders pushed for federal contracts that funded voluntary agency participation in initiatives ranging from Point Four technical assistance to the Alliance for Progress and Peace Corps. 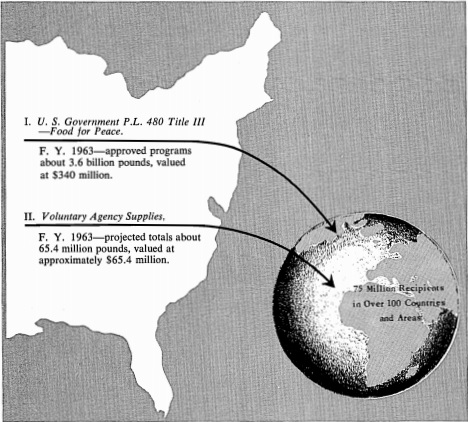 A graphic in a 1963 U.S. government pamphlet, “A.I.D. and U.S. Voluntary Agencies . . . the growing partnership,” illustrating how private agencies participating in the Food for Peace program formed a bridge between Americans and foreign citizens. Source: http://pdf.usaid.gov/pdf_docs/Pnads384.pdf.

Iterations of each of these “hybrid” arrangements—freight subsidies, access to surplus foods, and development contracts—still exist today. Within ACVAFS, a careful logic guided the agencies’ embrace of these opportunities and contribution toward embedding state-private cooperation in U.S. foreign policy. While Council agencies emerged from World War II confident in their ability to complement official U.S. aid efforts, the organizations still zealously guarded their independence from government control. Thus, throughout the 1950s, ACVAFS placed its greatest emphasis on what it called “voluntaryism”—how member agencies animated the free, disinterested generosity of American citizens for the benefit of foreigners in need. Far from precluding state-private cooperation, however, “the principle of voluntaryism” actually made such partnerships easier to justify. Nearly all of ACVAFS’ most influential members hailed from vibrant religious traditions, and the Council as a whole considered their work a natural outworking of Judeo-Christian “beliefs and emotions.” And since ACVAFS believed—as a 1953 pamphlet put it—that American foreign policy had developed out of the same “religious culture and democratic environment” that considered humanitarianism an integral part of America’s national identity, the Council could comfortably assert that U.S. policymakers’ “basic motives [were] really no different from those of voluntary agencies.”[i]

In the context of the Cold War, policymakers proved eager to enlist voluntary agencies (and their supporters) in initiatives that enhanced the United States’ image abroad and showcased the altruism nurtured by a democratic, capitalist society. Fully aware of the global struggle for hearts and minds, ACVAFS leaders also touted state-private humanitarianism’s value for U.S. foreign policy. At home and abroad, in addition to the power of voluntaryism and the overlap of government and voluntary agency objectives, ACVAFS especially strove to ensure that public rhetoric involving its members stressed the “people-to-people” nature of their work.[ii] By portraying Americans as deeply attuned to the needs of ordinary foreigners, and voluntary agencies as the collective embodiment of this concern, ACVAFS hoped to score a public diplomacy victory for the United States.

Toward this end, the Council ensured that speeches, pamphlets, fundraising materials, and even the labels affixed to surplus foodstuffs—declaring them a “Voluntary Gift of the American People”—highlighted U.S. citizens’ concern for their global neighbors.[iii] Beyond bolstering the aid programs which voluntary agencies considered the very best elements of American foreign policy, ACVAFS also anticipated making another long-term contribution to U.S. Cold War objectives through state-private cooperation. Most of all, the Council hoped to inspire a generation of new, indigenous voluntary agencies through which to foster the global spread of both voluntaryism and state-private cooperation. To the agencies, exporting the spirit of ACVAFS itself—rather than just the fruits of Council members’ labors—was perhaps “the greatest gift which the people of the United States [could] bring to the world.”[iv]

However, unfettered enthusiasm for state-private humanitarianism no longer permeates the American voluntary agency community. Some Council members had always harbored reservations about aligning too closely with U.S. foreign policy, but it took major crises during the late 1960s and early 1970s—particularly the Vietnam War—to shake previous assumptions within ACVAFS about the congruency of state and private objectives. This, too, underscores the importance of granting ACVAFS proper credit for its role in the history of U.S. foreign relations. Ultimately, the nationalistic tenor of early state-private cooperation puts American voluntary agencies’ post-Vietnam shift toward a more transnational, humanitarian discourse in perspective, and helps explain why some organizations today eschew hybrid arrangements altogether.

‘We cast these medals away as symbols of shame, dishonor, and inhumanity’: Veteran Protest and the R...
Review: ‘Collaboration in America and Collaborative Work in American Studies’
From Harlem to Texas: African American Art and the Murals of Aaron Douglas