Review: Labor: Studies in Working-Class History of the Americas: “Food and Work in the Americas” edited by Susan Levine and Steve Striffler 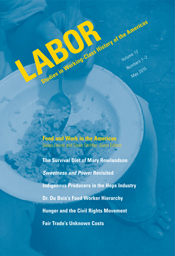 A worker with bare feet, rough hands and invisible face is eating fried rice and several red beans. While he keeps his lunch to the least nutritious and most basic one, he is perhaps producing hops, a flavouring and stability agent in beer, which is not essential in peoples’ diets. The cover highlights the central concerns of the special issue of Labor: Studies in Working-Class History of the Americas, “Food and Work in the Americas” (2015) edited by Susan Levine and Steve Striffler. Upton Sinclair’s The Jungle (1906) opens up the labor historians’ focus on workers’ lives in the food industry, yet they have little to say about what workers actually ate, how meals were prepared, or where the workers obtained their food. Such neglect is arguably dismantled by the close relationship between workers and food. After all, it is food that fundamentally ensures the very survival of laborers themselves and the success of the capital as well. The essays in Labor seek to provide its readers with sustainable analysis of the unbreakable linkage of food and labor in different periods and locations of the Americas, thus successfully unveiling food as the crucial but often hidden aspect of production work.

Under the strong domination of the capitalist class in the food system, production of food becomes a mode of resistance for the weak workers, especially in Native American communities. Although their subjects are divided in time, both Rachel Herrmann and William Bauer demonstrate how food production acted as a vehicle through which the subordinated community voiced their assistance even under the threats of violence and exploitation. In the case of Mary Rowlandson’s captivity narrative, her eating horse liver assisted her to accommodate to an unfamiliar culture. Such consumption and exchange of food functioned as a survival strategy to bridge the gap between Indians and colonists. The hop workers of the Pacific Slope used production of beer to open avenues for American people to reclaim aspects of their lives that westward expansion and federal Indian policy threatened to usurp.

African Americans also employ food to facilitate their class mobility and political activation. Venessa May’s essay re-examines the role of food workers in Du Bois’ The Philadelphia Negro (1899). Even though black cooks and caterers faced the challenges of low wages and few avenues for advancement, culinary expertise in black labor offered African American Philadelphians social mobility and economic power while also trying to structures of racial and class inequality. The social and economic benefits turn to a political one at the end of 1960s. Felicia Kornbluh narrates the efforts to stop African Americans from hunger through law and policy in the Deep South. By reminding us of the centrality of the workers’ access to food in the civil right movement, Kornbluh suggests the political economy of food and work directly connects the kitchen with wage work, the market and the election campaign.

Engaging with more contemporary and cross-disciplinary works, Labor attempts to present the diversified aspects of analysis. Sarah Besky and Sandy Brown challenges the necessity of conducting more researches on small famers by anthropologists because there are fewer small farmers in the food system. By reviewing the ethnographic, historical and geographical works on wage labor, their essay calls attention to the ways in which the special marginalization of labor, the dynamic forms of labor mobilisation and gendered and ethnic articulations shape farm life in the Americas. Their analysis also implies the importance of incorporation of ethnographies and culture more fully into discussion of workers’ communities. The style of Sarah Lyon’s narration of agricultural labor in the contemporary fair trade economy differs from the one of most historian essays in the collection. Lyon’s essay bespeaks labor historian’s concerns about the nature of wage work and role of unions in the fair trade politics.

The inherent linkage of food and labor raises significant questions about the pastoral and industrial imaginary, the relationship between agricultural and industrial food labors and the hidden nature of gendered and reproductive labor in the essay collection. To analyse the myth of food and labor surely is an ambitious but rewarding approach. While the essays lay a solid foundation for other scholars to rely on and move forward, the collection also calls for contributions with more diversified topics and methods. After all, the field of food studies nowadays do not limit itself anymore to the studies of those involved in the direct production of food; instead, we can expect more historical essays researching food processing, distribution and retailing in the twentieth century and more cross-disciplinary studies to explore the role of food in shaping the individual identity and communal relations. While the myth of food and labor continue to prosper, the workers’ table menu needs to claim position under the spotlight.

Jiachen Zhang is a final-year doctoral researcher at the School of English, the University of Leeds. His doctoral research investigates representation of food and abjection in Asian American literature published between 1989 and 2003. He has published an article on Amy Tan’s The Joy Luck Club in Offal: Rejected and Reclaimed Food (Oxford: Polity Press, 2017).
View all posts by Jiachen Zhang →
Tagged  20th century history, American Working Class, Black History, Geography, Native Americans.
Bookmark the permalink.