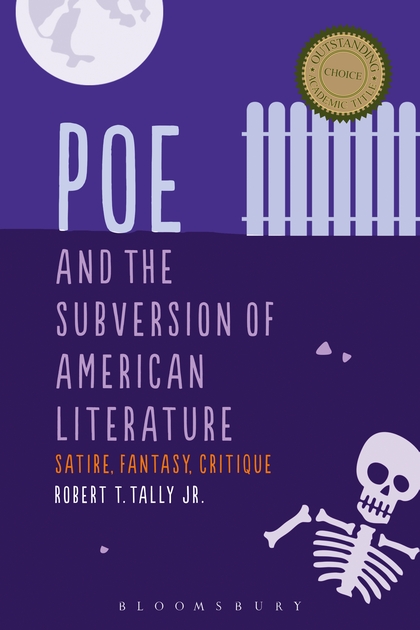 With numerous monographs and anthologies to his credit in just a few years, Robert T. Tally, Jr., rose quickly to literary criticism’s all-star team. This study stands out not only for its analysis of Poe, but also for its contribution to genre theory as well as its critique of American Studies.

As his title suggests, Tally’s argument is that with a satirical critique in a fantasy mode–through which Poe, like Dupin, is duping the reader–Poe subverts the nationalist narrative of America’s dominant culture. This national narrative influences “American literature” (the writers, editors, publishers, critics, etc.)  from the American Renaissance to the present. The difficulty critics have had with enlisting Poe into the dominant culture’s myths and ideologies is one measure of his critique. Deflating the old notion of Poe as Platonist, Tally enhances the recent argument that Poe was not above America’s material culture, but rather part of it. He knew what Whitman called “the blab of the pave.” Yet unlike Whitman, Poe didn’t subscribe to it; he critiqued it. Yet he did so not with explosive demolition but with subtle undermining–not by telling America’s story from the ground up, but by going underground to the bedrock. The treatment of Poe as satirical fantasist includes the psychoanalytical Poe, who undermined the national foundations by figuring the undermind. But to go underground was to go under–and to be ground under. Yet Poe wins in the end, because with postmodernism, the satirical has become as American as apple pie–or the Colt .45.

One of the most valuable parts of Tally’s book is its revision of genre definitions. For example, his definition of terror (a definition it would be good for others to adopt) is that terror, at least in Poe, consists not just of the unknown but the unknowable–inscrutability. Such foundational illegibility terrified transcendentalism’s romanticized Enlightenment empiricism. By contrast, horror would be all too readily understandable. As such, the implication of Tally’s understanding of terror relative to horror is analogous to Tzvetan Todorov’s theory of the fantastic relative to fantasy, according to which the fantastic compromises the reader’s ability to resolve the text into either natural or supernatural.

Similarly, Tally’s discussion of the grotesque goes beyond its usual definition (that the grotesque is partly realist and partly comical) and adds that the grotesque points to that which is wildly improbable. (As such, the grotesque is to probability what the fantastic is to possibility.) Tally thereby distinguishes the grotesque from the arabesque by giving the latter two meanings: the complex, and the weird. As such, it is easy to see how the grotesque enhances Poe’s satire. In addition, Tally shows that Poe was able to use Gothic as a means to inscrutability. Tally reminds us that Poe was among the first to write Gothic that did not answer the mysteries it posed.

Written in the context of the transnational turn, which grows out of the postnational turn, Tally’s study treats the construction of America’s cultural constitution (including its ostensibly national literature) as not so much wrongheaded as incomplete. It excludes too many people, themes, and genres. Moreover, the progenitors of American Studies (V. L. Parrington and F. O. Matthiessen, for example) implicitly affirmed the validity of such ostensibly national images as the city upon a hill, which for Poe was the city underwater (“The City in the Sea“).  But eventually the latter day myth and symbol scholars, writing as that paradigm broke down, implicitly allied with Poe in treating such images as chimerical–for example, Sacvan Bercovitch, who as a Jewish Canadian raised by anarchists (and named after Sacco and Vanzetti) was out of the American orbit around myths of exceptionalism. (And as Bernard Sternsher and David W. Noble showed, a similar situation obtained with the consensus school of American historiography, which originated as a critique of such historians as Charles and Mary Beard, but grew into the new left school.)

Quibbles? Yes: typos. Also, the font is microprint, which is a fate that has befallen so many academic publishers. At this rate, most academic publications will soon come with a magnifying glass.

But all of that is merely by the way. With this book, Tally becomes Poe Studies’ most valuable player.

I'm an Associate Professor of American Studies at Arizona State University West. I've published numerous articles on American literature, plus a monograph on Shirley Jackson. I'm finishing a monograph on James Purdy, and beginning a monograph on Paul Bowles
View all posts by Darryl Hattenhauer →
Tagged  Literature.
Bookmark the permalink.