Book Review: A War for the Soul of America: A History of the Culture Wars by Andrew Hartman 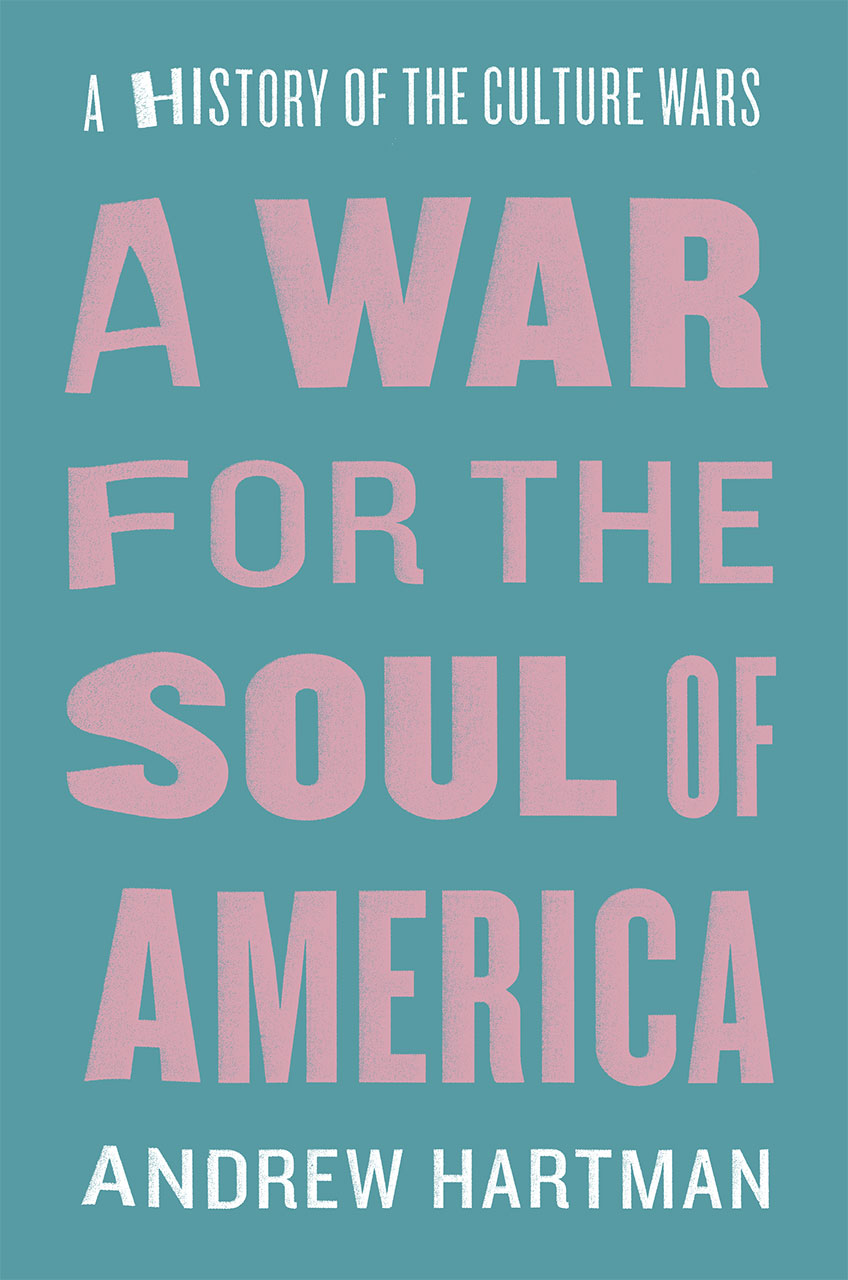 Are the culture wars truly a thing of the past? After decades of divisive arguments, has a consensus been reached over cultural and social norms in the United States? As Andrew Hartman notes in the introduction to his book, “the history of America, for better and worse, is largely a history of debates about the idea of America”. [2] Given this observation and the subsequent nine chapters of A War for the Soul of America: A History of the Culture Wars, Hartman’s ultimate conclusion that the culture wars are history – with little left but “lingering residues” – is somewhat surprising. [285]

Hartman’s book provides a well-researched historical overview of the bitter disputes surrounding subjects such as abortion, education, equal rights, and homosexuality which became central to American political discourse during the late 20th century, as well as offering an exploration of the intellectual basis for both sides of the argument. However, since many of the culture wars’ main battlegrounds remain openly divisive today, it is hard to agree with the author’s emphatic but incongruous conclusion that “The logic of the culture wars has been exhausted. The metaphor has run its course.” [285] Rather, judging from the current tenor of political discourse in America, it seems that issues such as secularization, equal rights, and abortion remain almost as controversial and divisive as they were two decades ago.

Hartman’s work is especially illuminating in the way it explores how opposition to the cultural changes of the 1960s among neoconservative intellectuals (including former liberals such as Irving Kristol) quickly became intertwined with the rising evangelical Christian Right during the 1970s. Conservative fears about increased social liberalisation and declining personal responsibility met Christian concerns over abortion, feminism, gay rights, and the secularization of America’s schools among numerous other issues. All of these came to coalesce under the umbrella of ‘family values’ politics. “Neoconservatives…might have innovated much of the logic that informed the conservative side of the culture wars,” Hartman observes, “But the Christian Right formed the demographic bedrock of the conservative culture wars.” [101] From their beginnings as disputes among largely secular conservative and liberal intellectuals regarding notions of American society and identity, the culture wars quickly evolved into a series of cultural and political battles in which Christian conservatives were determined to reassert religious and family values against what they regarded as an increasingly secular state led by dangerous liberals.Hartman traces the roots of the culture wars to the dramatic social upheaval of the mid-twentieth century. He begins by examining what he regards as the crucible of the culture wars: the way in which the ideals of post-war “normative America” (such as personal responsibility and hard work) were largely demolished during the 1960s by a younger generation desiring social liberation and radical change. [5] Crucial to shaping each side in the culture wars, Hartman writes, was the way in which Americans viewed the events of the 1960s and the cultural changes they subsequently brought about – “the Left considered post-sixties American culture a closer approximation of its ideal form, the Right considered it an abomination”. [6]

The women’s liberation movement exemplified the radical campaigns of the 1960s and early 1970s which overturned post-war American norms and sparked the culture wars.
http://mic.com/articles/115002/how-male-feminists-of-the-1970s-helped-women-take-a-stand-against-violence

Hartman’s book explains, moreover, that the story of the culture wars was not merely the story of pitched political, legal and intellectual battles over particular topics or events. It was also a story of the fearful, insecure reaction of many on the right in America to trends which marked and altered U.S. society from the late 1950s onwards. Fear, for example, on the part of the Christian Right that secularization was creeping through American education and popular culture. Fear among American men that the traditional patriarchal family was being undermined by feminism, changes in the economy, and equal rights. And, perhaps strongest of all, the simple fear among many Americans that society and culture were changing in ways and at a speed which they could not comprehend – “The further culture got from the 1950s, literally and figuratively, the more alarming were the cries of conservatives.” [173] 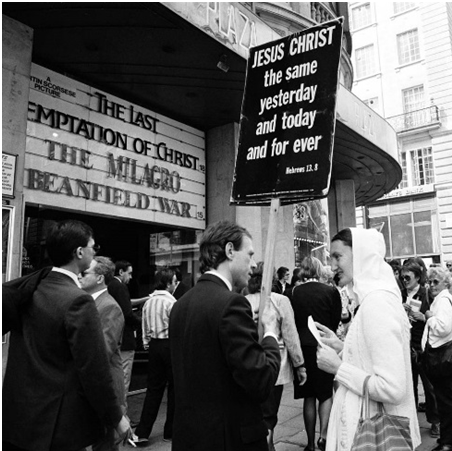 The Last Temptation of Christ (Scorsese, 1988) aroused angry protests from Christian conservatives who saw its portrayal of Jesus as blasphemous.
http://skepticism.org/timeline/august-history/8224-catholic-leaders-urge-american-catholics-not-see-scorsese-last-temptation-christ.html

Each of the main battlegrounds of these culture wars is examined in a thoughtful and detailed way by Andrew Hartman. Over nine chapters he relates countless stories of events, legal cases, cultural controversies and political arguments which relate to broader themes. Secularization and religion’s role in society, the changing American family, race, the rights of women, homosexuality, control of education and curriculums, and differing interpretations of U.S. history are all illustrated by relating contentious political disputes such as the fight over the Equal Rights Amendment, and cultural controversies such as that which surrounded Martin Scorsese’s film The Last Temptation of Christ (1988). Such an emotive series of subjects is clearly difficult to approach from a dispassionate standpoint. Despite occasionally seeming to lean towards the liberal side of the argument, Andrew Hartman largely maintains an objective stance, providing the reader with evidence and allowing them to make a judgment.

A War for the Soul of America is an excellent exploration of many aspects of the culture wars. It is particularly enlightening in the way it demonstrates that each of the major battlegrounds were highly resonant issues and not simply a series of politically-motivated quarrels, and how the fear and anger felt by the opponents of change was genuine and based on their own deeply held idea of what America had been and should be. Whether the culture wars are now simply a part of history, however, is certainly open to question. If, as Hartman writes, the culture wars were an “adjustment period” during which conservatives struggled to accept new social norms, then millions of Americans are yet to adjust. [285] Perhaps as time moves on and legislative changes on issues such as gay marriage become more widely accepted, a consensus regarding the idea of America will emerge. But for now it appears many Americans still feel the need to fight cultural battles and the debate continues to rage about what kind of nation the United States should be. If Andrew Hartman is correct in suggesting that the culture wars are now over, then it is at best a fragile peace.

Jonathan completed his MA in United States Studies at UCL’s Institute of the Americas and begins his PhD research at UCL in October 2015. He will be researching a political biography of former Republican Presidential candidate Senator Bob Dole, through which he will explore the development of the Republican Party during the last quarter of the 20th century. Although his main focus lies with modern U. S. political history, his other areas of interest range across all aspects of American culture, history and society in the post-war era.
View all posts by Jonathan Bartho →
Tagged  Black History, C20, Cultural History, Gender and Sexuality, Politics, Race, Religion.
Bookmark the permalink.