Fear Itself: Reflections on Native America and the Narrative of Fear

Throughout November 2015, U.S. Studies Online will be publishing a series of posts to mark Native American Heritage Month. In this post Darren Reid (University of Coventry) uses his own research on Native American guerilla warfare to reflect on narratives of fear throughout history and in a post-9/11 world.

When conducting research into the colonial era it can be easy to work in an imaginative, intellectual space that is completely isolated from the modern world.  Of course the sound of the kettle boiling (and the anticipation of caffeine – the fuel of the academe) helps to keep a part of me rooted in the present but, as I think about my various sources and documents, trying to imagine peoples and spaces as they once were, my mind is largely dedicated to the past.  As I write this, however, the tragic events in Paris are continuing to unfold.  On my professional Facebook page my students are making, and decrying, Islamophobic remarks amid the rush of self-righteousness, fear, and empathy which so predictably lights up social media networks in the wake of such attacks.  As I sit, contemplating the psychological impact of Native American guerrilla warfare, I am, however, reminded that I am imagining a space that is as much shaped by the world in which I live as it is by the primary sources which surround me.

I write about Native America in a post 9/11 world, and I write from a post-War on Terror perspective.  My understanding of violence, of the power of the imagination to conjure images and memories not my own, is rooted far more in my experiences of the world in the past fifteen years than the half-remembered childhood memories I possess of the Cold War.  Quite naturally, I should therefore expect to be a product of the world in which I spent my entire adulthood.  I should expect to view the past through a lens shaped by my subjective experiences of modern society and, so the logic goes, I should expect my imagined vision of the past to be biased and warped as a result.  In short, my experience of the West’s response to 9/11 will necessarily create post-9/11 histories and that is dangerous – but it is also useful.  As I read about the victims of the Paris attacks, I find myself thinking about Mrs. Mitchell, an early settler of frontier Kentucky who, after learning of her husband’s death at the hands of an Indian raiding party, was seen ‘lamenting and wringing her hands.’[1]  Mitchell’s story leads me, in turn, to think about an unnamed Indian who, despite being engaged in battle, ‘dropped his gun’ and pulled the bodies of his two sons from the river in which they had fallen before sitting down between them to await his own death.[2]  The emotional landscapes of the twenty-first and eighteenth centuries seem to reflect each another – furious grief and deep familial affection can be observed in both.  For historians, that apparent parallel is dangerous, to be sure, but it is also instructive.  History is not, after all, always about change over time.  Consistency is important too. 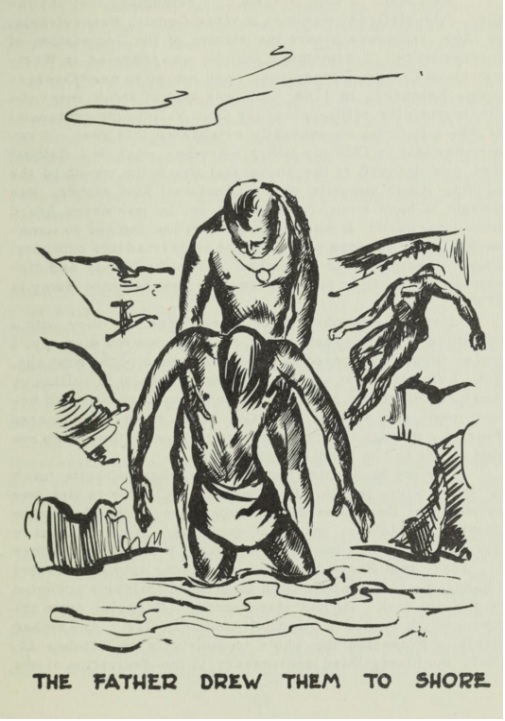 This image of an Indian father dragging the bodies of his two sons out of the river appeared in a 1954 account of Josiah Harmar’s campaign, alongside a reprint of David H. Morris’s account of the battle. See General Harmar’s Campaign (Fort Wayne: Library of Fort Wayne and Allen County, 1954), p. 9

The parallels that form in my mind are instinctive – and so too is my response to them.  I am defensive, conscious that I should be deeply wary of conflating Mrs. Mitchell’s apparent experience of grief with those which have been so vividly on show over the course of the past week.  Still, there is something about the transcendent experience of grief which feels important.  Aside from the apparent emotional parallel, there is a parallel of circumstance also – Mitchell lost her husband to an attacking force which was necessarily elusive and semi-anonymous.  She understood that her husband had died at the hands of an Indian raiding party but beyond that she had no specific information upon which to draw – only the ideas and stories which were circulating among her community, a popular canon which fused and confused lived experience with imagined horrors.  The Indians deliberately stoked the white community’s imagination, using psychological warfare to unnerve their enemies.  In one raid, they ‘made the most Dreadfullest screams and howling that could be imagind [sic]’, a sonic assault so affective that witnesses ran in terror spreading stories of an imagined massacre.  In another, the Indians rounded up cattle belonging to the inhabitants of the township they were besieging.  One by one, the township’s cows were sent before ‘with arrows in them’.[3]  The defenders rarely saw their attackers, but they had just enough information to imagine the worst.  Bodies imagined, then as now, are as affective as those seen first-hand.

The Indians’ use of psychological violence seems to predict modern day terrorism – both, after all, weaponise fear and both are designed to produce negative emotions and reactions.  But with such observations come weighty questions about ethics and interpretation.  As much as psychological violence was deployed by the Indians, so too did white Americans, in their own way, utilise the power of terror and intimidation in their wars against the tribes.  In other words, to see a parallel between Native American wartime practices and those of modern terrorists might well be instructive; but it is also indicative of an inbuilt western bias.  Still, exploring those parallels is important because it is that exploration which allows us to understand the limits of those comparisons.  It is my idiosyncratic and subjective of experience of a post-9/11 world that brings the importance of psychological violence to the forefront of my mind when I reflect upon conflict in the backcountry.  This is, I believe, a good thing; emotion is easily overlooked as an agent of change but I must remain on my guard, wary that whilst my lived experience can positively inform my inquiries into the past (or at least offer new avenues for reflective thought), it cannot be allowed to shape it. 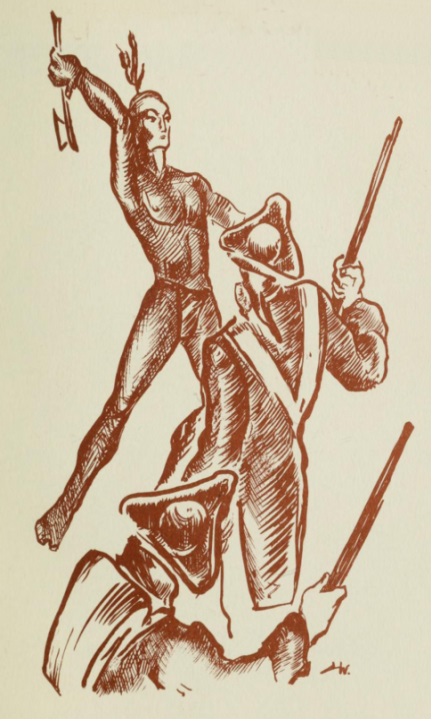 This crude image from the 1950s speaks of the power of fear (in this case fear of the Indians) in the American imagination. By the mid-twentieth century the Indians were no longer a physical threat; but the legacy of imagined violence remained firmly in place. Image taken from General Harmar’s Campaign (Fort Wayne: Library of Fort Wayne and Allen County, 1954)

The apparently indiscriminate nature of ISIS is not comparable to the measured, if contemporaneously unnerving, tactics employed by the avengers of the Gnadenhutten Massacre, for example.  The Delaware, Wyandots, and their allies tortured and killed Colonel William Crawford as a response to the indiscriminate killing of dozens of pacifist Moravian-Christian-Indian converts.  Rather than an unrestrained act of revenge, however, the death of Crawford (and many of those captured with him) served to balance the proverbial books, it served to atone, one atrocity for another.  But whatever reasonable level of balance existed within that framework of violence, the perception created by that event, which was repeated in lurid detail in John Knight’s famous narrative of his captivity, was one of unreasonable brutality, of uncontrolled and unfettered aggression.  The subtly and nuance of the Indians’ response to Gnadenhutten was lost amid deliberate manipulations of fear.  It was, of course, the media (in this case, publisher and proud Indian hater, Hugh Henry Brackenridge) who helped to shape Crawford’s death for that purpose, just as the modern media wields huge amounts of influence over the ways that  conflicts are understood and internalised by audiences today.[4]  The role played by the media is necessarily different in the twenty first century, but lessons learned whilst critically consuming the news today can nonetheless provide the basis for a skeletal framework which can inspire historians to ask interesting questions.

Once on this conceptual road, allowing the unfolding events of a post-9/11 world to consciously shape how one thinks about (or inquires about) the past, it is difficult not to perceive further similarities, even as parallels are contextualised, qualified, and, where necessary, disqualified.  Most historians correctly recognise the inherent problem of projecting modern ideas backwards – but the practice is not necessarily antithetical to good history.  The lived experience of the historian necessarily broadens their conceptual horizons, allowing them to imagine interpretations that might otherwise have been beyond them.  I cannot say with certainty how my view of terrorism or psychological warfare would have differed had I not lived through the aftermath of 9/11 – but I suspect it would be very different and, as a result, the intellectual toolkit available to me would have differed substantially.  There is something about the way in which friends, family members, and students react on social media to events like those in Paris which helps me to understand, in some small degree, the processes being dealt with by historic actors exposed to physical and psychological violence which was closely associated with a particular ethnic or cultural group.  Despite being a barrier to objectivity, my lived experience forces me to ask questions and to view past events in a way which, biased as it may be, forces me to think in ways which might have been beyond me.

[4] Hugh Henry Brackenrige (ed.) Indian Atrocities: Narratives of the Perils and Sufferings of Dr. Knight and John Slover, Among the Indians, During the Revolutionary War, with Short Memoirs of Colonel Crawford and John Slover (Cincinnati: U. P. James, 1867)

The Toppling of Þorfinnur: Vandalism as Dialogue and Direct Action
Trump and the Republican Party—Precessors and Limits
Latinos and the Language Question: Arizona, 1967-70

Darren Reid's core research has been concerned with the role played by violence in the shaping of early American society and its role in the creation of Native American ‘Otherness’. Darren is currently in the process of turning his PhD thesis into a monograph for publication. His secondary research concerns the evolution of American popular culture and he has recently co-directed 'Looking for Charlie', a documentary about Charlie Chaplin, Buster Keaton & the suicidal clowns who inspired them.
View all posts by Darren Reid →
Tagged  C18, C19, C20, C21, Fear, History, Native Americans, Terror.
Bookmark the permalink.