Throughout November 2015, U.S. Studies Online will be publishing a series of posts to mark Native American Heritage Month. In the this post, which is based on her British Eccles Centre Summer Scholars talk, Christine Bold (University of Guelph) discusses the experience and performances of Indigenous, and non-Indigenous, “Vaudeville Indians” on the variety circuit across Britain in the late nineteenth- and early twentieth-century.

If you eat in Wan Chai Corner Chinese Restaurant on Gerrard Street in London, you’re sitting next door to the former office of a Cherokee Princess psychic. Princess Wahletka sailed from Manhattan in 1921 to join the Moss’ Empire variety circuit, going on stage in buckskin and headband, sometimes blindfolded, to read audiences’ minds and tell their futures—with considerable success, from Finsbury Park to Newcastle, Cardiff to Edinburgh. In 1926, from Princess Wahletka’s Office, Two Gerrard Place, she also published a strategically revised edition of the book which had appeared two years earlier in the U.S.: Lifting the Veil: How You Yourself May Acquire Mystic Power and Develop Mind, Body and Spirit.

Wahletka was one of the “vaudeville Indians” who travelled global entertainment circuits from the 1880s to the 1930s. Some were Indigenous, some only pretended to be, and some seem impossible to pin down. All were part of what Dakota historian Philip Deloria has famously discussed as the “secret history” of Native peoples making popular culture.[1] While the vaudeville Indian community has largely gone under the scholarly radar, it lives still in the memories and performances of contemporary Indigenous theatre artists—such as Spiderwoman Theater, who were born into a Guna and Rappahannock family of “show Indians” in Brooklyn in the early decades of the 20th century, and the former members of Turtle Gals Performance Ensemble, of Toronto, who are related to Spiderwoman by family and performance technique. I owe a debt to these artists, particularly to Monique Mojica (Guna and Rappahannock) and Michelle St. John (Wampanoag) who are research consultants on my contribution to the recovery of this community. (Funding by the Social Sciences and Humanities Research Council of Canada is also a crucial component.)

The long history of Indigenous visitors to Britain (some more voluntary than others) stretches from the beginning of the sixteenth century and includes many kinds of entertainers—dancers accompanying George Catlin’s paintings, performers in Buffalo Bill’s Wild West, members of the Earl’s Court “Indian Village,” and so on.[2] The particular significance of vaudeville-variety-Varieté lies in its intense modernity as the first transnational system of mass entertainment, its close relationship with audience, and, despite the rigours of the touring circuit, the degrees of creative and contractual control available to performers. “Playing Indian” [3] in vaudeville-variety put Indigenous performers—those “vanishing Americans” supposedly left behind by modernity—at the heart of modern popular-culture making.

Take, for example, Seneca performer Go-won-go Mohawk. At some point in the 1880s, Go-won-go Mohawk seems to have broken the constraints of US wild west employment to build her own theatre troupe, including her non-Native husband Charles W. Charles. She wrote melodramas for her company to perform, creating for herself a fascinating gender-bending—perhaps Two-Spirited—identity on- and off-stage. (Her best-known play, Wep-Ton-No-Mah, The Indian Mail Carrier, currently available only in the British Library, decisively rang the changes on wild-west images of howling Sioux warriors.) She was successful enough to inspire a—long-forgotten—dime mini-series, written by Buffalo Bill’s major author, Prentiss Ingraham, published by Beadle and Adams. However, she couldn’t get off the treadmill of cheap theatres and grinding schedules—shuttling between the Bowery, Harlem, and Brooklyn East District seven days a week. 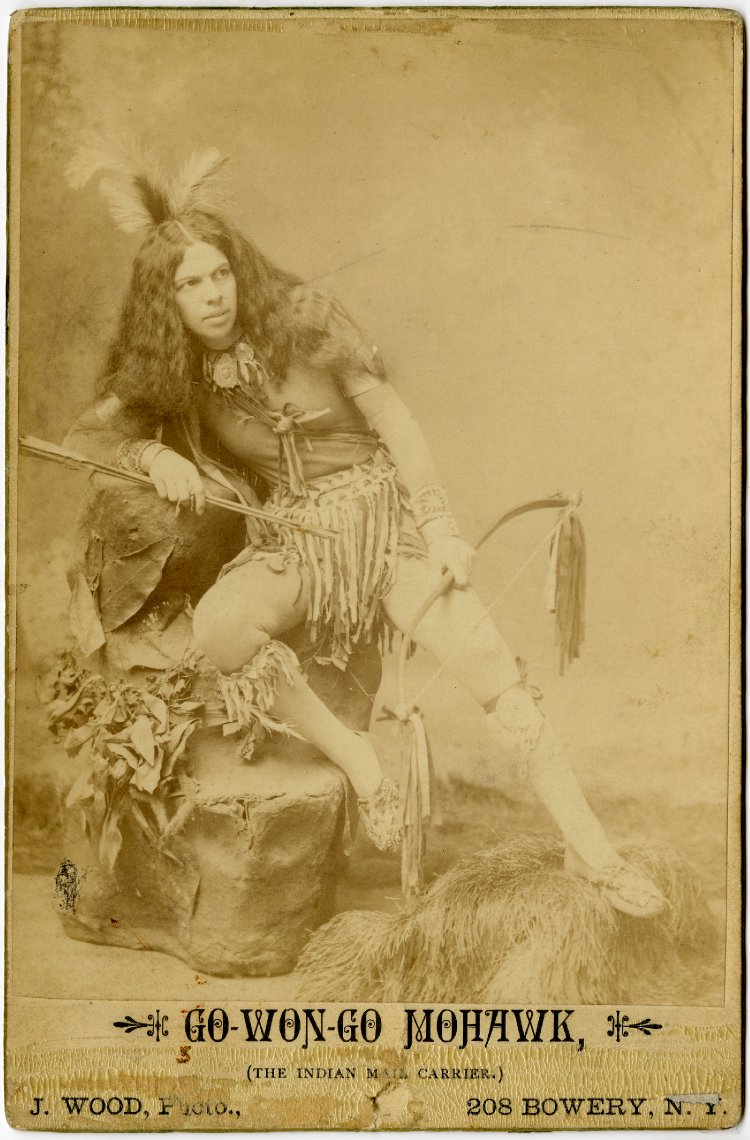 Taking her troupe to Britain made her career. When she stepped off a Cunard liner and onto the stage of Liverpool’s Shakespeare theatre—actually she rode on, bareback—she found the celebrity and improved work conditions which had eluded her in the US. From her first interview, she refashioned her identity and performance in response to British audience expectations. She insisted on her difference from “Bill’s Indians,” a process which was boosted when the popular British publishers Aldine reprinted the Beadle and Adams dime novels. She emphasized her agency as “actress-authoress.” And she developed the variety act embedded in her melodrama into a cross-race, cross-empire virtuoso display, cleverly straddling multiple audiences and houses at a time of fierce debates about variety undercutting theatre. Throughout two successful tours—1893-1897 and 1903-1906—she was an enduring favourite, solidly entrenched in the provincial circuit, sustaining a high level of interaction with British working- and middle-class audiences. Her overseas celebrity enabled her to return to the US with considerably more clout in the entertainment economy.[4]

The cultural space which Go-won-go Mohawk enabled—a queer Indigenous transatlantic space of performance—was soon occupied by many more entertainers. Headliners on British variety stages included the Deer family, Mohawks from the Akwesasne and Kahnawake reserves across the US-Canada border; “Cherokee Kid” Will Rogers; Cora Youngblood Corson, the Cherokee tuba player and her all-girl band; Yakima dancer Os-ko-mon; and Mapuche opera singer Chief Caupolican. Vaudeville-variety operated as a crossroads where Indigenous performers  reworked their images and enlarged their strategies for survivance (to use Anishinaabe scholar Gerald Vizenor’s term)—in a period, we must remember, that moved from the near-genocide of the late 19th century to the emerging cultural survival of the 20th. 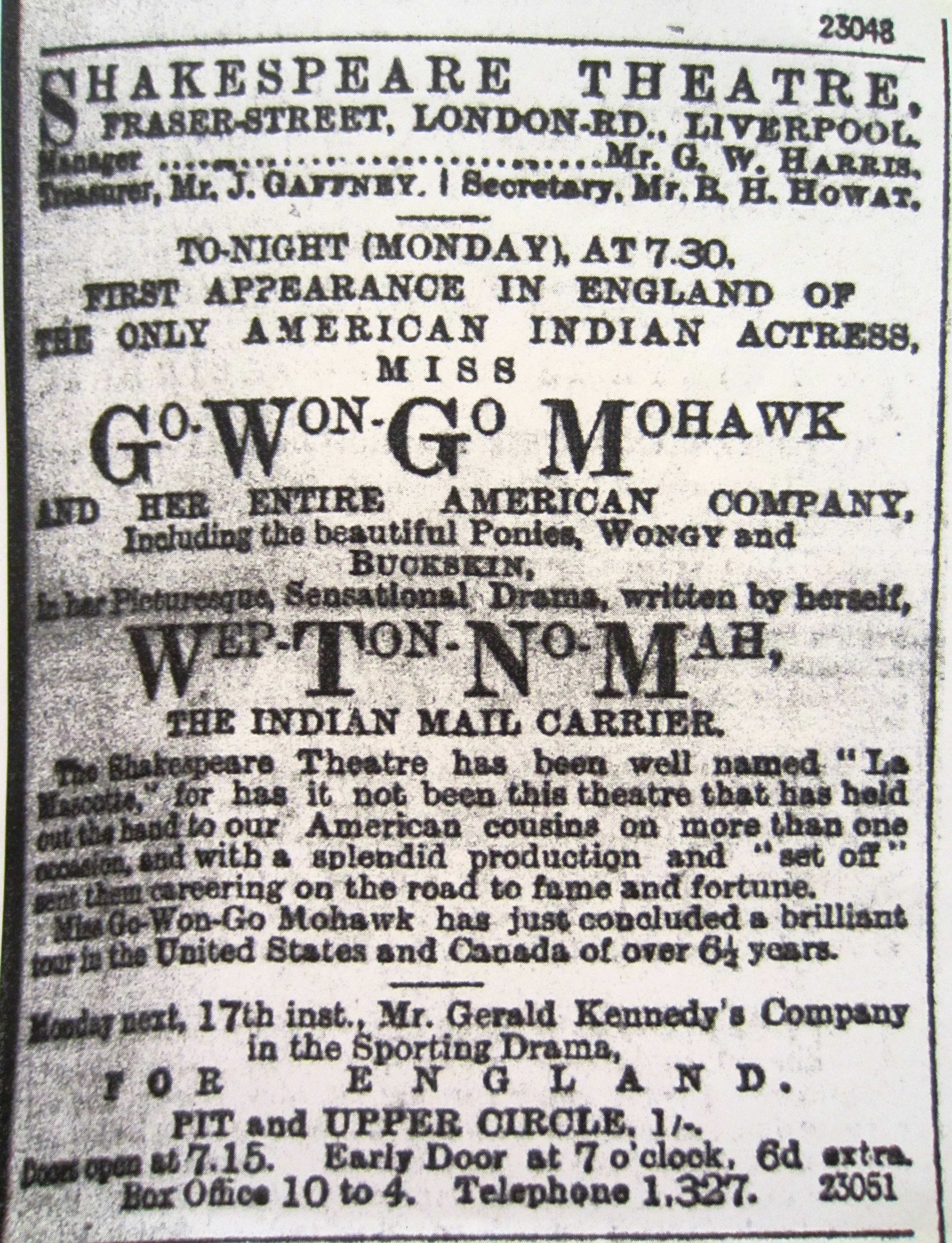 To thank the Eccles Centre for the opportunities afforded by this fellowship is to do more than express tremendous gratitude—it’s to make a methodological point. Following these performers from the US onto the British stage delivers a whole new visibility, in several senses. Figures who were difficult to recover, deeply buried in North American archives, virtually “leap off the page” in the British Library, as I said in my Summer Scholars talk—from newspapers, theatre trade papers, popular publishing, the Lord Chamberlain’s Plays and Day-Books, playbills and programs. Their agency also becomes more visible. These materials not only document British responses to Indigenous entertainers; they offer the possibility of recovering Indigenous perspectives. Piecing together the record of how these performers variously took on the transnational challenge—reading their British audiences and adjusting their performances and self-presentation accordingly—takes us closer to the operation that Seneca scholar Michelle Raheja names “visual sovereignty.”[5] It may also be that, on this side of the Atlantic, such performers became more visible to each other. A symbiosis becomes legible, as Indigenous and non-Indigenous vaudevillians “playing Indian” marked and were marked by British communities.

Which returns us to Princess Wahletka’s office. My encounter with it was serendipitous. At the end of another day’s reeling from the archival cornucopia in the BL, a friend took me to eat in one of his favorite haunts, I glanced at the number on the next door—and “ambushed by vaudeville Indians,” I thought; “My friend must be psychic.” Princess Wahletka seems a truly slippery character.[6] Already doubtful about her claim to Indigeneity, I began to see more clearly in the British archive the doubtfulness of her claim to female gender. Glimmerings of an intriguing figure emerge. Embedded in bohemian Soho, just off the theatrical epicentre of Shaftesbury Avenue, a very smart, queer young man—possibly Indigenous, possibly not—exploited the lure of primitivism among transatlantic, cross-gender, cross-class audiences. S/he provides one way into the “Indian” presence in vaudeville-variety, the Indigeneity hiding in plain sight at the heart of modernity and empire, and the visual sovereignty—Raheja’s “space between resistance and compliance”—forged within transnational mass entertainment.

[3] To use the phrase coined by Cherokee scholar Rayna Green and by Deloria.

[4] Some published material on Go-won-go Mohawk is available in Roger Hall, Performing the American Frontier, 1870–1906 (2001), and Matthew Rebhorn, Pioneer Performances: Staging the Frontier (2012); my own work on her in the US context is forthcoming in European Views of the United States: 2014 European Association of American Studies Conference Volume, ed. M. E. Messmer, and The Palgrave Handbook of Popular Fiction, ed. Ken Gelder

[6] To use Laura Browder’s terminology.

“A Northern city with Southern characteristics”: Ferguson and the History of Race Relations in the S...
Conference Review: APG/BAAS Annual US Politics Colloquium
The Dragon’s Back: China, US Foreign Policy and the 2020 Election

Christine Bold has authored and edited six books--two of them multiple-award winners--as well as numerous articles, chapters, and editorial projects. She has three main areas of interest. Her longest-standing focus is on U.S. popular print culture of the late-nineteenth and early-twentieth centuries. Her most recent book in this field is The Frontier Club: Popular Westerns and Cultural Power, 1880-1924 ( Oxford U.P., 2013)--winner of the 2014 Thomas J. Lyon Book Award in Western American Literary and Cultural Studies (sponsored by the Western Literature Association); winner of the 2014 Robert K. Martin Prize for Best Book (sponsored by the Canadian Association for American Studies); and a CHOICE "Outstanding Academic Title" of 2013. Additional publications in this area include: ed., U.S. Popular Print Culture, 1860-1920 (Oxford U.P., 2011, as part of their multi-volume series, The Oxford History of Popular Print Culture); Selling the Wild West: Popular Western Fiction, 1860 to 1960 (Indiana U.P., 1987); and a number of introductions, chapters, and articles. Recently, this interest has developed into a project on popular performance; currently, she holds a SSHRC Insight Development Grant to work on "Vaudeville Indians."
View all posts by Christine Bold →
Tagged  Britain, C19, C20, History, Native Americans, Theatre, Transatlantic, Vaudeville.
Bookmark the permalink.