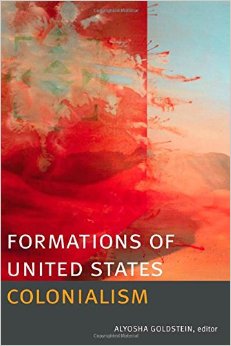 Alyosha Goldstein sets out his plans for edited collection, Formations of United Colonialism, succinctly and elegantly in his introduction. This collection’s ‘unique selling point’ is that it places the overseas empire and the settler colonialism of the United States in the same analytical frame. Influenced by the groundbreaking work of Amy Kaplan and Donald E. Pease, Goldstein continues their work in attempting to highlight the error of U.S. imperial denial.[i] By comparing within the American colonial experiment, this book is able to stress the nuances and complexities of U.S. colonialism, and thereby underscore the reality that ‘colonialism persists as a never fully repressed or entirely manifest structure’ even today [3].

At the heart of this volume is a desire to understand American society today, and where the past might lead U.S. society and foreign policy in the future. Goldstein has provided structure to a collection that is wide-ranging and varied, in terms of chronology, geography, and subject matter, through the use of three thematic ‘points of entry’. Within these sections, the ways in which the past is disputed and used by different ethnic and political groups are explored; the terms and narratives used in relation to the ‘colonial encounter’ are problematised; and the meetings of different narratives and languages are examined.

This volume can be read whole or as single entity chapters. Flitting from 1818 and the Choctaw Indians’ territory in Mississippi (Barbara Krauthamer) to the current endeavours in Iraq (Vicente L. Rafael), via 1930s Guam (Augusto Espiritu), this book takes in as many aspects of U.S. colonialism as possible. There is a danger that with so much breadth of time and geography, the chapters would be shallow or disjointed. Balancing detailed studies with an acknowledgement that the reader will not be an expert on everything, if anything, can lead to some quite dense chapter introductions. However, in practically every case, these (necessary) introductions lay the foundations for the fascinating and varied case illustrations that follow. 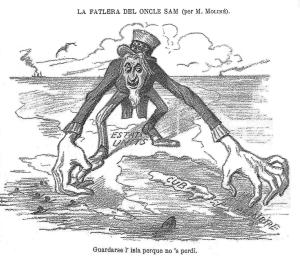 While the variety of subject matter can be a little intimidating, there are a few key themes that link the whole book (outside of colonialism). One of these is translation: of language, of space, of knowledge, and of legal frameworks. This is a theme that appears in all of the chapters, and in different ways. Joanne Barker focuses on the Delaware Tribe’s creation story, its interaction with ideas of modernity, and how these ideas and understandings have been ‘translated’ by and for a Western audience. Manu Vimalassery uses the example of Chinese workers and Native American Paiutes interactions in nineteenth-century Nevada Territory to convincingly purport the benefits of rumour as a source for colonial historians. The ‘translation’ of oral traditions into written form is raised in this chapter, and many others. It is argued that historians should re-focus their attention from what is actually written in front of them, onto the social reproduction of meaning, and the social effects of those processes. 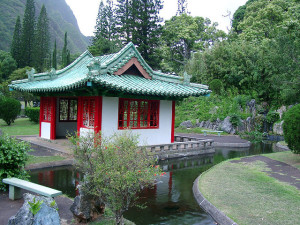 The other central theme is the recording of space. The investigations into the ways that the United States government and community leaders have interacted with past colonialism, and the violence that often accompanied it, is one of the many strengths of this book. It is easy to acknowledge the efforts to celebrate the multiculturalism of U.S. society through heritage and culture. However, as Dean Itsuji Saranillio’s chapter on the Kēpaniwai Heritage Gardens shows, this celebration of multiculturalism is still a manipulated and exclusive image, which often ignores the Indigenous heritage of ‘American’ areas.

The ability of cartographers to remove the process of settlement from their maps, and instead, construct a new national history ‘through the creation of “facts on the ground”’ is examined in a number of chapters [58]. How these ideas were determined and cemented influenced the memories and traditions of both settler and displaced peoples.  Colonialism was not always a process of violence, however, as this book makes clear, the U.S. government followed a system of ‘horses for courses’. While violence played a role in much of U.S. colonialism, both internal and external, this volume also takes into account the ‘hearts and minds’ concept that is now so central to the media’s representation of American foreign policy. 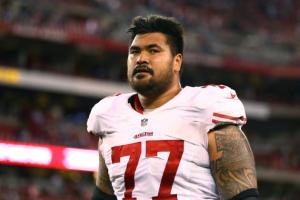 Mike Iupati – born in American Samoa and raised in California, Iupati plays for the Arizona Cardinals. Uperesa points out how traditional tattoos have helped add to the exoticism of American Samoan Football players.

There are many excellent chapters in this book, however my favourite is one that shows the complexities of colonialism now, and has ‘hearts and minds’ at its foundation. In chapter eight, Fa‘anofo Lisaclaire Uperesa explores the colonial political economies involved in American Football and the place of American Samoans within the game. The appreciation of the Samoan physique and mentality in football has led to new networks of migration between the U.S. and American Samoa, as well as an anchoring of the game in Samoan education. Uperesa uses these networks to examine how U.S. dominion over the islands has transformed all aspects of Samoan life over the past century [207].

However you read this book, by dipping in to chapters or by reading the whole thing, you will emerge with a deeper understanding of the different facets of the United States’ interactions with indigenous peoples within the United States and outside its national borders.  There are no overarching conclusions presented to the reader, instead, Goldstein’s choice of authors and topics lead to cumulative appreciation of the nuances of the United States’ colonial project.  Australia has begun to confront its settler legacy, especially in relation to the removal of Aboriginal peoples from land, and British leaders are slowly recognising the negative implications of Britain’s imperial past, publicly. However, the role of the United States as a coloniser is still tied up in its own historical struggle for independence. As Goldstein writes in his opening pages, ‘The overlapping, sedimented, and variable conditions and practices of colonization are…fundamental for understanding the complexity and specificity of the United States’ [3]. This book allows readers to take a step towards acknowledging the intricacies of America’s colonial past, and towards understanding the wider implications of U.S. colonialism, both historically and now.

Book Review: American Niceness: A Cultural History by Carrie Tirado Bramen
Book Review: An Intimate Economy by Alexandra J. Finley
Review: 'Indigenous Mobilities: Travellers through the Heart(s) of Empire,' Beyond the Spectacle (On...

Sophie Cooper is a second year PhD student and William McFarlane Scholar at the University of Edinburgh. She is studying Irish communities in Melbourne and Chicago between 1850 and 1890, specifically in relation to situational influences on identity formation and nationalist thought. Sophie tweets using the handle @SophcoCooper and more information can be found on her academia page.
View all posts by Sophie Cooper →
Tagged  colonial America, Foreign Policy, Imperialism, Native Americans.
Bookmark the permalink.