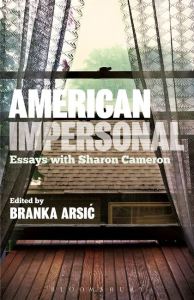 Sharon Cameron’s critical output has slowed since her emergence as a major voice on American literature in the 1980s, but, as this beguiling and suggestive volume of essays shows, her influence continues to grow as it informs the most innovative approaches to the subject in the twenty-first century. As Branka Arsić’s introduction attests, Cameron is significant because, like Stanley Cavell before her, she recognizes that it is via its literature that America has conducted the philosophical inquiry the national mind has been said to have ‘evaded’, and through its literature offers rigorous critique of the ideologies and received wisdoms of the national culture. Never is this more visible than in Cameron’s discussions of ‘impersonality’, the term that gives this book its title, which critiques in numerous ways our understanding of the ‘person’ as the fundamental ethical, political, and economic unit of democracy, and Arsić rightly instructs us to see each of the essays in this volume as a contribution to this discourse.

Cameron herself never offers a concentrated philosophical exegesis of the model of impersonality. Its conditions follow philosophical doubts which emerge from distinctly American preoccupations: for instance, national and individual self-definition, religious movements, such as the Great Awakenings, which emphasized subjective experiences of divinity, and a politics acutely focused on governance by consent. Such conditions are usually taken to contribute to the pervasive notion of individualism which appears everywhere in American culture. In contrast, Cameron proposes that, from the work of Jonathan Edwards on, American writers have consistently sought to undermine the dominance of philosophies of the self. Consequently, as Arsić writes in her introduction here, ‘American authors are involved in a search for a materialist epistemology.’ The practical meaning of this aspiration is challenging, but in essence it refers to an epistemological mode which exists in absolute distinction from the thinking subject(s), a mode of knowledge that has a singular and not pluralistic identity. Attempts to approach or access it encounter an ethics and politics unrelated to those extant in the world understood subjectively. As Cameron and her interlocutors here articulate it, this depersonalization aspires to a kind of perception devoid of perspective, as well as an attempt to align feeling with deductive, and even mathematical, concepts of the material world. Works of art take on special significance in Cameron’s thesis because, in the distinct ontology of the work, the cognitive phenomena of the creating or receiving subject can be re-experienced aesthetically, and, potentially, without the ‘personal’ interests that otherwise make our perception perspectival. 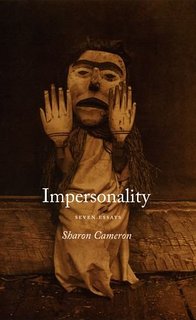 Broadly speaking, every essay in this volume links aesthetics with ways of thinking that can, in one sense or another, be termed ethical. James D. Lilley’s opening essay sets the tone by elaborating on Cameron’s reading of Jonathan Edwards’s theory of religious virtue in her 2007 collection, Impersonality. For Edwards, virtue attended the decision to consent to ‘benevolence to Being in general’—in other words, to a good will extending not only to all men, but to all things. As Lilley extends the point, this essentially communal act demands the renunciation of personal, privative impositions of meaning on aesthetic experience (this is linked to allegorical reading), and makes it instead singular, something enjoyed by consenting not to reduce it to a unique, codified meaning. Later pieces build on similar connections. Two essays, by Paul Grimstad and Johannes Voelz respectively, consider Emerson’s habit of exhorting his readers to adopt a receptive way of thinking and his extraordinarily acute recognition of the fact that commonality of experience only occurs as a consequence of our submitting to compromise on its nature—this ‘mutual attunement’, as Grimstad calls it, is the condition of our communication. Both authors go on to emphasize the impersonal element of this. Grimstad traces how submitting feeling to the shared medium of language constitutes an ‘ecstatic’ aesthetic experience, turning the personal into something generally apprehensible. Voelz, meanwhile, is one of few authors in this volume to engage in extensive critique of Cameron, and his defence of Emerson’s public style as one which effectively performs and enacts a sense of the impersonal expands on Cameron’s criticism of Emerson’s failure to represent it in his work.

Other essays in the volume offer a balanced appraisal of the viability of realized experience of the impersonal. Arsić’s own contribution is particularly striking in this respect, proposing that Thoreau’s theory of sound reflects his commitment to comprehending the non-human world as it is, and not how we interpret it. For Arsić, sound’s ‘actual sonorous vibration’ flows through the body, making it a kind of embodied and not intellectualized aesthetic. Submitting to the intrinsic qualities of sound means becoming a conduit for the objective world, a component of the ‘self-reflexivity of objectivity’ rather than its conceptual master. Echoing and, to my mind, going further than similar pieces by George Kateb and Vesna Kuiken, Arsić offers a compelling account of exactly how American aesthetic theorists differed from their European contemporaries as she elaborates on why Thoreau’s model found the Romantic and operatic compositions of his era so unsatisfactory.

If there is a tradition of American writing which seeks to materialize thought, there are also authors who appreciate the value of this aspiration, but whose outlook on its viability is more pessimistic. Kerry Larson and Theo Davis both find Hawthorne to typify this tendency. For Larson, Hawthorne’s fictions struggle to accept the proposition that the imagination has a privileged position in questioning and intervening in the material world. Larson observes Hawthorne objecting to the imagination’s non-reciprocal appropriation of the material world, something he describes as the ‘irredeemably unethical activity’ of imagining. Davis, meanwhile, uses Buddhist and Dharmic thought to explain why Hawthorne found the literary forms of his culture so ill-suited to the exposition of thought and feelings as they are experienced. The final essays of the volume bring the reader into the twentieth-century by following the ramifications of Cameron’s ideas on three authors who have always been of interest to scholars of literature’s intersection with philosophy: Emily Dickinson, Henry James, and Wallace Stevens.

Although a bold and progressive collection of essays, the potential for the ideas contained in this book remains to some extent nascent. This is, in a sense, the book’s prerogative, and it makes no attempt to apologize for it. Its emphasis on the legitimacy of theory, and on extraordinarily proximal close reading, means that its essays do not historicize. This actually contributes to their suggestive quality, and readers with an interest in a range of developing areas such as ecocriticism, the post-human, and animal studies will find much of interest in these reinterpretations of canonical American literature. As such, it is a book with its eye on the future of American literary studies rather than its past. It proposes nothing less than a fundamental revision of the American intellectual tradition, and the readings it offers provide myriad opportunities to reinterpret the place of American literature in its social, political, and historical milieu. As for American philosophy, the book substantiates a bold claim Arsić makes in its introduction. Contrary to the European tradition to which it has been compared, and through which it is always understood, attempts to distinguish between literature and philosophy in the American intellectual tradition are redundant. For criticism to come, the literary and the philosophical writings of Americans must be understood as contiguous.

Benjamin Pickford completed his PhD on Ralph Waldo Emerson at the University of Nottingham in September 2014. He is currently working on two monograph projects - an intellectual biography of Emerson focusing on his poetic theory, and a cross-disciplinary study of alternative economic models in late nineteenth-century American culture.
View all posts by Benjamin Pickford →
Tagged  C21.
Bookmark the permalink.