Islam and Americanness as Antitheses in Contemporary Media Discourses

Mustapha, a stereotypically named constructed enemy of the US army in “American Sniper” (Dir. Clint Eastwood, 2014)

A culturally widespread misperception about Islam has helped marginalize Muslims in the US into unfavorable spaces of a society, in which their religion is regularly connected with ‘terrorism’ and portrayed as ‘radical,’ ‘barbarian,’ or ‘savage.’ Tropes created by much of corporate media suggest an incompatibility of ‘Americanness’ and the American-constructed image of ‘Islam.’ Whereas islamophobic tendencies in the US public sphere have been evident for a while, current approaches in the media are reaching new degrees of bigotry by propagating an alleged Islamic threat and evoking an omnipresence of fear. The construction of ‘Islam’ works flexibly enough to perpetually represent an antagonism to ‘Americanness’ which needs to be resisted and fought.

Mohamad Elmasry has asked whether anti-Muslim violence might be consistent with some of current western ideology and whether islamophobia “has become […] so accepted, that it now represents a hegemonic system of thought?” In fact, current events have suggested a standardization of an anti-Muslim sentiment, ranging from subway ads to official policies which all fail to differentiate between Islam and terrorism. A 2015 Hollywood movie inspires to kill Muslims. A muslim school is vandalized with hateful graffiti. Commuters on subways in New York were encouraged to “defeat Jihad.” A billboard proclaimed “19,250 deadly Islamic attacks” since 9/11 “and counting,” evoking an omnipresent threat with a continuity of a violence that is supposedly inherently “Islamic.” Another manifestation displays the burning towers of the World Trade Center next to a quote from the Quran, implying that Islam in itself is the source of evil. Much of anti-Muslim expression is based on the simple dichotomy of the civilized, liberal, democratic West whose values and mere existence are perpetually threatened by the barbarian, Muslim savage – as discussed in Edward Said’s Orientalism. 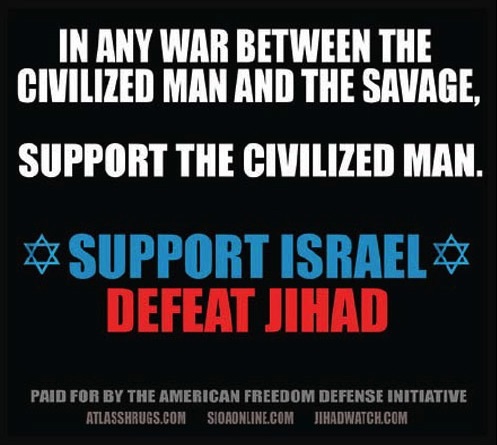 Muslim Americans are constantly confronted with the requirement to pledge allegiance to their country. Republican Molly White from Texas exemplified very well how anti-Muslim discrimination can be a standard. Her demand for Muslim Americans to publicly announce their loyalty to the US disclosed the common dogma that belonging to America presupposes a renunciation of Islam. White would embrace Muslims as fellow citizens only if they love America and condemn ‘Islamic terrorism,’ asserting that terrorism is essentially Islamic: “If they come here and convert to the American way of life I may be more willing to trust […] When they come here to advance their way of life, Islam, then no trust there.” According to this ideology, Islam can never be part of a pre-defined concept of what it means to be ‘American.’ White completely ignores millions of Muslim US-citizens when she defines representatives of Islam as “they,” who “come” to the US. In White’s formulation therefore, access to ‘Americanness’ would require a rejection of Islam.

These assumptions all lead to the ideology that Islam is an antithesis to ‘Americanness.’ While terms such as ‘jihadism,’ ‘terrorism,’ or ‘radicalism’ are regularly used in discussions of Islam, the questions of how terrorism is defined theoretically and how it appears empirically remain absent from mainstream discourses. As Said ascertained: “[O]n the one hand America is not at war with Islam but only with terrorism, and on the other hand (in complete contradiction with that, since only America decides who or what Islam and terrorism are), ‘we’ are against Muslim terrorism and Islamic rage as ‘we’ define them.” The missing definition of ‘terrorism’ is filled with false knowledge of Islam.

As a self-proclaimed expert on terrorism, Brigitte Gabriel – who in her own work interchanges ‘terrorism’ and ‘Islam’ as synonyms – makes evident that it is morally accepted by much of US media to demonize and insult Islam. Gabriel propagates an evil construction of Islam when she equates ‘radical’ with ‘practicing’ and ‘moderate’ with ‘non-practicing’ Muslims:

A practicing Muslim goes to mosque, prays five times a day, doesn’t drink, believes God gave him women to be his property — to beat, to stone to death. . . . He believes Christians and Jews are apes and pigs because they are cursed by Allah. He believes it is his duty to declare war on the infidels because they are Allah’s enemies. […] A non-practicing Muslim no longer goes to mosque or prays five times a day […] Those [non-practicing] Muslims are […] about 2 percent — they are irrelevant because it is the majority that is causing the problem now.

Islamophobes like Gabriel stay relevant when they daily appear on the TV screens of a largely misinformed population warning them of an existential Islamic threat. Gabriel’s ignorance about Islam suggests a mere dehumanization of 98% of the religion’s 1.6 billion adherents. As Alex Lubin argues, the Orientalist draws his authority not from experience but from an archive constructed by other Orientalists.

Even when physically attacked, Muslim-Americans are not given the same share of empathy as other groups by the media. The shooting of three Muslims in Chapel Hill in February 2015 entered the news only after protests through social media over the corporate media’s refusal to report about the crime. Ibrahim Al-Marashi claims that “Muslim Americans tend to be newsworthy when implicated in acts of terrorism.” People who commit anti-Muslim hate crimes are usually portrayed as misguided – but their culpability will most likely not be related to their religious identity, nor will they be depicted as representative of a whole community. Although Islam is not always equated with terrorism, it is alarmingly often seen as the source of violence and pre-defined as the essential threat to America in various discourses. Rarely are Muslim individuals given the human privilege of individual responsibility – instead of collective (and wrongful) culpability – which in the US more often than not seems to be reserved for non-Muslims only. When once again reinforcing the idea that (‘radical’) Islam is the source of terrorism, CNN employee Don Lemon seriously asks human rights lawyer Arsalan Iftikhar: “Do you support ISIS?” Simultaneously, citizens are warned that every Muslim in the US is a time bomb waiting to implement the sharia. 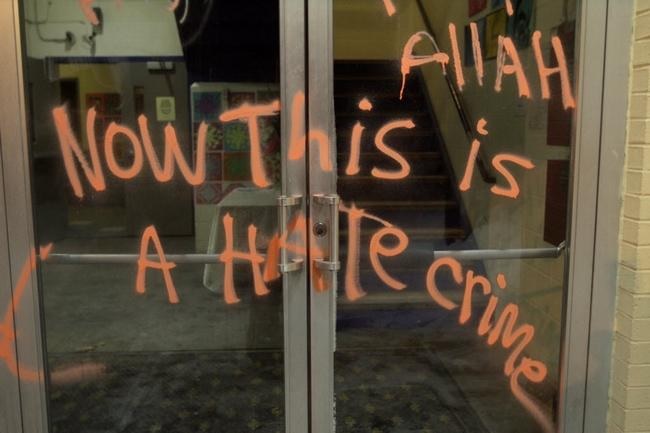 Even President Obama – who claims to reject dichotomous narratives – locates terrorism within a Muslim framework by demanding: “Muslim communities, including scholars and clerics, therefore have a responsibility to push back, not just on twisted interpretations of Islam, but also on the lie that we are somehow engaged in a clash of civilizations.” Simply put, Muslims are expected to condemn terrorism, to perpetually prove their belonging to the US and to re-humanize themselves within the US – not because some lunatics commit violence wrongfully in the ‘name of Islam’ (all religions are abused for the sake of violence) but because a part of the US population and the significantly powerful majority of the corporate media is at war with Islam, or what they perceive to be their ultimate enemy.

The crucial problem with the targeting of Muslims is not that Muslims are not speaking out as there is visible cultural resistance against their marginalization. The danger stems from the moral and cultural acceptance of anti-Muslim ideology which eventually enforces a dangerous ambivalence onto Muslim Americans: while they are broadly depicted as the enemy, they are simultaneously expected to renounce their own identity for the sake of inclusion. Excluded from the mainstream privilege, Muslim-Americans struggle with a dehumanization other groups in the contemporary United States are not confronted with, whereas an uninformed picture of Islam becomes the embodiment of America’s antithesis. As Islam in the US is nowadays collectively filling the space of the foreign ‘Other,’ Muslim(-American)s are clearly victims of an islamophobia that is deeply rooted in much of Western culture and that restricts their visibility in the public sphere to a perceived menace.

William Faulkner by Kirk Curnutt
Fargo 1996, Fargo 2014, and the Art of Homage
'Is It Because I’m Black?': The Music Industry, Image, and Politics in the Careers of Syl and Syleen...