Artists such as KRS-One, Public Enemy and Chuck D. position themselves as heirs to the legacy of the Panthers and Malcolm X by creatively updating the “media-conscious iconography of sixties black radicalism for a 1990s constituency”, says Hannah Jeffery. 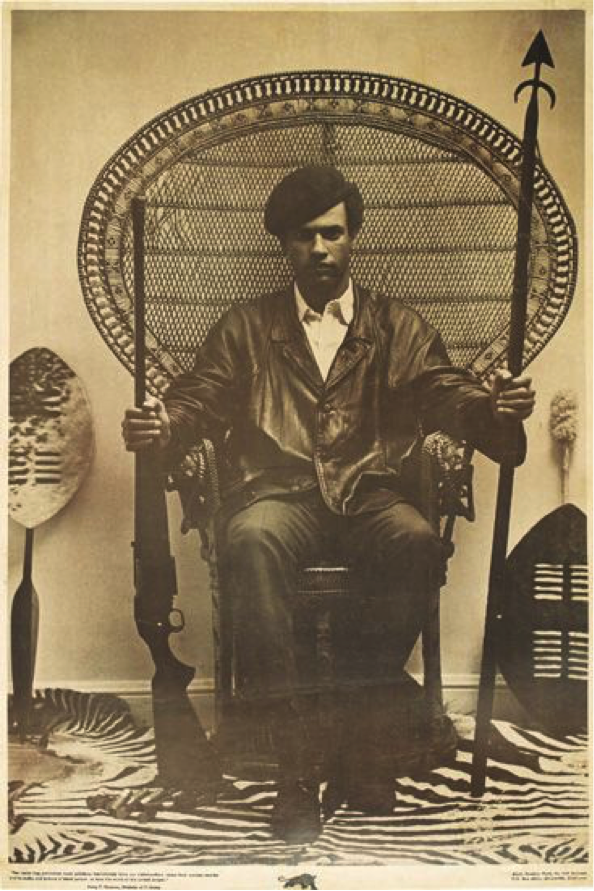 Hip-hop music is controversial. Whether it’s N.W.A telling people to ‘fuck the police,’ Ludacris telling the world that he’s got hoes in different area codes or A Tribe Called Quest asking us if we can kick it (yes we can), hip-hop is a misunderstood musical genre, quickly lambasted for its explicit language and violence. Through various motivations- money, protest, partying, promoting a message- the malleability of hip-hop has been tested, resulting in many forms; mainstream, gangsta, dirty south, conscious, political, underground, old school, new school. Although each category deserves attention in its own right, this post focuses specifically on the conscious/political genre of hip-hop music, unveiling ways in which artists from the 1990s draw on Black Power visual culture for racial protest within their own music.

In 1993, Jeffrey Louis Decker suggested “today’s nation-conscious rappers draw their inspiration primarily from the black power movements of the 1960s.”[1] Whilst 1960s Black Power advocates were striving for political and economic control of their own lives, with the Black Panther Party calling for education, housing, black self-determination and an end to police brutality, the racial climate in the 1990s was still strained. Politically conscious hip-hop artists vocalised the plight of African Americans through frequent references to racial profiling, the prison industrial complex, the war on drugs and black-on-black crime, doing so in conjunction with rhetorical and visual allusions to Malcolm X and the Panthers. As Michael Eric Dyson proposes, it’s Malcolm X’s expression of black rage that confirms artists instincts about the “permanence of American racism.’”[2]

Malcolm X is frequently remembered for his defining soundbite ‘by any means necessary’ given during his 1964 speech of the same name. Advocating the use of violence for African American self-defense, the infamous phrase was accompanied by a photograph that was made into a political poster, presenting a defensive Malcolm X peering through a set of blinds into the street. 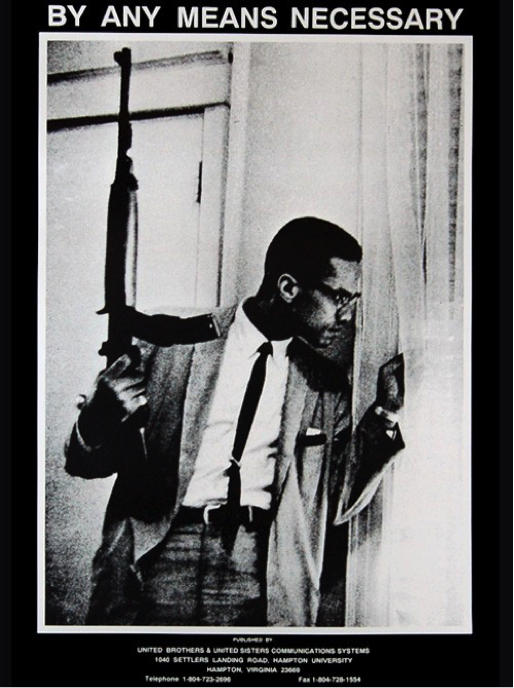 The most obvious allusion to the 1964 political poster comes from Boogie Down Productions’ (BDP) second album By All Means Necessary (1988), tailoring the image for their personal agenda by speaking out against racial issues yet not diluting the image of original sentiment. BDP’s frontman, KRS-One, creates an urbanised replication of the poster, donning BDP leathers, a flat cap and sunglasses in comparison to Malcolm’s smart attire. Whereas Parker’s primed stance conveys his readiness for the unknown threat, Malcolm X portrays his preparation and awareness through his attire’s attention to detail; suit, tie clip and pocket cloth- the inevitability of an attack leaves his daily preparation unfaltered allowing him to stand calmly on guard. 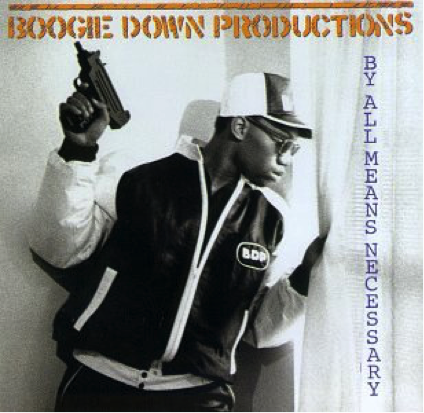 Manipulated and recontextualised, KRS-One used the powerful Black Power slogan and visual iconography to illustrate his desire to keep rapping after the fatal shooting of BDP member, Scott ‘La Rock’ Sterling. A victim of black-on-black crime, Sterling was shot in 1987, a year prior to the release of By All Means Necessary. Carefully selected from an extensive repertoire of soundbites and striking visuals, KRS-One chose this specific Malcolm X image because of its potency in the 1960s, feeling it was relevant for modernisation. Replacing ‘any’ with ‘all,’ was a historically motivated decision, believing ‘any’ was applicable to the 1960s because it applied to his parents’ generation. Instead, he feels ‘all’ is something more specific- inferring “I have plethora of means to kick your ass.”[3] Through his political and historical self-awareness, KRS-One created a pioneering album that illustrated the socially conscious inclination of hip-hop music, using the power of Malcolm X’s beliefs and image to give voice to his own concerns regarding violence within the African American community.

Contemporary echoes of Black Power visual culture cannot be discussed however without mentioning Public Enemy (PE). Being dubbed “hip-hop’s version of the Black Panther Party for Self-Defense,”[4] the group positioned themselves as community spokesmen, believing “rap is black America’s TV station… [giving] a whole perspective of what exists and what black life is about.”[5] It is PE’s visual presence that is most akin to the Panthers. Wearing Panther berets, black gloves and a Panther-style jacket and fatigues, PE recontextualise Black Power imagery creatively by updating “media-conscious iconography of sixties black radicalism for a 1990s constituency.”[6] 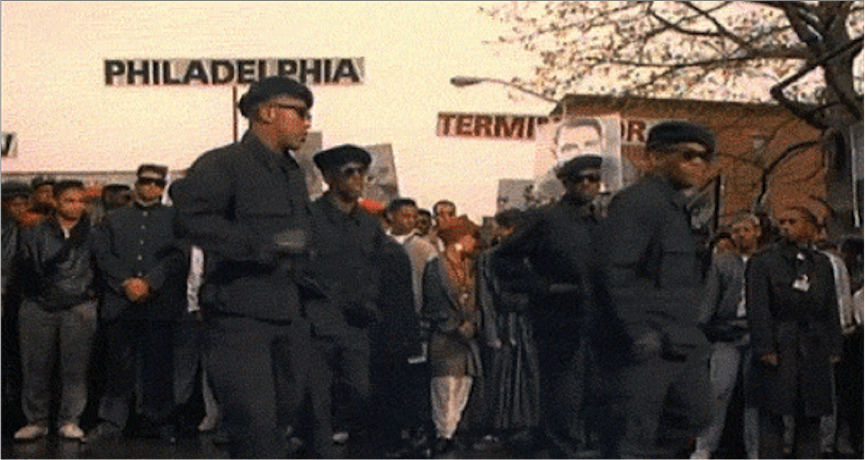 Nowhere is this more perfectly illustrated than Spin magazine’s 1991 photo-shoot of Chuck D. Upon Chuck D.’s request, the original spread quickly evolved into an homage to the late Huey P. Newton as the magazine agreed to restage his infamous peacock chair photograph.[7] Replicating the photo with a contemporary edge, Chuck D. attempts to disseminate an iconic moment in the visual history of the Panthers whilst attempting to instil black empowerment in a 1990s audience, but instead does it “decked out in “homeboy fashion”: high-top, brand named, leather basketball sneakers, black baseball jacket and cap with PE insignia logo.”[8] 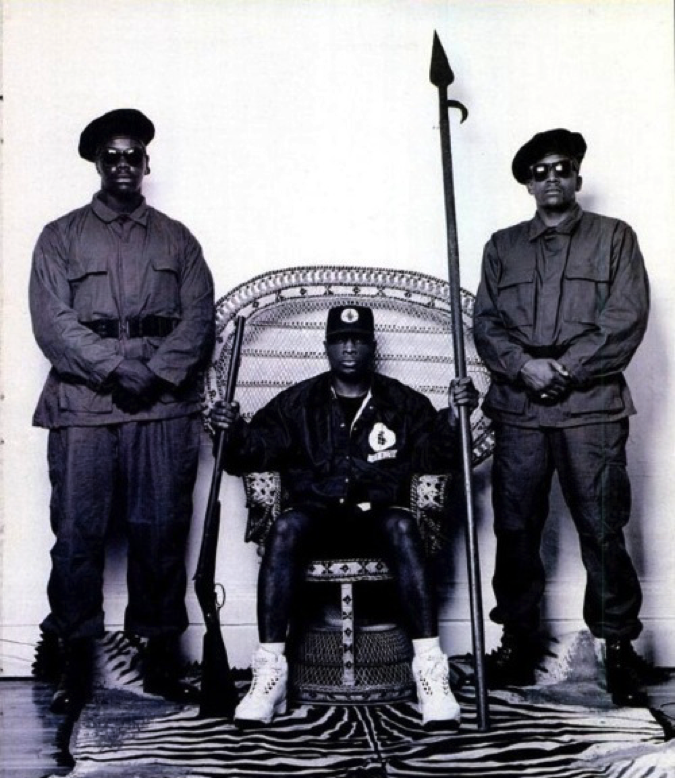 There are nuanced differences between the photographs however; Chuck D. is presented as the heir to Black Panthers, with Newton as the founding father, through his smaller chair and larger spear, making him diminutive in comparison. There’s almost an infant-like quality in Chuck D.’s pose, also echoed in his passive facial expression and relaxed arms- a child sitting in his father’s chair, practising for when he takes up the mantle of revolutionary protest. Newton comparatively strikes a stronger pose with an intense gaze; tension coursing through his arms to a firm grip upon his weapons. Appearing as the dominant adult, Newton has one foot placed in front of the other, prepared to launch towards any impending confrontation, spear in hand. Chuck D.’s wide foot placement by contrast, appears more passive. The Panthers mantra of physical self-defense is usurped, as Chuck D. is ready to stand and fight lyrically to promulgate the ideological beliefs of the Black Panther Party to promote black self-determination in the 1990s. Growing up in the 1960s and having political and cultural groups like the Black Panthers, and the Nation of Islam as reference points, it seems only natural therefore that Chuck D. feels compelled to create such visually reminiscent magazine spreads, peppering his lyrics with Panther references.

Black Power references are commonplace within political/conscious hip-hop music, both visually and rhetorically, and whilst Chuck D. lamented in arguably the most famous PE track, “Fight the Power,” (1989) popularised by Spike Lee’s racially charged movie Do The Right Thing, that “most of my heroes don’t appear on no stamp,”[9] himself and KRS-One attempt to promulgate the visual culture of the Black Power era through their own personal replications, ensuring the memory and legacy of the Panthers and Malcolm X never slip from the sill of public consciousness.

Post updated 12.30pm due to minor factual error. Spike Lee’s 1989 movie was not Fight the Power but Do The Right Thing.