Glen Whitcroft re-evaluates the financial and musical legacy of some of America’s most beloved and commercially successful African American entertainers, such as James Brown, Aretha Franklin, and Nina Simone. 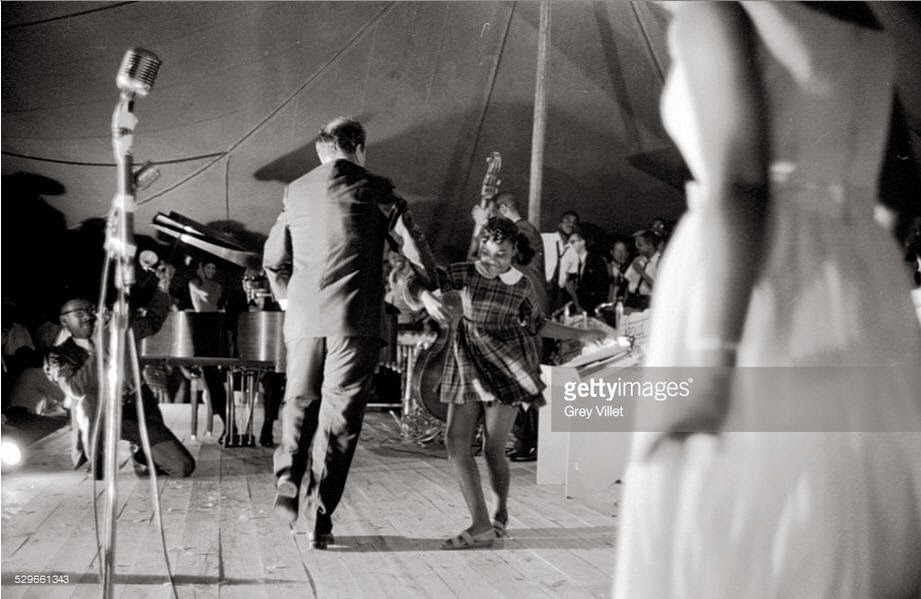 Rhythm and Blues, a genre rooted in the gospel tradition with elements of the blues and soul, increasingly became a prevalent genre during the civil rights movement. R&B, much like gospel music, encouraged and inspired the African American community, but furthermore, it directly challenged and confronted racism amongst the white population by desegregating musical traditions. The songs of artists such as Sam Cooke, Nina Simone, Syl Johnson and James Brown went beyond the African American sphere and reached a mass white audience, with singer Syl Johnson commenting, ‘the younger whites became our fans, they just loved that music. That was the key. The young people became the fans of those people who were being buked.’[1] The role of R&B music and how politically and socially inspired songs provided a soundscape for the civil rights movement is of paramount importance. However, the wider objective of this piece is to appreciate how R&B music aided the advancement of contributions made by gospel singers and freedom songs, financially and otherwise.

The freedom songs, beyond the sense of hope and encouragement they conveyed, were used to generate vital funds for the movement in a variety of ways; evidenced most notably through SNCC Freedom Singers. Debate has arisen as to whether their R&B counterparts were contributing to the movement in the same capacity. Although evidence suggests some R&B musicians made a considerable financial contribution to the movement, a number of musicians involved in the quest for equality have stated that their contributions were insufficient and irregular. Bernice Johnson Reagon, a civil rights activist and member of the SNCC Freedom Singers, commented that ‘we really thought those people should be sending money. They should be doing benefits. We thought all of them should be there. But, you know, what you think and what they think are different things… Sometimes, I think, they couldn’t quite see an interest.’[2] Although evidence suggests that R&B musicians were late in providing a voice for the movement, a number of its musicians, such as James Brown, Aretha Franklin, and Nina Simone, did partake in fundraising events and support the cause monetarily.[3] 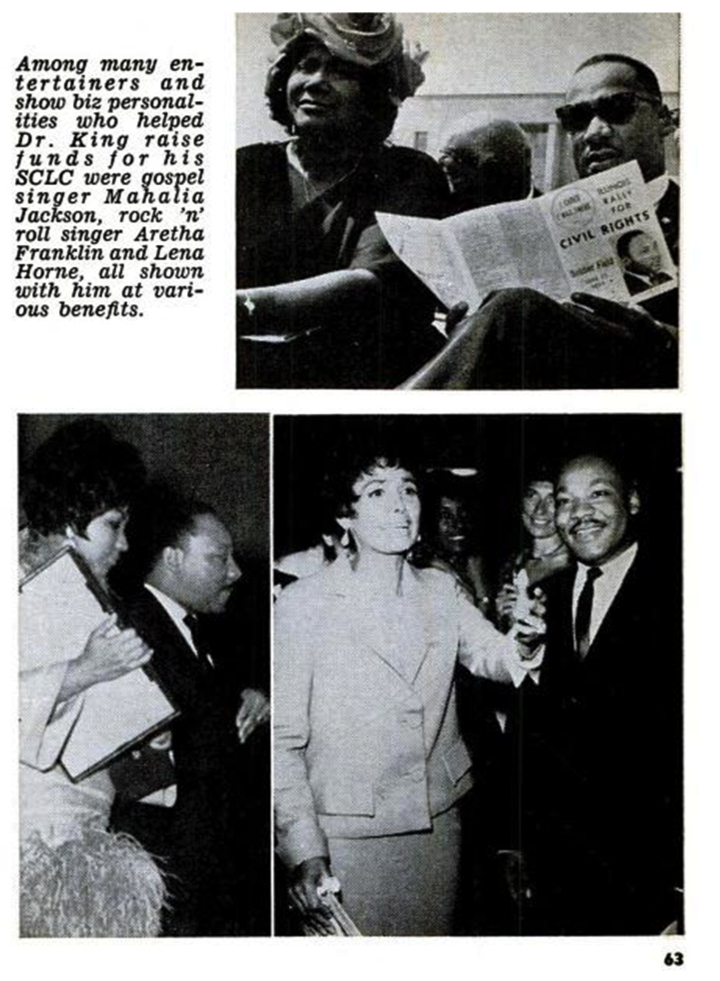 Simone, although reluctant to be considered ‘involved’ in the movement, did contribute significantly by way of encouragement and finances, noting in her autobiography, ‘I was just spurring them on as best I could from where I sat – on stage, an artist, separate somehow.’[4] In a BBC Hard Talk interview in 1999 she spoke of her desire to ‘move the audience, to make them conscious of what has been done to my people,’ and reflected on her performance during the Selma to Montgomery March.[5] The Congress of Racial Equality’s ‘Fundraising Department Report’ from October 1965 reveals Simone’s husband and manager Andy Stroud agreeing to a deal whereby Simone would perform at fundraisers for the organization, which according to the documents would raise roughly $2,000 per concert.[6] Simone would also lend her talents to the ‘Salute to Freedom, 1963’ fundraising concert for the March on Washington that would also boast performances from Ray Charles, Johnny Mathis, and the Shirelles. JET Magazine reported that ‘more than 13,000 Negroes and whites’ were in attendance, and that ‘when the show ended at nearly 3 a.m., the following morning, a majority of the 13,000 were still in their seats’ and civil rights groups participating in the August 28th march on Washington D.C., had gained over $10,000 in proceeds, with a grand total expected to reach the neighbourhood of $50,000.[7] According to Billboard magazine, the ‘Salute to Freedom, 1963’ concert was the ‘first integrated variety show to play before a non-segregated audience in Birmingham, Alabama.’[8] The money raised at the ‘Salute to Freedom, 1963’ concert would be very significant. It contributed to the costs of the March on Washington, which would become a pivotal event in civil rights history. King was provided with a platform to convey his I Have a Dream address, and various musical acts, gospel and secular, were able to invade the social consciousness of white America and encourage African Americans, with songs of hope and determination. Further fundraisers would occur throughout 1963, with Ebony magazine recounting a rally in Los Angeles which would see over $55,000 contributed to finance the civil rights struggle. The majority of this money came from Hollywood stars such as Dorothy Dandridge and Rita Moreno, and included a $20,000 donation from Sammy Davis Jr., which accounted for ‘a full week’s salary for a Las Vegas night club engagement.’[9] 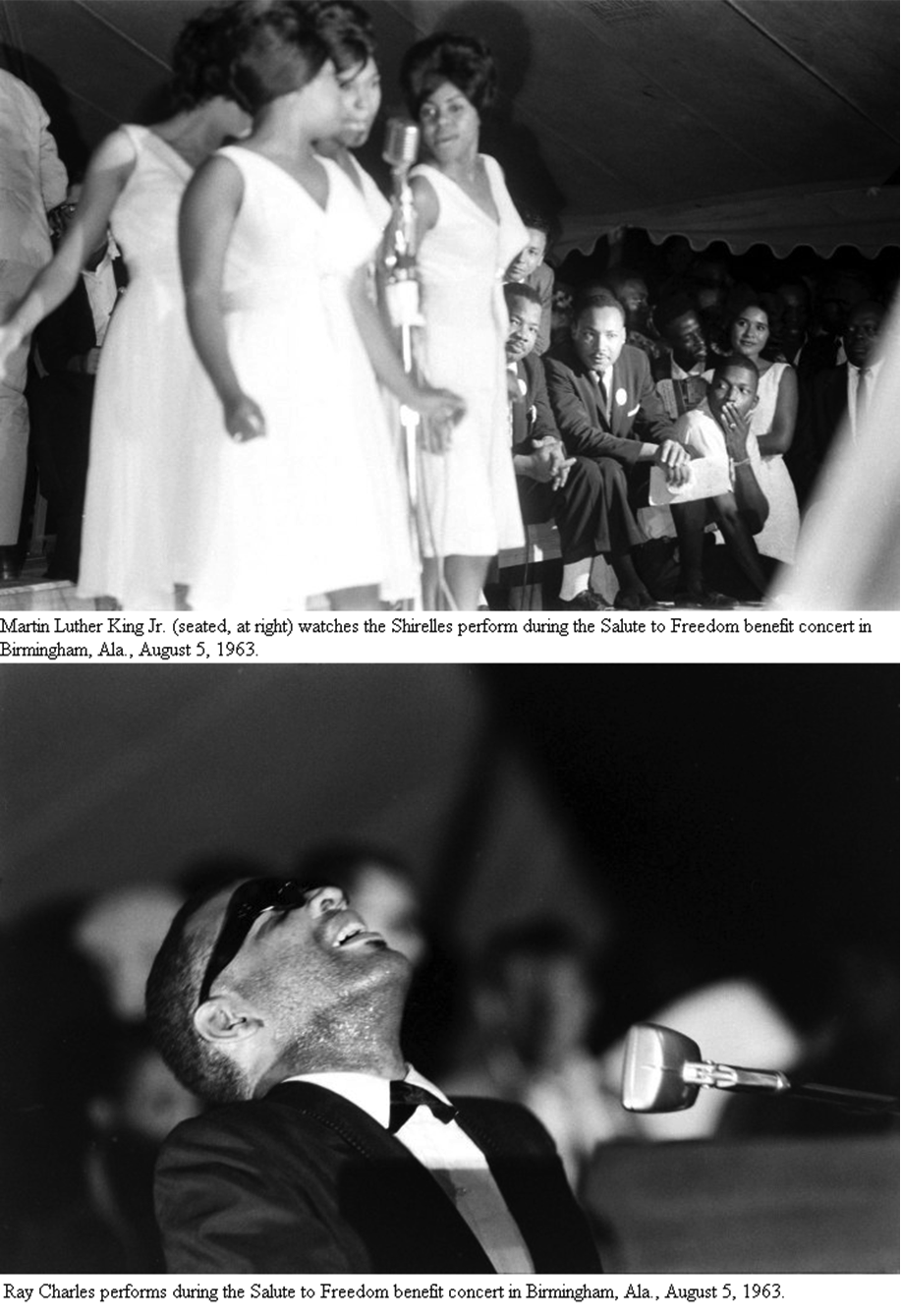 During the March Against Fear in June 1966, organized by James Meredith, James Brown would partake in a benefit concert following the shooting of Meredith, and would make it a priority to perform at benefit events.[10] Brown’s greatest financial contribution was his own initiative, ‘Operation Black Pride’, where, beyond cash donations to black causes, he reportedly dressed as Santa Claus and presented 3,000 certificates for free Christmas dinners in the poor black neighbourhoods of New York City in December 1968. Brown stressed: ‘Nothing I can do to help Black people will be too much… I owe it to the Black community to provide money for scholarships, to help children stay in school, to help provide jobs, to help equip playgrounds and recreations centres to keep the kids off the streets.’[11] Brown’s contributions went beyond financing the leaders of the movement, he enabled the black community to help themselves, through education, and bettering their communities. Franklin is also known to have been actively involved in events to benefit the civil rights movement, to which she had a close ties through the work of her father Reverend C. L. Franklin. During an SCLC fundraising tour of eight major cities towards the end of 1967, entertainer and activist Harry Belafonte affirms, ‘we had guest appearances by Aretha Franklin and Sammy Davis Jr., among others… In Houston we got a large crowd, perhaps because Aretha Franklin sang for us that night…’[12] Biographer, Mark Bego, refers to Franklin’s ‘homecoming concert’ at Cobo Hall in Detroit on February 16, 1968, which was attended by King to present Franklin with a special award on behalf of the SCLC in honour of her contributions to the movement and black advancement in society. Bego commented that ‘in Aretha’s first year of international fame she had become an inspiring symbol of black equality. With her own sense of pride and her dignified stance, she represented the new black woman of the late 1960s. In her own way she embodied the social and cultural change that was taking place in the country…’[13] Further to her financial contributions, Franklin’s musical output, although she suggests otherwise, was politically relevant and challenging.[14] Songs such as Respect, Hard Times, and God Bless the Child were songs that conveyed a message to African Americans, and women, struggling with inequality in society. 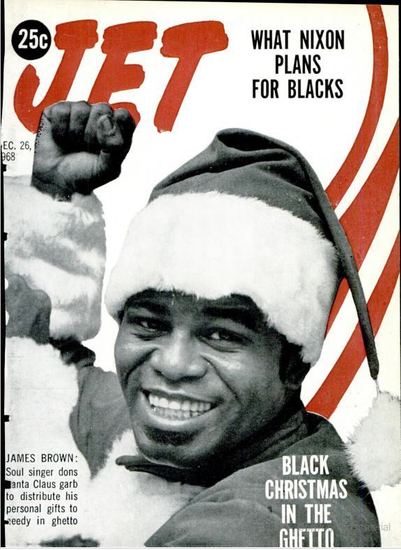 Evidently, regardless of Reagon’s accusations, musicians from the R&B genre were generating income for the movement; arguably their contributions may have been more irregular, however a considerable amount of money was raised through their performances. Reagon has also vocalised her belief that it took R&B entertainers too long to get involved in the movement – however it is interesting to note that the SNCC Freedom Singers weren’t formed until 1963, at which time R&B artists, as noted, were partaking in fundraising events. However, whilst for the most part, freedom songs and gospel music was motivating and encouraging the quest for equality since the mid-1950s, R&B musicians didn’t noticeably engage with the movement until the mid-1960s. Michael Haralambos suggests that the involvement of R&B musicians somewhat corresponded with the intensity of the movement, arguing, ‘the evolution of soul music closely parallels the stages in the black movement for civil rights and self-determination. The scattered soul records from 1954 to 1960 correspond to the black struggle during those years which was intermittent and sporadic… The convergence of styles towards soul music from 1960 to 1964 corresponds to the protest movements of the early ‘60s when the civil rights struggle became a mass movement’.[15] Evidently, R&B music developed into a necessary and potent force in the African American quest for civil rights.

[14] In her 1999 autobiography, Franklin stated ‘I don’t make it a practice to put my politics into my music.’ However, her lyrics suggest, even subtly, that the political position of African Americans and women, were at the forefront of her mind. Quote taken from, A. Franklin, Aretha: From These Roots, (New York, 1999), p. 155.

“MATTER IS THE MINIMUM”: Reading Washington, DC’s BLM Memorial Fence
Storify of our #bookhour twitter chat on "Herland" by Charlotte Perkins Gilman
Trump and the Republican Party—Precessors and Limits

Glen Whitcroft is a current PhD student at Northumbria University, working under the supervision of Professor Brian Ward. His research interests are rooted generally in African American music, with emphasis on its social and political impact. Following on from research conducted with Catherine Clinton at Queen's University Belfast, his PhD research topic is entitled 'We Shall Overcome: Music, Protest, and the Quest for Civil Rights in the United States and Northern Ireland, 1955-1975.'
View all posts by Glen Whitcroft →
Tagged  African American Culture, Black History, Blues, C20, Celebrity, Civil Rights, Cultural History, Gender and Sexuality, Jazz, Media, Music, Politics, Popular Culture.
Bookmark the permalink.