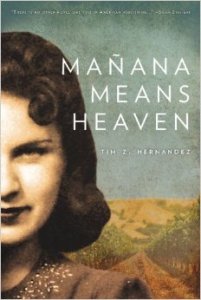 During April’s #bookhour discussion Dr Niamh Thornton, Dr Nicola Moffat, Eilidh Hall and Dr Donna Maria Alexander discussed the deeper meaning of the narrative and paratextual elements of the novel, the significance of biography in the third person, and how the landscape and cityscape functions alongside the two key characters of Bea Franco and Jack Kerouac. A number of questions arose from the discussion, including the extent to which the novel mediates differing notions of the American Dream in relation to race gender and class, and how the novel can be read as a departure and even a critique Kerouac’s traditional ethnographer stance to authorship and writing. They rounded off the discussion by considering other books that have retold stories of marginal characters in books and history. The discussion leaders were joined by the author, Tim Z. Hernandez who responded to their questions and commentary.

Mañana Means Heaven, which is based on the life of Bea Franco, was published in 2013 and went on the receive the 2014 International Latino Book Award in historical fiction. It explores the story behind the almost mythical Mexican woman featured in Jack Kerouac’s On the Road. Set against a rich backdrop of 1940s California the novel paints a compelling portrait of the relationship between Bea, a migrant worker struggling amid an unhappy marriage, poverty, violence and the threat of deportation, and Kerouac, a young beatnik writer travelling across the U.S.

Read more about the book at the LA times and PRI. Reviews of the book can be found on Tim Z. Hernadez’s website.

Questions for the discussion

Q1. Why is it written in third person and not through Bea’s voice? (Nicola Moffat)

Q2. Why are there blank pages between some chapters and not between others? Do they signify a lapse in time? (Nicola Moffat)

Q3. What issues arise with the paratextual elements of the book? (Niamh Thornton)

Q4. What is the meaning of the refusal of closure in both the narrative and the paratextual elements? (Niamh Thornton)

Q5. While described as a “counter-narrative” to On the Road, can Mañana Means Heaven also be read as a Beat novel? (Donna Marie Alexander)

Q6. To what extent can LA and the southwest be considered almost another character in the book? (Eilidh Hall)

Niamh Thornton is a senior lecturer in Latin American Studies at the University of Liverpool. She has a particular focus on Mexican and Chicana/o film and literature. Her key interests are conflict, violence and the war story. She have also written about gender, queer representations and digital cultures (Internet, social networking sites, YouTube etc). She has published several chapters and journal articles as well as two monographs and four co-edited books. The most recent publications are Revolution and Rebellion in Mexican Cinema (Bloomsbury, 2013) and, with Catherine Leen, International Perspectives on Chicana/o Studies: This World is My Place (Routledge, 2013). For more, see her website: http://www.niamhthornton.net/.

Nicola Moffat has just completed her PhD in UCC’s School of English and her research interests include gender and sexuality studies, contemporary literature, and the affectivity of monstrous bodies/texts. Her thesis, titled “Monstrative Acts and Becoming-monster: On Identity, Bodies, and the Feminine Other,” examines the effect of (speech) acts on the body of the feminine Other and the subsequent effects such Othering has on the identity of the one who acts. Born in Cape Town, South Africa, Nicola now lives in Cork city, Ireland.

Eilidh Hall is a PhD student at UEA in the American Studies department. She is interested in women, family, feminisms, Chicana/o literature & culture (amongst other things). Eilidh is co-jefa of The SALSA Collective – check it out at www.thesalsacollective.co.uk. You can also find her on Twitter @eilidhabhall.

Celebrating Neutrality? What We Can Expect from America's Ongoing Centennial Commemorations of the “...
Social Disorder: Publics, 1968, Amateur photography and Vivian Maier
The Toppling of Þorfinnur: Vandalism as Dialogue and Direct Action