The United States Christian Commission and the Civil War Dead

The notion that the Civil War wrought huge changes in the way Americans thought about death and dying has been well established in recent scholarship.[i] Already intimately and inescapably familiar with death, thanks to high infant mortality rates, industrial and transportation disasters, and frequent epidemics, America during the sectional conflict was confronted by the violent, often instantaneous death of the relatively young on a massive scale. Among those who attempted to make sense of the carnage were the evangelical civilian volunteers of the northern United States Christian Commission. They, when stationed in military hospitals and army camps, were privy to the dying moments of many soldiers.

Like many civilians separated from imperilled loved ones by distance, Christian Commission workers were deeply perturbed by the ways in which war anonymised and dehumanised its dead. The array of devastating weaponry threatening to obliterate and disfigure the body, stripping away its individuality and identity, and the lack of systematised methods of identifying and repatriating remains meant many men faced burial in unmarked, mass graves.[ii] This was a far cry from the “Good Death” so prized in antebellum northern culture, with its sentimental death-bed scene, the (elderly) individual imparting words of comfort and wisdom to the gathered family before expiring peacefully, confident of eternal life in heaven. 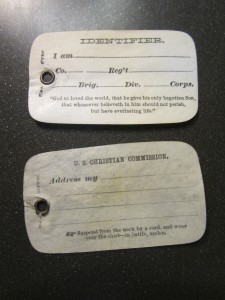 To aid in the identification of remains, and to alleviate the distress felt by bereaved families unable to ascertain the final resting-place of their sons, the Christian Commission distributed small identifier tags (Fig. 1.) – a rudimentary precursor to metal dog tags – to troops they encountered.[iii] These flimsy card tags left space for the name, regiment, and rank of the soldier, and on the reverse, a forwarding address where family could be contacted and to which effects could be sent.[iv] Impractical and inadequate though the tags no doubt were, they displayed the Commission’s interest in promoting the ordinary soldier from an anonymous cog in the Union army machine to a mortal individual.

Moreover, the tags made explicit the evangelical, postmillennial agenda of the Christian Commission. The Commission, in keeping with mainstream evangelical interpretations of the war, saw the conflict as a holy crusade that would cleanse America of sin and restore her to her role as the new Israel, the “redeemer nation” charged with precipitating the millennium through her moral example.[v] If the war was a holy crusade, then those converts who died in the name of a divinely-sanctioned, antislavery Union were, crucially, Christian martyrs. Within the worldview of the Commission, the courageous deaths of converted men would thereby further God’s Kingdom on earth.[vi] The Christian Commission contributed heavily to an emerging vocabulary of blood sacrifice and atoning death that attempted to justify the horrific death toll of the war. It explained that the blood of the fallen soldiers would help to atone for the sins, not only of slavery and Northern complicity in the institution, but also of Northern materialism, greed, and secularism.[vii]

This idea of redemption gained through bloodshed was a recurrent theme in the hymns commonly sung at Commission prayer meetings and services. Like the popular refrain, ‘There is a fountain filled with blood drawn from Emmanuel’s veins / And sinners plunged beneath that flood lose all their guilty stains,’ the third stanza of another beloved hymn, “Come, Thou Fount of Every Blessing,” also emphasised the centrality of blood to atonement: ‘Jesus sought me when a stranger, / Wandering from the fold of God; / He, to rescue me from danger, / Interposed his precious blood.’[viii] In both these cases, the blood involved was that of Jesus Christ. 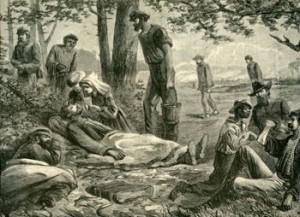 However, this gory symbolism took on a new significance amid the bloodshed of the war, as the sacrifice of Christ crucified was increasingly equated with that of the Union soldier dying on the battlefield. The cleansing blood of Christ was substituted with the blood of Union soldiers staining the fields of Virginia. As Commission member J B Roberts told a meeting in San Francisco, ‘[the Union soldier] sacrifices himself for the nation as Christ sacrificed himself for our redemption.’[ix] Just as humanity was washed clean of sin by Jesus’ blood, so the Union was being cleansed by the blood of young martyrs falling in their thousands, prostrating themselves on the altar of the nation.[x]

The identification tags distributed by the Christian Commission endorsed this sanguinary parallel. On the reverse of the card tags, a famous Bible verse was printed: ‘For God so loved the world, that he gave his only begotten Son, that whosoever believeth in him should not perish, but have everlasting life’ (John 316).[xi] This verse held a dual significance. It was both a reminder of the promise of salvation and life after death, and a comfort to the soldier advancing into battle and imminent destruction. Its inscription on an item intimately connected with violent death implied that the willing and noble sacrifice of the wearer in battle was on a par with Christ’s own violent death.

In the same way that Christ crucified represented the absolution of the human race from sin, the corpses of the Union dead thus symbolised for the Christian Commission the cleansing and regeneration, not only of the Union, but of the world.[xii] But in subsuming each death into a collective, national sacrifice, the inclusion of John 316 on the tags implicitly undermined the work of restoring individuality and human identity to the wearer. By incorporating each fallen Union soldier into a faceless martyrdom, the tags also served to perpetuate the very anonymity they were designed to deny.

“The show will go on”: the successes of Trump and Sanders push back the end of the primary elections
For a Series so Concerned with Leaning into the Horror, The Handmaid’s Tale Utterly Fails to Address...
Zora Neale Hurston: Life and Works

Rachel Williams is a Lecturer in American History at the University of Hull. She is currently working on a book about civilian relief agencies in the Civil War era.
View all posts by Rachel Williams →
Tagged  C19, Civil War, Religion.
Bookmark the permalink.