An Assessment of the American Civil War Sesquicentennial

Essentially a formal synonym for ‘150 years’, ‘sesquicentennial’ has recently appropriated a new connotation, becoming the by-word acknowledging the 150th anniversary of the American Civil War (1861-1865). As the end of the conflict’s commemoration approaches, it is a pertinent time to assess the anniversary’s meaning and evaluate whether one of the most troubled periods of America’s past carries resonance in American memory 150 years later.

The use of sesquicentennial in its Civil War context began in December 2010, appearing in stories about the re-enactment of Charleston’s Secession Ball. Given how much Civil War memory is kept alive by keen enthusiasts and re-enactors, such an event was expected. However, problems arose over the issue of whether such commemorations should have occurred at all. The reasons behind secession are inextricably linked to the defence and perpetuation of slavery that the institution the Confederacy physically fought to maintain. South Carolina’s re-enactment was not an isolated occasion. The Washington Post stated that various southern states’ secession anniversaries created “minefields of nuance” when commentators and politicians referenced or simply ignored these events.[1] Subsequent engagement in the Civil War’s 150th anniversary has at best been undertaken on tiptoes. This has created a pervading sense that the last four and half years have been a “missed opportunity” to generate “a greater national effort [to] commemorate and examine the Civil War”. There has been no “grand, solemn remembrance” of any of the war’s major moments. Battle re-enactments have happened regardless of any special anniversary year. Likewise, performances of the conflict’s key political speeches, namely Abraham Lincoln’s inaugural and Gettysburg addresses, occur annually as part of a continued national culture of historical acknowledgement.[2]

This raises the question of whether the sesquicentennial matters. Does the fact that events occurred 150 years ago give them a significance that differs from any other year? Bound to it is the Civil War’s meaning in America today. Concern about missed opportunities and unresolved debates over the war’s legacy rests on the fact that the war never truly ended in 1865. The Washington Post conducted a poll in 2011 on “the lingering legacy” of the conflict. In a rank of America’s most important military engagements, the Civil War came third with 20% of the vote. The poll breakdown is revealing. The question was divided into white and African American responses: 35% of the latter saw the Civil War as the most important. Had the result been taken on its own, the conflict would have come first. As the Post explained, “Civil War views continue to vary along racial lines”.[3] 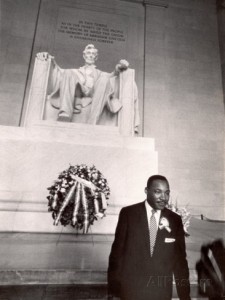 It is an understandable argument. The war’s centenary (1961-1965) coincided with the height of the Civil Rights Movement. Martin Luther King Jr. stood deliberately in front of the Lincoln Memorial in August 1963 when he delivered his famous “I Have a Dream” speech. Under the shadow of the “Great Emancipator”, the symbolic message was clear: racial segregation and subjugation Lincoln’s emancipation should have ended remained prevalent in American society. We are now another half-century on from that moment, yet despite visible changes and progressions, racial tensions remain part of American discourse. As the seminal historian Eric Foner recently stated, the post-war legacy has generated issues that America still faces today. Ferguson can trace its origins back to the Civil Rights era and in turn, the Civil War era too. Selma generated articles and blogs about the film’s Civil War references, stressing that the war’s legacy remains very much alive. There is still no federally funded national museum in the United States dedicated to slavery and race’s relationship to American history.[4] There are also no plans for any sesquicentennial appraisal of Reconstruction, the troubled post-war period. Arguably America’s lack of any official, federally sponsored, nationally-galvanising sesquicentennial events is a result of a continual unwillingness to set foot on the nuanced minefield of the conflict’s legacy.

The Civil War’s 150th anniversary teaches us that history itself matters. The conflict’s foundations stretch from America’s earliest days and its legacy continues to the present. The Washington Post itself has been at the vanguard of scholarly discussion and academic public engagement about the war since the end of 2010 via its online blog “Civil War 150”.[5] The site is a smorgasbord of Civil War delight with a plethora of articles covering the conflict’s social, political, economic, cultural and military aspects. In the sesquicentennial’s early days, “Civil War 150” was recommended as essential reading to anyone interested in learning about the conflict. Now in 2015, it is just one of countless blog sites devoted to the anniversary. Furthermore, numerous Twitter accounts for sesquicentennial events and Civil War organisations have fought the war on a virtual platform over the last few years, with day-to-day commemoration updates. Social media’s recent rise, coinciding with the 150th anniversary itself, has ironically not only continued discussion about the war, but also inadvertently created a saturation of information that will take a long while to fully assess.

It has also become apparent that sesquicentennial is indefinable when appropriated by the anniversary of a conflict. At the start of the First World War centenary in August 2014, commentators fumbled over whether events were commemorations or celebrations. The latter is too jovial considering the subject matter; the former, while appropriate to use in the acknowledgement of past events and the sacrifice of all those who fought, seems too mournful to attach to every anniversary between now and 2018. This also raises the issue of whether we can ever fully commemorate events that happened beyond living historical memory, or whether we merely acknowledge anniversaries. There is also the sense that scholars are forced into readdressing events solely because they reach particular anniversaries, despite continual revisions to historical and American studies subjects. Perhaps the solution is to not have any discussion of the sesquicentennial’s own impact. 2015 is a particularly commemorative year. For example, the battles of Agincourt and Waterloo are also reaching noteworthy milestones. Yet they do not have fancy labels attached to them. Indeed, the official Twitter pages of both events have taken a leaf out of The Washington Post’s Civil War blog. “Agincourt 600” and “Waterloo 200” state precisely what they mean and a far pithier than “Agincourt’s sexcentenary” or “Waterloo’s bicentennial”. Despite moving further away from the present, they are also, in this 21st century historic-speak, immediately understandable.

One wartime scholar I heard speak recently lamented the fact that the last four years have not really seen the explosion of reappraisals and further enhancement between new academic research and public knowledge of the conflict that was perhaps hoped for at the start of the sesquicentennial. However, there remains enthusiasm for Civil War history that goes beyond interest in militaristic aspects. The past four years has seen countless books and articles published on a whole host of Civil War studies. Some may have jumped on a sesquicentennial bandwagon to ensure their works appear at this peak time, but there are new studies waiting in the flanks. The field is flourishing amongst Civil War scholars on both sides of the Atlantic and the impact of cultural, transnational and wider interdisciplinary American Studies approaches opens new doors to enquires that have resonance beyond academia, keeping Civil War studies healthy for many decades to come. April 2015 should not be the final month of Civil War history.[6] 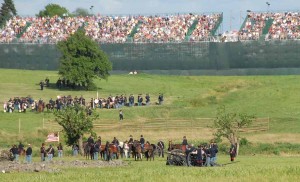 Crowds watch the 150th anniversary re-enactment of the Battle of Gettysburg, July 2013

The fact we are now seven score and twelve years away from the American Civil War should not have any extra significance on its wider study. Events still happened, they are in the past and will continue to be so in another ten, twenty, even fifty years time in 2065 at the end of the war’s bicentennial. It is the job of those who study the conflict to carry on teaching its history, take and learn lessons from it. To paraphrase Abraham Lincoln: “the philosophy of the school room in one generation will be the philosophy” of enthusiasts and Civil War scholars in the next. That should be the legacy of the American Civil War’s sesquicentennial.

[3] “The Lingering Legacy of the Civil War” poll, March 2011, The Washington Post. The Second World War and the American Revolution took first and second place respectively.

[6] A Civil War historian’s quibble here. Technically, the sesquicentennial should end in June 2015 when the last shots were fired. Or 6th November, marking 150 years since the last Confederate surrender. It depends what constitutes the war’s formal end. America’s commemorations of the Civil War have always fixed 9th April, 1865 and General Lee’s surrender at Appomattox as the day and moment when the war official ended and few have ever debated this should change. It is wrong to simply say the war itself ended on 9th April. Interestingly, by using that date, America generated a phenomenon in having commemorations for the start and end of a conflict within the space of a few days of each other on the 12th and 9th April respectively.

Dr Catherine Bateson is a Lecturer and Tutor of American history at Durham University, where she teaches African America, Native America, slavery, political, social and cultural history. She specialises in the history and study of American Civil War song culture, particularly in relation to Irish American Civil War songs and music and their dissemination beyond the Irish American diaspora. She is also the Vice-Chair of the Scottish Association for the Study of America (SASA) and a co-founder of the War Through Other Stuff Society. Follow her on Twitter @catbateson.
View all posts by Catherine Bateson →
Tagged  C19, Civil War.
Bookmark the permalink.