From Millinery to Missionary: The Compelling Contradictions of writer Fanny Forester

This blog series focused on American women writers, a partnership between The Society for the Study of American Women Writers and U.S. Studies Online, explores the field through several lenses that range from recovery to religion and from war to transnationalism. By no means comprehensive in scope, this series of nine posts by SSAWW members offers snapshots into the field and its on-going conversations. In the final post of the series Sean Trainor explores the contradictions in the life and literature of Fanny Forester.

Like many of antebellum America’s best-selling women writers, Fanny Forester[1] has been forgotten by all but a handful of stalwart historians and literary scholars. But in her heyday – a two-year period that began with her dramatic arrival on the literary scene in June of 1844 and concluded with her abrupt renunciation of belles-lettres in the summer of 1846 – Forester was the wunderkind of American literary fiction. Arguably the most popular female author of the 1840s, Forester was hailed by Sarah Josepha Hale, the influential editor of Godey’s Lady’s Book, as “unrivaled among living writers … for vivacity [and] feeling.”[2] And Nathaniel P. Willis, editor of the fashionable Evening Mirror, noted, without exaggeration that, among the magazine’s claims “to the consideration of the public, we rank as not the least our having had the honour to be the first to introduce [Fanny Forester] to author-land.”[3] 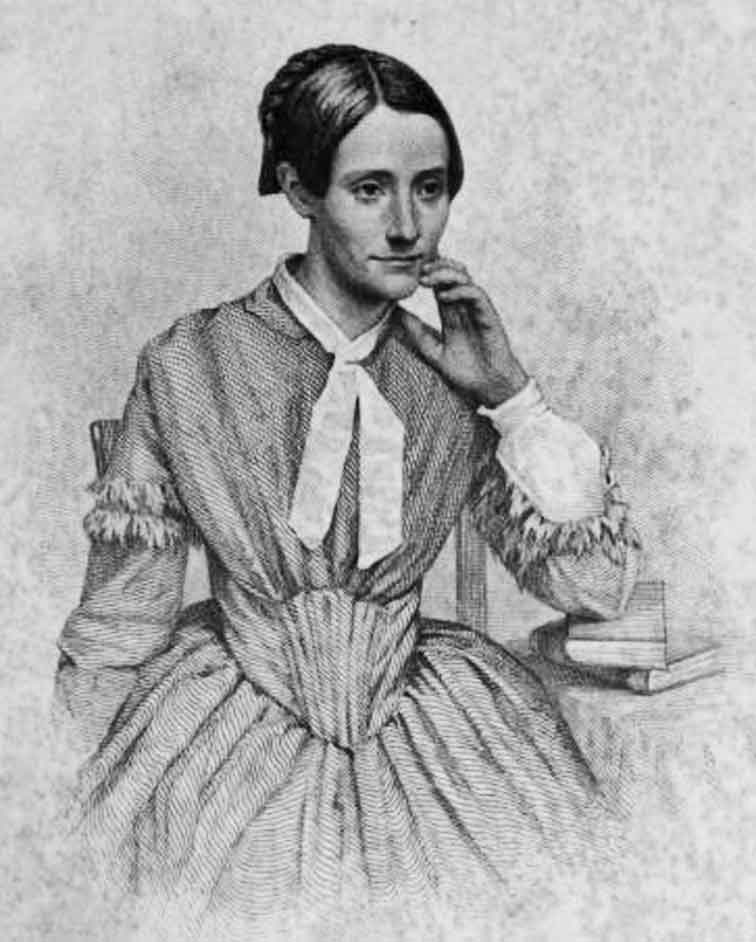 In recent years, however, Forester has suffered the same fate as many of her counterparts in the realm of sentimental fiction. Among the few who remember her, she is typically remembered unkindly. One critic, for instance, unsparingly smeared Forester as “mawkish and lugubrious and as fond of deathbeds, orphans, falling tears and fading flowers as any of her readers.”[4] Another derided her characters as weary concatenations of “Little Eva and Ariel, wandering among dense mists of poetry and totally eschewing any aspect, economic or otherwise, of the real world.”[5]

It is not for me – an historian, of all people – to weigh the aesthetic merits of Forester’s productions. Like the work of Harriet Beecher Stowe and other masters of the sentimental form, I find Forester’s literary outpourings moving in spite of their predictability – by turns witty, trenchant, and heartfelt despite her genre’s tendency toward two-dimensional characterization and tedious didacticism. 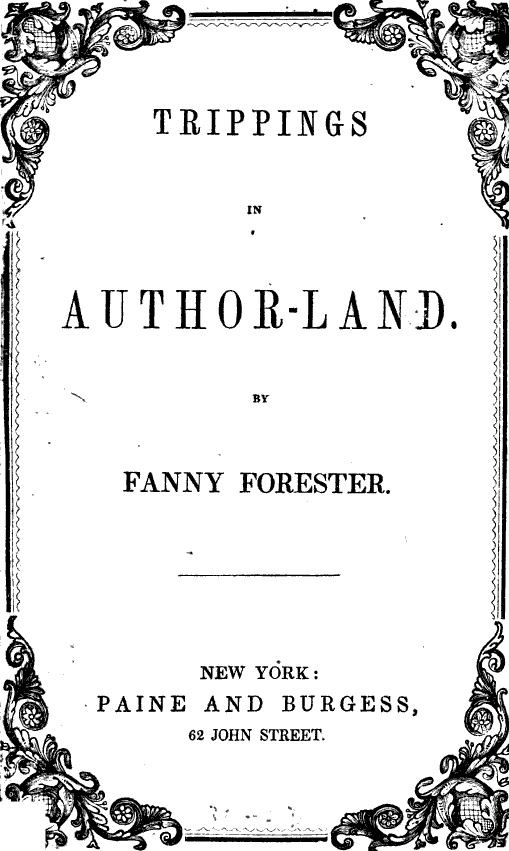 But while critics of differing persuasions might butt heads on the question of Forester’s literary chops, her popularity and influence are beyond dispute. Published in nearly every leading American literary periodical – from Godey’s and Graham’s to the Knickerbocker, Columbian, and Mirror – Forester’s collected short stories went through a whopping nine editions in fewer than four years.[6]

Why did Forester’s work resonate so strongly with American readers? No doubt part of her success stemmed from her admirable mastery of sentimental fiction’s formulas. Her work may have been overstuffed with touching domestic scenes, faultless tubercular maidens, and contrived floral imagery, but it was rendered with a skill and grace that distinguished it from more pedestrian offerings.

More importantly, however, Forester’s life and work spoke to a moral and existential conflict that resonated with many of her middle-class female readers: the tension between fashion and piety – between the iridescent finery of the ton and the more-enduring treasure of life in heaven. 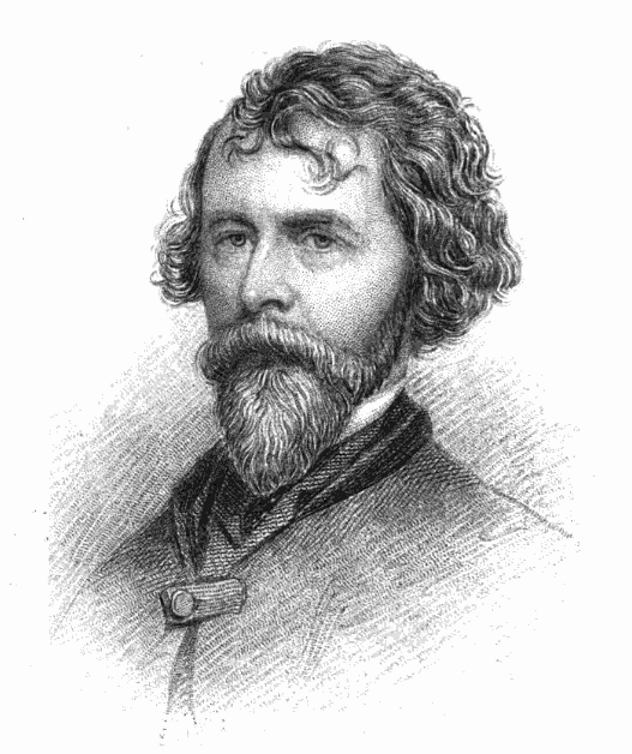 Fanny Forester felt this tension with a unique acuteness. The daughter of a hapless, dithering breadwinner, Forester (born Emily Chubbuck) came of age in poverty. Sent to work in a woolens mill while still an adolescent, Forester turned to fiction in young adulthood as a way to supplement her meager stipend as a school teacher. When finally, after years of wringing mere pennies from her writing, Forester at last hit it big, she embraced the fashionable limelight, not just as a boon to her pride, but as a guarantee of the financial security she had long desired and lacked. “Within the last year,” she wrote to a friend, “I have gained myself a position which others have been all their lives in attaining, and I have a right to be proud of it. You may tell me it is a small thing to be a magazine writer. So it is. But it is not a small thing for a woman, thrown upon her own resources, and standing entirely alone, to be able to command respect from everybody, rising by her own individual efforts above the accidents of fortune.”[7]

She achieved this, moreover, primarily by playing with contemporary ideas about fashion and appearance. In the epistle that made Fanny Forester a household name – published in the Mirror of June 8, 1844 – the young writer told Mirror editor N. P. Willis that, should he be kind enough to patronize her writing, she would use the proceeds to purchase an exquisite work of millinery.[8]

At least one scholar has characterized this letter as an effort by Forester to render her literary ambitions unthreatening – preferring to “disarm her readers and Willis with a false confession of feminine frivolity rather than to expose a need and a determination which would be seen as unfeminine.”[9] Perhaps this is true. But it neglects that Forester’s candid appeal for “one of those charming, head-adorning, complexion-softening, hard-feature subduing Neapolitans” flew in the face of Victorian domestic morality.[10] While writers like Sarah J. Hale and Catherine Beecher regularly maligned ‘fripperies’ and ‘finery’ – imploring women to eschew ostentation in the service of the household budget – Fanny Forester unabashedly declared her desire for a new hat. 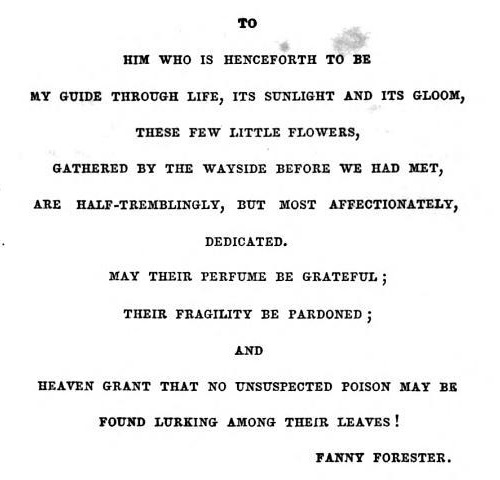 And yet, despite this blunt identification with the world of fashion, Forester was also a devout and pious Baptist. Joining the church, after a long spiritual quest, at the age of seventeen, Forester regularly incorporated Christian themes into her fiction and ultimately abandoned the republic of letters when her new husband – the famed Baptist missionary Adoniram Judson, whom she married in June of 1846 – deemed her literary efforts unworthy of a true Christian woman. As a result, Fanny Forester’s arrival as an author – the 1846 publication of her two-volume short story collection Alderbrook – was simultaneously her swan song. Preceded by a dedication renouncing both her pseudonym and her literary ambitions, Alderbrook, as a reviewer in Graham’s Magazine lamented, had “almost the look of a posthumous work.”[11] As the book raced off the presses, the Judsons sailed east to Adoniram’s missionary posting in Myanmar.

Alderbrook, however, was not the new Mrs. Judson’s final work. In the years to come, she would publish several more nonfiction volumes, including, bizarrely enough, a novelistic biography of Adoniram Judson’s previous wife, who had died only a few years previous. Employing the devices of fiction to enliven tales of the former Mrs. Judson’s piety, The Memoir of Mrs. Sarah B. Judson would serve as a model for later works like Susan Warner’s Wide Wide World that explicitly blended literary formulas with an evangelical mission.[12] And yet, despite its long-lasting influence, The Memoir was far less successful commercially than its author’s efforts as Fanny Forester. Derided by the pious as excessively novelistic, and by fashionable society as drably moralizing, the Memoir failed to strike the precarious balancing act that had once been so essential to her earlier success.

Returning to the United States after Adoniram’s death in 1850, Emily Chubbuck Judson struggled to preserve her deceased husband’s memory and provide for the youngest of his seven surviving children. It was a herculean task. And, before long, it proved her undoing. In 1854, she succumbed to consumption – signs of which had been apparent for years in her glamorously wan complexion and her bright, glittering eyes. Having laid down her life and ambitions on the missionary altar, Fanny Forester faded into eternity like one of her literary heroines – a compelling contradiction to the very end.

[1] Different sources spell Forester’s name with either two or three R’s. Forester’s 1846 short story collection, Trippings in Author-Land, spells the author’s name with only two R’s. I have therefore chosen to do the same here.

[2] For evidence of Forester’s preeminent status among women writers in the 1840s, see Helen Waite Papashvily, All the Happy Endings: A study of the Domestic Novel in America, the Women Who Wrote It, the Women Who Read It, in the Nineteenth Century (New York: Harper & Brothers Publishers, 1956), 47. For the quotation from Sarah J. Hale, see Joan Jacobs Brumberg, Mission for Life (New York: The Free Press, 1980), 127.

Storify of our #bookhour twitter chat on CAPE COD by Henry David Thoreau
Idealist or not? Hamlet 2.0: New Hampshire election results
'The Water-Cure Journal and Herald of Reform': Understanding Hydropathy in Antebellum America

SEAN TRAINOR is a Ph.D. Candidate in History and Women’s Studies at the Pennsylvania State University. He is currently completing a dissertation project on men’s grooming and body care, entitled Groomed for Power: A Cultural Economy of the Male Body in the Nineteenth-Century United States. He blogs at seantrainor.org and tweets at @ess_trainor.
View all posts by Sean Trainor →
Tagged  C19, Gender and Sexuality, Women's Writing.
Bookmark the permalink.