Beyond the Boundaries of Time and Text: Recovering Oral Traditions in American Women’s Writing

This blog series focused on American women writers, a partnership between The Society for the Study of American Women Writers and U.S. Studies Online, explores the field through several lenses that range from recovery to religion and from war to transnationalism. By no means comprehensive in scope, this series of nine posts by SSAWW members offers snapshots into the field and its on-going conversations. The penultimate post in the series, written by Corey Hickner-Johnson, examines recovery through three writers (Margaret Walker, Leslie Marmon Silko, and Kao Kalia Yang) that reclaim their own family and cultural stories and histories. 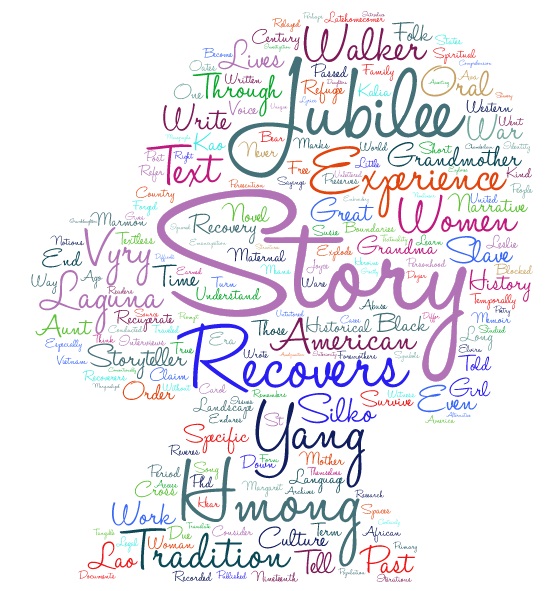 Most of the world’s population, through history, have not been able to “bear witness” for themselves.

In 1965, Margaret Walker published Jubilee, a novel about her great-grandmother’s experience as an African American slave and free woman in the nineteenth century.  In order to write the story, Walker did her research: She went to the archives, earned a PhD, studied historical monographs and legal documents, conducted interviews, and traveled cross-country.  However, Walker’s primary source—her true storyteller—was her maternal grandmother, Elvira Ware Dozier.  Jubilee’s heroine, Vyry, based on Walker’s great-grandmother, Margaret Duggans Ware Brown, was “unlettered and untutored” (486); she never wrote.  And while we cannot read Vyry’s story first hand, we can hear her story, passed down through matrilineal, oral tradition and recorded in Walker’s novel.  In this post, I consider three matrilineal, oral traditions as texts recoverable by their cultural and familial daughters and granddaughters.  Where Margaret Walker recovers her great-grandmother’s story through novel-writing, Leslie Marmon Silko recovers Laguna traditions told by her aunts and grandmothers in Storyteller (1981), an amalgamation of  poetry and short stories, and Kao Kalia Yang recuperates her Hmong-American refugee grandmother’s experience through her memoir, The Latehomecomer (2008).  While these works have many differences, they all translate past matrilineal, oral traditions into written text, claiming important American personhoods and spaces on the page.

Non-written stories prompt investigation into our understanding of recovery work: What is it?  Who it is for?  What does it claim?  And what if there is no tangible text?  Ava Chamberlain explores issues in recovering “textless” women’s lives, asserting that without text, access to these lived experiences are blocked (34).  Certainly, it is difficult to recuperate conventionally textless stories—especially those of historically marginalized women and especially across cultures.  But perhaps, in some cases, these stories are not as blocked as we think they are.  This post takes up the work of matrilineal, literary recoverers—Walker, Silko, and Yang—who recuperate not only the interiority of past women’s lives, but also landscapes, languages, alternative narrative structures, nonlinear temporalities, and ignored histories. 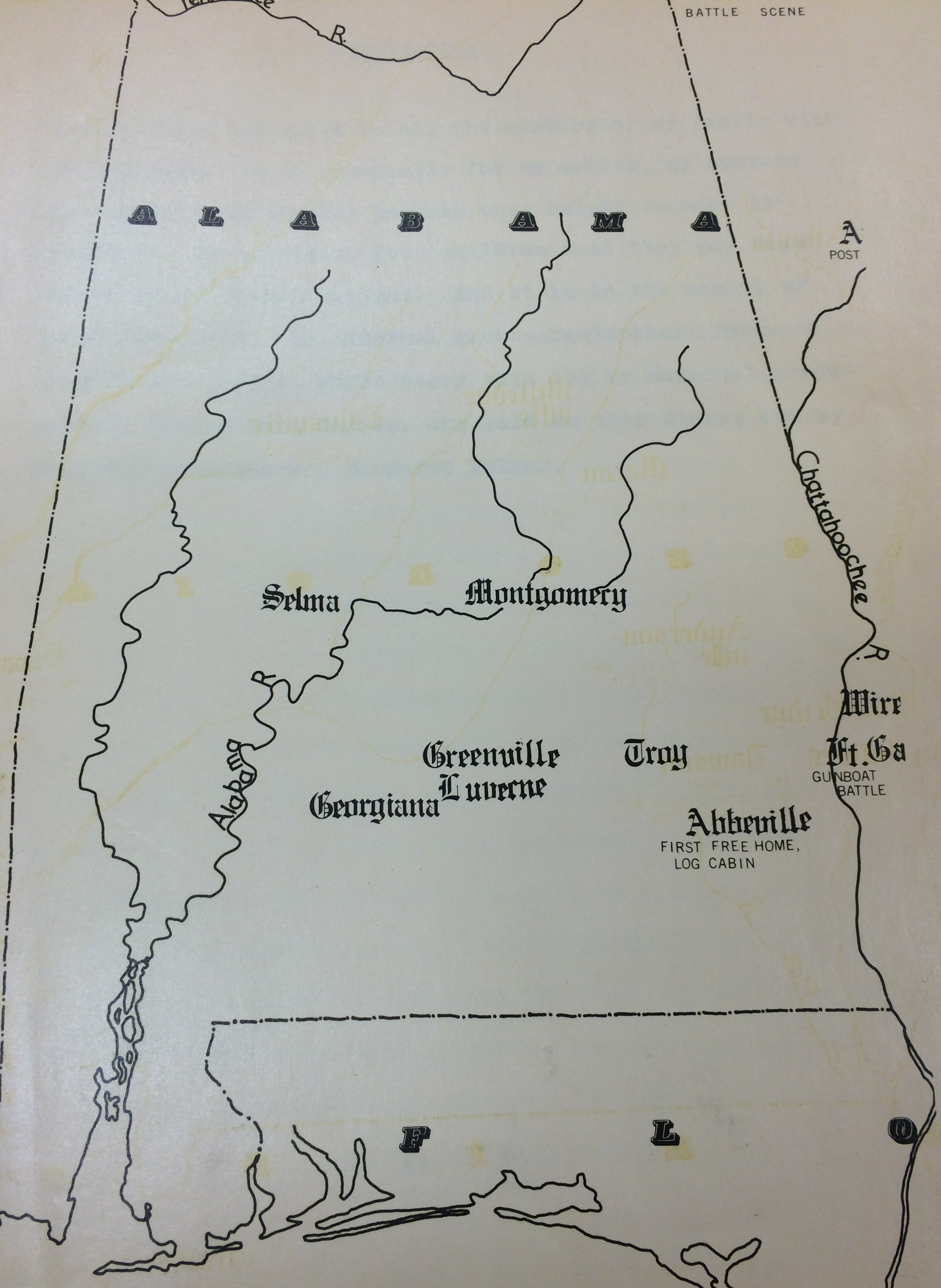 Jubilee gives voice to Walker’s great-grandmother’s experience in and after slavery through folk sayings and songs relayed to Walker through her grandmother.  The song lyrics and folk sayings introduce each chapter, weaving African American slave spirituality, speech and story into one.  Linguistically, Jubilee preserves Vyry’s dialect and folk tradition, while interrupting Anglo-centric iterations of black experience in the nineteenth-century South.  In its very title, Jubilee is interested in trumpeting slave iterations of the period.  While textbooks commonly refer to the period after the Civil War as “Reconstruction,” a term marking events instead of lives, Jubilee refers specifically to the joyful emancipation of slaves, resonating with the traditional black spiritual “Jubilee.”  In this way, Jubilee marks its own, culture-specific historicity as it recovers and celebrates slave emancipation in the present era.

Though Jubilee is celebratory, it also chronicles Vyry’s “spiritual wholeness that had been forged in a crucible of suffering” (486).  Vyry experiences physical and sexual violence, verbal abuse, and sickness due to the poor treatment she endures at the hands of her slavemaster, who is her biological father, and his wife.  Jubilee recovers the sorrow and pain of Vyry’s enslavement and the postbellum racial discrimination she experiences alongside her children and husband(s).  Exhuming a past that some might rather forget, Jubilee calls for acknowledgement, reflection and reverence for slave experience.  At the same time, it remembers Vyry’s strength and kindness—even toward those who abused her. Ultimately, Jubilee recovers and reveres Vyry’s black womanhood and oral history, proclaiming the endurance and value of black American life.

Leslie Marmon Silko recovers stories from her Laguna foremothers in Storyteller. As Silko explains in her introduction and in interviews, even speaking the Laguna language was punishable in her school education.  Still, Silko’s Aunt Alica Marmon Little, Aunt Susie, a Laguna Pueblo Historian, and Great Grandma relayed many stories to her.  Storyteller’s project is one of survival: “Old stories and new stories are essential: They tell us who we are, and they enable us to survive” (xxvi).  In nourishing Laguna survival, Storyteller challenges western notions of story, temporality, and landscape. 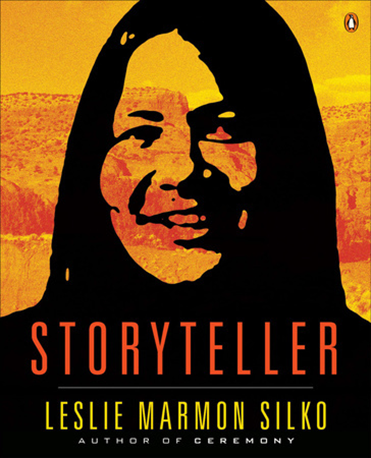 Laguna stories begin with the words “humma-hah,” which means long ago.  This “long ago” does not point to a temporally finite date or era.  Time, in Silko’s stories, runs not by a western clock, but by passages of sundowns, winters, summers, and memories.  Thus, Storyteller’s stories aim not at climax and denouement, but at the communal act of telling of the story in itself.  In “Laguna People,” Silko tells the story of an older girl and her little sister, whom she carries in the traditional Laguna way on her back, and their journey to Maúhuatl, a high mesa, in order to escape a flood.  The girls cannot find their mother, and the story ends as they turn into stone.  The girls become a part of the land, creating the landscape.  Landscape, then, is not a picturesque view, but an embodied experience.  Silko provides a short afterword to the story: “Some of the stories/Aunt Susie told/have this kind of ending./There are no explanations” (40).  Storyteller recovers Laguna inexplicabilities, interrogating of western notions of recovery which seek to contain the past within linear timelines.

Kao Kalia Yang stiches her own narrative as a Hmong refugee from Laos to America with her Grandma’s stories in The Latehomecomer, a memoir.  Yang’s is a recovery of Hmong identity and history.  The Hmong people originally lived in the mountains of China but experienced diaspora into other Asian countries due to persecution.  Persecution became genocide at the end of the Secret War in Laos in 1975, known as the Vietnam War in the United States, when American troops vacated Laos, leaving their Hmong allies behind with the communist Pathet Lao government.  After spending several years in a Thai refugee camp, Yang and her family immigrated to the United States in 1987. 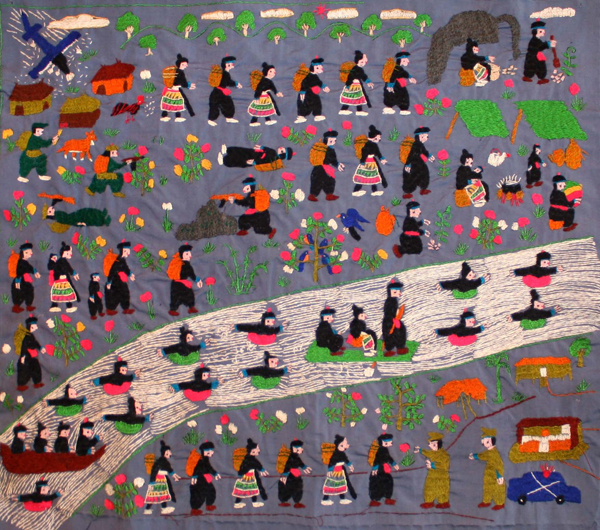 Yang’s account performs critical preservation of Hmong personhood and oral tradition: not only did Yang’s Grandmother  never learn to write, Hmong did not become a written language until 1950.  Even the spoken Hmong language had been outlawed.  However, Hmong women embroidered their stories onto fabric in flowery symbols, passed down through generations.  When Yang’s mother received her own mother’s embroidery, she knew they “were pieces of the history” (17).  The Hmong embroidery imbues visual and touchable narrative, a textuality comprised of Hmong-specific meanings and symbols.  Yang’s paternal grandma, Youa Lee, is her storyteller, a woman who surrendered to North Vietnamese soldiers with a scrap of white cloth tied to a stick.  Through recording her Grandma’s Hmong stories of witches, women-turned-tigers, and villages of split-bamboo homes, Yang traces the lineage of Hmong-American experience and forges a history legible to Hmong and non-Hmong readers.  The Latehomecomer recovers Hmong identity first and foremost, but it also remembers an oft-forgotten atrocity of what mainstream America understands as the Vietnam War.

As Walker, Silko, and Yang demonstrate, recovery work extends well beyond the bounds of Eurocentric texts and narratives.  Recovery, then, recuperates not only text and experience, but cultural specificities and ideologies, spaces and timetables—elements that may not even be comprehensible to cross-cultural readers.  But even if we do not wholly understand, we can learn something.   In order to “explode our long-held assumptions about women’s inner lives” (Tuttle ix), we must listen to a variety of voices and consider unconventional textualities in recovering women writers.