Imagining a Female President: Commander in Chief and the unfinished business of presidential fiction

This blog series was produced through a collaboration between the Society for the History of Women in the Americas (SHAW) and US Studies Online.  The six posts showcase the diversity of research and differing experiences of scholars who are based in the UK but work on women in the US.  The contributors also highlight the challenges facing academics (both those researching transnationally and more generally) as well as the valuable insights that continues to emerge from this cross-disciplinary field. Finally, in the sixth post Gregory Frame considers the recent fictional depiction of a female US president in Commander in Chief and asks whether this television series gives us clues as to why there has yet to be a woman elected into the Oval Office. 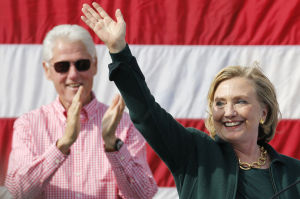 Hillary Rodham Clinton, former First Lady, US senator and Secretary of State, is currently frontrunner for the Democratic nomination to become the next President of the United States in 2016. Although she has not publicly declared an intention to run, she is more popular than she has ever been, having previously been demonised as a dangerous feminist while First Lady and subjected to misogynistic attacks when she ran for president in 2008. Again the United States will ask itself, ‘Are we ready for a woman to be president?’ The question is somewhat absurd, but it speaks of a nation that is overwhelmingly preoccupied with the masculine character of its presidency: in the popular consciousness the president should be, as Robin Lakoff suggested, ‘a daddy, a king, a god, a hero … a champion who will carry that lance and that sword into the field and fight for us’. The president should be the nation’s ‘protector’, a conventionally male position associated with fatherhood, leadership and heroism in battle. This post explores the ways in which the fictional presidency, despite exploring several departures from the white, masculine norm in the past twenty years, has struggled to imagine the possibility that a woman could occupy the role because of the rigidity of the office’s masculine conceptualisation.

From Josiah Bartlet (Martin Sheen) in The West Wing (1999-2006) to James Marshall (Harrison Ford) in Air Force One (1997), the most prominent and popular presidents in film and television have been defined by different conceptualisations of what it is to ‘be a man’. One example that attempted to buck this trend was Commander in Chief (2005-2006) which ran for one season and starred Geena Davis in the lead role, playing President Mackenzie Allen. Allen begins the programme as Vice President of the United States, and an independent not beholden to either of the major parties. She is elevated to the highest office following the death of her predecessor, President Bridges. Allen refuses to step down despite being asked to do so by Bridges on his deathbed (in order to make way for the ruthless Republican Speaker of the House of Representatives, Nathan Templeton [Donald Sutherland]).

As a result of these narrative machinations, Allen has to fight to be seen as a legitimate holder of the presidency. Commander in Chief makes it plain that this question is bound up wither her gender: despite being a former member of Congress, university chancellor and vice president, Templeton, her main rival for the presidency, dismisses her as a ‘schoolteacher’ (a traditionally feminine role), and seriously questions whether a woman would be able to handle the post-9/11 world, particularly in thorny negotiations with Middle Eastern countries who would supposedly be unwilling ‘to follow the edicts of a woman’.

The extent to which Allen remains beholden to the patriarchal establishment, and how she negotiates the legacy bequeathed by her deceased predecessor, is a fundamental aspect of Commander in Chief. At Bridges’ funeral, Templeton’s eulogy concludes with a call to the nation to pray for the new president ‘to answer the clarion call of Teddy Bridges. For it is only through [her] deeds that his genius can be fulfilled for us all.’ Essentially, Templeton demands Allen deny herself any agency in the most powerful position in the world in order to act merely as a breathing cypher for the deceased, male (and therefore legitimate) president. Initially, Allen appears to have a conflicted relationship with this requirement: although she tells her cabinet that the common link between them is the deceased president who brought them together to serve the country, she later announces to the wider public that she will not simply fulfil the legacy of the man she has succeeded, but rather the office she occupies. The irony of this is obvious – although Allen correctly identifies the White House as the symbolic home of American democracy and home to the presidency and not the president, it is a place and a history inextricably linked to traditional conceptions of masculinity.

Indeed, although the White House might appear a space amenable to the competing duties of wife, mother, and President of the United States because it allows domestic and professional duties to be undertaken under one roof, history suggests otherwise. The struggles Hillary Clinton faced when she tried to take the lead on healthcare reform in her husband’s first term were indicative of a culture unwilling to tolerate a woman with such close proximity to political power. Michelle Obama, despite being a Harvard- and Princeton-educated lawyer, elected not to stray too far into the political realm and declared herself to be ‘mom in chief’ when the family moved into the White House in January 2009. In Commander in Chief, Allen is not accepted as a legitimate president by either the political establishment or her own family – her husband rebels against his ‘feminised’, ceremonial position, and her children’s behaviour becomes erratic, struggling academically at school and eating ice-cream for breakfast. Despite exercising the awesome power of the presidency, Commander in Chief is ultimately more preoccupied with the impact this has on Allen’s husband and children rather than imagining in a cohesive and coherent fashion a woman as president. 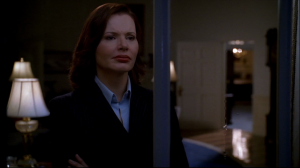 The term ‘postfeminism’ has conflicting implications depending on the political perspective from which it is defined, although Rachel Moseley and Jacinda Read’s (2002) discussion of Ally McBeal is most useful in this regard. They argue that the programme’s exploration of the possibility (and, often, impossibility) of women having successful careers and fulfilling domestic lives addresses a fundamental aspect of the condition of women’s lives as a result of second-wave feminism. In keeping with its inheritance from this tradition, the reconciliation between work and home is often the source of significant tension in Commander in Chief. In the programme, the space of the Oval Office plays a crucial role. In episode five, while dealing with a terrorist threat against an elementary school, Allen’s youngest child, Amy (Jasmine Jessica Anthony), enters to visit her mother, but the president is too busy to attend to her. Later, when Allen discovers her national security team have tortured a terror suspect in direct contravention of her orders, she fires the Attorney General. Allen walks across the Oval Office carpet (which features a giant presidential seal) barefoot, and picks up Amy’s toy gun. Framed in the Oval Office window, Allen is pictured crying [Figure 1]. 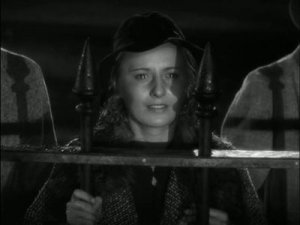 This image echoes the devastating conclusion of Stella Dallas (King Vidor, 1937), in which the eponymous protagonist (Barbara Stanwyck), realising that her continued presence in her daughter Laurel’s life is proving detrimental to her happiness, can only stand in the rain and watch through the window as Laurel marries a wealthy socialite [Figure 2]. Commander in Chief uses a similarly heightened melodramatic register, adapting this familiar image through the perpetuation of a staple of postfeminist television drama: while Allen is inside the building, meaning there is the possibility conflict can be resolved, the emphasis here is on the president’s struggle to fulfil the duties she has to her job and the responsibilities she has to her children. Indeed, in an earlier episode (another that deals with Allen’s moves to protect children), the conclusion has the camera crane up to show a top-down view of the Oval Office with her daughter asleep next to her husband on the sofa [Figure 3]. 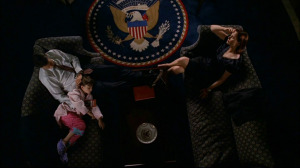 Without a ‘real life’ inspiration from which to draw, Commander in Chief falls back on some fairly well worn tropes of women in positions of power, and the concomitant problems this creates in the domestic sphere. Commander in Chief appears to conclude that having a female president is an unnatural state of affairs, a feeling perhaps confirmed by the fact that its final episode – in which Allen attempted to pass the Equal Rights Amendment – proved to be the programme’s last, and it was cancelled. In essence, the female presidency remains the unfinished business of presidential fiction, and one wonders whether a nation that can’t even sustain an imaginary woman in an imagined White House will be able to elect one in reality.

Gregory Frame is an early career researcher in Film and Television Studies. He was awarded his PhD from the University of Warwick in 2012 and is currently teaching political cinema and television at the University of York. There is a much broader investigation into the dynamics of the female presidency in film and television in a chapter entitled ‘“Having it Allen”: Motherhood, Domesticity and the Female Presidency in Commander in Chief’ in his book The American President in Film and Television: Myth, Politics and Representation (Oxford: Peter Lang, 2014).
View all posts by Greg Frame →
Tagged  C20, C21, Gender and Sexuality, Politics, Popular Culture, Presidents, Television.
Bookmark the permalink.