This blog series focused on American women writers, a partnership between The Society for the Study of American Women Writers and U.S. Studies Online, explores the field through several lenses that range from recovery to religion and from war to transnationalism. By no means comprehensive in scope, this series of nine posts by SSAWW members offers snapshots into the field and its on-going conversations. Shelli Homer and Brianne Jaquette in the fifth and sixth posts of this series introduce readers to American women that write about war. Part one introduced the topic and discussed nonfiction writing. Part two turns to poetry and fiction and includes a bibliography of additional primary and secondary resources.

Read part one of our war literature double header here.

American women poets dealing with the topic of war write with and against the literary trends of their historical moments. Scholarship on war poetry identifies elegy as a dominant form for war poetry. American Women writers, such as Louise Bogan, a poet who rejected modernist experimentation, joined many other writers in traditional pastoral elegiac responses to World War I. The return to a traditional form of pastoral elegy that remembers the fallen soldiers with feelings of lament, praise, and comfort has been cited as disrupting the development of modernist literature (Higonnet). Elegy, however, begins to be challenged by World War I poets due to the specific horrors it was unable to adequately treat (Gilbert). Additionally, a distinctive shift has been identified in war poetry’s purpose following World War I that moves from writing for the dead to writing for the survivors (Goodspeed-Chadwick). American women poets complicate that poetry even further by incorporating issues of race and gender. 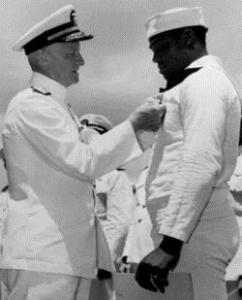 Gwendolyn Brooks’ poems directly question the relationships between black and white American soldiers during World War II. Brooks’ twelve sonnet sequence “Gay Chaps at the Bar” (1945) and her poem “Negro Hero” (1945) are inspired by actual experiences of black soldiers. The sonnet “the white troops had their orders but the Negroes looked like men” describes the confusion caused by attempts from white soldiers to mentally segregate themselves from black soldiers. This sonnet points to the irrational fears surrounding the integration of soldiers during the war, noting that “Neither the earth nor heaven ever trembled./And there was nothing startling in the weather” (lns 13-14). “Negro Hero,” on the other hand, directly confronts racism by white officers in the Navy. Written as a monologue from the perspective of Doris “Dorie” Miller as he steps in to save white soldiers during the attack on Pearl Harbor, the speaker seriously questions whether or not the white soldiers would prefer to die than be saved by a black soldier. Brooks’ use of foreign wars to comment on racial tensions within the United States explores why black soldiers are fighting on behalf of a country that does not recognize them as men.

While Brooks was writing about a contemporary war, other writers, such as Susan Tichy in her collection Bone Pagoda (2007), reflect on foreign wars of the past. Through the use of experimental poetry, Tichy considers the war experience with the experience of writing about war. She brings together her and her husband’s memories from 1968 with their early 2000 visit to Vietnam to explore the various realities of war. The collection is divided into two parts. The first section, “Desk and Chair,” reflects on the difficulty describing the actions involved in war with words, while the second section, the titular “Bone Pagoda,” moves into documenting the war. Her fragmented poems incorporate soldiers, those on the homefront, Vietnamese citizens, and landscape to represent the bleak and long term effects of war. Tichy focuses much of her attention on the brutality of chemical warfare on both the people of Vietnam and the county itself. She also shifts between the powerlessness of the Vietnamese civilians, specifically young women, and arguments used to defend and justify actions during war. Tichy’s interest in the Vietnam War is shared by other women writers who attempt to understand America’s role in the war.

American women writers have authored fiction from the point of view of male soldiers abroad since World War I. Recent fiction about war from American women writers continues that trend with a specific focus on the return home and Post-Traumatic Stress Disorder (PTSD). Roxana Robinson’s novel Sparta (2013) focuses on a veteran, Conrad Farrell, who is adjusting to life after spending four tours in Iraq. Conrad joins the Marines after being inspired by his study of ancient war as a Classics major at Williams College. The book opens with Conrad on a plane returning from his time spent overseas. In this opening scene, although he tries to keep his thoughts focused on his return home, they continually stray to his time in Iraq. Robinson captures the disorientation of reentering American society when Conrad thinks to himself that he was no longer “the person [his parents] were expecting to meet.” Conrad knows, “They wouldn’t want this new person, the one he now was, but he couldn’t remember what that other person was like.” Robinson uses her text to capture the trepidation and anxiety with which a soldier attempts to reenter his life stateside.

The question of the soldier’s relationship with society is also a focus of Morrison’s Home (2012). Similar to many of her other novels, Home, set against the backdrop of the Korean War, looks to the past while reflecting on the present. Much like Brooks’ World War II poems, Home juxtaposes African American soldier Frank Money’s experiences in the Korean War with racial discrimination and violence at home. As the novel unfolds, Morrison shows that Frank’s PTSD results from witnessing his best friends’ gruesome war deaths, his own participation in killing a young Korean girl, and, finally, an event from his childhood where he witnesses the careless burial of a black man in a field by the white men responsible for the man’s death. Morrison’s expansion of PTSD, from experiences abroad as a soldier at war to experiences as a child in the Jim Crow United States, draws attention to the traumatic war-like atrocities occurring on United States soil. Frank’s war traumas cannot be healed by women, a feature of some war literature, like H.D.’s Trilogy (1946); his healing is positioned, instead, as dependent upon his own actions and his ability to accept his moments of helplessness and of responsibility. Robinson’s and Morrison’s novels explore how soldiers recover from the aftermath of war in a society that does not necessarily understand those war traumas.

As evidenced by the above examples, the topic of American women writers and war is larger than might be supposed at first glance. The authors and works detailed above showcase some of the canonical and noncanonical writers who took on war writing. This work should provide some entry points for thinking about the topic of American women writers and foreign wars. American women writers’ responses to war have varied based on their personal experiences of war, their motivations for writing, and the genres they are writing in, but they all attempt to understand the mental and emotional weight of foreign wars on American citizens.

War writing has been, and continues to be, constructed as the domain of men. In order to present a fuller scope of the texts within the category of American women war writers, below the Works Cited is a list of resources not included in this entry. On the list is a range of both creative and critical work.

Carroll, Andrew, and Dana Gioia, eds. Operation Homecoming: Iraq, Afghanistan, and the Home Front, in the Words of U.S. Troops and Their Families. Updated ed. Chicago: University of Chicago Press, 2008.

Goodell, Jess. Shade It Black: Death and after in Iraq. Philadelphia: Casemate Publishers, 2011.

Kieran, David. “‘What Young Men and Women Do When Their Country is Attacked’: Interventionist Discourse and the Rewriting of Violence in Adolescent Literature of the Iraq War.” Children’s Literature Association Quarterly 37.1 (2012): 4-26.

—. Since You Went Away: World War Two Letters  from Women on the Home Front. New York: Oxford University Press, 1991.

Williams, Kayla. Plenty of Time When We Get Home: Love and Recovery in the Aftermath of War. First edition. New York: W.W. Norton & Co, 2014.

Wood, Trish and Bobby Muller. What Was Asked of Us: An Oral History of the Iraq War by the Soldiers Who Fought It. Boston: Back Bay Books, 2007.