The Lady Vanishes: American Women Writers and the Noir Canon

This blog series was produced through a collaboration between the Society for the History of Women in the Americas (SHAW) and US Studies Online.  The six posts showcase the diversity of research and differing experiences of scholars who are based in the UK but work on women in the US.  The contributors also highlight the challenges facing academics (both those researching transnationally and more generally) as well as the valuable insights that continues to emerge from this cross-disciplinary field. From one highly gendered genre to a completely contrasting one, in the fifth post Stefania Ciocia revisits the noir canon.  Dr Ciocia offers a new reading of the gender dynamics in classic films and texts such as Laura.

When we think of American crime writing of the first half of the 20th-century, the usual suspects immediately come to mind: the trail-blazing Dashiell Hammett, the acknowledged master Raymond Chandler and the existentialist James M. Cain. With its dark, urban ambiance, and greater focus on characterization and suspense than on the mechanics of the ‘whodunit’, their hardboiled fiction challenged the conventions of the Golden Age English detective formula in which crime is presented as an aberration – and an intellectual puzzle – in an otherwise well-ordered and understandable world.

One cannot underestimate these three writers’ grip on our collective imagination, since Hammett, Chandler and Cain also form a “triumvirate who shaped Hollywood history” (Hare 3): their literary output has inspired memorable cinematic adaptations, helping to codify the portrayal of archetypal characters in film noir, such as the cynical, and yet fundamentally principled, private eye and the sultry and treacherous femme fatale.  While the characterization of the male protagonist allows for a degree of moral ambiguity, female figures in noir are typically cast either as dangerous temptresses or as virtuous ingénues.

In recent years, several women writers in the hardboiled/thriller tradition of the 1940s have been made available to general readers once again, thanks to the efforts of independent publishers keen to rediscover unjustly neglected female authors. The Feminist Press at CUNY have brought out a whole series called ‘Femmes Fatales: Women Write Pulp’, which numbers several titles by Vera Caspary, including Laura (1943; reissued in 2005), as well as Dorothy B. Hughes’s In a Lonely Place (1947; reissued in 2003). 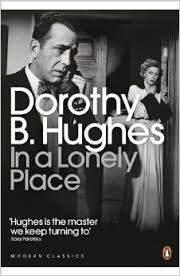 Caspary’s and Hughes’s most famous novels are also in print as a Vintage Classic (2012) and a Penguin Modern Classic (2010) respectively. It is hard not to speculate that the ‘classic’ label might have been bestowed on these texts on the strength of the popular cinematic adaptations which they inspired. The Penguin edition of In a Lonely Place capitalizes on this association, for its cover features a still from Nicholas Ray’s eponymous 1950 film, starring Humphrey Bogart as Dix Steele and Gloria Grahame as Laurel Gray.

Both Laura and In a Lonely Place have been granted canonical status by the Library of Congress as part of the National Film Registry. Their place in film history has undeniably contributed to the preservation and the revival, even if only as source material, of the two novels. The same is perhaps also true of a lesser known novel, Elizabeth Sanxay Holding’s The Blank Wall (1947). Reprinted by Persephone Books in 2003, this “novel of suspense” – as it was advertised by Simon and Schuster – has inspired not one, but two adaptations: The Reckless Moment (1947) and The Deep End (2001). Looking at the original texts against their film versions highlights why their female authors deserve to be rediscovered, as well as why they might have been forgotten in the first place.

In In a Lonely Place, Hughes radically reconfigures the opposition between the femme fatale and the girl-next-door: ostensibly belonging to different worlds, Laurel and Sylvia – notice the shared arboreal connotations of the two names – develop into allies rather than antagonists. In fact, the good wife Sylvia ends up impersonating her more streetwise counterpart in order to trap Dix Steele, the serial killer Laurel has become involved with. The women’s close relationship is accentuated in the film, where Sylvia is cast as Laurel’s confidant. The overall script, though, tells an altogether different story from Hughes’s original. Bogart’s Steele is no murderer, but a frustrated screenwriter whose violent outbursts are the symptoms of his stifled creativity as well as, presumably, of his difficult re-adjustment to civilian life after his war service – a trope common to many movies of the period.

Hughes’s creation, by contrast, is a misogynist serial killer and rapist, convinced that women are “all alike, cheats, liars, whores. Even the pious ones were only waiting for a chance to cheat and lie and whore” (138). Steele idolizes his one-time lover Brucie, who had been genuinely caught up between her love for him, and her duty towards her absent husband (“one of those secret war marriages”, 105). Brucie’s perfection is crystallized by death, for she is Steele’s first victim: the ideal woman, incapable of betrayal, is a dead one. The perversity of this attitude towards women is exposed by Hughes as an insidious pathology, in need of containment. 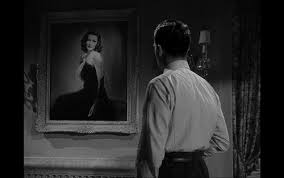 Laura too banks on the allure of the absent/dead woman, idealized in her inaccessibility. The novel illustrates this point through detective Mark McPherson’s obsession with Laura’s portrait – the representation of a woman whom he has never met, believes to have been murdered and is nonetheless falling in love with. On the big screen, the portrait becomes a central, haunting image, since the cinematic medium can convey its visual impact directly, without linguistic mediation. The novel manages to flesh out this mono-dimensional representation of its female protagonist, and indeed of the male hero, mainly because it allows them both to tell their respective side of the story in the first person, and with a degree of self-awareness which leads them to very interesting revelations about themselves.

McPherson admits that, if women are prey to the “romance racket”, men “aren’t much different […] I had wasted a lot of adult time on the strictly twelve-year-old dream of getting back to the old neighbourhood with the world’s championship and Hedy Lamarr beside me on the seat of a five-grand roadster” (107). As the narrative unfolds, McPherson rejects this fantasy and engages with Laura as a real, multifaceted woman. He thus abandons the hardboiled, rudimentary categorization of women as either scheming “dolls” and “dames” or domestic creatures only interested in “parlor suites” (31).

On her part, Laura comes to life neither as an ingénue, nor as a femme fatale. In her section of the narrative, she demystifies her role as the naive protégée to her histrionic mentor Lydecker as “unreal”, “a scene from a Victorian novel” (142). Just as importantly, she realizes that her relationship with Shelby has been mutually exploitative: insubstantial, unfaithful and economically dependent on her, her fiancé would have become her ‘trophy’ husband (129-30). In this way, Caspary construes Laura’s inevitable liaison with McPherson as a match between equals – although, significantly, not in economic terms. Laura clearly has the upper hand there, but has found in Mark a man “bigger than [his] income” (138). 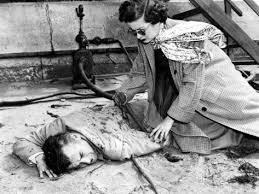 The departure from noir conventions is even more obvious in Elizabeth Sanxay Holding’s The Blank Wall. The novel tells of the lengths a mother will go to in order to protect her family, an atypical choice of subject in a genre whose protagonists tend to eschew both marriage and parenthood. In this case, the threat to Lucia’s world comes from her teenage daughter’s liaison with an unscrupulous lothario, in a plot that leads to manslaughter, blackmail and murder. Paradoxically, Lucia’s strength is depicted as a by-product of her motherly resourcefulness, even as it coexists with her frustration at the drudgery and restrictions of domestic life. Lucia’s stealthy rebellion against social and literary conventions is pushed into the background by her starker, tougher characterization in The Reckless Moment and, conversely, the greater emphasis on female vulnerability in The Deep End. 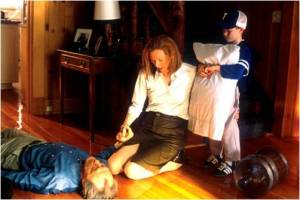 In their best-known – and yet relatively obscure – novels, Hughes, Caspary and Sanxay Holding create nuanced female characters who move in a fundamentally masculine world within the parameters of a fundamentally masculine genre. In all three cases, the adaptations for the big screen somewhat tame the feminist charge of the original texts. This eccentric portrayal of female characters against the traditionally male world of noir may well have been responsible for the marginalization of authors like Hughes, Caspary and Sanxay Holding in the crime canon and its scholarly accounts.

After all, hardboiled fiction is by definition a tough guy’s game, or at least it is conventionally understood to have been so until the 1980s, when Sara Paretsky and Sue Grafton changed the rules with their hardboiled female investigators. Perhaps it is high time that we revisited this (admittedly rather simplified) chronology. In the 1940s, Hughes, Caspary and Sanxay Holding had already started to change the genre, calling to task the misogyny of the tough guys’ world with their complex female characters, who defy noir stereotypes without reneging on their femininity.

Configuring The Dream Factory: Prince Fans and Destabilisation of the Album in the Digital Age
Assassination Nation, Young Female Anger and Futurity in the Wake of Trump’s America
The Un/Incorporated, Continental, Overseas, Global States of America: The Grammar of Jurisdictional ...

Stefania Ciocia is a Reader in Modern and Contemporary Literature at Canterbury Christ Church University. Her article ‘Lost in Cinematic Translation: The “Soft-Boiled” Housewife in The Blank Wall and American Gender Politics after WWII’ will appear in a forthcoming issue of Literature/Film Quarterly.
View all posts by Stefania Ciocia →
Tagged  C20, C21, Gender and Sexuality, Popular Culture, Women's Writing.
Bookmark the permalink.