From National Histories of Advice Discourses to a ‘Transatlantic Domestic Dialogue’

This blog series was produced through a collaboration between the Society for the History of Women in the Americas (SHAW) and US Studies Online. The six posts showcase the diversity of research and differing experiences of scholars who are based in the UK but work on women in the US. The contributors also highlight the challenges facing academics (both those researching transnationally and more generally) as well as the valuable insights that continues to emerge from this cross-disciplinary field.

When I was undertaking research for what eventually became my book Design at Home: Domestic Advice Books in Britain and the USA since 1945 (Routledge, 2013) I was struck by the way in which some of the material I read focussed exclusively on the US to the extent that inaccurate generalisations were made about the periodization and content of the domestic advice genre. To assert, for example, that books of domestic advice originated in the 1830s was to ignore the European origins of the domestic advice genre and several centuries of writing and publishing activity in that genre before it developed in the US. This was not my first taste of the US-centrism associated with the American exceptionalism that has now been effectively challenged and deconstructed, but it was the most perplexing because it was so closely related to my research. 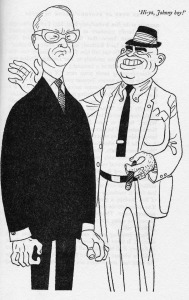 An American, as represented in a humorous advice book by a British aristocrat: ‘Hi-ya, Johnny boy!’ illustration by Nicolas Bentley, in The Duke of Bedford’s Book of Snobs, John, Duke of Bedford in collaboration with George Miles, London: Peter Owen, 1965, p. 51.

This exclusionary focus was useful too, because my dissatisfaction with the single-nation emphasis that produced this erroneous assertion led me to reflect on the national, international and transnational paradigms I employed in my own research and writing about domestic advice books.  It led me, too, to read work concerned with the ‘transnational turn’ in American Studies and beyond, which has been lucidly reviewed in recent edited volumes such as Brian T. Edwards and Dilip Parameshwar Gaonkar’s Globalizing American Studies (University of Chicago Press, 2010), Winifried Fluck, Donald E. Pease and John Carlos Rowe’s Re-Framing the Transnational Turn in American Studies (Dartmouth College Press, 2011) and Laura Bieger, Ramón Saldívar and Johannes Voelz’s The Imaginary and Its Worlds: American Studies after the Transnational Turn (Dartmouth College Press, 2013). While some authors have continued to focus on the US to the exclusion of other nation states, I joined those advocates of the transnational turn and refused to produce a single-nation study. I was interested in the domestic advice books which formed my primary source material whether they were published in the US or in the UK. I saw a fruitful dialogue between the domestic advice discourses of the two countries, which was not surprising given the development of writing on domestic advice in the US.

Arthur M. Schlesinger Snr.’s account of the development of American etiquette, Learning How to Behave (1946), states that US settlers brought advice books with them, principally from Britain and France.  These titles were then printed and published in the US, before being adapted to better suit the US situation, a process which eventually resulted in the publication of home grown (north) American advice. Schlesinger is too subtle to posit a complete break with the past in US advice sources, however, and closes his 1946 book by proposing enhanced attention to etiquette as a tool in and for international relations. Schlesinger’s approach to American advice is therefore related to transnational studies of advice such as those by sociologists Norbert Elias ([1939] 1994) and Cas Wouters (2007), and historian Linda Young (2003). The pattern of influence Schlesinger outlines is seen in the material from my period (1945 to the present) as Anglocentric models have ceded to US-originated advice such as Martha Stewart’s Omnimedia. 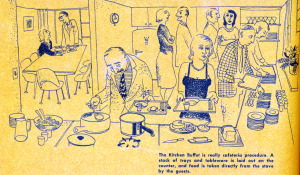 Reading advice about the home, from guidance on social interaction found in etiquette books, to the homemaking and home decoration books concerned with the home as materially constructed, I discerned more convergence than divergence between US and UK sources.  As a result, the notion of a transatlantic domestic dialogue began to take shape in my research and to offer a more cogent model for understanding the development of domestic advice than those in which culture was determined and demarcated by geographical and political national borders.  I saw linguistic variations in the idiomatic English used by US and UK writers respectively. I saw a greater emphasis on thrift and tradition in UK sources of the post-WW2 period than in the expansive and optimistic US books of the same period. But more than that I saw domestic advice as a markedly intertextual discourse; advice books sometimes contain direct quotations from other writers (chiefly Emily Post), and bibliographies recommending other advice titles for further reading, but they also rely on precedent to the extent that each new title provides advice which is only incrementally distinct from that which has gone before. These intertextual characteristics inform my proposal of a dialogue as a useful way of understand the relationship between UK and US discourses of domesticity.

The expanded field of analysis that resulted from my identification of a dialogue played out on the pages of domestic advice books was not convenient. It meant that I had to read a lot more domestic advice books, for a start. My reading was facilitated by my own transatlantic status: as an English design historian married to a US design historian, I have travelled between the UK and the US regularly for the past 15 years, and have conducted my research in various UK and US universities and research libraries as a result. With increasing digitisation programmes, archival research need not be conducted in archives on the other side of the Atlantic. And, because my focal sources were in fact published books, I easily and cheaply amassed a personal library of UK and US domestic advice books from across the twentieth century.

Notwithstanding the transnational turn in American Studies, the transatlantic focus of my own study meant that I had to work harder in some academic contexts to justify my methodology than I would have needed to had I adopted a more conventional national unit of study. I needed to be clear at each point in my book about whether my comments related principally to the UK, the US or both nations. When my analysis veered more towards the US (for example, when talking about the development of home economics) or the UK (for instance, when examining the waning of aristocratic influence in domestic advice discourses) I needed to explicitly state that this was the case, and explain why. In this sense, my study is not a properly comparative one in that it does not continuously compare one nation with another, providing the UK and US case in relation to every question asked or topic broached. Rather it is transnational in that it takes as its focal unit of analysis a region which extends beyond that of one nation, to two nations, and considers the relationship between those nations as exemplified in the material study, namely domestic advice books. 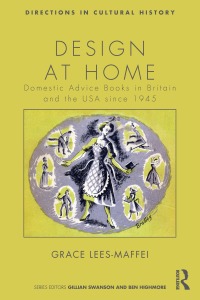 Cover, Design at Home: Domestic Advice Books in Britain and the USA since 1945, Grace Lees-Maffei (Routledge 2013) showing cover detail from The Art of Being a Woman by Amabel Williams-Ellis, published by The Bodley Head, London, 1951.

Only readers (and reviewers) of my book can judge whether I have handled my transatlantic field adequately and whether my reading of a transatlantic domestic dialogue is useful in understanding the development of domestic advice since 1945. In the meantime, I remain committed to a transnational field of study, as shown in my work on the reception of Italian design in the UK. I am currently co-editing a book on the place of national histories of design in an age of increasing globalization, to which I will contribute a chapter of my own on the transatlantic domestic dialogue, and working with colleagues internationally to develop an integrated approach to the history of European design. I am clear that the expanded field of American Studies which acknowledges the range of nation states implied in the term ‘America’ and which examines the US in the wider world will present a richer understanding of the particularities of the US, and its relationships with other nations and nation states.

Our Latest Longest War: Losing Hearts and Minds in Afghanistan
‘Unbelievable Originality’: Lining Tracks and Performativity in Zora Neale Hurston’s Folk Concerts
Clinton's Ghost: Bill's Foreign Policy and What It Tells Us About a Hillary Presidency