Book Review: Rethinking the 1950s: How Anticommunism and the Cold War Made America Liberal by Jennifer A. Delton 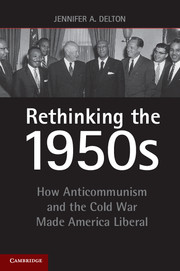 Because Dwight Eisenhower was the only Republican President between 1933 and 1969, it is naturally tempting to argue that his eight-year tenure in the White House (1953-1961) was a more conservative period compared to his Democratic predecessors and successors. In fact, in their books Nightmare in Red (1990), America in Our Time (1976) and A Cross of Iron (1999), the historians Richard Fried, Godfrey Hodgson and Michael Hogan have all advanced this case; for them, Eisenhower and his contemporaries successfully used the anti-communist hysteria created by the Cold War to force New Deal liberalism into retreat, thereby establishing a more conservative climate in the 1950s.

Jennifer Delton’s impressive and thoroughly researched study sheds new light on that argument, however. For Delton, the Eisenhower years were actually “an era of liberal ascendancy” [p. 10]. Central to her argument is the idea that Cold War anticommunism did not, as previous scholars have argued, force liberalism onto the back foot during the 1950s. On the contrary, it actually gave liberalism an impetus because it necessitated a far more active role for the state, which the Right had no choice but to accept.

As a result, liberal policies were endorsed and enacted by the President, the Republican 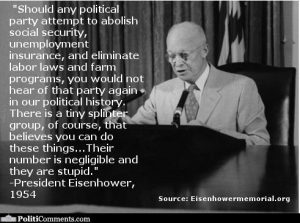 Party, and other conservative groups throughout the 1950s. Many of the Party’s southern congressmen, for example, decided to support Military Keynesianism [pp. 94 – 95], whilst moderate Republicans – who recognised the hypocrisy of promoting freedom abroad when discrimination existed at home – campaigned for civil rights legislation [pp. 38 – 56]. Eisenhower oversaw the desegregation of the military and appointed anti-segregationist judges to the federal courts [pp. 117 – 120]. He also authorised the interstate highway programme [pp. 123 – 127], expanded unemployment insurance, social security, and welfare and housing provision [pp. 127 – 132], and made use of deficit spending [pp. 132 – 137]. Additionally, the business community increased wages for low-income workers, invested in manpower training programmes, and supported trade union expansion, all out of belief that such measures would help the United States win the Cold War [pp. 56 – 78].

Thus, far from having a negative impact on the post-war ascendancy of New Deal liberalism, the breakdown of American-Soviet relations actually precipitated the expansion of the liberal state during the 1950s. This, according to Delton, validates the argument that a post-war consensus existed in America. And, for her, that consensus was far more liberal than historians have thus far recognised or admitted. Rethinking the 1950s, then, robustly challenges the standard narrative of that decade and Delton’s argument must be taken seriously, not least because it is advanced in such a cogent manner. Still, there are certain problems with her book.

Firstly, Delton devotes either little or no attention to refuting key points and arguments which suggest that the 1950s were conservative. For instance, there is hardly any discussion of Eisenhower’s refusal to actively stimulate recovery during the recession of 1957-58 (out of fear that this would significantly unbalance the budget), for which he was heavily criticised by numerous liberal economists. Additionally, Delton completely ignores the legacy that the 1947 Taft-Hartley Act had for organised labour during the 1950s, especially in the South and the South-West. Indeed, as the historian Elizabeth Tandy Shermer has demonstrated in her various publications,[1] the restrictions placed upon labour rights following Taft-Hartley ensured that the 1950s were anything but liberal for the labour movement in the Sunbelt. 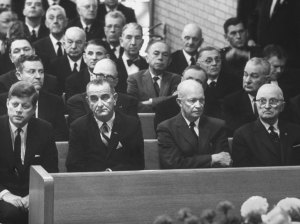 Secondly, seen in the context of the broader post-war liberal moment, some of the policies enacted by Eisenhower that Delton regards as liberal do not actually appear that liberal at all. For instance, Eisenhower’s civil rights record pales in comparison to the records of Truman, Kennedy and Johnson, as he refused to use the powers of his office to enact far-reaching reforms. Furthermore, unlike his Democratic predecessors and successors, Ike also did very little to tackle the huge amount of economic inequality that beset America during his presidency. Hence, Delton does not convincingly demonstrate that the 1950s can, in relative terms, be considered just as liberal as the 1940s and the 1960s, despite showing that Eisenhower did advance certain liberal goals.

Delton could also have deepened her analysis by exploring how her portrayal of Eisenhower as a liberal president is significant in terms of the historiography on his presidency. Since the 1970s, Eisenhower has generally been portrayed as a moderate Republican who was a very successful president. Yet despite redefining him as a liberal, Delton leaves unsaid whether or not she thinks he was a good president. This is surprising as it would have enriched her level of analysis and provided another interesting twist to the Eisenhower historiography.

Overall, Rethinking the 1950s is a very enjoyable, accessible and interesting read, and the way Delton brings together and engages with the existing historiographical debates about that decade is admirable. Moreover, Delton’s book does make a strong case for the 1950s being less conservative than the existing scholarship would have us believe. It also suggests that historians have perhaps underestimated the extent to which the Republican Party helped pave the way for the liberal reforms implemented by the Democrats during the 1960s. Thus, despite its limitations, Rethinking the 1950s certainly lives up to its title. It will, therefore, be an important text for anyone interested in the post-war political history of the United States.

Review: Lives Outside the Lines: Gender and Genre in the Americas
Review: The IAAS Postgraduate Symposium “Parallel Lives in America” (Online)
Book Review: An Intimate Economy by Alexandra J. Finley

James is a PhD candidate at the Institute of the Americas, University College London. He is researching the career of former Kennedy-Johnson CEA chairman Walter W. Heller, which he plans to use as a lens onto the rise, ascendancy and eclipse of Keynesian political economy in the United States. He holds a BA in Modern History from Queen Mary, University of London and an MA in United States Studies from UCL.
View all posts by James Hillyer →
Tagged  C20, Civil Rights, Cold War, Politics, Presidents.
Bookmark the permalink.