Deconstructing ‘Uncle Tom’ Abroad: The Case of an American President 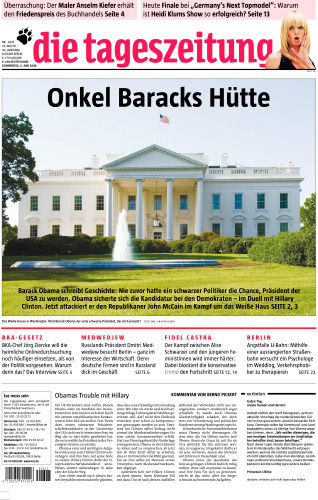 In 2008, when Barack Obama was selected as the Democratic presidential candidate over Hilary Clinton, a German leftist newspaper headlined an article ‘Onkel Barack’s Hütte’ – ‘Uncle Barack’s Cabin’ – accompanied by a picture of the White House (see Figure 1).  This witticism was based on an historical allusion to Uncle Tom’s Cabin; or, Life Among the Lowly (1852), by Harriet Beecher Stowe – a nineteenth-century antislavery novel and popular culture phenomenon.  Following the story of Uncle Tom, an African American slave sold by his master to settle debts, the novel unapologetically brought the controversial issue of slavery to the forefront of the American psyche.  The character of Uncle Tom experiences the benevolent paternalism and cruel exploitation of chattel slavery, and eventually dies at the hands of a malicious master.  What does it mean for a twenty-first century presidential candidate, who became the 44th President of the United States, to be described in such terms?  The rhetorical implications of this epithet demonstrate how media and popular culture shape ideas about history, race, and politics, even beyond the United States.

A tension exists between the use of such epithets and the enthusiasm with which the first African American president was greeted in the United States and internationally.  And yet this belies the historical significance of Uncle Tom’s Cabin and its ongoing ability to shape discourses about American race relations.  ‘Uncle Tom’ has been understood as a pejorative term since the mid-twentieth century.  Die Tageszeitung’s article has been described as ‘satirical’, but the historical meaning of ‘Uncle Tom’ is so racially loaded that it cannot be so easily relegated to the realm of satire.[i]  Martin Luther King, Jr., Clarence Thomas, and Colin Powell have likewise been referred to as ‘Uncle Tom’, and so this has become ‘the standard epithet for any black man who serves whites and does not carry a gun.’[ii]  When Palestinian journalist Abdel Bari Atwan repeated the ‘Uncle Tom’ epithet to describe Obama in 2013, he chose not to attack a policy or political statement, but to denounce the president with an offensive racial slur.[iii]

It is therefore worth considering why the ‘Uncle Tom’ epithet has, in recent years, been mobilised internationally.  The answer can be found in Uncle Tom’s Cabin itself, a novel which exemplified the possibilities surrounding nineteenth-century mass culture.

Uncle Tom’s Cabin emerged at the height of the antislavery movement and had profound impact on American society.  It was first serialised in The National Era from June 1851, the subscriptions of which spiked from 17,000 to 28,000 over the course of its 40 week run.  When published as a novel in 1852, over 300,000 copies were initially sold; since then, over 200 editions of the novel have been printed.  When President Abraham Lincoln met Harriet Beecher Stowe, he is rumoured to have said, ‘So you’re the little woman who wrote the book that made this great war!’  This anecdote encapsulates the influence of Stowe’s narrative in nineteenth-century America.[iv] 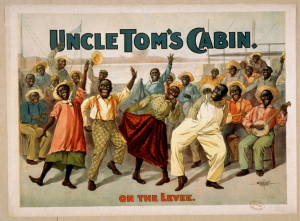 Subsequently the novel became one of the first examples of the mass circulation of popular culture.  Its various adaptations, including children’s pedagogical texts, songs, and sheet music, were soon distributed both nationally and internationally.  Uncle Tom’s Cabin instigated a new approach to merchandising souvenirs, from toy figurines to candles, based upon the story’s leading characters.[v]  These translations mythologised key scenes and characters from the original novel, bringing them to mass audiences in the United States, then England, and by 1853 in Europe and beyond.  Following the Civil War, blackface minstrelsy theatrical companies toured the United States and throughout the world, including Australia.[vi] 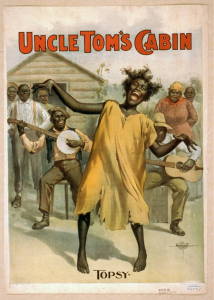 From the outset, the circulation of Uncle Tom’s Cabin meant it became a lens through which race in America was understood internationally.  Stowe may have been the ‘head of the school’ of the ‘literature of social change’, but, much like her abolitionist contemporaries, she perpetuated ideas about black inferiority.[vii]  Yet unlike her contemporaries, Stowe gained a much wider platform upon which to disseminate negative racial stereotypes (see Figure 2).  Historians describe how Stowe relied on stereotypes to depict her African American characters: Uncle Tom was the faithful and martyred slave; Eliza and Cassie were ‘tragic mulattas’; Topsy, an enslaved child, represented the ‘coon’ stereotype (see Figure 3); Aunt Chloe and Dinah were the embodiment of the mammy archetype; and Sambo and Quimbo were depicted in terms of the ‘brutal black buck’, or the depraved and over-sexualised African male.[viii]  Ever since, references to ‘Uncle Tom’ have implied a gentle, forgiving, and passive individual; in short, not the makings of an American president.

The popularity of the novel continued long after the Civil War.  The novel’s already problematic representation of race proliferated in the nineteenth-century adaptations that relied on blackface minstrelsy, and the narrative sometimes underwent so much alteration that its original antislavery themes became obfuscated.[ix]  It later became one of the most frequently filmed stories of the silent film era.  Early adaptations cast white actors in burnt-cork blackface to portray the enslaved, but with the decline of blackface minstrelsy, later adaptations cast African American actors.  Its continued influence was accompanied by ever-changing narrative meanings, which did not always have a clear antislavery message.  More recent adaptations include the German language film Onkel Toms Hütte (1965) – which gives specific context for the 2008 Die Tageszeitung reference – and a lacklustre American television series of 1987.  Many such adaptations have been criticised for ‘Tomming’, wherein black characters remain subservient to white characters, thus appealing to the ‘repressions and fantasies’ associated with a vision of racial hierarchy and race relations that continues in contemporary America.[x]

For Jim O’Loughlin, Uncle Tom’s Cabin is a popular artefact through which changing concerns about race and nationhood can be understood, because it served as an ‘agent of cultural change for almost one hundred years.’[xi]  Since this novel and its adaptations became one of the early examples for the mass circulation of popular culture, this is almost as true internationally as it is in the United States.  But the process whereby Uncle Tom’s Cabin was brought to international audiences meant its racist stereotypes were not necessarily accompanied by the original novel’s redeeming feature – its antislavery message.  The international cultural memory of American history presented in Uncle Tom’s Cabin continues to rely on such stereotypes, which are damaging because of their clichéd contemporary familiarity.

A sense of disconnect therefore exists between the historical evaluation of Uncle Tom’s Cabin and the contemporary willingness to use ‘Uncle Tom’ as a politicised rhetorical device.  A historical lens enables readers to at once understand the novel as a flawed product of its time and an important agent of social change.  Stowe’s personal commitment to antislavery went hand in hand with the dissemination of racist stereotypes that were nonetheless common in nineteenth-century America, but the contemporary reiteration of such stereotypes in America and abroad is not an innocuous mistake.  History is intrinsic to making any meaning of the phrase ‘Uncle Tom’, so those who mobilise it understand its racist legacy.  This does not overlook the historical foundations of such epithets, but in fact shows a willingness to mobilise a history of chattel slavery and racial hierarchy for political gain.

As David S. Reynolds writes, ‘We may hope for a time when America is, in President Barack Obama’s phrase, “beyond race,” when we can erase the negative usage of Uncle Tom because it is inapplicable to social reality.’  Yet Obama himself perhaps most prominently continues to experience the legacy of nineteenth-century popular culture in a way that debunks the myth of a post-racial America.  The recent Sony hacks, where executives speculated over whether Obama would like films such as Django Unchained (2012) and 12 Years a Slave (2013), the latter based on Solomon Northup’s 1853 slave narrative of the same name, show how history and popular culture are very much linked to the expression of racism in America.[xii]  The Uncle Tom’s Cabin phenomenon, the success of which was intrinsically linked to the expansion of mass culture across the nineteenth and twentieth centuries, demonstrates the degree to which national prejudices can be naturalised, rather than critiqued, through international circulation.  When transported beyond the United States, the racism within American popular culture has subsequently been used to undermine a president beyond American borders.  Uncle Tom’s Cabin remains at the locus of the referential network upon which this political rhetoric continues to be built.

From National Histories of Advice Discourses to a ‘Transatlantic Domestic Dialogue’
Conference Review: 'Protest: Resistance and Dissent in America'
"Born in the USA": Birtherism and the US Presidency

Ana Stevenson is a Postdoctoral Research Fellow in the International Studies Group at the University of the Free State, South Africa. Her research interests include women’s history, transnational women’s suffrage, and the development of feminist rhetoric in social movements. Between 2014 and 2015, she was a Visiting Scholar in the Gender, Sexuality, and Women’s Studies Program at the University of Pittsburgh. Ana is part of the Lilith Editorial Collective, which produces the Australian Women’s History Network’s Lilith: A Feminist History Journal.
View all posts by Ana Stevenson →
Tagged  Black History, C19, C21, Cultural History, Obama, Presidents, Slavery.
Bookmark the permalink.