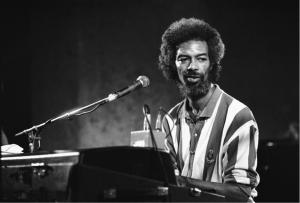 On October 15, 1973 legendary poet, spoken word artist, musician, and self-proclaimed ‘Bluesologist,’ Gil Scott-Heron recorded one of his most famous spoken word pieces “H2Ogate Blues.” In this poem, Scott-Heron humorously unpacks the Watergate Scandal to explain to people “outside the Beltway” what is going on in Washington.[i] He performed it live at the D&B Sound Studio in Silver Spring, Maryland and it is now available to us as a record from that performance on Scott-Heron’s album Winter in America (1974).[ii] However, this album, which is his most popular and critically acclaimed work, stands out in one way: track 8 or “H2Ogate Blues” is not a simple recording of his recitation of the poem. Though there are a few tracks with an audible audience clapping along, this particular track features a sly trick that plays with the ideas of ephemeral, live performance and recorded, reproducible artefact. This sly trick, I term it ‘meta-performance,’ refers to a performance that is initially recorded and then played again for a second audience; the final recorded version is a record of the second iteration, not the first one, to include the reaction of the second audience. I argue that this unique piece of artistic ingenuity showcases the power of the ephemeral nature of unrecorded performance, which, paradoxically, operates in harmony, not competition, with the permanent record of that same performance (an album in this case)–usually the ephemerality of a live performance gives way to an imitation of that ephemerality for mass production or to secure its longevity.

For performance scholar Lesley Wheeler, “print exchanges presence for longevity, voice for script”[iii] but by including the audience reaction to an already recorded performance for “H2Ogate Blues,” Scott-Heron manages to pay tribute to the longevity of art through a permanent record while simultaneously honouring the presence of the poet in the original performance by putting him in dialogue with a second audience, which interestingly turns out to be himself. He refuses to substitute the importance of orality and performance that permeated alternative artistic cultures in the 1960s and 1970s,[iv] especially the Beat Generation, the Black Arts Movement and the Nuyorican Movement, for the textual condition that has brought artistic expression to the forefront of our everyday lives since the advent of writing and then printing.

Before I take a closer look at the poem itself, I should describe the setting and space in which this piece came about as it directly shapes the process by which the poem was created. In The Last Holiday: A Memoir (2012), Scott-Heron describes the peculiarities of the D&B Sound Studio: though small, Scott-Heron remembers that the space offered a “comfortable feeling.”[v] This comes through on the album in a few tracks where we hear some clapping that makes it clear that this was a small studio with a private, intimate audience made up of friends, the production team, and the musicians. Furthermore, the size meant that when either Brian Jackson, who co-wrote many songs, or Scott-Heron did vocals, the other person “had to go out in the hallway where the water cooler was located.”[vi] Without the technical equipment of a sound studio and the safe space of fellow friends and musicians, Scott-Heron would certainly not have been able to pull off his stunt. Scott-Heron truly understood the importance of space for a performer and while space influences the creation of all artistic works, it particularly takes centre-stage in a performance­; it has the capacity to greatly limit or break down the boundaries of what the performer can achieve. 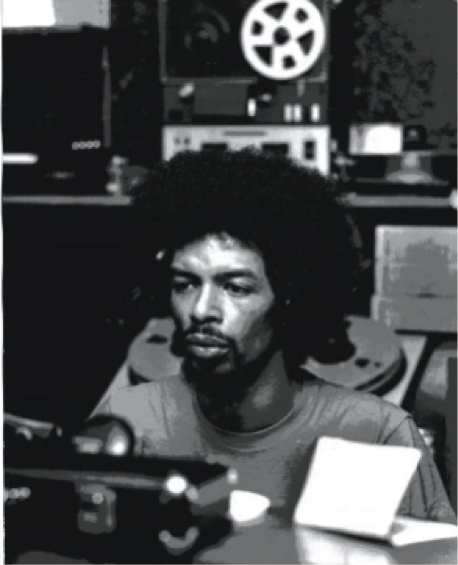 In his memoir, Scott-Heron also mentions that the poem was not even supposed to be on the record but his drummer Bob Adams convinced him despite the fact that Scott-Heron was not sure people outside of Washington D.C. would understand all the references in the poem.[vii] In a nod to the blues tradition that emphasizes improvisation, he “set up to do one take, a ‘live ad-lib’ to a blues backing.”[viii] Turning the nod into a bow, he also added an introduction on the blues, which he came up with on the fly, reminiscent of Howlin’ Wolf’s famous preface on blues in 1951. In this introduction, he matter-of-factly explains how “there are six cardinal colors: yellow, red, orange, green, blue, and purple / and there are 3000 shades […] meaning that there are at least 500 shades of The Blues.”[ix] Blues scholar Tony Bolden points out the central role of blues in the African American tradition, “to be privy to a performance of the blues network is to claim witness to a dialogue of creative recipes that culminates in a veritable gumbo of art.”[x] Honouring blues in the way that he does not only certifies him as a ‘Bluesologist,’ it also demonstrates how this fundamental black cultural expression serves not simply as a genre of the early 20th century but truly shapes, connects to, or branches out into popular and influential genres such as jazz, soul, spoken word, hip hop, rock n’ roll, and slam poetry.

I already mentioned that this poem came about in one single take and this becomes clear on the recording when Scott-Heron repeats a stanza because he misses the rhymes, screws up the rhythm, and says the wrong words. The correct stanza goes as follows: “Just how blind will America be? The world is on the edge of its seat / Defeat on the horizon, very surprisin’ / That we all could see the plot / And claimed that we could not.” In his first attempt, he messes up the last line and instead says “And still could not,” forgetting the action word “claimed.” More important, however, is the fact that he does not accentuate the rhymes “seat” and “defeat” or “horizon” and “surprising.’” Instead, he speeds through the second and third line, which clearly destroys the natural rhythm of the stanza, making it sound less like the progenitor of slam poetry and more like an amateur rushing through all the stresses.

Nonetheless, the first attempt stays on the album and Scott-Heron deserves credit for keeping it like that. In the studio he had the opportunity to edit the mistake or record a new version. By not doing this, however, he highlights a unique aspect of a performed poem: if you make a mistake live in front of an audience, that mistake cannot be undone. You cannot edit live sound. As Walter Ong, scholar on oral cultures, says, “sound exists only when it is going out of existence.”[xi] As such, you cannot go back to a spoken or sounded word—unless recorded—and remove it as you could with a written word. Though the idea of permanence might apply to printed words much easier, there is a lot of power and permanence in the spoken word. According to Fahamisha P. Brown, whose work focuses on African American vernacular traditions in poetry, African and African American cultures value the spoken word and hold speakers accountable for what they say as the spoken word “causes action.”[xii] Scott-Heron could have edited the first attempt out of the recording but by leaving it on the album, the permanent record of the performance, he honours the format of the live performance[xiii] and the black cultural tradition that values the spoken word. He made a mistake by messing up the natural rhyme and rhythm of the words and knows he should be held accountable for that.

Finally, the most unique aspect of the recording is that it is a layered recording of a performance—or a meta-performance. By that I mean that the live performance with audience engagement (friends and musicians clapping in the background) makes it on the audio recording, but throughout the poem there is a peculiarly familiar voice, seemingly an audience member, who comments at various points in a call and response pattern known from black churches or community gatherings in African communities. This is very common in African American poetic and musical traditions, especially in blues and jazz, but in this case the audience member is not actually present at the original studio performance—at least not as an audience member. Scott-Heron actually listened to the recording of his own performance “with an open studio mike and became the audience,”[xiv] commenting and engaging at various points such as at the end of the corrected stanza where Scott-Heron says “Alright” after his recorded/recording alter ego finally gets the stanza right. In doing this, an idea that he came up with on the fly for sure, he blurs the line between the performance and the enduring artefact—the album. The performance remains intact as a whole, mistakes and everything, but in editing in his own voice as commentary on the final recording, he acknowledges both the permanence (audio recording) and the power (the spoken word causes action) of the (spoken) word when the poem makes the transition from studio performance to recorded performance to permanent record.

Though Scott-Heron’s trick of meta-performance remains unique so far, it nevertheless complicates what scholars like Ong and Wheeler attempt to separate neatly into a textuality/orality duality. As Urayoan Noel shows in his book on the Nuyorican Movement in New York City, the Black Arts Movement opened up the literary world, where many Nuyorican poets in places like the Nuyorican Poets Café would continue in a tradition of blurring the lines between the textual and oral world by emphasizing the kinetics of the poet on stage. Famously, Saul Williams, one of the most successful (slam) poets, would eventually give a stunning rendition of his poem “Coded Language,” for the HBO program Def Jam Poetry, playing with modes of textuality and orality in his own unique way, which you should check out below. Despite the fact that Scott-Heron’s play with the media of live performance and permanent record remains a singular occurrence, it is very much exemplary of the literary atmosphere of the late 20th century where poetry fully rediscovered its place on stage in front of an audience.

[iv] See for example Daniel Kane’s All Poets Welcome (2003) on poetry performances in New York City in the 1960s or Urayoan Noel’s In Visible Movement (2014) on Puerto Rican performance spaces in the wake of the Black Arts Movement.

[ix] Gild Scott-Heron and Brian Jackson, “H2Ogate Blues,” Winter in America, (New York City, NY: Strata-East Records, 1974). I should note that the poem does not exist in official written form so I’m transcribing this from the recorded version, making stylistic efforts to properly present the rhythm and conversational aspects of Scott-Heron’s poem.

[xiii] For an analysis of a live performance, see my article for the University of Nottingham Black History Month blog (http://blogs.nottingham.ac.uk/blackhistorymonth/2014/10/20/read-hear-and-see-and-feel-re-imagining-a-library-space-for-one-afternoon/).

Timo Schrader is a PhD student and the Impact and Outreach Coordinator in the Department of American and Canadian Studies at the University of Nottingham. He previously studied at Universiteit Utrecht, Ruprecht-Karls-Universität Heidelberg, and Loughborough University. His current research project examines the various forms of community activism, or sustainable activism, in the Puerto Rican neighbourhood of Loisaida in New York City between the 1960s and 1990s. Based on this project, he is creating a visual companion mapping the spatial history of activism in the neighbourhood (http://loisaidaproject.com/).
View all posts by Timo Schrader →
Tagged  African American Culture, Black History, Blues, C20, Civil Rights, Cultural History, Jazz, Masculinity, Media, Music, Popular Culture, Visual Culture, Whiteness.
Bookmark the permalink.