The Legacy of African American Abolitionist Frederick Douglass in Britain

Frederick Douglass, former slave and prominent nineteenth century abolitionist, is regarded today as a celebrated Civil Rights Activist and social reformer in American history. In fact, some academics, such as Professor Zoe Trodd, claim that Douglass is the most photographed American of the nineteenth century.[1] Douglass should be a central figure for Black History Month in Britain on this basis alone, but even more so when we consider his relationship with the UK. Douglass travelled here in 1845 for nearly two years, and visited Britain at least twice more before his death. His increasing fame here led to a successful career in America, and his legal freedom was ‘purchased’ by a family in Newcastle. Douglass would also not have been able to establish his newspaper, The North Star, without the support and donations from his British friends. I have been researching the legacy of Douglass in Britain for the last two years, and what started out as a small project has snowballed into a PhD at the University of Nottingham, which I started in October 2014.

Frederick Douglass, c.1855. This image was used in his second autobiography, My Bondage and My Freedom (New York, 1855)

Born enslaved in 1818, Douglass taught himself to read and write at great personal risk and eventually escaped in 1838. He caught the attention of William Lloyd Garrison, a radical abolitionist who soon employed him to speak about the horrors of slavery. Garrison urged Douglass to visit Britain in 1845 after the publication of his slave narrative threatened his safety. Douglass travelled from one end of Britain to the other: he lectured in Exeter to Edinburgh, London to Leeds, Belfast to Bristol. Douglass was a powerful orator and thousands came to hear him speak. Some meetings were so crowded that people were forced outside and strained to hear him speak through open windows.

Douglass was unknown to a British audience but became a celebrity because of his fierce oratory and status as a fugitive slave. He experienced the violence of slavery firsthand and shocked audiences with tales of brutality. Douglass’ eloquence forced some audiences to reconsider their view of an ignorant and ‘stupid’ slave: he did not speak in a plantation dialect and wanted to prove that African Americans were equal to the white race. Judging by the sale of his narrative (at least 13,000 copies and three British editions) Douglass was very popular – something which he had achieved himself.[2]

Douglass’ fierce attacks against slaveholders in the South often created controversy. His campaign against the Free Church of Scotland (who had accepted donations from slaveholders to help their fledging organisation) caused outcry amongst the Scottish people. This led to poems, songs, and the popular phrase “SEND BACK THE MONEY!” being painted across buildings in Glasgow and Edinburgh. (Douglass and some female supporters even carved the phrase on top of Arthur’s Seat in Edinburgh!) Douglass tapped into existing debates and raised serious questions as to whether British churches should revoke all fellowship with American slaveholders. The Free Church did not return the money but Douglass was the catalyst behind this campaign and it introduced thousands of people to the transatlantic world of American slavery.

There have also been tantalizing glimpses of Douglass’ relationship and influence on the African community in Britain (an area I will explore more thoroughly in my research). In late 1846 Douglass spoke at two meetings in Manchester, and an African who is named as Thomas Wilson “came forward with a large whip in his hand, as a specimen of that used by the American slave-driver and addressed the meeting”:

…Black people and white people have one god, one soul, one spirit, one master, one blood, and one day stand before judgment seat, one Christ.

Wilson may have been invited to speak but he is not advertised as one of the main speakers. More than anything, this source proves that Africans like Wilson believed they had the right to speak on the subject of slavery, just as well as any white man. They used the antislavery platform to make a political statement about their social condition, and this is crucial for understanding the African presence in Britain and perhaps, how they interpreted the British track record for abolishing slavery.

In the spring of 1847, Douglass left Britain in a whirlwind of controversy. After he was refused entry to a first class berth on racial grounds, Douglass wrote a letter to The Times and within days British newspapers across the country rushed to defend him. This racial discrimination had wounded British pride. The controversy reached such a height that Samuel Cunard himself, the owner of the steamship company Douglass was travelling with, was forced to publicly apologize. Douglass knew how to work the press and made sure his departure would not be forgotten.

Douglass’ second visit to Britain in 1859 was not as successful as his first, partly because of the rise in scientific racism and a lack of interest in abolitionism. However, Douglass’ speeches were printed in British newspapers throughout the American Civil War and beyond.[3] When Douglass died in 1895, British newspapers mourned the loss of the “celebrated American” who had made a “deep impression with his oratory” on both sides of the Atlantic.[4] Douglass took his place amongst the romanticized soldiers of antislavery, and he was famous because he was regarded as the best “representative” for African Americans.[5] British newspapers failed to mark the deaths of other fugitive slaves or activists in the same manner. Douglass was not a household name but it was clear that he had become a famous abolitionist, statesman and celebrity in his own right. This was recognised in part when a heritage plaque was dedicated to Douglass in London last year. 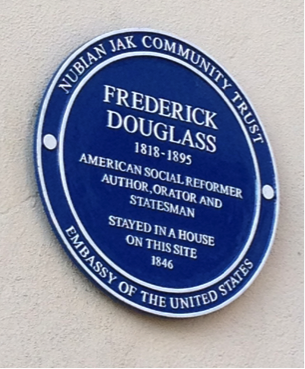 The Nubian Jak Heritage Plaque in South Kensington, London. It was unveiled on the anniversary of Douglass’ birthday in February 2013.

Teaching America 'Online': Designing and delivering the Online Distance course ‘A History of the Blu...
The Transatlantic Impact of civil rights anthem “We Shall Overcome”
Book Review: Slavery in American Children’s Literature, 1790-2010 by Paula T. Connolly

Hannah Rose Murray completed her BA History at University College London in 2011 and the following year, she studied for a Masters in Public History at Royal Holloway University. Hannah started a project on Frederick Douglass in 2012 and after two years research on his impact on Britain, she is due to start a PhD in American Studies at the University of Nottingham in September 2014. Check out her website at - https://sites.google.com/site/frederickdouglassinbritain/
View all posts by Hannah-Rose Murray →
Tagged  African American Culture, Black History, C19, Transatlantic, Visual Culture.
Bookmark the permalink.