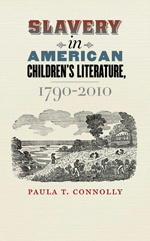 Joel Myerson observes in his review of Paula T. Connolly’s Slavery in American Children’s Literature, 1790-2010, that the bulk of literary criticism on slavery in the United States and scholarship on race and children’s literature rarely intersect. The centrality and significance of slavery to American cultural consciousness, particularly in constructing race and race relations across media, would seem to cry out for such a study. Many scholars of children’s literature, however, such as Peter Hunt or John Stephens, tend to focus on the British canon, while discussions of American children’s literature are often focused on the oeuvres of particularly unique writers and illustrators, such as Dr. Seuss or Maurice Sendak.

Connolly’s text is well-situated to help lay a foundation for the continuing study of American children’s literature as an individual field unto itself. This ambitious and highly accomplished work examines an extraordinary breadth of material. Connolly situates both the specific popular texts she explores and the genres of which they are representative as a foundation upon which two didactic goals are accomplished vis-à-vis American children and childhood: first, these texts inform the development of children’s identities, both as racialized individuals and as Americans (and all the cultural baggage that American-ness involves), and second, each successive generation of texts generates a complicated understanding of contemporaneous racial politics by reshaping the historical memory established by its precedents.

Connolly’s work is structured chronologically, with time spans divided by the Civil War, the birth of the Harlem Renaissance, and the post-Second World War momentum of the Civil Rights Movement. The first two chapters overlap in terms of time, but are divided by the texts’ allegiances to different sides of the pre-emancipation debate regarding slavery. Three literary articulations of slavery—the autobiographical slave narrative; the pro-slavery plantation novel, and white-authored abolitionist fiction—also delineate Connolly’s discussion, and set an early precedent for categorization that runs throughout the text.

Chapters 1 and 2, covering the antebellum period, examine both abolitionist and proslavery children’s literature, and the varying degrees to which such texts advocate their respective positions on emancipation. Connolly notes in Chapter 1, covering abolitionist literature, that antebellum children’s texts are in many ways microcosmic representations of national debates from the time, particularly within abolitionism, itself an “umbrella term” (14); as such, Connolly categorizes various texts in Chapter 1 as radical (Noah Webster’s The Little Reader’s Assistant [1790]), moderate (Samuel Goodrich’s Tales of Peter Parley [1827-1830] series), or conservative (William Taylor Adams’ Hatchie, the Guardian Slave [1853]) abolitionist. Chapter 2, on antebellum proslavery texts, again identifies categories including plantation stories (Caroline Gilman’s Recollections of a Southern Matron [1838]), proslavery adventure novels (Francis Robert Goulding’s Robert and Harold; or, The Young Marooners of the Florida Coast [1852]), and confederate schoolbooks. These chapters are the strongest of the book. Connolly not only discusses many little-known texts, but subjects them to the full force of contemporary children’s literature theory. Naturally, themes of power and fantasy occupy much of the discussion—representations of black slaves as the weakened recipients of either white abuse or pity are par for the course—but Connolly’s take on the highly surreptitious language and politically-charged subtext of both abolitionist and proslavery texts to enforce racial hierarchy is potent and highly relevant to criticism of children’s literature across eras and genres. Connolly takes advantage of the Rare Book Collection at The University of North Carolina’s Charlotte Library to include many obscure texts and illustrations.

Chapter 3 focuses on the Reconstruction period to the early twentieth century. Connolly identifies the tension that remains in race relations after emancipation, and cites literacy as a site of adult social control and contention among young children, both black and white. A particular strength in this chapter is Connolly’s discussion of biographies of individual African Americans for African American readers: here begins a thread of criticism that follows through the last three chapters of the book. Through narrative and language, Connolly demonstrates how different authors choose to represent difficult subject matter to children: slavery, dehumanizing violence, hopelessness, and the often-fraught routes to freedom and prominence for many of the biography’s subjects.

Connolly establishes how burgeoning pride and a growing sense of the need for communally relevant literature helps to lay the groundwork for the Harlem Renaissance in Chapter 4, particularly in W.E.B. Du Bois’ Brownies’ Book magazine (1920-1921), which used biography and history rather than fiction to embolden its African American child reader. However, these texts and other similar texts lay amidst the context of mainstream publishers still “firmly entrenched in notion of white superiority.” (134) Minor African American characters in mainstream children’s literature remain infamously grotesque, with such caricatures as the pickaninny, the fool, the cheat, the loyal “Mammy,” and so on. With the antebellum period largely a memory, white mainstream literature utilized the plantation as a glorified fantasy site in which white children were assured of their racial superiority. Genres such as the neoplantation novel and the pseudoabolitionist adventure novel, despite differing political views, continued to endorse images of black powerlessness and white intelligence. Despite this, other, African American-authored texts, particularly those focused on history, worked to eradicate the internalized shame and develop righteous anger among readers, particularly in the work of Arna Bontemps’ Story of the Negro (1948), the first African American-authored book to receive a Newbery Honor.

Chapter 5 focuses on 1951-2010 and the Civil Rights Movement, and highlights the 1970 creation of the Coretta Scott King Award, an honor designed to recognize African American writers and illustrators of children’s literature. Beyond this, Chapter 5 may be the text’s most extraneous chapter, highlighting contemporary works that depict the slave experience: Connolly’s great strengths lie in her research of historical texts, and while her scholarship on depictions of race relations and slavery in contemporary children’s literature are intriguing, they are less substantial than discussions in previous chapters, as texts and genres are less easily categorized and theorized. The significance of religious movements to the African American experience is mentioned briefly here, in relation to Carole Boston Weatherford’s 2006 picture book Moses: When Harriet Tubman Led Her People to Freedom, but remains largely unexplored and superficial. There is also little discussion of representations of slavery in modern school textbooks, which is a sorely missed opportunity.

This, however, is not necessarily a failing of the book, nor is it to say that this book is superficial. Connolly’s work is already thoroughly ambitious and well researched, and lays a rich foundation for much future scholarship; I expect this text to be thoroughly and exhaustively cited in future theses and dissertations. In her discussion of African-American voices in American children’s literature, Connolly integrates a study of aspects of the Harlem Renaissance into the field of children’s literature that is both progressive and necessary, and ultimately this volume is a happy marriage of New Historicist perspectives and theory-based investigation. If anything, Connolly’s discussions were tantalizingly short, although this is a necessary limitation for a manageable volume. Scholars in American children’s literature will find many cues for further research opportunities in this volume, as each chapter provided enough material for an entire book in and of itself.

Peter Hunt, An Introduction to Children’s Literature (Oxford: Oxford UP, 1994)