Book Review: Hidden in the Mix – The African American Presence in Country Music by Diane Pecknold 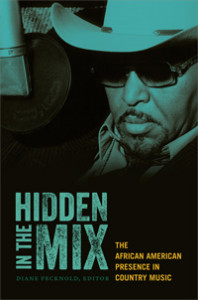 For many years, country music has been viewed as the domain of the white man. Legendary artists such as Willie Nelson, Johnny Cash and George Jones have received international acclaim and often noted as being the ‘Kings of Country’. It has been noted that ‘Country is often seen as the whitest, most segregated of all styles: the redneck soundtrack of the racist South,’[1] and with this in mind many historians and ethnomusicologists have sought to unearth the roots of the country music genre. Much like Pamela E. Foster’s works, which include My Country: The African Diaspora’s Country Music Heritage and My Country, Too: The Other Black Music, Diane Pecknold has created an edited collection which attempts to challenge the current perceptions of country music. The objective behind Hidden in the Mix: The African American Presence in Country Music is to shed some light on just how influential African Americans were in the creation and development of country music, one of the most commercially successful genres of music. Pecknold’s collection of essays is certainly an enjoyable, informative and charming read, and although bursting at the seams with interesting material from an expansive timeframe, the collection incites more questions, some of which are ultimately left unanswered.

The collection of essays is divided between two parts. Part One, entitled ‘Playing in the Dark’, contains four chapters which discuss the origins, identity and modernization of country music, from black hillbillies in the early 1920s up to the commercially successful days of Ray Charles in the 1960s. Conversely, the eight chapters housed in Part Two, entitled ‘New Antiphonies’, discuss a wide range of topics including the African American abandonment of the banjo and country music amongst the African diaspora in St. Lucia, to the hip hop influence in country music. The inescapable racial tension of the twentieth century is the common thread that runs through each of the chapters within the volume, and is evident from the very first chapter on black hillbillies in the 1920s, up until the discussion of hip hop and country music in the late 1990s. It is with that in mind that issues of race will play a large role in this review.

Race has been a major factor in country music since its inception and the contributors to this volume comment on its impact in a thorough and edifying manner. Patrick Huber’s chapter, ‘Black Hillbillies’, focuses on black hillbillies and their participation on old-time recordings between 1924 and 1932. Huber presents a compelling thesis and notes that, although racism was rife, there were incidents of racial integration within country music as far back as 1924. According to Huber, between 1924 and 1932 black and white artists collaborated at twenty two racially integrated recording sessions and produced sixty nine recorded masters. (21) Although twenty two racially integrated studio sessions in eight years may not seem like a significant amount, the reader is oft reminded of the pervasive racism and Jim Crow segregation that swept through the Southern states, and with this context in mind, the magnitude of these recording sessions become apparent. Although these sessions occurred, Huber also informs the reader that in the 1920s hillbilly music was specifically marketed towards rural and small-town white consumers, whilst black consumers were targeted with ‘race records’ which encompassed blues, jazz, gospel numbers and sermons.

Tony Thomas’ contribution on why African Americans renounced the use of the banjo is also fascinating in its racial context. Thomas reflects in ‘Why African Americans Put Down the Banjo’, that there was an assumption that the banjo was acquired by whites and used in black-face minstrelsy to conjure degrading depictions of African Americans. Music historian Bruce Bastin noted that ‘the parody of the Negro in minstrelsy could be tolerated by blacks at a time of lesser social change. As social distance grew to physical and psychological distance, this stereotyping, once tolerable as crude but harmless behaviour, became directly offensive.’[2] Thomas refutes such claims about the use of banjos and instead, argues that interviews of African American banjoists contain no discussion of minstrelsy as a reason for the abandonment of the banjo; rather they often spoke of the shows as sources of the new music and that the banjo did not fit neatly with other musical styles. (151-153)

Pecknold’s chapter on ‘Making Country Modern’ is perhaps the most insightful and engaging in the entire book. Pecknold argues that Ray Charles was responsible for recording the first ever million-selling album of country songs – an accolade that most music scholars and enthusiasts often fail to recognise. Pecknold’s chapter follows on nicely from Huber’s discussion of black hillbillies; illustrating that in a time span of 30 years, country music had undoubtedly modernized – no longer a genre associated with ‘backward hillbillies or ignorant hayseeds’, but a genre that infiltrated the ‘core audience of white southern rural to urban migrants’ who had ultimately become the ‘industrial blue collar middle class’, (94-96) a development Pecknold attributes to Charles’ classic album Modern Sounds in Country and Western Music, released in 1962. Pecknold notes that the Country Music Association (CMA) used the album to construct a different social narrative, one that situated disparaged southern white migrants within a national, middle-class, integrationist consensus.’ (91)

Reminding the reader of the intense racial context further highlights the impact of Charles. In an essay composed by Jeffrey A. Keith, ‘Fiddling with Race Relations in Rural Kentucky’, a racial context comes to the forefront. Keith successfully conveys the impact race had on the career of Bill Livers – again noting that regardless of the restrictions imposed on African Americans during the era of Jim Crow segregation, Livers was able to cross racial boundaries and make a successful living from playing country music. The structuring of the collection potentially raises some issues. Why was the career of Ray Charles (who rose to prominence in the late 1950s) discussed before the careers of Arnold Shultz and Bill Livers, whose careers spanned the 1920s and 1930s? Discussing the career of Charles after Shultz and Livers would not only have made more chronological sense, but it would have resulted in a more fluid read. The issue of race changed considerably from the 1920s to the 1960s; therefore it seems problematic to go back and forth in time when attempting to discuss the African American presence in country music. Any change in race relations over the years surely would have impacted black participation in the genre.

The presence of African Americans within the genre of country music has long been ignored. Diane Pecknold and her array of contributors have presented a collection which conveys, without doubt, that there was a considerable African American presence in country music, from its commercial beginnings in the 1920s up to its conflation with pop and hip hop music in the 1990s and 2000s. However, despite the collection’s thorough discussions on race, it is disappointing that more acknowledgement isn’t given to the impact such musical integration had on periods such as the Civil Rights Movement. Although race is a prevailing theme throughout Hidden in the Mix, the quest for, and obtainment of civil rights, is largely ignored. Music played a crucial role in the pursuit of racial equality; it was a device used to encourage and motivate African Americans and the permeation of white audiences made it even more powerful.  Furthermore, the absence of dialogue regarding African American women’s participation, or lack thereof, means that the reader is judging the African American presence in country music based solely on the successes and failures of black men. Barbara Ching discusses the role of African American country songwriter Alice Randall in her chapter and Dinah Washington and Aretha Franklin are mentioned in passing, however, it is noticeable that African American women are for the most part neglected. Regardless, Hidden in the Mix is an enjoyable, enlightening and captivating read that finally gives recognition to the African American presence within one of the most successful music genres in the world.

Book Review: The Republican Party and the War on Poverty: 1964-1981 by Mark McLay
The Best of 2015, and What’s Next for U.S. Studies Online in 2016
Sea Birds, Castaways, and Phantom Islands off Newfoundland

Glen Whitcroft is a current PhD student at Northumbria University, working under the supervision of Professor Brian Ward. His research interests are rooted generally in African American music, with emphasis on its social and political impact. Following on from research conducted with Catherine Clinton at Queen's University Belfast, his PhD research topic is entitled 'We Shall Overcome: Music, Protest, and the Quest for Civil Rights in the United States and Northern Ireland, 1955-1975.'
View all posts by Glen Whitcroft →
Tagged  African American Culture, Black History, C20, Cultural History, Music.
Bookmark the permalink.