Selling Houses to Buy a Dream: White Diaspora and the Suburbs in Richard Ford’s Bascombe Trilogy 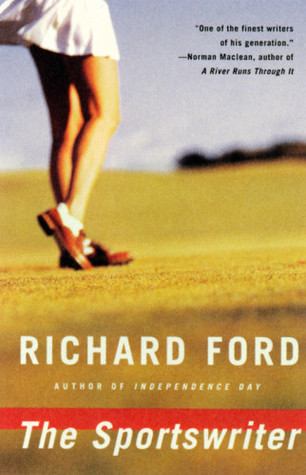 The first novel in Richard Ford’s Bascombe trilogy, The Sportswriter, was published in 1986. Set in the fictional New Jersey suburb of Haddam, it follows Frank Bascombe, a failed writer, over the course of an Easter weekend as he struggles to cope with life in the wake of his young son’s death and the subsequent breakdown of his marriage. The novel was very-well received on its initial publication, with critics reading Frank Bascombe as an American everyman, though Ford has denied that this was his intention. As we move from The Sportswriter, to Independence Day (1995) and The Lay of the Land (2002) Frank becomes a successful realtor, turning his back on his writing career while embracing his new role on the New Jersey property market.

The Bascombe trilogy is written in a muted, realist style, although it is something of a departure from the dirty realism of Raymond Carver and Tobias Wolff that Ford was associated with through his other work. Frank’s unashamedly middle-class lifestyle is a marked contrast to the working class characters Ford wrote of in Rock Springs (1987).  The minute detail with which the New Jersey landscape is described throughout the novels lends them a distinctive cinematic quality, something that is evident in much of Ford’s other writing, even more so in his most recent book, Canada, published in 2012.  Despite the trilogy reaching a conclusion with The Lay of the Land, Frank Bascombe reappeared in a piece that Ford read at a recent public appearance so it is possible this isn’t the last we’ve heard from him.

In Independence Day, Frank Bascombe advises an irritating househunter that, “you are best off coming as close as you can and trying to bring life to a place, not just depending on the place to supply it for you” (76).  Frank’s concept of home shifts from when we first meet him in The Sportswriter to when we finally leave him at the end of The Lay of the Land.  He begins The Sportswriter bound up in his idea of the ‘home’ – not just the physical bricks and mortar – but in the quest to find the perfect place in which to exist.  By the time of The Lay of the Land, Frank is more interested in the process of finding, buying, and selling houses than in what happens after he, or his clients, move in.

Literary representations of American suburbs are largely negative.  Seen as a defeat of sorts, life in the suburbs is routinely depicted as vapid, empty, repetitive, and bereft of any meaning.  An emergent body of literature in sociology and history rejects this idea, questioning the motivations behind such fictional representations.  In spite of a sizeable number of inhabitants who were content with life in the suburbs, there is still a tendency to resort to negative fictional depictions. Somewhat tongue in cheek, in an essay about Revolutionary Road for the New York Times Book Review, Richard Ford asks, ‘just how bad can it literally be out there in the burbs?’

In White Diaspora, Catherine Jurca challenges these literary depictions.  She uses the provocative term ‘white diaspora’ observing that, ‘it is designed to emphasize and lay bare the role of the novel in promoting a fantasy of victimization that reinvents white flight as the persecution of those who flee’ (8-9).  The suburbs then, according to the dominant trend in American fiction, are not somewhere you voluntarily go. They are filled with tedium, conformity, and an all-encompassing sense of the end of the line.

The houses Frank lives in play central roles in the novels.  Yet, over the course of the days that the novels trace, Frank is more often than not to be found in his car than in his house.  This leads him to ask whether cars are the only site of “interior life left” (The Lay of the Land 297).  For all his talk about bringing life to a place, Frank spends the majority of his time in physical and psychological transit.  In the first sense, he is in constant motion throughout the books, travelling between fixed points, filling in the events of his life in flashbacks as he commutes.  His house, the house of his ex-wife, and the houses he sells, become beacons he is drawn to.  Once he reaches them, he instantly wants to leave. 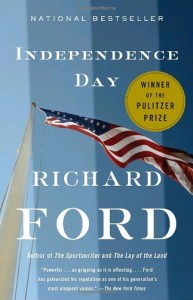 He spends much of The Sportswriter speaking longingly of the virtues of anticipation and possibility, saying “I hate for things to get finally pinned down, for possibilities to be narrowed by the shabby impingement of facts […] I suppose I will always fear that whatever this is, is it” (83). If The Sportswriter is about the quiet thrill of anticipation, Independence Day and The Lay of the Land are about Frank’s attempts to reinforce his interpretation of the American Dream in the form of real estate.  Frank becomes a successful realtor, following the mantra that “you don’t sell a house to someone, you sell a life” (Independence Day 112).

Independence Day sees him plagued by the insufferable Joe and Phyllis Markham with their unrealistic expectations of the New Jersey property market.  Their view is that they won’t settle for anything less than their dream home but Frank sees it differently, observing that, “The Markhams say they won’t compromise on their ideal.  But they aren’t compromising!  They can’t afford their ideal.  And not buying what you can’t afford’s not a compromise; it’s reality speaking English” (90).

The Markhams link the physical structure of a house with the emotional and social status of the home they think they deserve.  Phyllis articulates their motivation by claiming her husband believes that,

if we’re leaving Vermont we should be moving into a sphere of more important events that would bring us both up in some way.  The places you showed us he didn’t think did that.  Your houses might be better for someone else (189).

It is important to note that Frank describes real estate as, “not about finding your dream house but getting rid of it” (301).  The Markhams designed and built their dream house in rural Vermont.  However, the nagging belief that they could be doing better prompts them to sell up and move to New Jersey where they find themselves unable to afford the houses they desire.  They insist that the house will make them, rather than they make a home.

Frank’s theory of the home does not compare favourably with his own actual experience of it.  After his divorce, he remains in the house he shared with his first wife, Ann, and their children.  He is perfectly happy there for a time as, “it felt like home […] and if not my home, at least my kids’ home, someone’s home” (107).  When Ann moves away to remarry, Frank is compelled to sell the house because he feels “strangely outdistanced as its owner … I was no longer, I felt, preserving anything for anything, even for myself” (107).

Not only does he sell the original family home, he buys and moves into the house that Ann and the children had moved to after the divorce.  He dismisses this as nothing more than a convenient business transaction, but it is an indication of how bound up in the home Frank’s idea of himself is.  By remaining in the original family home, he attempts to hold on to some sense of order but this is completely destabilised when Ann remarries.

In the Bascombe books we see the landscape of the home repeatedly linked with individual improvement.  These houses become symbols of the American creed of progression but we are left wondering whether they ever really become homes.  Near the end of The Lay of the Land, Frank observes that,

Real estate might seem to be all about moving and picking up stakes and disruption and three-moves-equals-a-death, but it’s really about arriving and destinations, and all the prospects that await you or might await you in some place you never thought about.  I had a drunk old prof at Michigan who taught us that all of American literature, Cotton Mather to Steinbeck … was forged by one positivist principle: To leave, and then to arrive in a better state. (201)

Unlike the conformity of the stereotypical American suburb, Frank’s houses across the trilogy are all unique in some way.  In contrast with the Markhams, Frank possesses the wealth to purchase the dream home, only to then spend most of his time dismissing the importance of the building in creating a sense of self.  He resists the victimization that Jurca speaks of, repeatedly insisting that he is content with his life.  His constant motion throughout the novels suggests otherwise, placing him in just the same dilemma as Joe and Phyllis Markham.  They are forced to accept the disappointment of renting one of Frank’s solid little townhouses rather than buy the special home they had set their hearts on.  Although fairly settled by the end of The Lay of the Land, Frank is still plagued by a sense that something is missing.  They have all bought into the American creed of progression and improvement which renders them unable to believe that what they have might be as far as it goes.

The issues raised in Independence Day and The Lay of the Land – rising house prices, shoddy construction, profiting on the back of others’ aspirations (for what else does a realtor do than make money from people in search of their dream home?) – are still remarkably relevant today.  The Markhams fall victim to their own outsized ambitions but also to the upswing of a property bubble that eventually crashed with devastating consequences for millions across America.  And through it all there is Frank Bascombe who claims to remain virtually unscathed by any of the various crises those around him experience and yet his protestations ring hollow.  Frank is just as captivated by the dream of success and improvement, and so the reader is left to wonder how he can bring life to a place if he must leave it as soon as he arrives.

The Authoritarian Heroes of Liberal Individualism
African American Theatre and The S Street Salon
Folklore and Gay Literature: The Making of a Community

Jenny is a PhD student in the School of English, Trinity College Dublin working on representations of the masculinity crisis in contemporary American fiction. Jenny is a Postgraduate rep for the IAAS (www.iaas.ie) and can be found online at https://tcd.academia.edu/JenniferDaly or (worryingly often) on Twitter @jennybdaly.
View all posts by Jennifer Daly →
Tagged  American Middle-Class, C21, Contemporary Fiction, Masculinity, The Suburbs.
Bookmark the permalink.