Home » Research » History » 1919: the Boston Molasses Flood and the Year of Violence and Disillusion

1919: the Boston Molasses Flood and the Year of Violence and Disillusion 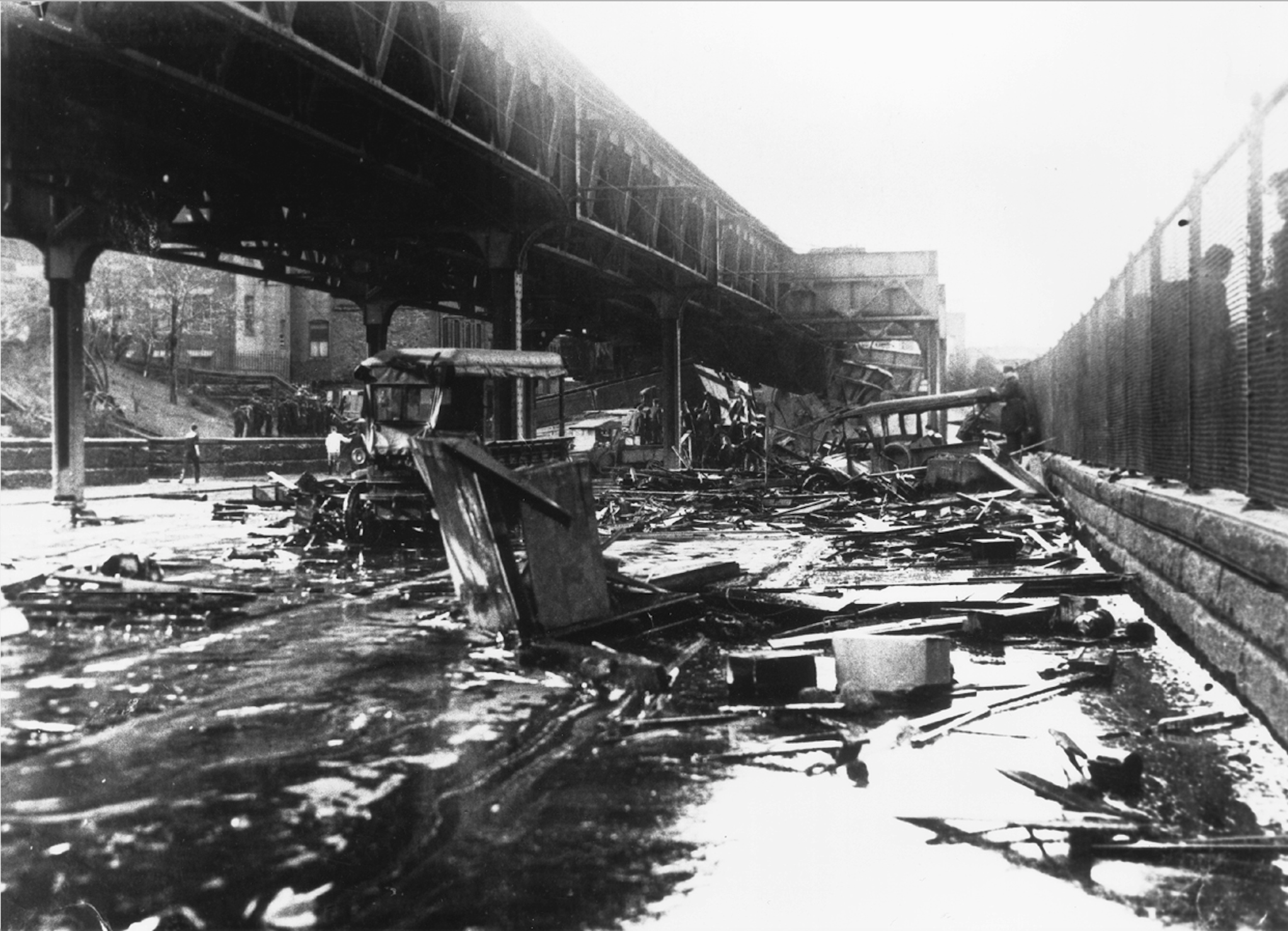 On January 2, 1919, Calvin Coolidge stood before a joint gathering in the Massachusetts House Chamber, situated down the hall from where he had served for five years as President of the State’s Senate, to take the oath as Governor.[1] In his first address to the General Court as Governor, he spoke candidly of the need to move on from ‘the autocratic methods of war’ (World War I was little over five months past) to the ‘democratic methods of peace’, and the necessity for stability (both economically and socially), not just in Massachusetts but also across America.[2] Within five years, Coolidge would ascend to the highest rung of American politics, serving as the country’s thirtieth President — but those years were seldom peaceful and never truly stable. Rather, by the time Coolidge stepped down from the presidency on March 4, 1929, he had in one form or another overseen one of the most difficult decades in America’s history.[3]

Thirteen days after his opening address, Coolidge faced his first test in office, and arguably one of the most bizarre disasters in American history. During an unseasonably warm afternoon at around 12:30 pm on January 15, 1919, a full-to-capacity storage tank – 50 feet-high, and 90 feet in diameter – belonging to the Purity Distilling Company,a Massachusetts-based chemical firm, burst at 529 Commercial Street in the North End of Boston.[4] In doing so, the tank unleashed 2,300,000 gallons of molasses, which quickly morphed into a 15-foot high and 160-foot wide dense black wave that tore through the heavily populated area at a speed of 35 mph.[5] As it did so, it levelled the entire waterfront, which at the time boasted several commercial outlets and a number of neighbourhood tenements.[6]

Amongst the devastation, which also included elevated rail tracks, and the three-storey Engine 31 Fire House, were various animals (notably several horses and dogs), and 21 dead, including two children of ten years. 150 people were also injured.[7] As one reporter noted the next day:

Molasses, waist deep, covered the street, swirled, and bubbled about the wreckage. Here and there struggled a form, whether it was animal or human being was impossible to tell. Only an upheaval, a thrashing about in the sticky mass, showed where any life was … Horses died like so many flies on sticky flypaper. The more they struggled, the deeper in the mess they were ensnared. Human beings — men and women — suffered likewise.[8] 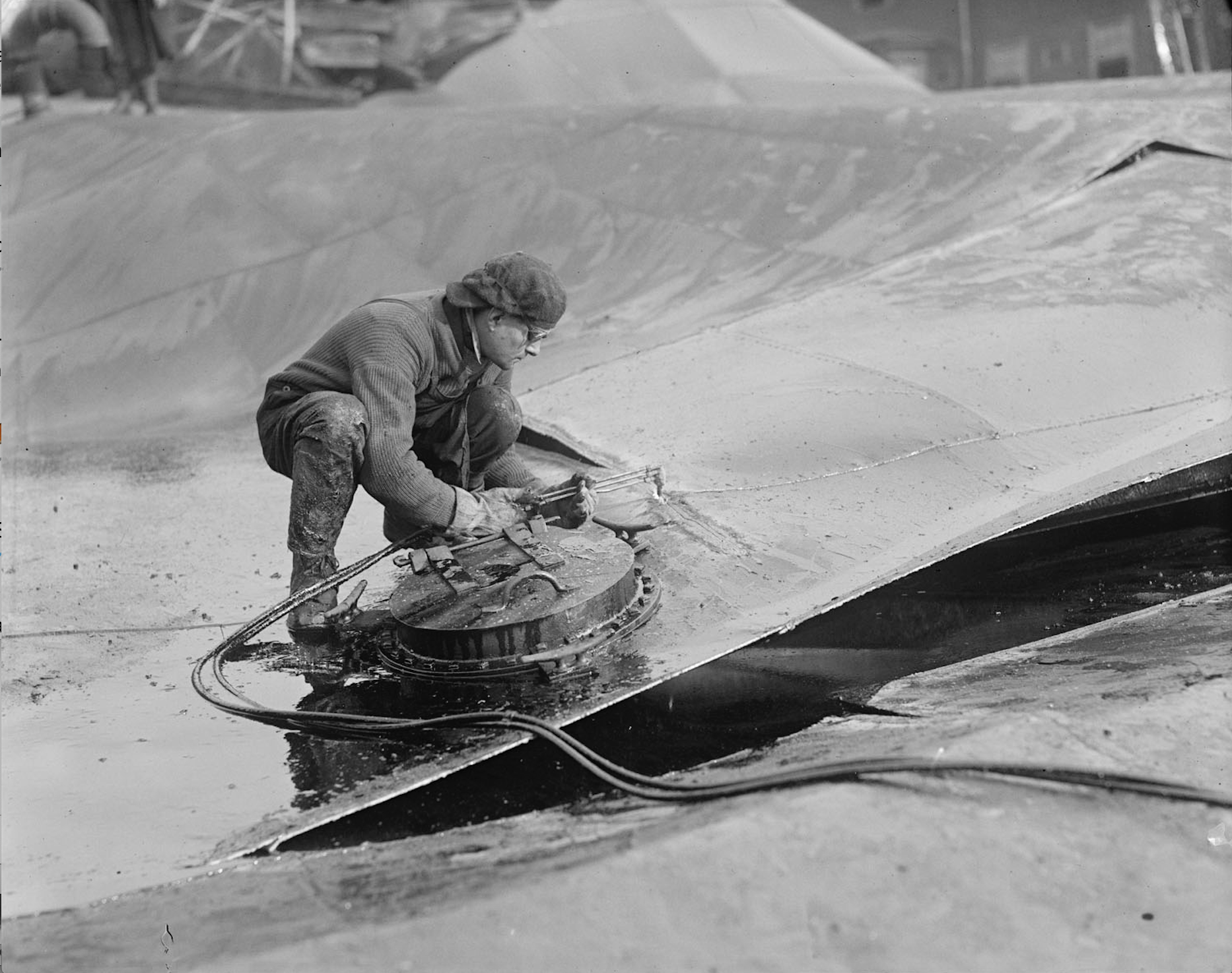 While molasses had been a cornerstone of the Boston economy since the colonial era, the city had never had to undertake its clean-up on such a large-scale. Crews were deployed en-masse to attend to the gooey substance, first trying to dilute and flush it from the streets using water hydrants.[9] When these proved ineffectual, fireboats showered the substance with salt water, which thinned it and eventually ran it into the Boston Harbour.[10] For weeks thereafter workers tracked molasses, pumping it from cellars, basements, and the ground floors of an array of buildings.[11] To the present day, some residents of the city’s North End insist that on hot afternoons the local air is tinged with the feint, cloying scent of molasses.[12]

But the true legacy of the Great Molasses Flood lies in the financial impact it had on Boston. In terms of the damage alone, the cost exceeded $100 million in today’s money. Furthermore, the flood brought with it 125 lawsuits against the United States Industrial Alcohol Company (USIAC) and a legal battle that lasted over six years.[13]The court eventually ruled in favour of the plaintiffs, asserting that the tank had been considerably overfilled and was for all intents and purposes not structurally sound.[14] Despite the conclusion of the court, however, speculation remained rife. While some experts claimed the molasses spill was sabotage, committed by business rivals, the USAIC placed blame on anarchistic factions.[15] The company alleged that Boston’s North End, which was largely populated by Italian immigrants and Irish-Americans, was an incubator for political radicalism. The media, as well as many political factions, viewed Italian- and Irish-Americans as anti-organizational leftists who advocated direct action, including terrorist violence, in their quest to overthrow the American government.[16] 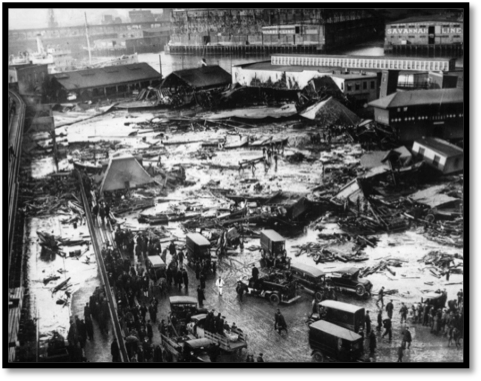 In this respect, the Molasses Flood and its fallout set the tone for what was, arguably, the most complex period in American history: 1919 to 1929. World War I had developed a desire in the American citizen that was driven by a ‘fusion of immediate demands with grandiose social and political goals’ as well as desires to engage in the new forms of consumerism.[17] And in so far as the war had also fostered a sense of national cohesion, in part manufactured by President Woodrow Wilson, that saw race, class, gender, and region set aside in the quest to defeat a common enemy, this was lost in the immediate aftermath of the war. What emerged in its place was a violently nationalist populace, aided by industry leaders, journalists, and the US Government, who sought to defend their country against a perceived ‘new enemy’, which was defined as the enemy within: the disgruntled, leftist (and often non-native), working classes.[18]

While turmoil and a general sense of insecurity and fear dogged much of the country, in a microcosmic sense, no city epitomised the complexities of this period quite like Boston, Massachusetts.Boston experienced some of the most notable and certainly the most testing events of the time, including anarchist bombings,[19] a cascade of racially-motivated mob attacks, as well as consistent worker protests, including the now infamous Boston Police Strike of September 1919.[20][21] The Molasses Flood in this context, served as a notable precursor for the notions of uncertainty, fear, and disillusion that would be felt for many years to follow. When Coolidge stood before the joint gathering in the Massachusetts House Chamber on January 2, 1919, he took the oath to govern a commonwealth about to experience a decade of unpredictable social, political, and economic transition that lent itself more to social upheaval than the social uplift the American media and government had suggested would follow post-war.

[3]Coolidge is often written about as a weak president. After a promising early political career, he assumed the presidency upon the death of Warren Harding. But a year later, the death of his sixteen years old son, Calvin Jr. overwhelmed him with grief and he lost interest in politics. It has been suggested by Robert E. Gilbert that Coolidge showed distinct signs of clinical depression and that he served out his presidency a broken man. Robert E. Gilbert, The Tormented President: Calvin Coolidge, Death, and Clinical Depression(California: Greenwood Publishing Group, 2003), 30.

[5]Molasses was often fermented to produce rum and ethanol. It was an active ingredient in alcoholic beverages and a key component of industrial cleaners and the production of munitions.

[17]David Montgomery in Barbara Foley, Spectres of 1919: Class and Nation in the Making of the New Negro(Illinois: University of Illinois Press, 2003), 9-10.

[19]The international success of communism, particularly the Russian Revolution of 1917, coupled with the growing influence of socialists such as American Union leader, Eugene V. Debs, nurtured a sense of fear at home amongst many government and corporate leaders.

[21]Anti-war socialists had been brought up in the European tradition of the class struggle, and they viewed the war as the ultimate capitalist deception; Debs denounced the war as such in a speech at Canton, Ohio, in June of 1918.

60 Seconds With Bridget Bennett
Night: Another Frontier in American Wilderness Studies?
“Your Name is Safe”: The Ladder as lesbian literary community
Meet the Curator: 'Labour's Special Relationship'
Teaching History and Theory through Popular Culture: My First Time Designing a Module
60 Seconds With Joe Street
Storify of our #Bookhour on ON SUCH A FULL SEA by Chang-rae Lee
How Nineteenth-Century White American Women Writers Have Facilitated the Rise of Christian Feminism

In June 2017, Dr Craig Doughty completed a PhD thesis entitled ‘Constructing a history from fragments: jazz and voice in Boston, Massachusetts, circa 1919 – 1929’ (Keele University). This work applied an interdisciplinary methodological approach that incorporated musicology and subaltern studies. The focus was on the appropriation of jazz music produced by underrepresented blacks in Boston during the period into a form of protest dialogue. Dr Doughty's current research, entitled ‘Can the Subaltern Play’ seeks to broaden the scope of his PhD thesis by focusing on the period 1910 to 1949. In doing so, it will present the possibility for comparison with the social, cultural, and economic dynamics discussed in his original work. Additionally, this research provides a suitable opportunity to advance Dr Doughty’s proposed methodological approach to historical reconstruction over a longer period, and in doing so ascertain to what extent the social and cultural dynamics of black Boston changed from the turn of the century to its mid-point and the causes for these changes.
View all posts by Craig Doughty →
Tagged  American Working Class, C20, Labour history, Political History, Presidents, Urban history.
Bookmark the permalink.