Summer Camps and US Empire 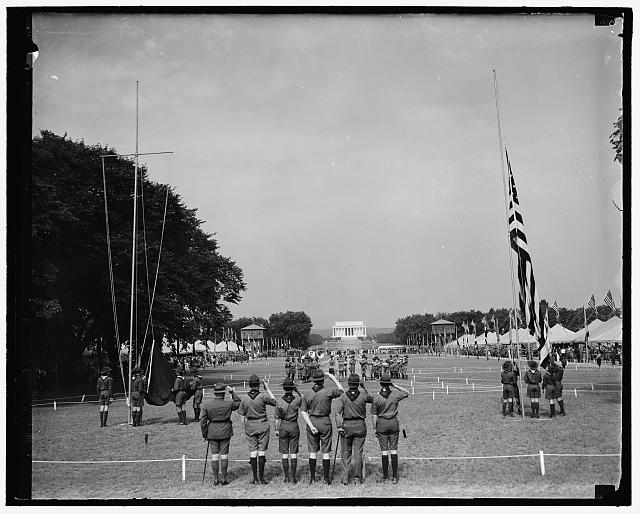 Imagine the excitement of the more than two hundred adolescent boys, each about to enter the biggest stage of their lives. Selected to represent the Boy Scouts of America abroad, they had crossed the Atlantic in July 1929 to participate in the largest summer camp held at the time: the World Scout Jamboree at Birkenhead, England. Dressed up as native warriors, Spanish conquistadors, gold rush adventurers, and hardy cowboys, the youngsters walked out into a roar of recognition, egged on by the cheers of an estimated twenty thousand spectators, among them diplomats, statesmen, and a flurry of foreign correspondents. The US Scouts’ pageant was the high point of the jamboree ceremonies. As their carnival of cultures narrated America’s rise from humble beginnings to modern greatness, the Scouts mingled joyfully in the grand arena, performing tribal dances, lasso tricks, and feats of horsemanship in an atmosphere of peace and reconciliation. The thunderous applause at the end of the show validated a staggering rewrite of history: with their pageant, the boys had playfully transformed the North American frontier, a site of imperial conquest and racial violence, into the birthplace of friendship between races and nations.[i]

In spite of the cultural turn’s enduring appeal, many scholars of US empire are still slow to integrate “soft” factors such as youth, education, leisure, and recreation into their broader analyses. The scene described above should prompt them to up their game. Few institutions better captured the overlapping frontiers of empire and childhood in US history than the summer camp. For Leslie Paris, the late-nineteenth and early-twentieth century rise of these adult-supervised nature retreats “represented a particularly American solution to the question of children’s socialization in modernity.”[ii] However, to the extent that this modernity was imperial, summer camps – and the youth organizations that operated them – also generated social spaces in which the hard realities of empire and the soft influences that masked and maintained them converged. This essay focuses on three points of convergence, interrogating how summer camps functioned as (1) locales that popularized analogies of child development and national growth; (2) sites that presented empire-making as playful and innocuous adventure; and (3) events that furthered discriminatory practices based on gender, race, class, and age. Not simply a product of adult ideas, this history was profoundly intergenerational, pivoting on the interplay of adult prescriptions and youthful practice.[iii]

First established in the late 1800s, as the United States was crossing the threshold from continental to oceanic empire, summer camps held out the promise of social and racial regeneration through a return to nature and gendered ideals of Anglo-Saxon citizenship. Sending their offspring out-of-doors, camp promoters told white-middle class parents, would shield their children from the corrupting forces of urban-industrial life. The idea that fresh air, hiking, swimming, and “roughing it” in pristine surroundings benefited the development of white youth echoed Granville Stanley Hall’s recapitulation theory, which made headlines in the early 1900s. Recapitulation described growing up as a process that paralleled white society’s evolution from barbarism to modernity. For the Progressive-Era psychologist, youth was preferably male. “Nearer to primitive man” than girls, boys should imitate the ways of savages, knights, and pioneers to mature into men with strong muscles and superior morals.[iv] As summer camping spread throughout the United States and leaped onto the international stage in the first decades of the twentieth century, so did Hall’s theory. Youth organizers on both sides of the Atlantic saw in recapitulation an alluring formula for solving a self-diagnosed “crisis of masculinity”; for infusing a healthy dose of ruggedness in white males who railed against feminism and multiracialism; and for ensuring their success in a world governed by great-power rivalries and Darwinist strife.[v]

Although the camping movement quickly branched out in terms of catering to the needs of different religious, ethnic, and political groups, almost all child-centered activities took place in highly ludified settings. Play, fun, adventure, and innocence were the cornerstones of an imperial pedagogy that taught young campers to see themselves as future citizens of a youthfully benign and exceptionally powerful settler nation. Adopting Native American names became a common practice in camping culture, both to market sites as wilderness environments unsullied by civilization and to cater to children’s fantasies. Much of the “Indian culture” touted by organizations such as the Woodcraft Indians, the YMCA, and the Boy Scouts was utterly fabricated. Teepees were pitched next to tents, and white Indianthusiasts showed children how to make tomahawks and peace pipes. The hope was that the tribal songs, yells, and tales shared at campfires would kindle in the young the same desire for discovery and exploration that had animated their pioneer forefathers. This expansionist legacy also resonated from myriad camping games that blended Wild West romance with made-up Indian lore. These ranged from woodcraft sessions and dramatizations of the Oregon Trail to more competitive (and blatantly racist) group games such as “white man and Indian” or “n[word]-in-the-hole” through which white youth were supposed to acquire a sense of racial superiority.[vi] Monitored by their elders, the youngsters acted out, while also literally playing down, past and present patterns of oppressive violence. 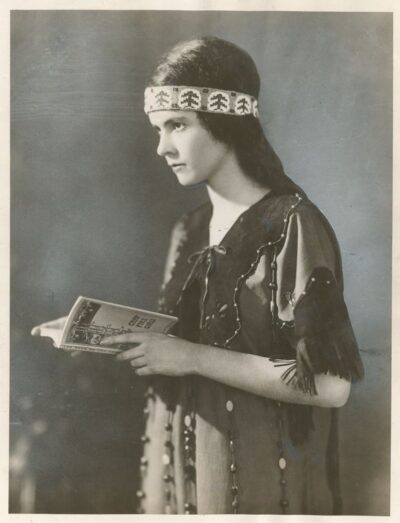 Such examples underscore that concepts of childhood forged within the contexts of adult-supervised play could be used to advance decidedly unchildlike objectives: to moralize, universalize, even naturalize hierarchies of race, class, gender, and age. With the exception of a few self-styled radical alternatives, summer camps in the interwar years (and up to the 1970s in parts of the South) practiced segregation, denying equal access to youth of color. Mainstream campers were inclined to associate black and brown boyhood with deviancy and immaturity rather than the potential for leadership. Disparities of wealth and income punctuated the campers’ rhetoric of democratic inclusiveness. At the same time that affluent (sub)urban parents were thinking about how and where their children should spend their summer vacations, rural and working-class families had to rely on the labor of their younger members. The growth of girl organizations, most prominently the Camp Fire Girls and the Girl Scouts of America, led to more camping opportunities for young females. However, the programs they developed struggled to reconcile a demand for modern femininities with the traditionalist desire to confine girls to their future reproductive duties as wives and mothers.[vii] Furthermore, camp regulations contributed to the general trend of slicing childhood and youth up into distinct age cohorts and developmental stages. Jointly enforced by young and old, camp-specific age hierarchies gave older teenagers special privileges like staying up longer or running sports teams as well as limited supervisory authority over younger “Middlers” and “Midgets.”

Once they had been incorporated into the country’s foreign policy arsenal, the political productivity of summer camps aided the empire- and nation-building initiatives of the twentieth-century United States. As part of the larger effort to colonize and “pacify” the newly acquired Philippines in the 1910s, soldiers, teachers, and missionaries dispatched to South East Asia worked with indigenous youths in American-style summer camps, aspiring to turn them into loyal subjects of the empire. After 1945, similar schemes surfaced in defeated Japan and Germany. Proponents of reeducation discerned in the children of their former enemies a key demographic, especially when it came to projecting the image of the United States as a benevolent and caring victor.[viii] Inviting local boys and girls to participate in camping exercises run by the US military and its civilian auxiliaries sent out a mixed message: overriding painful memories of children dying in concentration camps and anticipating a budding international alliance against the communist menace, such conciliatory gestures also cemented a quasi-colonial relationship that cast the occupiers as schoolmasters of democracy and the occupied as willing students.

By the early Cold War, the face of camping had already changed dramatically. Gone was the rusticity and simplicity of turn-of-the-century nature excursions, and the cadet-like, masculinist principles that had guided the first generation of boy workers had given way to a greater appreciation of coeducational systems of socialization. Consumerism and professionalism had prompted a series of innovations, from the construction of elaborate sleeping quarters and sanitary facilities to the embellishment of campsites with modern forms of entertainment, including movie theaters. In the second half of the twentieth century, with the emergence of skill-based camps teaching foreign languages, music, and computer programming, the mastery of modern technology became as much a part of camping curricula as traditional conquest-of-nature values. These postwar shifts, to be sure, were never uncontested, provoking pushback from conservative educators who, much like their Progressive-Era forerunners, feared that a growing disregard for hardy outdoor adventure had made young people soft and effeminate. In trying to revive summer camping’s imperial pedagogy, they harkened back to a ludic approach to empire that had gained a mass following decades before the computer-game revolution of the 1980s and 1990s served its very own, allegedly child-friendly diets of nationalism and militainment.

[iii]  Given the encyclopedic nature of this essay, it will have to limit itself to offering a top-down account of the interwoven histories of summer camping and empire.

[v]  For the US-American case, see Gail Bederman, Manliness and Civilization: A Cultural History of Race and Gender in the United States, 1880-1917 (Chicago: University of Chicago Press, 1996).

My Archival Adventure as an Academic Researcher across the Atlantic
Racializing “Muslims”: Constructing a Muslim Archetype
Review: BGEAH and BrANCH Postgraduate and Early Career Conference 2018
Book Review: Constructing Presidential Legacy: How We Remember the American President by eds. Michae...
Book Review: Against Self-Reliance: The Arts of Dependence in the Early United States by William Hun...
60 Seconds With Rachael Mclennan
American Women Writers and Wars on Foreign Soil—Part One
'Women of Genius': The ‘Revolt from the Village’ in Mary Austin and Willa Cather's Fiction

Mischa Honeck is Professor of British and North American History at the University of Kassel. Spanning two centuries, his contributions to a burgeoning "America and the World" scholarship engage with the histories of race, ethnicity, gender, childhood, youth, and empire. He is the author of two monographs: We Are the Revolutionists: German-Speaking Immigrants and American Abolitionists (Athens, Ga: University of Georgia Press, 2011), and Our Frontier Is the World: The Boy Scouts in the Age of American Ascendancy (Ithaca, NY: Cornell University Press, 2018). His current book project, tentatively titled No Country for Old Age: Rejuvenation in American History, traces various discourses and practices of anti-aging from the founding period to Silicon Valley's transhumanist elites. Twitter: @HoneckMischa
View all posts by Mischa Honeck →
Tagged  Native Americans, Spaces of Empire Series 2020.
Bookmark the permalink.